Before we crossed into Yogi Bear and Boo Boo’s territory of “Jellystone”, our spirited little group stopped at a place high in the mountains called the Pahaska Tepee. We’d hit an unexpected rainstorm and even hail as we crested Cody Peak and headed down the mountain to the resort. Still raining fairly hard when we arrived, we made a mad dash for the gift store where we amused ourselves among the aisles of trinkets and waited for the rain to let up. 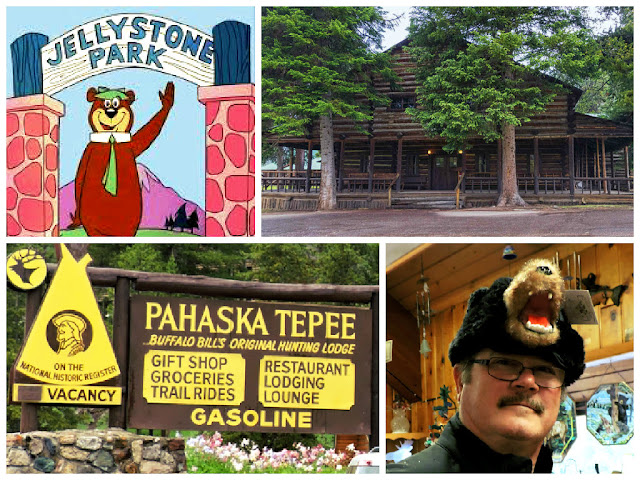 Taking advantage of a break in the rain, we ventured out to look at the picturesque log cabin resort. Nestled against a backdrop of thick forest, towering mountains and endless sky, the setting is as peaceful as it is beautiful. The smaller cabins are grouped around an old two story log cabin that we discovered is Buffalo Bill’s 1904 hunting lodge. Located about two miles from the east entrance into Yellowstone National Park, Buffalo Bill chose the site with the intention of capturing the tourist trade into the park. Cody also used it as base camp for hunting expeditions hosting illustrious guests like Teddy Roosevelt and the Prince of Monaco.

“A pic-a-nic basket has everything a bear needs, Boo Boo!” 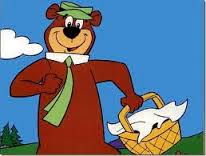 In honor of Yogi Bear and Boo Boo, we had our own “pic-a-nic” lunch on the bus as we made our way into Yellowstone National Park. While munching on sandwiches and plate sized cookies, we quickly see why Yellowstone is a favorite for nature lovers. The views from our large windowed bus unfold like a cinematic movie: buffalo and elk grazing in the meadows, a mother grizzly and her cub scampering out of sight over a distant ridge. We are as excited as kids watching fireworks on the 4th of July!

It doesn’t take long to understand what it really means when they say that Yellowstone is sitting on a slumbering super volcano. Again and again during our visit we saw boiling cauldrons, caves belching hydrogen sulfide gas that smells like rotten eggs, and countless geysers spewing scalding hot water high into the air. Just 30 miles under the surface of Yellowstone and covering 300 square miles, is a magma “hot spot” which is so intense it boils water like a witches brew. According to scientists, if this sleeping giant decides to blow (and the predictions are that it will happen sooner rather than later) it will cause severe damage over most of the US. Fortunately for us it held off blowing its stack while we were, leaving us free to enjoy the extraordinary beauty and peaceful terrain. (map courtesy of Google) 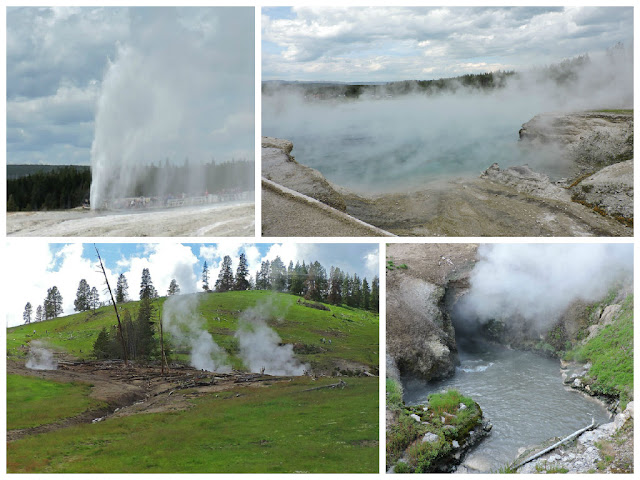 Yellowstone National Park sits on top of a caldera, a gigantic volcanic crater.
A caldera is caused by the collapse of the mouth of a volcano following a massive eruption.
This sleeping dragon continues to breath fire over a 300 square mile area. Like
Old Faithful geyser, the super volcano erupts faithfully every 600,000 years or so. 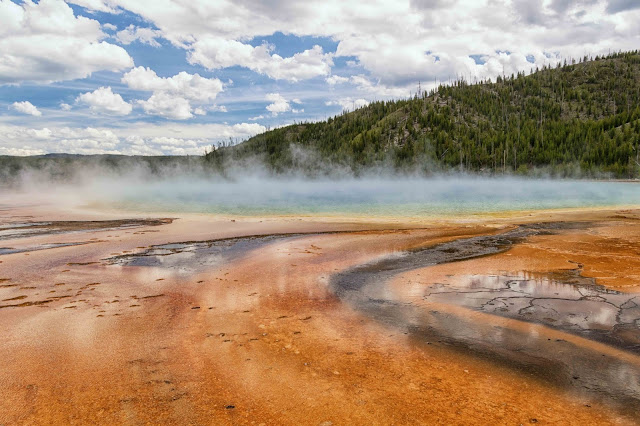 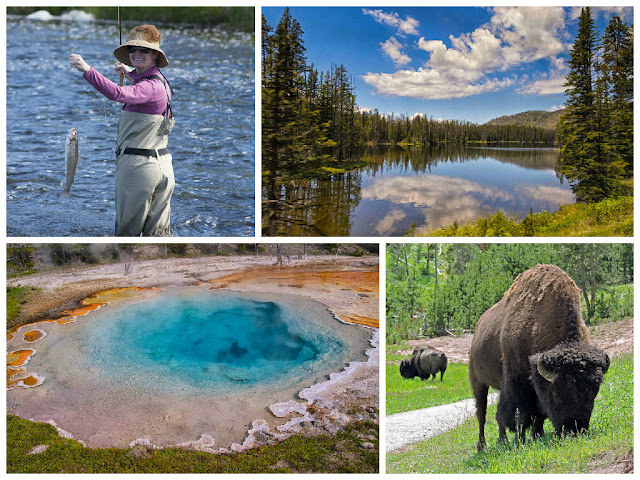 It's easy to see why people spend whole summers here. The recreation is almost limitless:
fishing, canoeing, hiking, river rafting and just plain hanging out enjoying the
beauty of nature. (Upper right: Yellowstone Lake, upper left, my daughter, Audrey, happily catching fish this summer in one of the many rivers and streams in Yellowstone.)

Of course, everyone who comes to Yellowstone has to see Old Faithful, the hot water spout that blows off steam so regularly one could almost set their watch by it. However, the best show of the day wasn't the old geyser itself, but its neighbor that took center stage! While we settled down and waited for Old Faithful to do its thing, our attention was drawn to what was happening behind us. Rising spectacularly high into the air, to whoops and laughter of the onlookers, this scene stealing geyser gave us all a show never to be forgotten. A large group of people had gathered to see it go off, but they didn't calculate the direction of the wind. When it erupted, it drenched anyone standing anywhere close to it! I will always regret I didn't take a video of the fun of watching people trying to run away. A couple from our group were among the ones soaked. When asked if the water was hot, they both said, "No! It was like taking a cold shower!"

Named The Beehive Geyser because of its cone shape, the geyser erupts only about
once or twice a day on its own schedule. It often out performs Old Faithful for giving
a spectacular show, rising 200 feet in the air and lasting at least 5 minutes.
It certainly gave us a show we'll never forget!

We saw many amazing sights over the two and a half days we toured Yellowstone and I wish I could show pictures of every one. It was very hard to pick and choose what to show, but this next video is a great example of the boiling cauldrons the visitor will find all over the Park.

Our home base while touring the Park is actually across the border in Idaho in a village called West Yellowstone. We were only there in the evenings, but it was enough to have a couple of great meals and see a play at the local summer theater called Playmill Theater. From the moment we walked into the door, we were entertained. Treated like VIPs, audience members are ushered personally to their seats by one of the charming cast members while others, sometimes crawling over seats, plied the audience with drinks and sweets. While we waited for the curtain to go up, the actors got us in a merry mood by singing and dancing in a delightful pre-show. Their season consists of three shows and we saw "The Foreigner". The mostly young cast gave us an admirable performance and a thoroughly enjoyable evening! 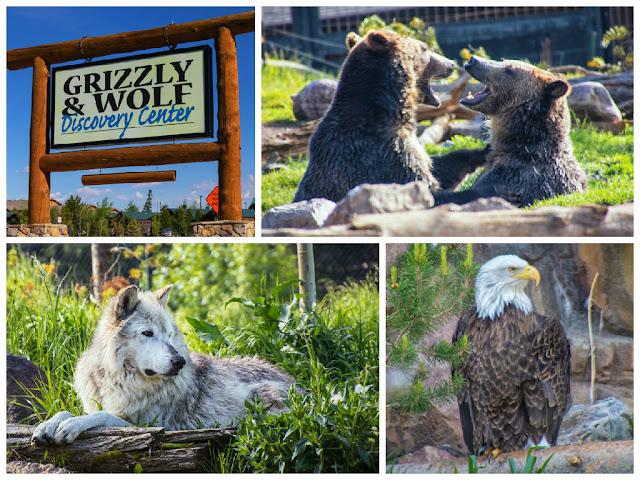 Some of us spent one morning at the Discovery Center in West Yellowstone. The Center
features rescued bears, wolves and a collection of birds along with a museum.
Their message is that humans and these magnificent animals both have an important
place on this earth and we must work to establish a balance in nature. It is well worth
seeing and supporting. (Pictures courtesy of Larry Miner) 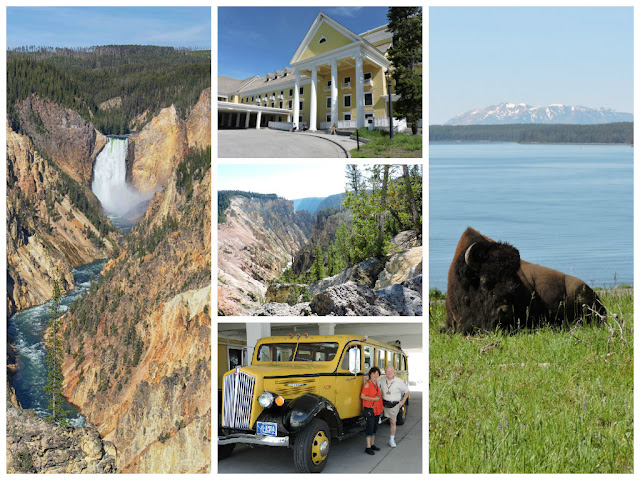 Yellowstone National Park has its own mini grand canyon complete with a spectacular
waterfall called Angel Falls. (Picture courtesy of Larry Miner)
On the way out of the Park on our last day, we stopped at the bottom part of
Yellowstone Lake called West Thumb (see map). It is the remnants of a huge crater
left by the last eruption. While there we visit an historic hotel located across the street
and are treated to a sleeping buffalo on the front lawn. Ken and Isabelle (members of our group) pose next to one of the original Yellowstone touring cars that are still in use.

Next Time: The Grand Tetons!

**For a full screen view of the pictures, double click on any one.

Posted by theworldaccordingtobarbara.com at 2:45 PM