WALKING WITH GHOSTS IN CHARLESTON 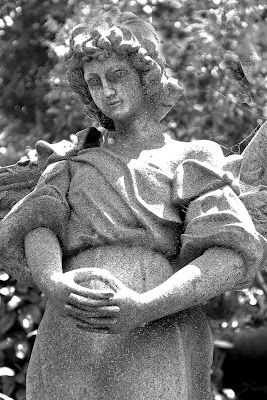 The South is full of ghosts. When I booked this tour of the gracious southern states, who would have guessed I would also be venturing into a world of restless spirits who refused to leave? I guess the question is:  who says they have to?

It was the end of the first day of the tour and I was tired. But, Courtney and Leeza had invited me to go with them on a Ghost Walk around the streets of Charleston later that night and I was not going to miss that! After downing my third cup of coffee, I met them in the lobby of our hotel and we set out to find Washington Square Park located in the heart of old Charleston where the tour was to begin at 9:30pm. We walked for several blocks getting turned around a couple of times making us a few minutes late for the tour. Finally after one or two calls for directions, we entered the dimly lit park and approached a small gathering huddled together intently listening to the mesmerizing voice of Michael Brown, our guide and co-owner of Old Charleston Walking Tours.

As we joined the group, we heard Michael say, “…Charleston was founded in 1670 and knew slavery, pirates, brigands and wars so you can understand that there may be many souls who died unexpectedly here over the years leaving unfinished business. As we walk, I’ll tell you some of the tales of these restless souls.”

Michael led us down the narrow old streets, through darkened alleyways, around ancient church graveyards, entertaining us along the way with story after story of the apparently very active spirit life of Charleston. The unexpected bonus is that as we slowly walked past the facades of the antebellum homes in the soft light of the street lamps, the lanes empty of bustling tourists and traffic, I realized that this was the perfect way to truly experience this fine old city. With delicious guilty pleasure we had the time to peek through iron gates into secret and tranquil gardens and appreciate what it may have felt like to live here two centuries ago.

After an hour of wandering in the southern night air that felt like silk on my skin, we stopped at St. Phillips Church graveyard where our soft spoken guide pointed out a grave. “On June 10, 1887, Sue Howard Hardy died giving birth to an infant daughter who died soon after. Exactly 99 years later to the day, a couple took this picture of the grave-site.” With that Michael unfolded a large photocopy of a photograph showing a ghostly image of a woman kneeling at the same grave he had just pointed out.

“This is grave of Sue Howard’s baby. Is this her ghost mourning the child she never got to keep? You be the judge.”

With that, we were free to walk back to our hotel through the dark and deserted streets of Charleston to contemplate the lives of ghosts and trade experiences of  encounters with the spirits of our own dearly departed loved ones.... 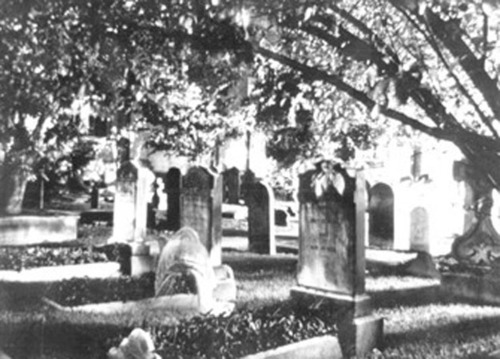 Next time: Beaufort, "Queen of the Carolina Sea Islands"

Posted by theworldaccordingtobarbara.com at 5:45 PM No comments: 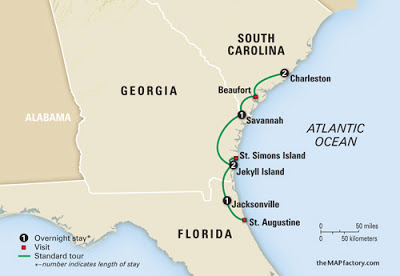 Rhett, where are you?? Rhett?!

Some of my earliest memories are of my grandmother telling stories of the plantation her great grandparents owned in Georgia sometime before the Civil War.  Since then, I’ve always wanted to visit one and imagine what it must have been like to live like Scarlett O’Hara in “Gone with the Wind”. Boone Hall Plantation was just what I envisioned.  Perfectly placed at the end of a road lined with a canopy of mature live oaks dripping in Spanish moss is an elegant white columned manor house. And as if to complete this unbelievably beautiful setting, there are even thoroughbred horses grazing lazily nearby! 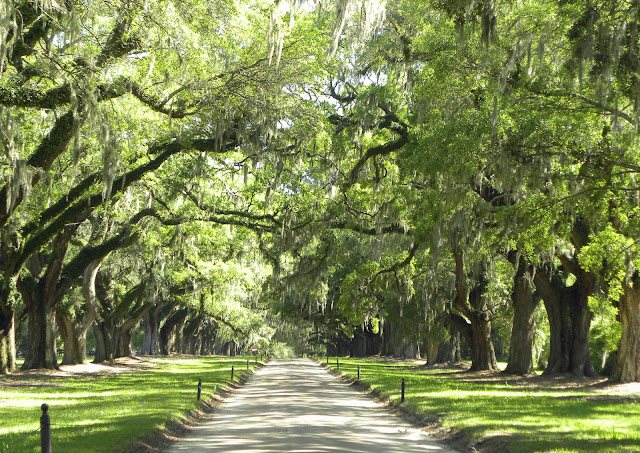 Avenue of Oaks, the view on the way into Boone Hall Plantation,
created in 1743, completed in 1843 it is ¾ of a mile long. Can you imagine riding
in a carriage to attend a cotillion through that? 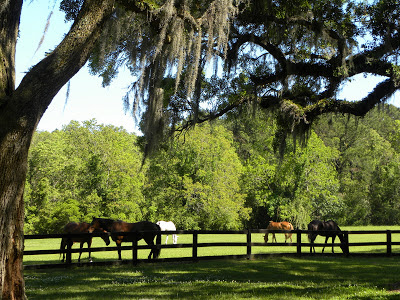 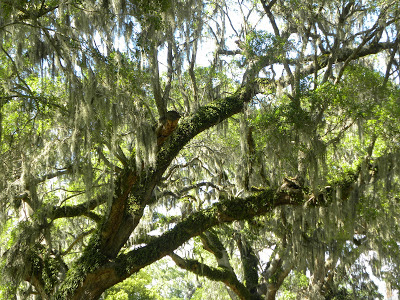 Spanish moss, named because it looked like the flowing beards of the Spanish conquistadors. Spanish moss isn’t moss at all, more like an “air plant”, getting its nutrients from the air and rainfall, and is related to the pineapple! It is soft to the touch and full of bugs! 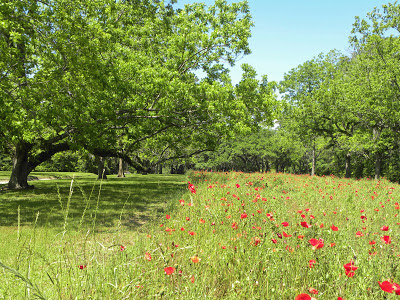 A field of poppies along the Avenue of Oaks. Is this gorgeous, or what?


Boone Hall Plantation is located 10 miles outside of Charleston in Mount Pleasant, South Carolina and is the oldest working plantation, continually growing crops for 320 years. In 1681 a land grant was issued to Major John Boone as a wedding present from his father-in-law, but the first home wasn’t built until 1790. When Thomas Stone bought the property in the 1930’s he wanted something a bit grander and built the large Colonial Revival manor we see today.

On our tour of the house, our docent pointed out, “Most plantation homes were typically modest and were lived in by the plantation manager. The owners and their families lived in town so they could socialize with the local gentry.” OK, so much for living like Scarlett on the farm.… 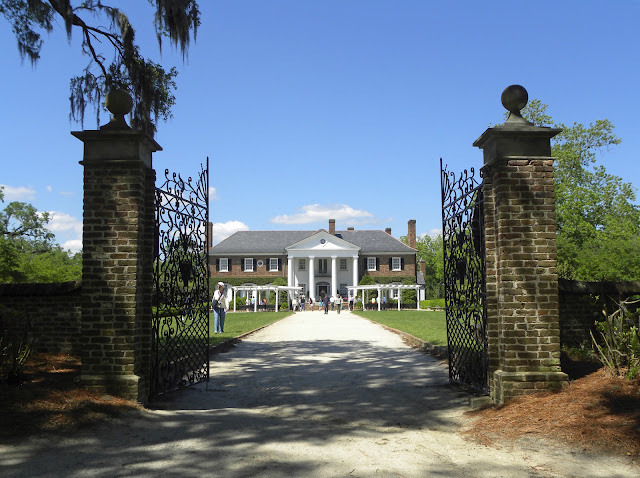 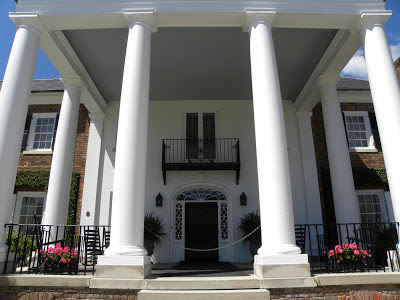 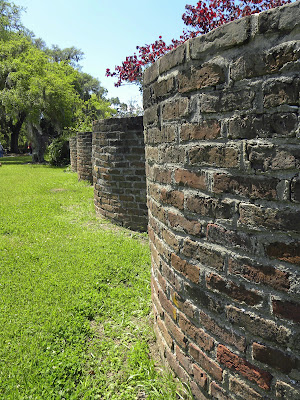 Brick wall made from the clay in the tide pool beside the manor. 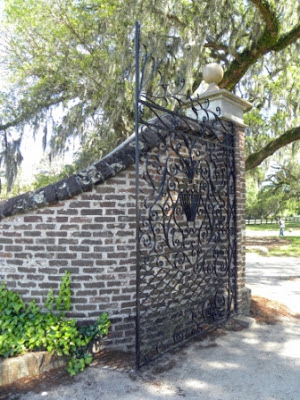 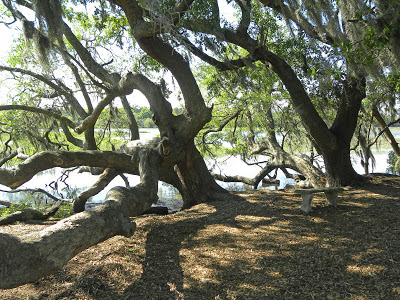 The plantation is next to a large tide pool and one of its major industries was brick making. When the tide was out, slaves cut the bricks out of the exposed clay. Fort Sumter is made from 70% Boone Hall brick as well as the slave quarters on the plantation.

My grandmother also talked about how many slaves the family owned, which clouded my romantic fantasies of plantation life. Reminders that the plantations were worked by slaves are represented by the few modest brick dwellings running alongside the impressive tree lined entry way to the grand home. In front of one the slave quarters, a descendant of a plantation slave, Jackie Michaels, gives a moving and memorable presentation in the dialect of her ancestors about the Gullah people, their traditions, their family life, their language and their secret yearning for freedom. 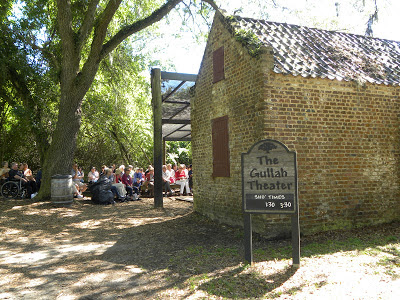 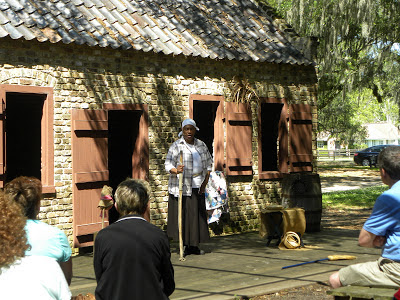 Jackie Michaels during her very moving presentation of Gullah life on the plantation. 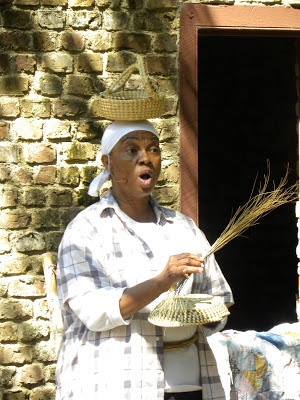 You see deeze fine brick buildins? You be livin’in sumpin dis nice, you be a capintah, a hohseshoe man, or wohkin for da mahn ina big house as cook or housekeepah. Mose slaves, deh live inna board house wif a dirt floor and no winda—two, three family livin’ in it, mostly livin’ outside. Da field slave, he wohk and live in da fields. Gullah, a people. Gullah, a nation.

Listen ya, my people did as bes' deh could. Men, women, deh got ‘hitched’ by jumpin’ da broom but knew ana day, chilren, wife an husband could be sol’ from each otha. We sang songs secret from da mahn;  ‘Swing Low' be ‘bout da undehground railroad, and all kinda like. We make ‘gulla basket’ from sweet grass and pine needle fo colah. We make do. ‘Cause we are Gullah, a people. Gullah, a nation!”

Jackie’s presentation is one I will never forget. She is a true artist and storyteller, one who will capture your full attention and respect. Her performance was one of the highlights of the trip.

Next time: Walking with ghosts on the antebellum streets of Charleston!

*Click on any picture for a full screen view.

Map of the Southern Charm Tour courtesy of Collette Vacations
Posted by theworldaccordingtobarbara.com at 12:43 PM No comments: