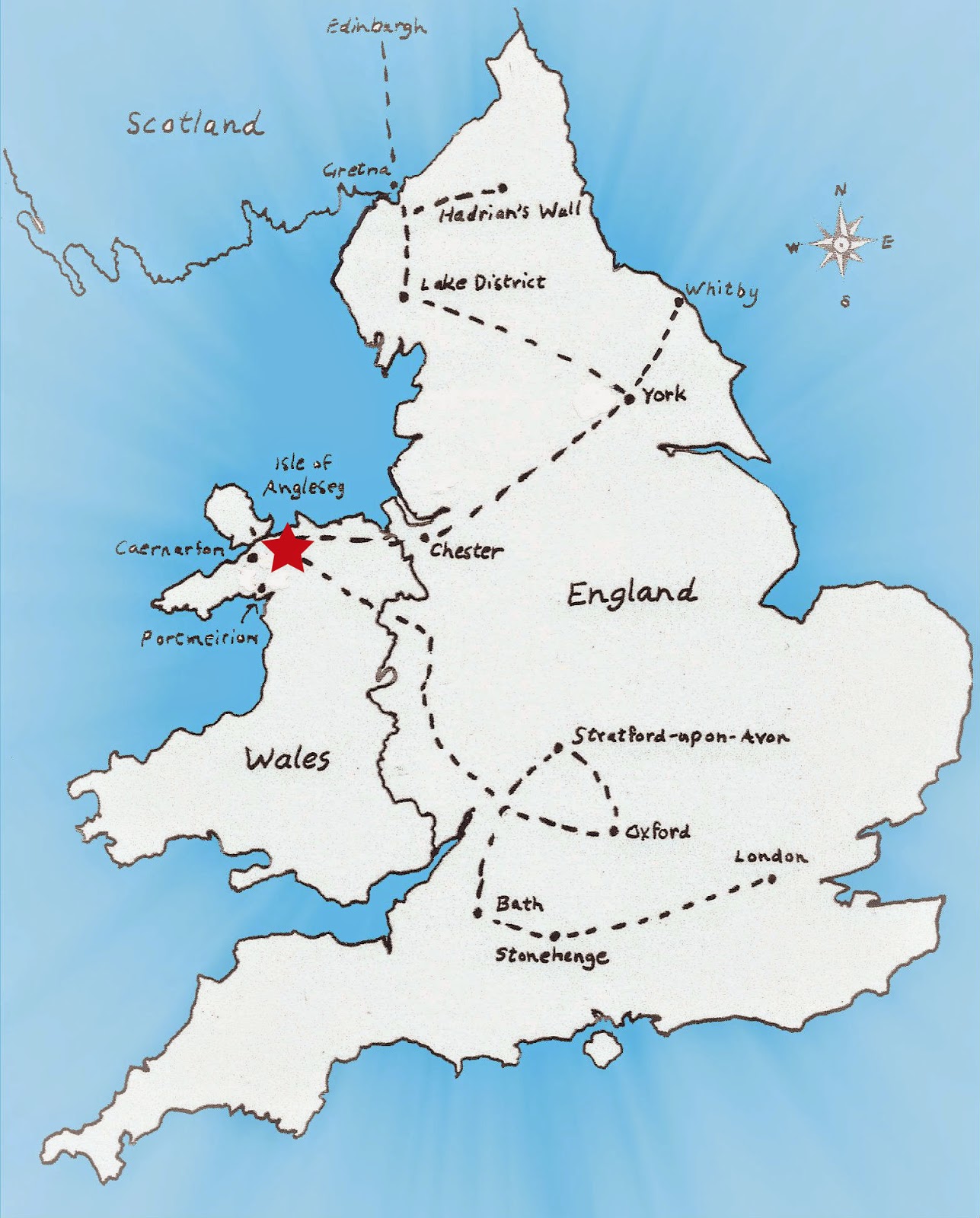 What can I say? I'm in love with Wales. Like Scotland, Wales is a land of fiercely independent Celts who were driven into the highlands many generations ago by successive invaders. It is a rugged landscape of incredible beauty, peppered with thousands of sheep clinging tenaciously to steep emerald green pastures. Interspersed with miles of purple heather on the moors, the views are breathtaking.

I’d made good friends with a wonderful couple on the tour, Paula and Chuck whose playfulness and engaging sense of humor kept us all laughing. We’d been assigned seats that rotated daily around the bus so that I either had a good view of the backs of their heads or they had a great view of the back of mine so we had plenty of time to get acquainted on the trip. To this day we still miss the backs of each other’s heads.

Our first stop in Wales was Llangollen (LANG-o-lin) where Chuck had arranged to meet his cousin Judy who lived in a nearby town and whom he hadn’t seen in many years. Paula discovered she had accidentally left her camera in Cheltenham (CHELT-n-um) so I volunteered to be their photographer until it could be sent on. They invited me to lunch with Cousin Judy at one of the nicer places in town called The Royal, which was built overlooking the picturesque River Dee. Chuck and Judy were so happy to see each other and it was a pleasure to take photos of them catching up on old times. After lunch I excused myself so they could have some time to themselves and set out to explore my first Welsh town.

The Isle of Anglesey

After leaving Llangollen we drove across Wales and over a bridge to the Isle of Anglesey.  Anglesey (an-GEL-see) has become famous lately because Prince William is stationed there on a large military base and Kate can be seen doing her own grocery shopping. It also has a town with the longest name in the world, I think, having a grand total of 58 letters. It beats the one in Llangollen by 3. You wonder when they know to take a breath!

We continued on our way to Caernarfon, (ca-NAR-fon)located on the northern coast of Wales, and home of the medieval Caernarfon Castle built after the English conquered Wales. It had been a long day of driving, but one of the best parts of the trip was yet to come. We were scheduled for a special treat, an evening with a Welsh family and a good home cooked meal. We were divided into small groups each going to a different home. A taxi was arranged to pick up my group which consisted of Frank, Pat and her husband Bill, Ruthie and Steve and I. I settled in for what I thought was going to be a long ride, but after just a few blocks the taxi stopped in front of the Castle. The cab driver said, "Right then.  Straight through there." indicating a dark opening in the Castle wall. Looking at each other as if to say, "Huh?" we huddled together and shuffled forward into what looked like a deserted alley. Once we went through the entry way we could just make out a row of small attached homes in the dim light with  doors to each just a few feet from one another. Just as we started to look back at the taxi driver to plead for some direction we saw a door open flooding the lane with warm golden light and excited happy voices. Out bounded a black dog the size of a small horse that acted like we were the Magi bearing dog bones followed by a plump apron clad woman with a beaming smile saying, "This way, Loves!"

Monica and Pete, along with their children, were our hosts and I couldn’t have imagined a more delightful experience. We laughed and talked and ate until we couldn't move and none of us wanted to call it a night. Their home had been Monica's mum's (they lived around the corner) and it was tiny with barely any room to move around so we didn’t even try. How Monica could make and serve the outstanding dinner she did in such a small space was amazing, but we didn’t question it as we stuffed our faces with Cottage Pie (made with beef—Sheppard’s pie is made with lamb), mushy peas, boiled potato and cabbage and took second helpings on the most divine trifle I’ve ever tasted. I had to stop myself from being a pig and taking more.

After dinner the conversation centered around Wales and the Welsh language. Monica explained, "We have our own flag here in  Wales and Welsh is taught in the schools. We're determined to keep our language, culture and identity alive, you see. Pete and I, we're from England , but our children were born in Wales and are bi-lingual. Come here, son and read something in Welsh for us." Their son was about 10 years old and when he spoke English I thought he may have had a speech impediment, but when he spoke Welsh I realized he had been carrying over Welsh sounds into his English pronunciation. Welsh has some very distinct vowels and consonant sounds, and the one I heard particularly in the boy's speech was a unique slushing sound.(I felt very urbane after that when I could pick Welsh out of the cosmopolitan mix of languages I heard around me because of those distinctive sounds.)

It was getting late and time to leave, but it was with great reluctance we said goodbye to these new friends who had made us feel so welcome in their country and in their home.

Next time: More of Wales--Portmeirion and Sean
Posted by theworldaccordingtobarbara.com at 10:44 AM