A WEE TOUR OF SCOTLAND 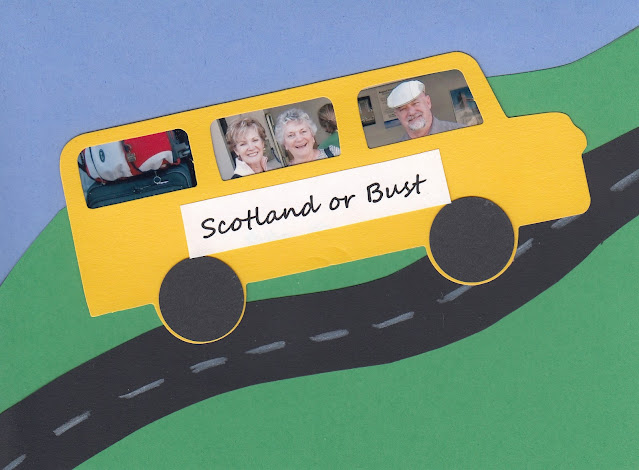 A few years back, my close friends, Kay and Tom Law, and I toured Scotland on our own. It was my first trip to the UK and it ignited a passion for this historic island that only grows with time. The following is the tale of our romp through the heathered highlands, visiting the haunts of Robert the Bruce, MacBeth, Robbie Burns, and eating our fill of steak and ale pie!

Kay, Tom and I boarded our Continental flight in San Francisco with ear to ear grins. We were so high with anticipation that it didn’t daunt us in the least to know that between the time change and our stopover in Newark, NJ our flight to London would take 24 grueling hours. The only worrisome thing was the weather. It was late in August and Hurricane Bill had come up the Eastern coast of the US and then hung a right headed straight toward Scotland. We’d packed for nonstop rain just in case, but hoped for the best.

This was the Law’s third trip to Scotland (my first) and they had invited me to join them in exploring new places and places that merited visiting again. I was more than happy to let Kay be our tour guide and Tom our driver through this land of our ancestors, the Stewarts, Sutherlands, and McClarens. We planned to spend three days in Edinburgh to see the sights, but the main event was to attend the Military Tattoo, an annual extravaganza that culminates a month of citywide festivities. Afterwards, we would rent a car and drive to the timeshare they had booked for us in Kenmore on Loch Tay, 80 miles NW of Edinburgh. Kenmore would be our base camp while we toured the surrounding countryside.

We arrived 24 hours later and sure enough, it was pouring rain! After checking into our hotel, we kitted out in our raincoats and umbrellas and headed off with a vengeance to explore the city. Walking up Princes Street and King Stables Road, we stopped at St Cuthbert Church and graveyard, the oldest church site in the city. Majestic Edinburgh Castle towers over the site and seems to stand guard over the ancient graves. Over the next few days, we saw many of the romantic sites so iconic to Edinburgh—Edinburgh Castle, Holyroodhouse Palace where Queen Elizabeth II stays when she’s in town, and Grassmarket just to list a few. (For a more in depth tour of Edinburgh, read my blogs, Edinburgh, published on March 10, 2013 and Edinburgh Castle, Holyroodhouse Palace and Haggis, published on March 17, 2013.) 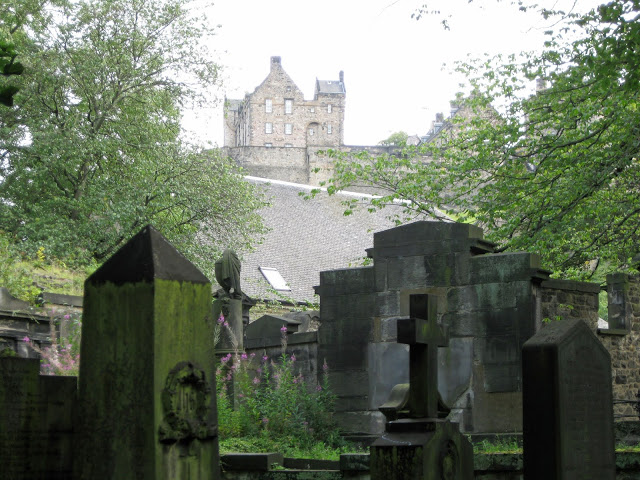 St. Cuthbert Church and graveyard with Edinburgh Castle in the background. 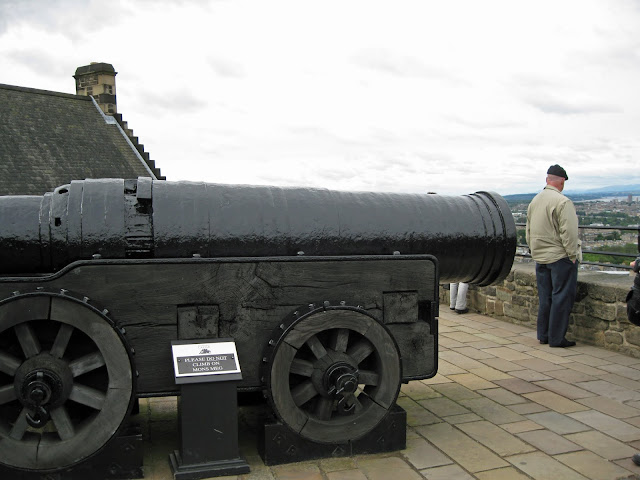 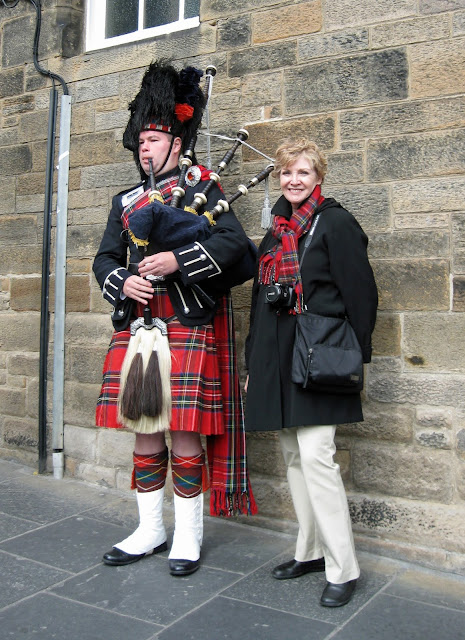 Gotta love a man in a kilt with a bagpipe! 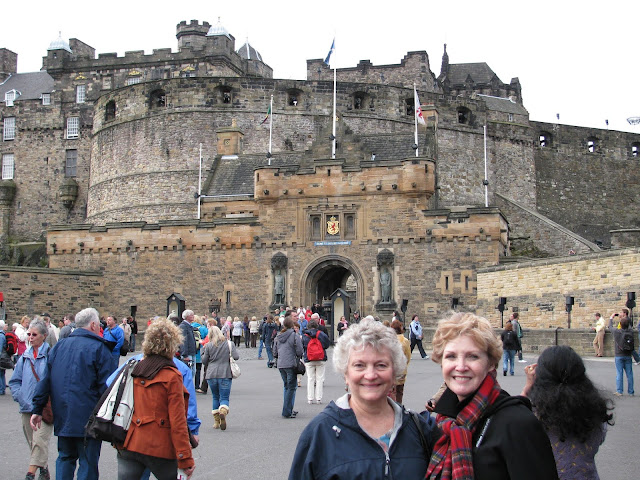 Kay and I before touring Edinburgh Castle.

Statues of King Robert the Bruce and William Wallace (Brave Heart) are proudly ensconced at the entrance. Both national heroes to the Scottish people.

What in the world is a “tattoo” you may well ask. Well, officially it is: "The term "tattoo" derives from a 17th-century Dutch phrase doe den tap toe ("turn off the tap") a signal to tavern owners each night, played by a regiment's Corps of Drums, to turn off the taps of their ale kegs so that the soldiers would retire to their billeted lodgings at a reasonable hour. With the establishment of modern barracks and full military bands later in the 18th century, the term "tattoo" was used to describe the last duty call of the day, as well as a ceremonial form of evening entertainment performed by military musicians.” In modern terms, it has become an international extravaganza and the most exciting thing I have ever seen! Hundreds of plaid skirted men drumming in sync with the majestic torch lit Edinburgh Castle making a dramatic backdrop for the thrilling beat of the drums. People come from all over the world to see bands and performers from all the UK Commonwealth and the place was packed.

Tom, Kay and I made our way to Edinburgh Castle for the Tattoo along The Royal Mile (Edinburgh's main street), which was packed with thousands of international visitors attending the annual festival and Military Tattoo. It felt like we had gone back 300 years and were attending a medieval fair. The street was lined with renaissance style tents stocked with wares and street performers drawing festive crowds.

Once inside the performance area of the Castle, we hunkered together to enjoy the show under blankets to try to keep the cold wind out, but there was no rain during the performance, thank heavens!

Click on the link to see a short clip of one of the Tattoo performances: 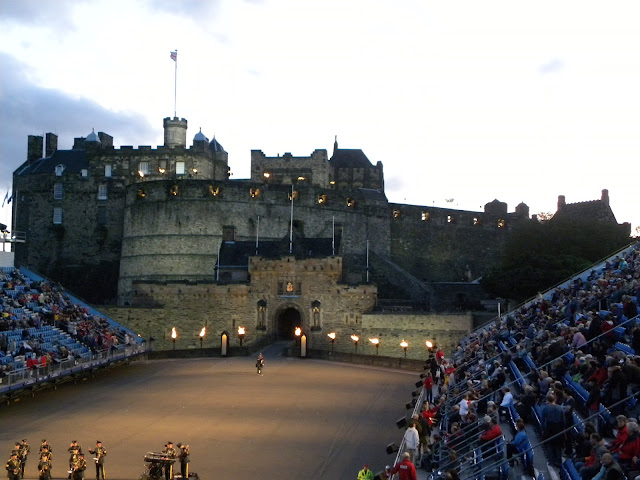 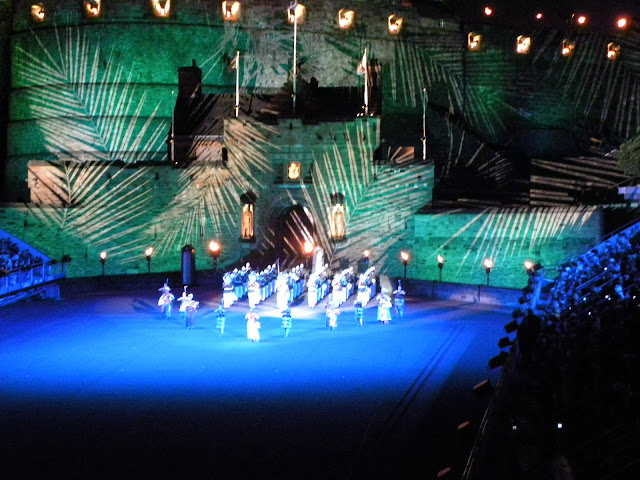 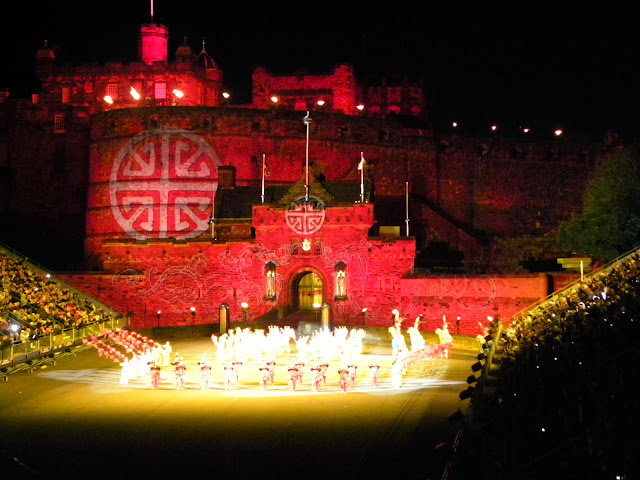 Unfortunately these pictures can't come close to capturing the magic and majesty of the Tattoo, however they do show how effectively the Castle is used as a giant screen for the background scenes. It was an incredible sensory experience that I hope someday you will be able to experience yourself!!

Next time: Kenmore and Lock Tay