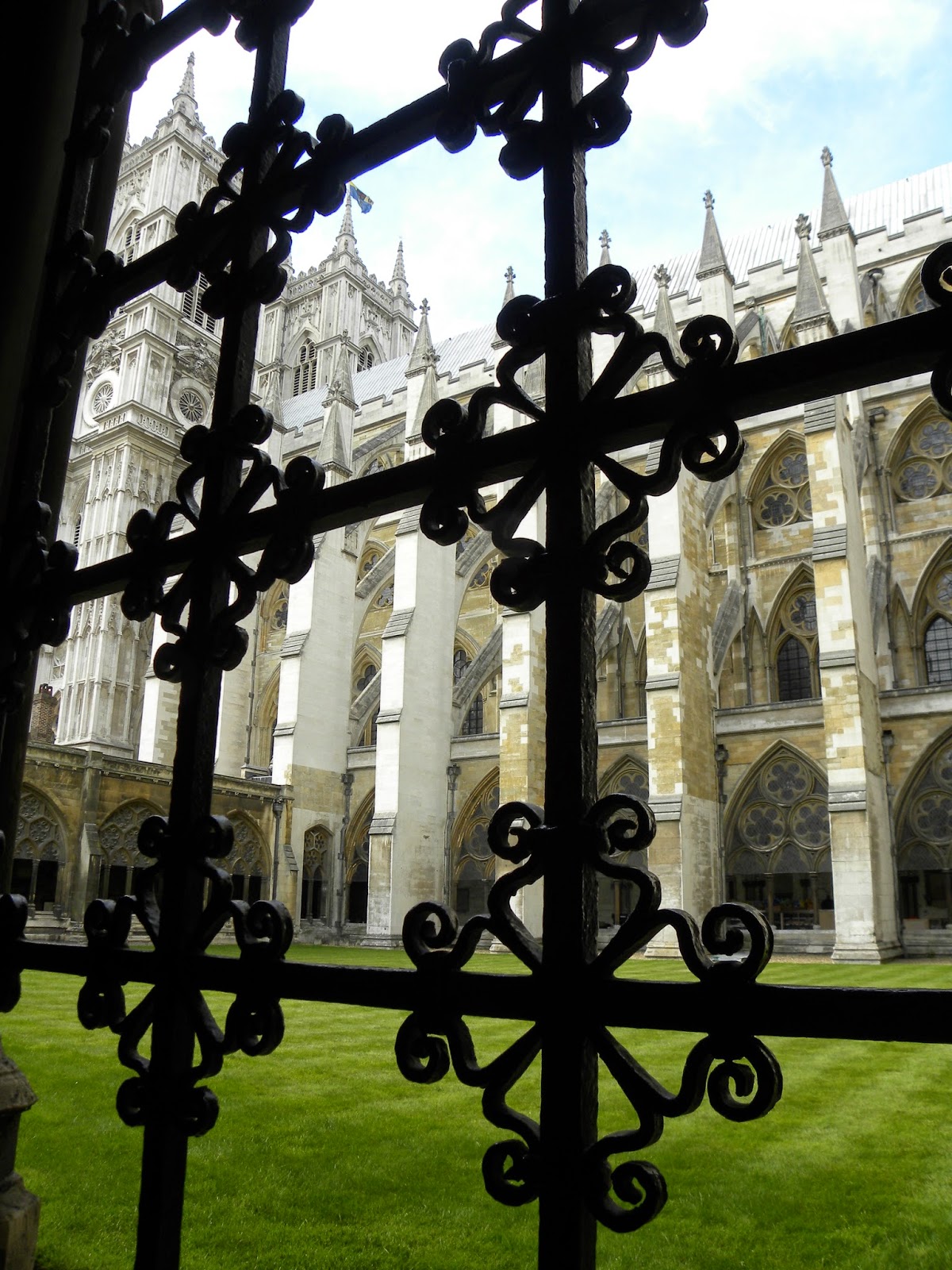 Westminster Abbey does what it was intended to do: inspire awe and reverence.
Ancient, it is filled with the ghosts of greatness, yet it is also history in the making.

When I first saw the Abbey, I was struck by how old it was. It looked every bit its 1,000 years on earth with its sharply pointed Gothic arches and sturdy flying buttresses festooned with grimacing gargoyles to scare off evil spirits.Then as I walked around the Abbey I saw it had been built in stages, making it look almost like two different churches. William the Conqueror, having built it, was one of the first to use the north entrance pictured below for his coronation on Christmas Day in 1066. The newer west entrance was added in 1745 and was used by Queen Elizabeth II when crowned Queen of England, and recently by Kate and William when they married. 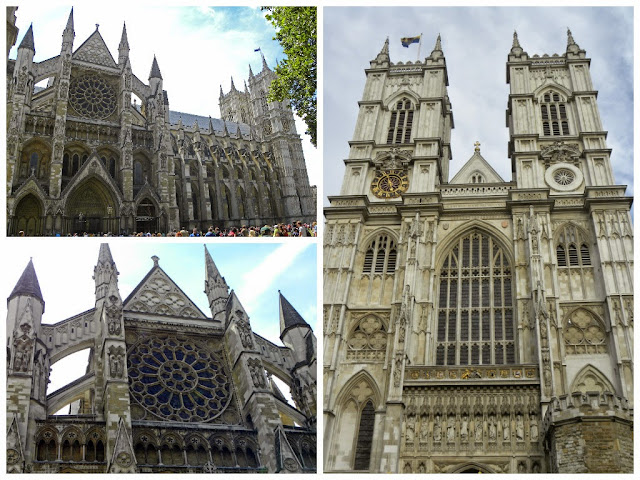 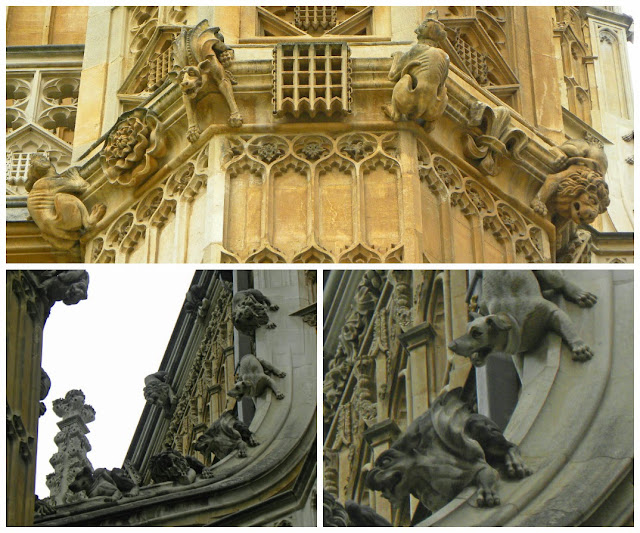 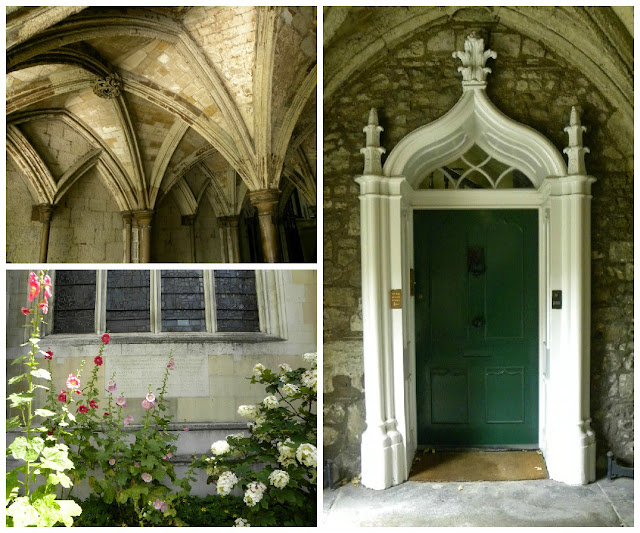 Abbey grounds. The Abbey was first established by Benedictine monks in 960.
Upper left is part of the original ceiling in the cloisters.

The Crowning Chair
﻿
Why the Abbey is such a treasure, however, didn't hit me until I went inside and saw the thousands of tombs and monuments. Amazed, I read name after name chiseled in marble of some of the most famous people in history. Among the 3,000 buried there, the most notable are Queen Elizabeth I and Mary Queen of Scots (ironically buried across from each other), plus no less than 16 kings. Then there are the giants of science and literature: Chaucer, Charles Dickens, Darwin and Sir Isaac Newton, just to name a few. Knowing that I was walking on the graves of people who shaped our history was astonishing enough, but remembering the world changing events that took place here over the last millennium (royal marriages, burials and coronations, for example) made me realize that Westminster Abbey has to be one of the most important places in western civilization.

Even with all that, it was the Coronation Chair I couldn't wait to see. But, my excitement quickly turned into disappointment when I saw that it was completely inaccessible. It is set so far back behind a thick pane of bullet proof glass that it seems insignificant and small. Frustrated, I almost walked away when I noticed the large rectangular shelf under the seat. Wondering what it was for, I fortunately took the time to read the sign explaining that King Edward I had ordered the making of the Coronation Chair in 1296 to specifically hold the prehistoric crowning stone of kings known as the Stone of Destiny. But, the stone was missing...! 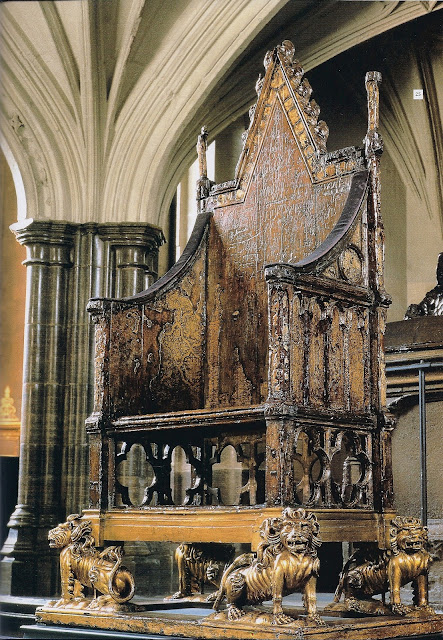 I was beyond excited because not only did I know where it was, I'd seen it. The last time I toured Scotland I saw the Stone of Destiny at Edinburgh Castle and had been very impressed by its importance to Scottish identity and heritage. I'd even visited Scone Palace where it had been in a place of honor for centuries. Every Scottish king, Macbeth included, had been crowned while sitting on it. The Stone held such symbolic importance that Edward I took it in 1308 (or as the Scots tell it, stole it) to prevent Scotland from having its own kings in the future. It remained in England until the Stone was snatched by two daring Scottish college students in 1950 prompting negotiations to return it permanently to Scotland. Finally returned with great ceremony in 1996, it will now only be borrowed to fill the shelf under Edward's chair for future coronations.
The Crowning Chair used for every coronation since 1308, built to hold
the Stone of Destiny. (Picture courtesy of Abbey souvenir brochure.) 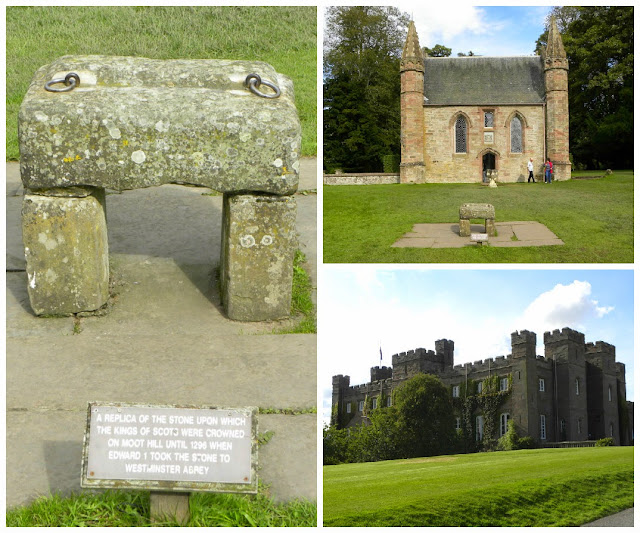 Replica of the Stone of Destiny, or Stone of Scone--(sounds like spoon) is at
Scone Palace, Scotland.The original is on display in Edinburgh Castle.
Macbeth was crowned right here!


I became friendly with a couple on the tour from Texas, Dan and Judy, and after we visited Hampton Court Palace we decided to go exploring together. First we toured Westminster Abbey then, acting as tour guide, I suggested we walk up to Trafalgar Square stopping, of course, at the Silver Cross for more steak and ale pie. After dinner, I persuaded them to walk with me to Buckingham Palace, which I was sure, not more than a few blocks away. We even got directions from a helpful Brit, but what we didn't know was that the road to it was blocked off and we had to detour around several blocks.

When we finally arrived it was dark, but well worth it.  There was hardly anyone around and it seemed as if we had the place all to ourselves. The Palace is not only gorgeous but beautifully lit, glittering in the moonlight like the Crown Jewels. It's open in August for tours, but I didn't realize it required making reservations well in advance. By the time I realized that it was too late to get tickets. But seeing the Palace at night with hardly anyone around was a pretty good consolation prize.  (Word to the wise:  buy tickets in advance!) 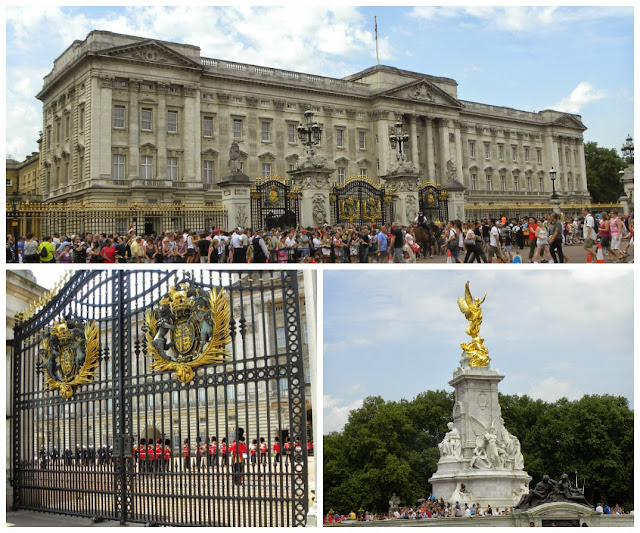 Buckingham Palace in daylight, just in time for the changing of the guards!

SUGGESTED READING: "The White Queen" by Philippa Gregory (An historical novel about Edward IV, his Queen and their boy Princes who were imprisoned in the Tower of London. The Queen took sanctuary in St. Margaret's Church next to the Abbey)

Next time:  The Tower of London﻿
(Click on any picture for a full screen slide show)﻿
Posted by theworldaccordingtobarbara.com at 1:02 PM