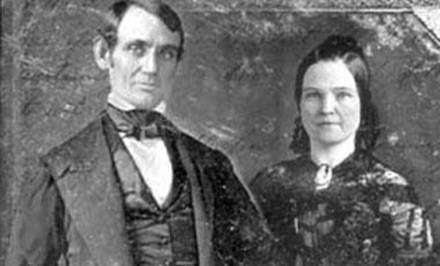 Abraham Lincoln and Mary Todd on their wedding day, 1839

If I could recommend a place to visit anywhere in the United States, it would be Springfield, Illinois. If you are a huge fan of Abraham Lincoln (like I am!) then this is a must see. His home, his neighborhood, his old law office and the Capitol building—it’s all there as if he just left it! I almost expected to see him walking down the street at any moment, tipping his gigantic stovepipe hat to the long skirted ladies as he passed. 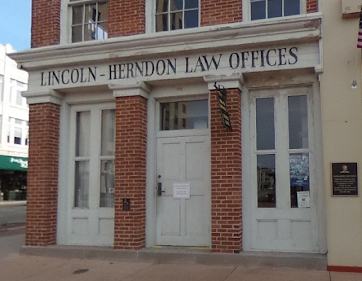 Abe Lincoln moved to Springfield in 1837 after six formative years spent in New Salem just a few miles upriver from Springfield. (See previous blog) It was the year it became the state capital and this young, self-taught lawyer rode into town to establish himself in the bustling heart of Illinois politics. He joined John Todd Stuart’s law office as a junior partner, eventually starting his own law practice with William Herndon. Two years later, he married Mary Todd, who was as politically astute and ambitious as he was. Together they started a family of four boys, only one tragically surviving to adulthood. 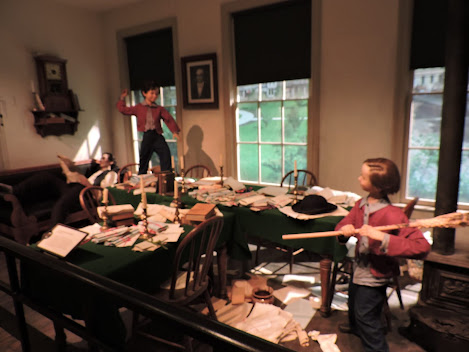 (Picture from the Lincoln Library)
Lincoln often cared for his boys and let them play while he worked in his law office. His partner, William Herndon said that Lincoln "worshiped his children and he loved what they loved and hated what they hated." 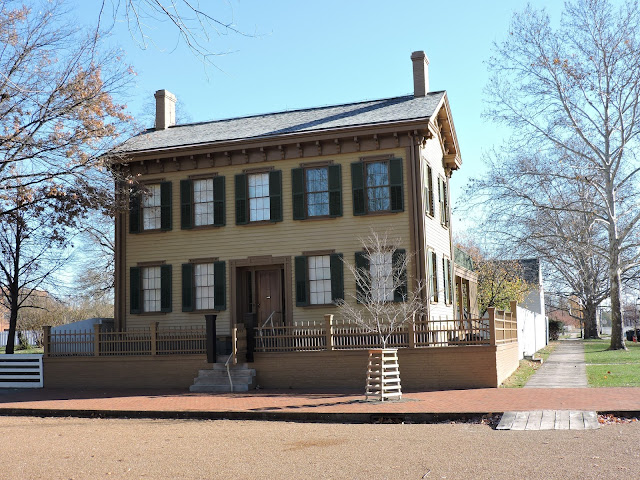 Abe Lincoln and Mary Todd Lincoln's family home in Springfield. A portion of the neighborhood has been wonderfully preserved to capture the atmosphere of their time there. It is located just a few short blocks from his law office, the court house, the Capitol Building and the Lincoln Museum and Library.

The Lincoln's bought a modest cottage in a thriving neighborhood close to his law offices in 1844. Their neighbors were a lively mix of tradesmen and professionals. And if you can imagine it, farm animals were allowed to roam around as they pleased! (Can't you just see them dodging the chickens and pigs on their way to town?) They soon added a second story for their growing family and for the next 17 years, it must have been a wonderful place for his boys, Robert, William and Tad to play. The marriage, however, according to historians, was not a particularly happy one. During this time, they tragically lost their 3 year old son, Eddie, and Lincoln would leave home for sometimes months at a time, serving the outlying areas of the new state with his law practice, which didn't help matters. However, these years away proved politically beneficial, making him a popular and influential figure statewide. 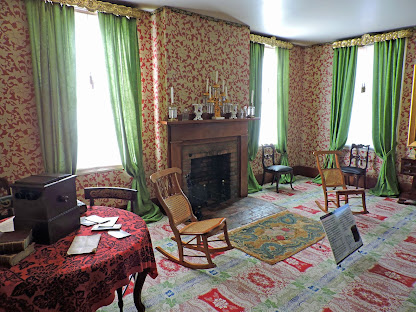 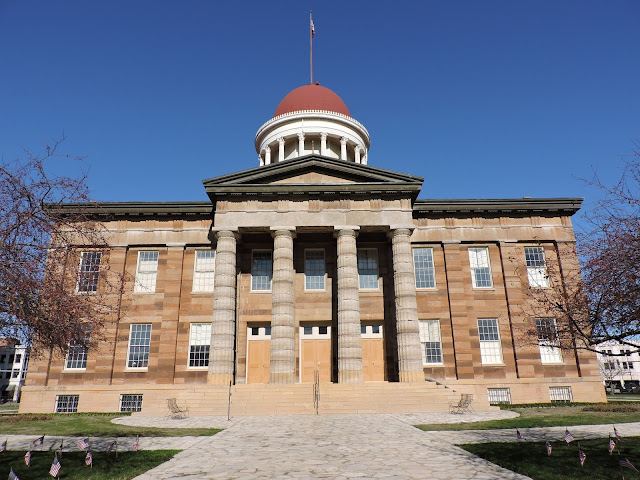 The Old Capital building is beautifully preserved as well, a moving memorial to the years of Lincoln. This is where he gave his “House Divided” speech in 1858, and candidate Barack Obama announced his candidacy for the Presidency on the Capitol steps in 2007. Abe’s spirit is everywhere along these halls, having spent eight years in the Illinois House of Representatives before being elected to the U.S. House of Representatives in 1846. He was also laid in state here for two days in 1865 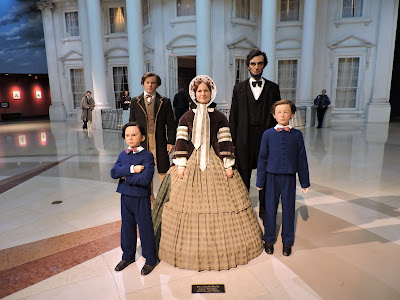 I have seen two other Presidential Museums (George Washington and Ronald Reagan) and each have been fantastic—so worth seeing. But, this one has the added glamour of the original stage sets from a movie!

Steven Spielberg and his DreamWorks Studio loaned the museum many of the sets and props used for his 2012 movie, “Lincoln”, starring Daniel Day-Lewis. Dramatically staged within the museum, the story of Abe Lincoln is unfolded as we go from room to room. His personal belongings and those of his family is a poignant reminder of the man whose journey began in a one room log cabin in Kentucky to the highest office in our country. 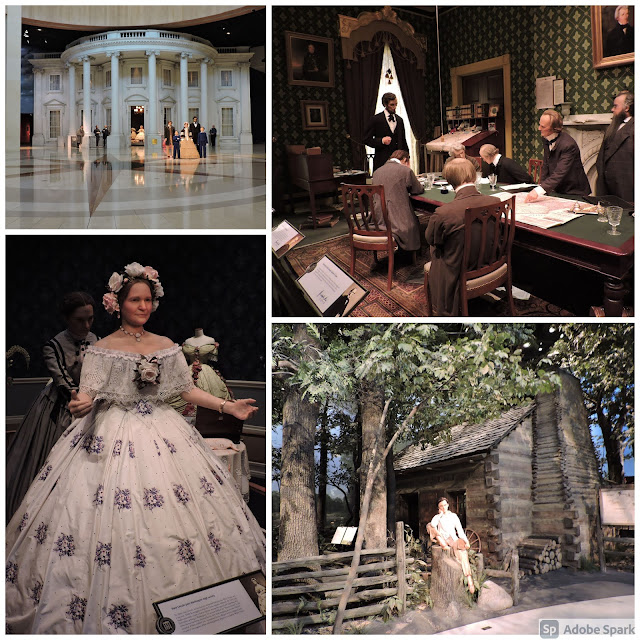 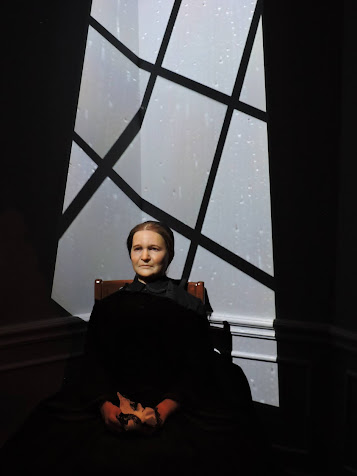 During the Lincoln's years in the White House, their  adored son, Willie, died. He was only 11 years old. Mary Lincoln suffered acutely as this vignette depicts. She is shown sitting in front of a window as the rain, like tears, slowly drips down the panes of glass. 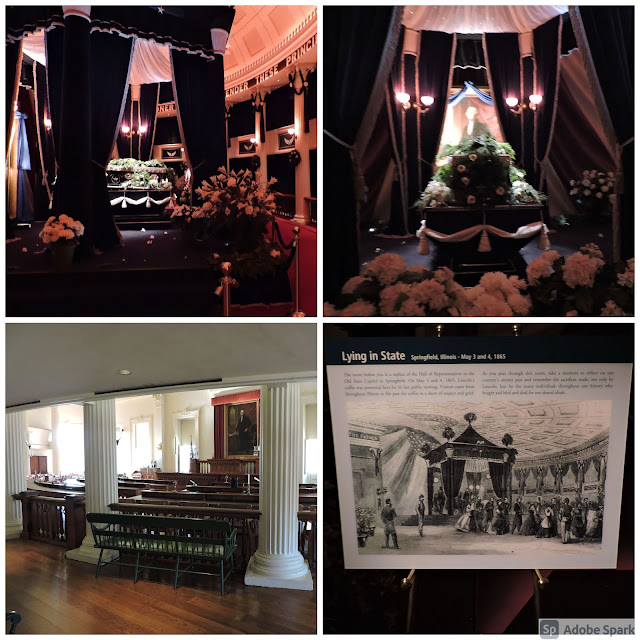 Of course, most moving are the depictions of his death at the hands of John Wilkes Booth, the long train ride from Washington DC carrying his casket, and his lying in state in the Hall of Representatives in the Old Capitol building. Draped completely in black, the Hall was opened to the grieving public on May 3 and 4, 1865. The Hall, which is so realistically recreated in the museum, is especially moving. I remember being by myself in that dimly lit and somber room for several minutes, feeling a shared grief for this great man. 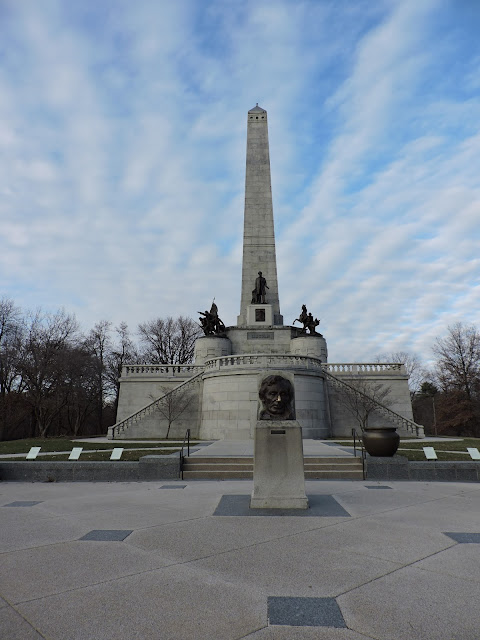 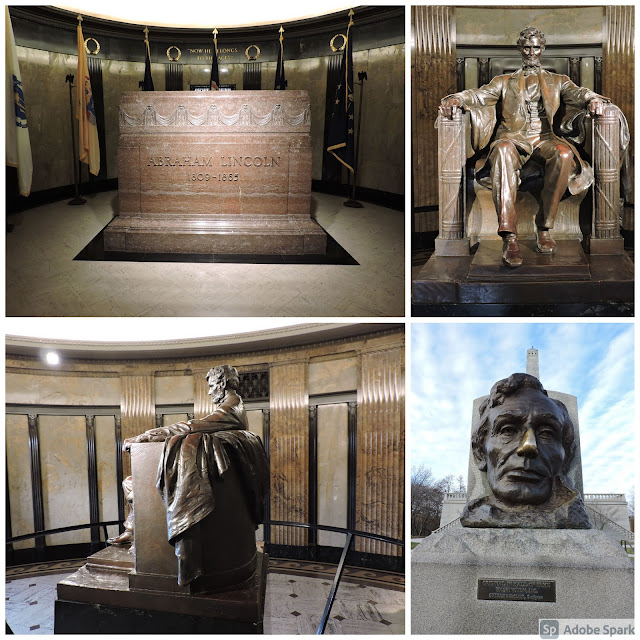 Bronze head of Lincoln is a recasting of sculptor John Gutzon Borglum's head in the US Capitol. He is the same sculptor of the Mt. Rushmore Monument. The seated figure of Mr. Lincoln is like the one in his memorial in Washington DC. It has him sitting on the American Flag.
The final resting place of Abraham Lincoln, the 16th President of the United States is in Oak Ridge Cemetery outside of Springfield, Illinois. His wife, Mary Todd Lincoln as well as three of their four sons is also buried here in this beautiful memorial to his life and contributions to his country. Constructed of granite, it is as grand as the esteem in which we hold him.
MY JOURNEY THROUGH THE LAND OF LINCOLN
This trip has been quite an emotional ride and I feel that I know Abraham Lincoln better now, as a man and not as an icon of history. There is a saying, "To whom much is given, much is required" and in regards to Lincoln, it is so tragically true. In addition to his profound intellect, he was also extremely sensitive and empathetic. From the death of his first love, Ann Rutledge, to the loss of two of his four sons, to the slaughter of the countless lives lost in the Civil War, each etched a deeper crevice in his face. In addition, he suffered from debilitating depression all of his life, which he managed to rise above to function brilliantly in spite of it. This is a road trip you will never forget.

(*A new book released in June, 2021 entitled, An American Marriage: The Untold Story of Abraham Lincoln and Mary Todd by Michael Burlingame. It is a comprehensive look at the Lincoln's complicated marriage. I just received my copy!)

Michael Burlingame is a Lincoln historian and currently teaches at the University of Illinois.

Posted by theworldaccordingtobarbara.com at 2:01 PM No comments: