THE MANY LIVES OF ENGLAND’S WARWICK CASTLE 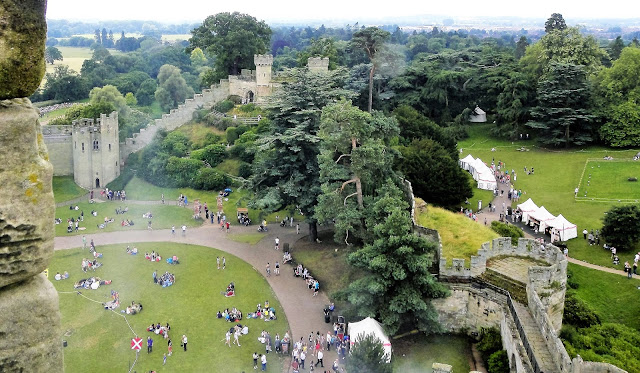 In the summer of 2014, my friends, Kay, Tom, and their granddaughter Sutherland and I spent two weeks wandering the idyllic landscapes of the English midland countryside called the Cotswolds. The name literally means “rolling hills with sheep” and as the name implies, it is fairly dripping in charm. Our goal to soak in every thatched roof and medieval town and village we could started by chartering a canal long boat. We putted up and down the Severn River for a week, and then packed ourselves into a rental car for another week to tour the surrounding countryside. (See my blog: Yanks Canal Boating in Britain, 4/2/15.) We all had our wish list of things we wanted to see and Warwick Castle topped Kay’s list. 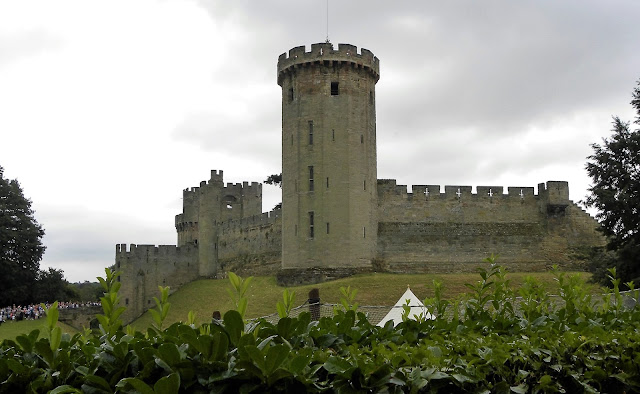 Warwick Castle is a classic example of a Medieval Norman fortification.

From an Anglo Saxon Defensive Mound to Norman Castle

The picturesque old castle, steeped in 1,000 years of history and designed by William the Conqueror himself, stands guard over the Avon River in Warwickshire, not far from Shakespeare’s birthplace, Stratford-upon-Avon. Originally an Anglo Saxon stronghold, the Normans constructed a wooden fort  on the site in 1068, which was rebuilt in stone two hundred years later. Down through the ages, it passed through many hands depending on what faithful supporter of what king needed rewarding. By the 16th century, however, it was in sad shape. King James 1 gave it to Sir Fulke Greville, along with the title of Earl of Warwick, who then spent the equivalent of 3 million dollars to convert it to a fine country home. 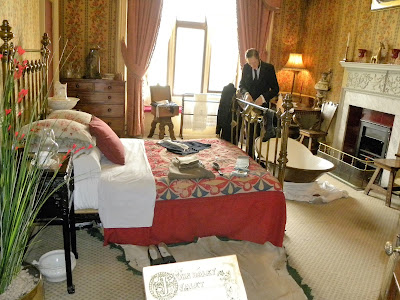 During the Victorian era, Warwick became one of the places to party, and Daisy, Countess of Warwick, knew how to throw a good one. First the guest list: of course one would invite the Duke of Wales (rumored to be her paramour), his son Duke of York (later to become George V), and members of the Churchill family including the young Winston (later to become Prime Minister). Throw in some famous entertainment, fabulous food, beautiful women and rich men and voila! Let the fun begin.

A gentleman visitor would always bring his own valet.
Warwick Castle as Theme Park

So, given that the castle had been a playground for the rich and famous, it should have been no surprise that it is now a playground for the middling classes, or in other words, you and me. Except that I was completely taken by surprise because I hadn’t done my homework! It had been a theme park since 1978 when the Tussauds Group (Yep, as in Madame Tussauds) took it over. To their credit, they paid for extensive restoration on the castle and grounds and now it is considered one of the best of England’s castles.

However, because I wasn’t prepared for the theme park atmosphere, my first impressions were not very favorable.  At first, the Quasimodo looking Jester who greeted us, the knight on his mighty steed and the merchants taunting us with their wares were amusing, but it soon began to look suspiciously like a ”Medieval Castle World” in Disneyland. A hot, humid day anyway, the crowds of adults and children vying for a spot at the food stands and tours quickly (for me) became oppressive. (I do apologize to all of you who happen to like amusement parks; they’re just not on my list of favorite things to do!) 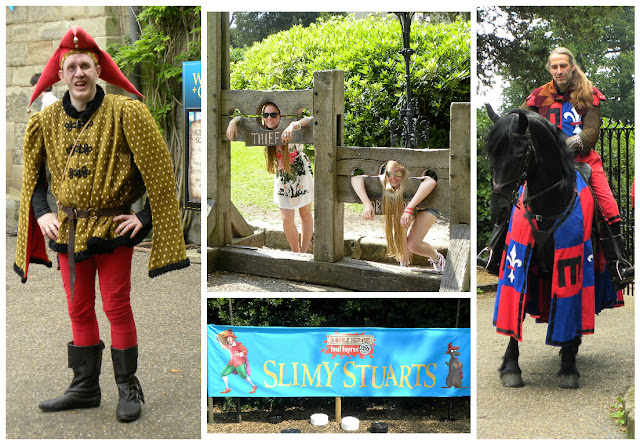 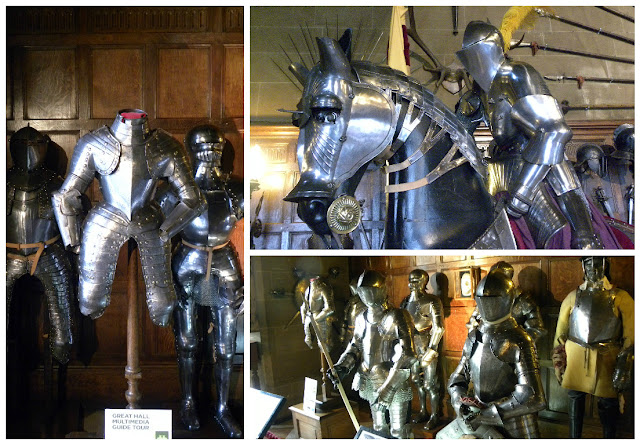 These beautiful sets of armor were only meant to be worn for special occasions.
The one on the left was made for a seven year old child.

Once inside the castle, I relaxed and enjoyed the more traditional exhibits of amour and furnishings. That is until we wandered into what was once the Greville’s Victorian drawing room. There, wax figures of Lady Randolph Churchill, Daisy, Countess of Warwick, and others sat stiffly staring into space while disembodied voices engaged in gossipy conversation. It went from sad to silly in the next room. The wax “men” (supposedly Duke of Marlborough, Duke of York, Lord Greville etc.) poised around a card table, were engaged in an equally lively discussion all while having  their wax lips sealed. One poor figure, his wig skewed and looking uncomfortably propped up in a chair, appeared in no condition to have any opinion at all. He frankly looked like someone forgot to bury him. 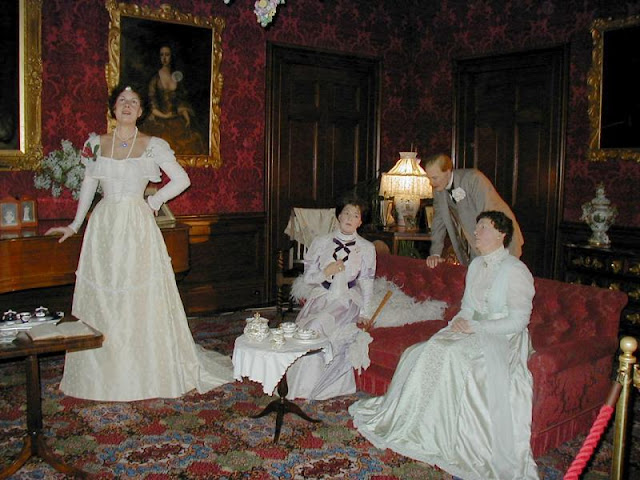 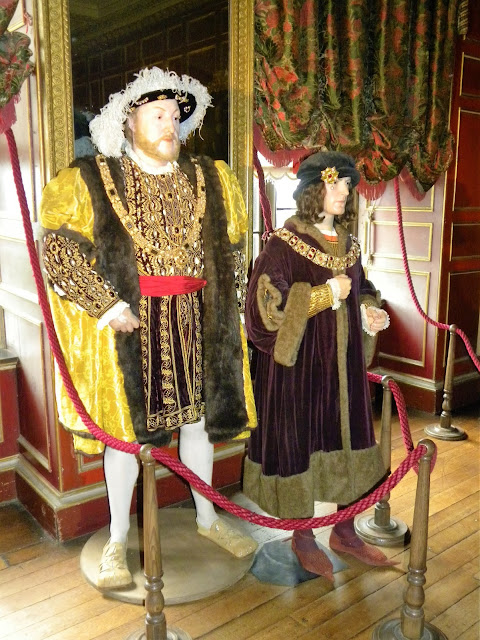 Just in case I’m making the whole experience sound like a disaster, it truly was not. Many rooms were tastefully furnished with realistic looking wax likenesses of the notable people who used to live and visit the castle, which I did enjoy. However, I was thankful that they didn’t include those unintelligible voice-overs they used in the drawing room. My favorite was the wax figure of King Henry VIII, who incidentally, never visited the castle. But who cares? After all, how many times do you have the opportunity to have your picture taken with a King? (Shown here with a likeness of Richard III.)

The Most Beautiful Woman in Warwick! 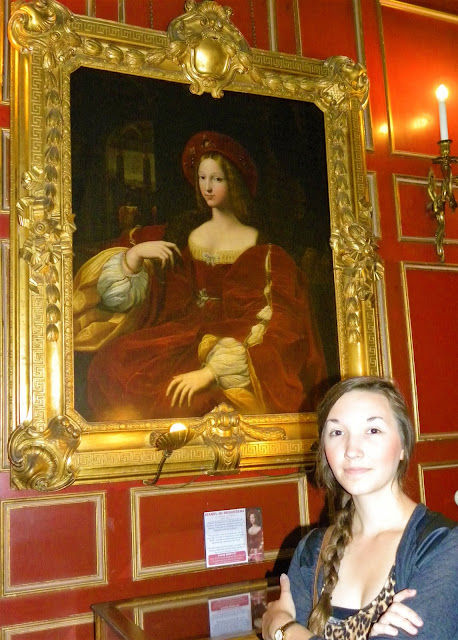 Kay and I were totally blown away when we saw this painting of Isabel de Requesens, Vice-Empress of Naples, and how much she and Sutherland look alike. How nice to resemble a lady who was considered the most beautiful woman in Spain! 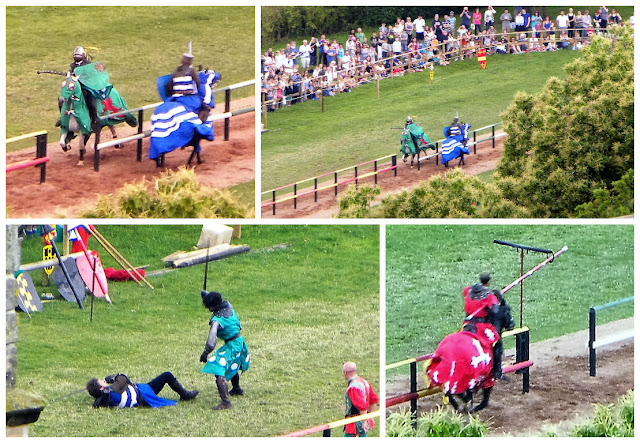 I attempted to catch the jousting taking place on the field outside the castle from
my place on the ramparts. Now THAT looked like fun! 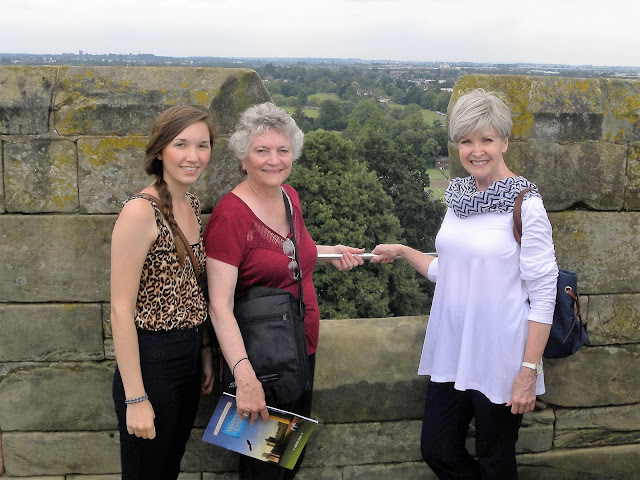 (left to right) Sutherland, Kay and me with Warwickshire in the background. 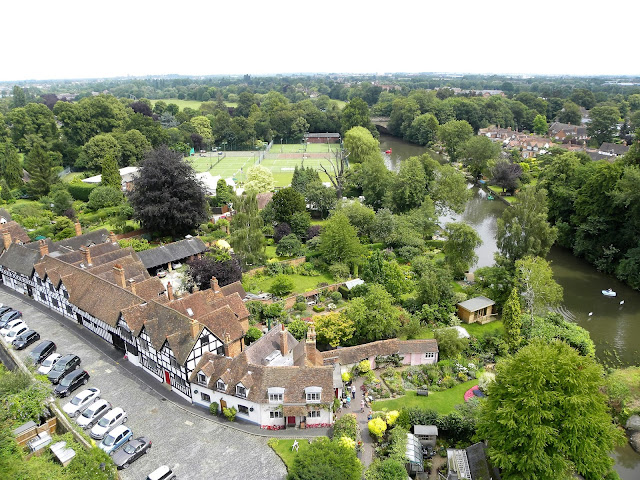 View from the castle of the Avon River 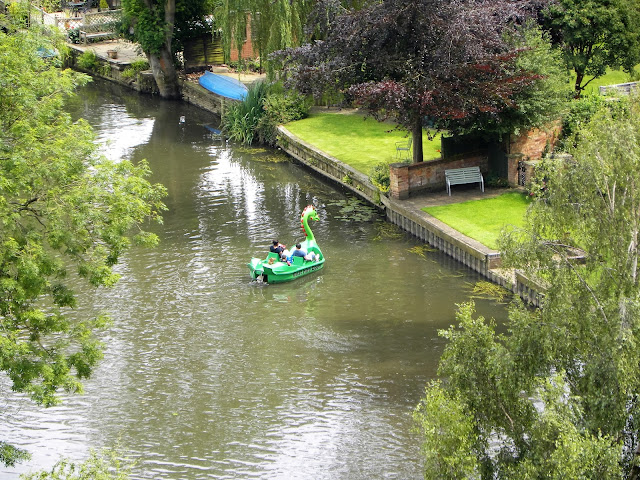 There be dragons in the river!

The Castle really is spectacular. Compact, it is perfect in scale and a showcase of classical Norman architecture. I must give the Tussauds Group a hand for preserving such an English treasure and bringing Warwick Castle to life for future generations to enjoy. (TIP: Go off season and pick a cool day!)

Next time: Oxford Revisted
Posted by theworldaccordingtobarbara.com at 9:09 AM No comments: