On to Maryland, Washington, D. C. and Virginia

It’s just a short plane ride from Boston, where I said a reluctant good-bye to my good friends, Pat and Bill, to Baltimore, Maryland. I planned to spend a few days there with another couple I met on that fantastic trip to Great Britain, Chuck and Paula. We became instant friends while on the tour and I really looked forward to spending more time with them. A couple determined to enjoy every minute of every day, I knew it would be a week to remember!

When Paula asked me what I wanted to see during my visit with them, I crossed my fingers and gave her my wish list. I said, “I’d like to see Mt. Vernon, Washington, D. C., Monticello and anything else you’d like to show me!” I’m glad I asked because Chuck and Paula gave me the royal tour, going above and beyond anything I could have imagined. Not only did we see everything on my list, they also took me to D. C. twice, the seaport town of Annapolis, and Montpelier, James and Dolley Madison’s home in Virginia. Plus, they hosted two dinner parties for friends and neighbors to meet me and generally wined and dined me like a Dowager Duchess. In fact, they just about wore me out! Allowed only two cups of coffee before I was hustled into the car for a day filled with nonstop sightseeing, we didn’t come home until late every night. And, I loved it! 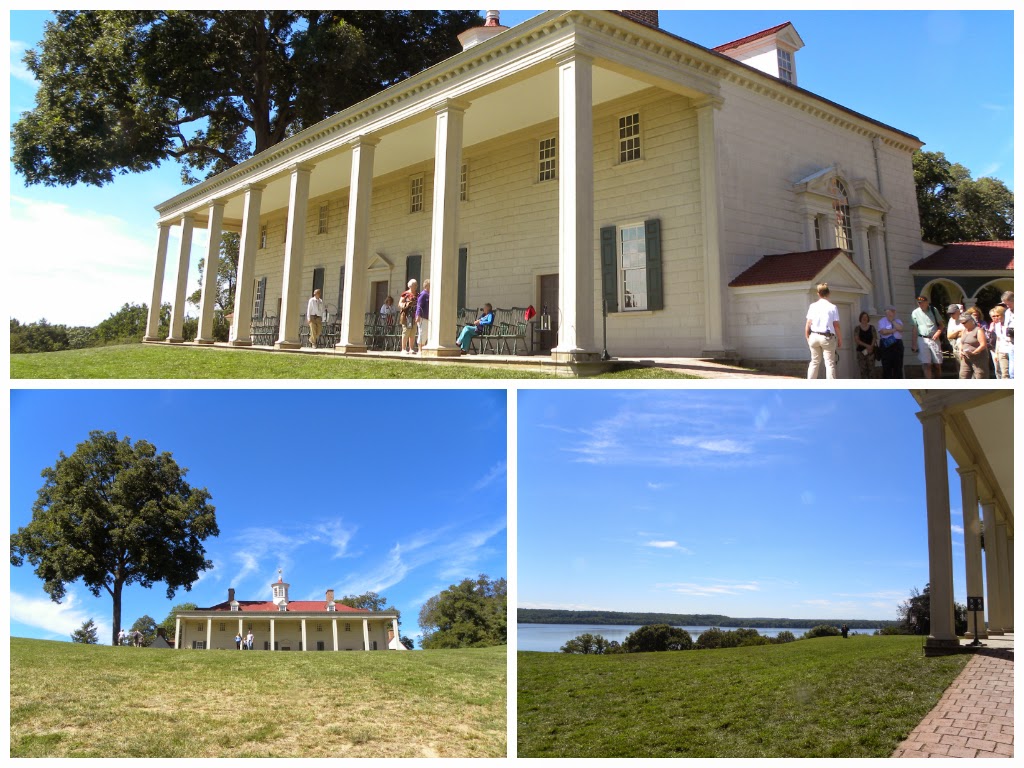 Situated high on a grassy knoll overlooking the Potomac River, Mt. Vernon is only about 15 miles outside of Washington, D. C. Getting there took us through lush rolling hills scattered with fine looking horses; a perfect example of a bygone era of refined plantation living. 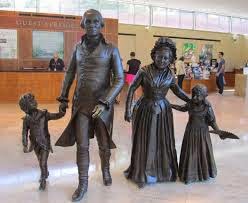 Shortly after arriving at Mt. Vernon, the visitor is first ushered into a world-class museum. Like honored guests, they’re met by George and Martha, or at least life-size bronze statues of them, and two of their grandchildren, who seem to be rushing by on their way to somewhere on the plantation. Martha, barely 5 feet tall, doesn’t even come up to George’s shoulder and you can just imagine that it takes her two steps to his one just to keep up! The fluid, life-like movement of the bronzes set the stage for this museum that turned out to be one like no other I’ve ever seen. 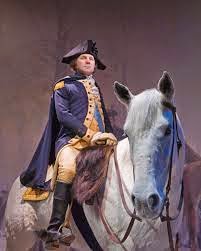 Consisting of seven galleries and two theaters, the museum has over 500 items from the Washington’s lives. The curators made Washington the man almost real. They placed life-sized avatars of him in the clothes he wore, surrounded by his personal possessions--so life-like I waited for him to move. Vignettes of him sitting regally on horseback in full military uniform, and being sworn in as President of the United States, show him  handsome and tall, with a natural leader’s grace and bearing, effortlessly commanding respect. 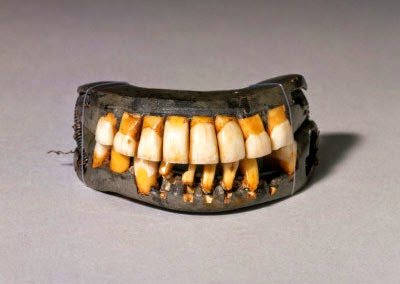 And yet, around a corner I found a set of his false teeth and the myth became the man. Washington suffered from periodontal disease, and despite his best efforts eventually lost all of his teeth. His dentures, a horrid contraption made of hinged metal plates embedded with teeth made from hippopotamus ivory, are a vivid reminder that he lived everyday in discomfort and pain having to wear these torturous things. I could not imagine trying to talk with that contraption in my mouth let alone eat with them. (Washington had many sets of teeth made, but the only complete set is in the Mt. Vernon museum.)


Before leaving the museum to see the house, we stepped into one of the theaters to see a movie called “We Fight to Be Free”. Twenty-five minutes long, it starts with Washington as a young man in the French and Indian Wars, then follows his courtship and marriage to Martha Dandridge Custis, a wealthy widow with two children, and ends with the bitter battles of the Revolutionary War. The massive screen wraps around the audience, enveloping and drawing us in. I swear my seat moved with the waves during Washington’s crossing of the Delaware River and I felt real snowflakes falling from the sky! I heard as well as felt the rumble of the far off cannons as I strained to see through the fog. At the end, I was moved to tears when a tired leader finally made it back home to his family after eight long years of war. It is undoubtedly one of the best interactive museum experiences I have ever had! Really well done! 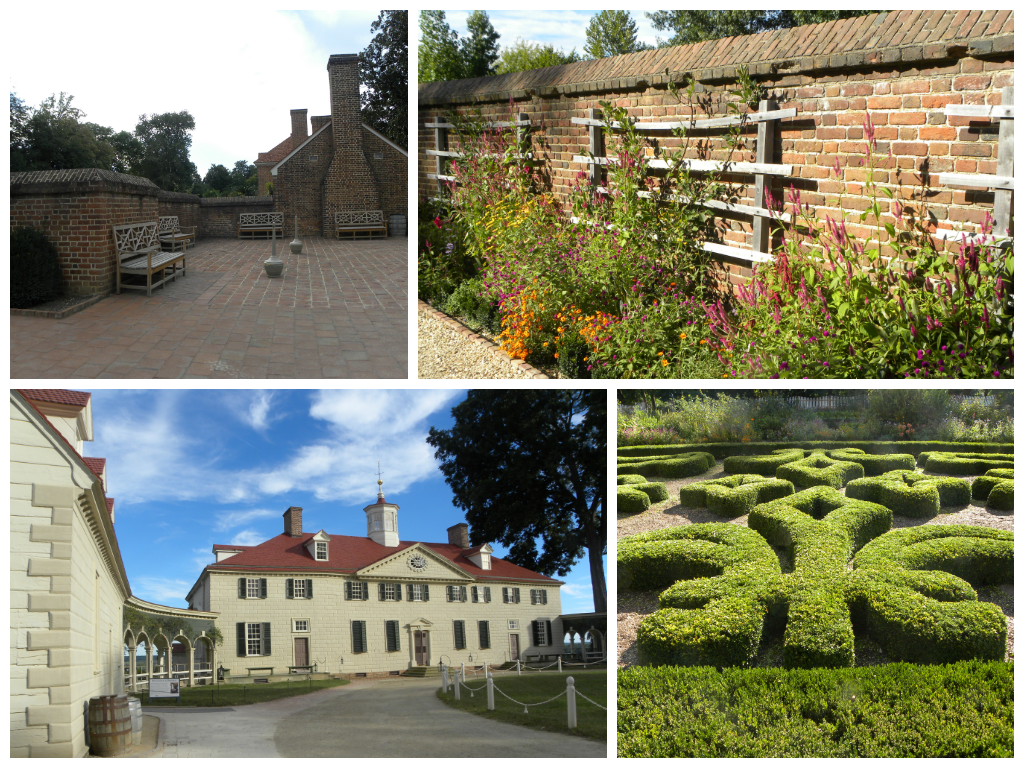 The front of the house, outbuildings and gardens.

It Pays to Be Last

After going through most of the galleries, we made the trek up the hill to Mt. Vernon, the home. Being mid-afternoon, the crowds had thankfully thinned, but even then a sizable group of us lined up to go through the house. Bunched together in a tightly packed clump, we shuffled awkwardly through the tight corridors dodging heads and elbows as we labored to see into the rooms. “No photographs allowed!” the docents warned. “No touching either!”  Eventually, I found myself outside and thoroughly disgruntled that I hadn’t seen or learned much of anything. 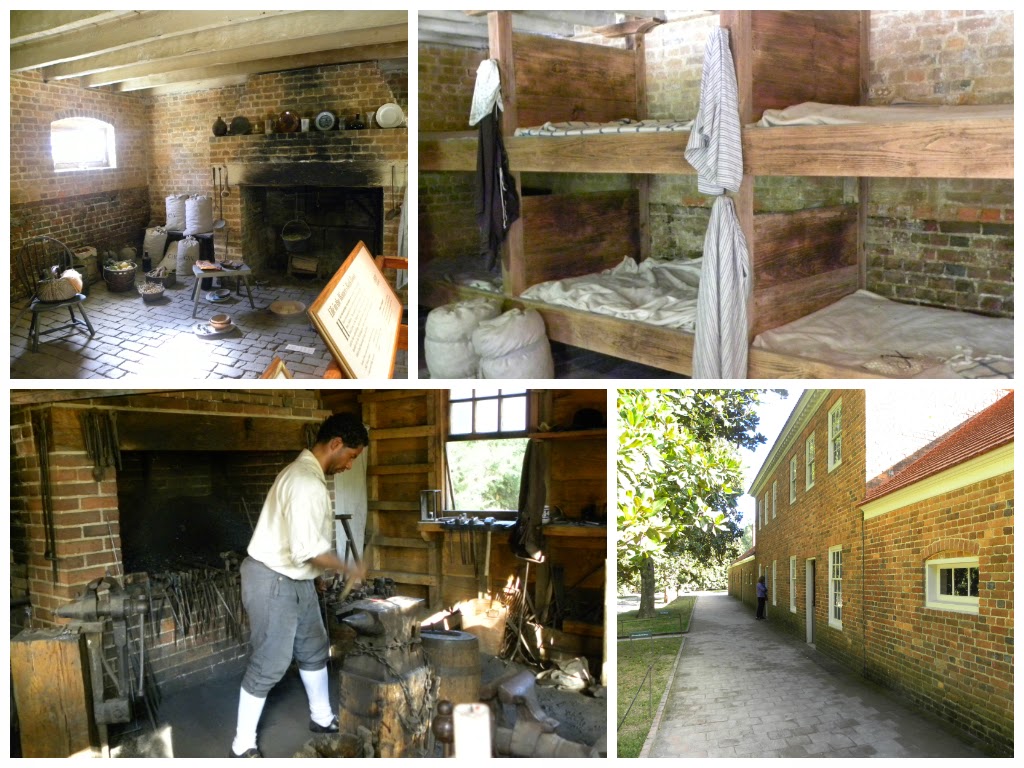 We spent the rest of the afternoon wandering around enjoying the view of the Potomac River from Washington’s piazza (his back porch), and going through the outbuildings where the kitchens, work spaces and slaves quarters are. We met some real blacksmiths demonstrating how tools were made on the farm, and docents acting like George and Martha. One of the guides whispered that “George” would only answer if you called him “The General”. So, I asked “The General” if I could take his picture.

“Mr. General, Sir! May I capture your likeness with this small box?” which he granted me permission to do with unsmiling dignity and I actually had to stop myself from bowing! 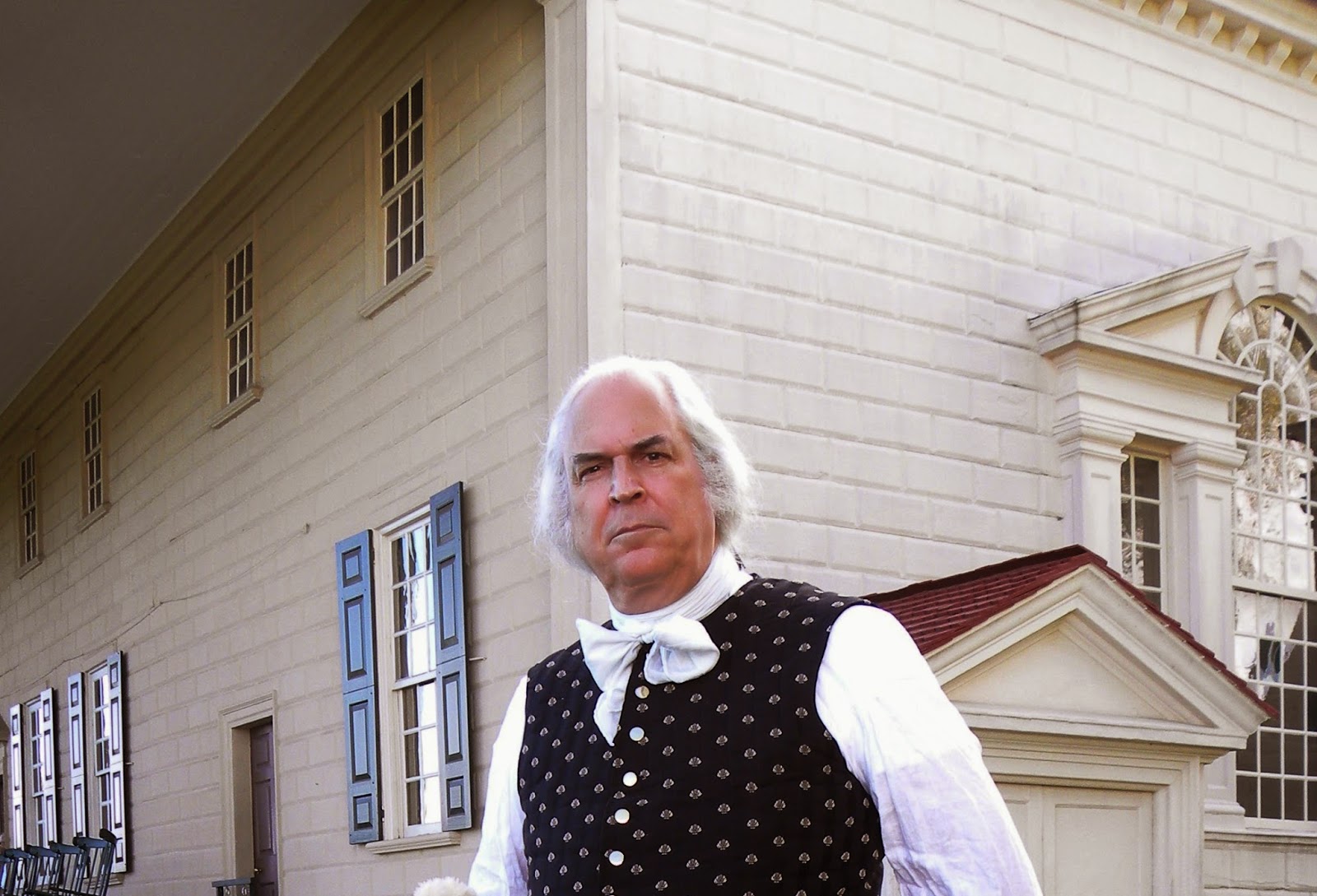 Then suddenly, I looked around and realized everyone had left except for the docents and the three of us. With time remaining on the clock, one of the docents I’d been chatting with asked if we wanted a private tour of the house! I jumped at the chance, while Paula and Chuck elected to sit outside in the cool breeze.

I could not believe my luck! This time when I entered the home, I felt like a guest. The docents stood silently by and allowed me free rein to wander the halls. I couldn’t go into the rooms, but I could clearly see into them and in doing so, my imagination took flight. At the foot of the staircase I imagined George Washington pausing to look at his prized possession, the framed key to the Bastille that his close friend and frequent visitor, the Marquis de Lafayette gave to him. I could see laughing children running up the ornate staircase in the spacious entryway, hanging onto the banister as they went. 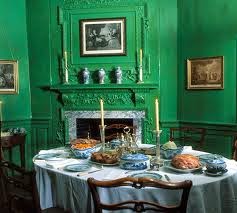 The small dining room, waiting for the family to sit down and eat, boasted walls of bright emerald green. Washington was proud of that color and had personally selected it. The intense, saturated color was expensive and fitting for a house like his.

Leaving the entryway, I walked through a small yellow guest bedroom and climbed a modest set of narrow stairs to the second floor to George and Martha’s bedroom. A spacious room with a fireplace, upholstered chairs, and pictures of the grandchildren, it is comfortable and unpretentious. But, it is the canopied bed that I couldn’t stop looking at. It is where George Washington died. In 1799, just two years after retiring to his home, he became gravely ill after riding his horse in cold and snowy weather. Doctors came right away, but were powerless to do anything but comfort him until he died. His last words were, “I die hard, but I’m not afraid.” The bed and bedroom were never used again. Martha moved her bedroom
to the third floor. She died three years later.

Alone in his home and just inches from where he died, I felt a profound connection with George; no longer the tall, strong general, but a fragile and finite human being, someone like all of us who has experienced love, desire, anger and pain. I consider it a privilege to have been allowed this private moment.

The docents walked down the hill with us and waved good-bye. Sometimes it pays to be last.

Good read: “1776” by David McCullough. Although interesting it’s not compelling, and frankly, it took me several tries to get through it, but I’m glad I finally finished it. I learned a great deal about George Washington and this decisive year in the Revolutionary War.