"My name is Mrs. Edward Candee (Helen Churchill Hungerford).  While in Europe doing research for my latest book, I received word that my son was seriously injured in an automobile accident.  I booked passage on the first ship available, the Titanic..."  This and other similar short back stories are printed on boarding passes given to us as we entered the Titanic artifact exhibit at the Natural History Museum in San Diego.  Each pass represents an actual passenger who had sailed on that tragic voyage.  We learned that we would find out at the end of the exhibition whether our traveler lived or not.

This set the stage for one of the best museum experiences I've had to date.  Commemorating the 100th anniversary of the sinking of the Titanic, the exhibition took us on a tour of this jewel of the White Star Line as it had looked on the day of it's sailing.  Clearly every effort had been made to make this the finest luxury liner on the seas.  Against life sized backdrops of actual pictures are recreations of opulent settings a first class traveler enjoyed, from a 5 star dining room set with the actual china, to a luxuriously appointed state room. Each tableau is set with the artifacts salvaged from the wreckage, many of which survived a hundred years in those cold ocean depths in incredibly good condition.  One of which is a man's suit.  It amazed me that it showed remarkably little deterioration and I learned that anything that was packed in a leather suitcase was protected.  It seems microbes don't like the taste of tanned leather.

Overhead we heard Celtic music softly playing as if the ship's orchestra performed in a distant room, and as we "descended" to the third class accommodations, the sounds of the engines grew louder and louder until we found ourselves in the boiler room.  Even though the fires roaring in the massive boiler are simulated, we could imagine the heat of the flames which pulsated to the rhythm of the throbbing engines.

This is museum as theater, an exhibit that creates an experience that teaches and challenges our thinking and perspectives.  It is engaging on several levels, sensual, emotional and intellectual, and sets the bar high for all other exhibits like it.  It is a must see.  Oh, and by the way--Mrs. Candee survived.

Another very well done exhibit is at the Bowers Museum in Santa Ana entitled, Warriors, Tombs and Temples.  The only draw back with this exhibit is that it was too crowded. Reservations are required, but the exhibit space was small and it felt positively combative to get close enough to see anything. However, if you can make it before it closes on March 4, it is well worth seeing. ﻿

This exhibition features artifacts from three major Chinese dynasties, the Qin, Han and Tang.  The most impressive exhibit greets you when you first enter--the life-size terra cotta soldiers  created to protect China's first emperor Qin in the afterlife.  It surprised me to learn that like the Egyptians, these emperors believed they could take not only possessions but people (even simulated people) into the afterlife.  Acres and acres of buried warriors, horses, and chariots were discovered in a mausoleum complex that is considered the eighth wonder of the world.  Fortunately, this museum allowed us to take pictures: 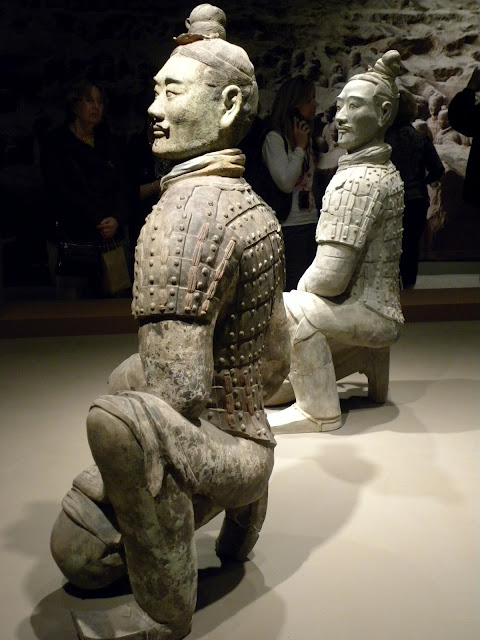 You can see hints of the brightly colored paint that once covered the figures. 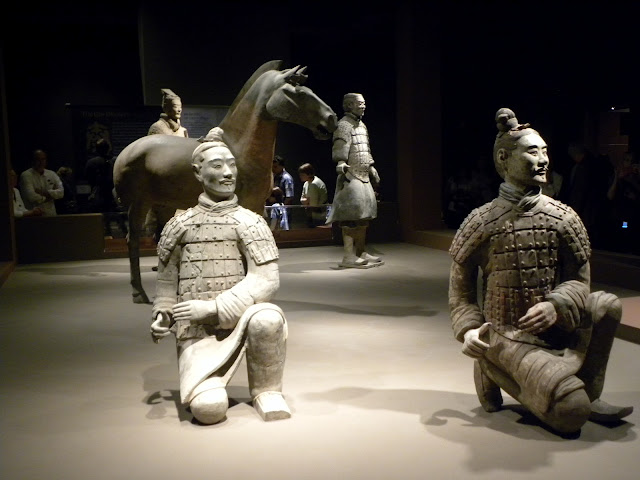 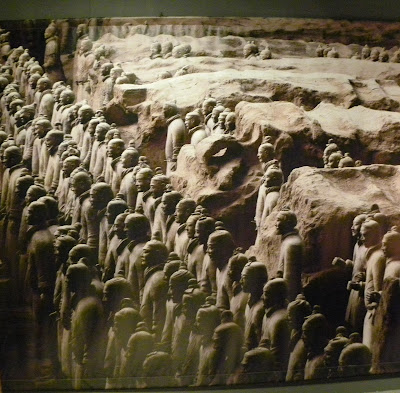 A picture of one of the excavation sites.﻿ 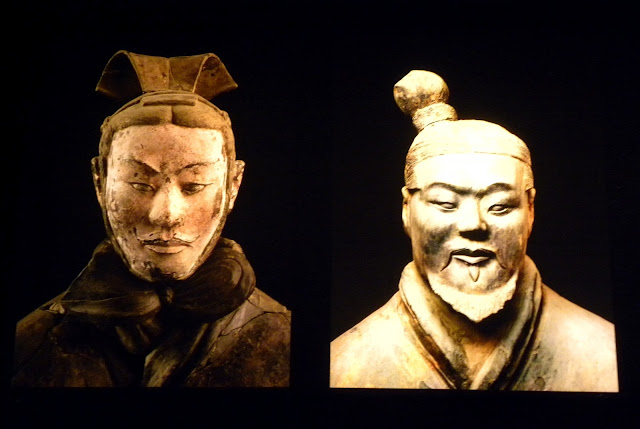 Each statue's face was patterned after an actual warrior in the Emperor's army, and there are thousands of them. ﻿ Rank can be determined by the hairstyles and head adornments. 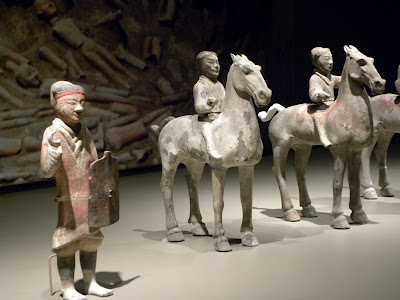 The Han emperors miniaturized their 40,000 smiling terra cotta soldiers which look
more like cookie cutter dolls in comparison to the Qin warriors. 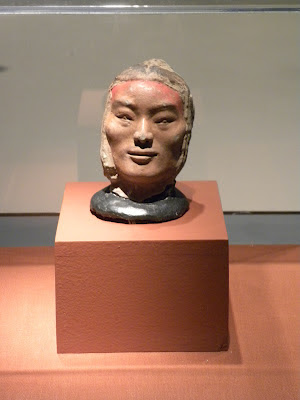 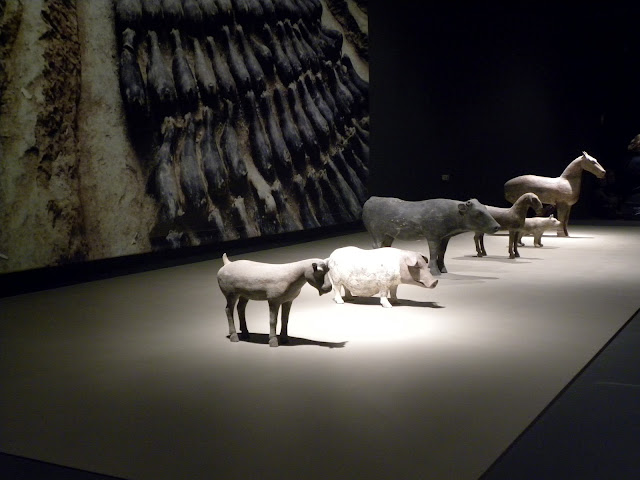 The Han Dynasty also included animals, concubines and a multitude of objects to insure a comfortable and lavish afterlife.
Posted by theworldaccordingtobarbara.com at 3:29 PM No comments: