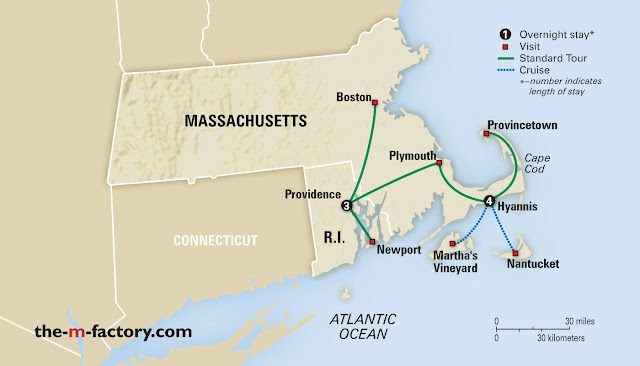 I became totally smitten with New England when I toured the area a few years ago in the fall. I mean, who wouldn’t swoon over the romantic covered bridges, the unique church spires, the quaint postcard villages and the millions of square miles of leaves the colors of fireworks inspiring the same “ooooh’s” and “aaaah’s”? Not me, that’s for sure! I returned home with rapture in my heart vowing to return as many times as possible.

Well, I got my chance this September when I hitched a ride with Collette Vacations’ “Islands of New England” tour. Although too early for the leaves to turn their fiery fall colors, I would at least see some of the places I didn't see enough of the first time around, places like Providence, Newport, Nantucket and Cape Cod.

Providence, My kind of town

Do you remember the TV show a few years ago called “Providence”, about a doctor returning to her hometown? I would have come home too to those serene tree lined streets curving through sedate Federalist mansions and Victorian cottages if I were her. I think I watched the show every week just to see the town, so I was excited when I heard we would stay in Providence for three nights. Finally, I was going to see it in person.

Fifty eager passengers and I clustered together in front of our hotel early the first morning for a bus tour of Providence. Melanie, our Tour Manager greeted everyone with a big beaming smile while Josef, our zany bus driver, admonished us to “Watch your steps and not my blue eyes!” as he hoisted each one of us into the bus. I’ll bet if anyone of us woke up on the wrong side of the bed he would literally pick us up and put us on the other side!

As Josef expertly maneuvered his mountain of bus through the narrow colonial streets originally built for carts and carriages, I couldn’t help but compare the images streaming by my bus window to the ones I remembered from the TV show. Happily, Providence lived up to my expectations. The frustration for me is that I had to see it from only one side of a moving bus. I longed to get out and walk through the peaceful neighborhoods, taking picture after picture. I planned to come back and do just that by myself, but the tour kept us on the go from early until late every day and I didn’t get a chance. Oh well. I’ll just have to come back!

As we craned our necks to see the views, Melanie gave us a brief history of the town and state, “Providence Plantations was founded in 1636 by a theologian named Roger Williams after having been banished from the Puritan dominated Massachusetts Bay Colony. He named it in honor of ‘God’s merciful Providence’ and wanted it to stand for freedom of religion and separation of church and state. It is also one of the original thirteen colonies!” 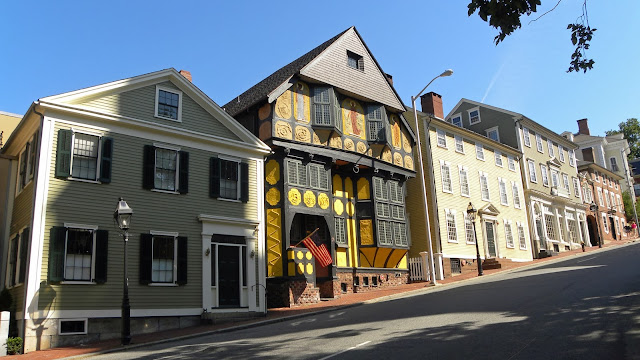 Homes on one of the seven hills of Providence.

Providence, it turns out, is perched on seven hills all with names like Constitution Hill, College Hill and Federal Hill (home of Little Italy and delicious Italian food). They provide wonderful views of the city, however the best is on College Hill.  Josef parked the bus at Prospect Terrace Park and we all piled out onto a large expanse of green lawn to enjoy the view of downtown below and the domed Capitol building. 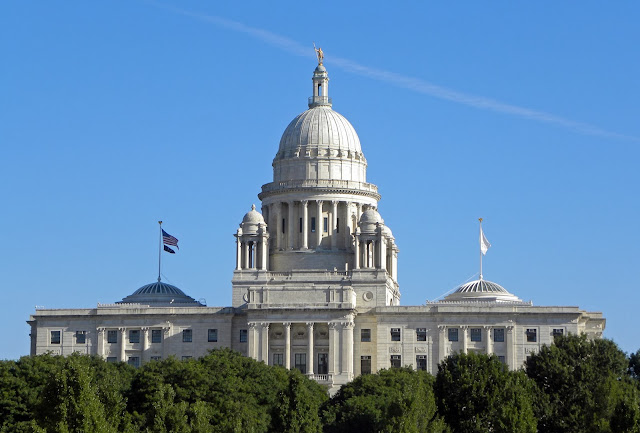 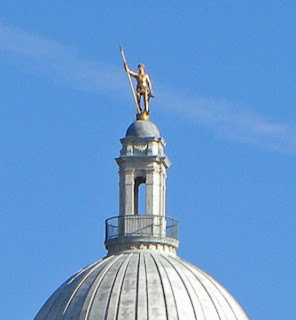 Perched on top of the Capitol building is a statue called “The Independent Man” which proudly boasts of Rhode Island’s fiercely independent ways. They glory in the fact that they were the first to rebel against the British and the last to sign the United States Constitution. 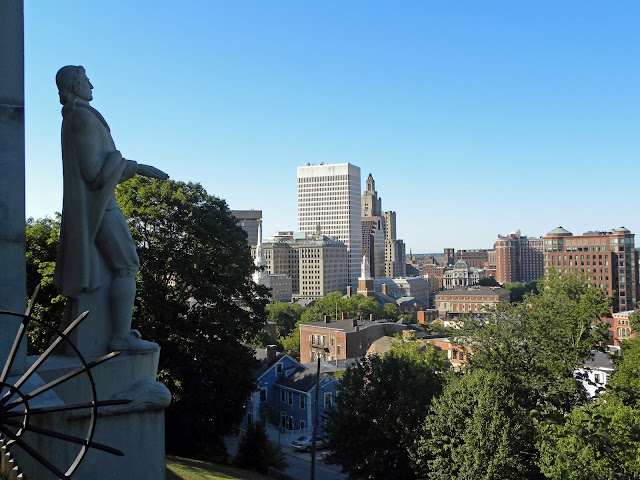 Gazing over the city is a large statue of Roger Williams, a tribute to its founder which also serves to mark his grave site.


Back on the bus, Melanie continued the history lesson: “Remember the four ‘Browns’ when you think of Providence: Moses, Joseph, Nicholas and John. You’ll see the name everywhere! Enormously wealthy merchants and statesmen, they are best known for helping to establish Brown University in 1764.” Pausing to give Josef some backseat driving instructions, she added with some pride, “Brown is one of the oldest private Ivy League schools in the nation!”

Brother Joseph Brown, the architect, designed our next stop: the First Baptist Meeting House in 1775. The oldest Baptist Congregation in the U.S, it looks like a wedding cake, gleaming white and majestic in the New England morning light. 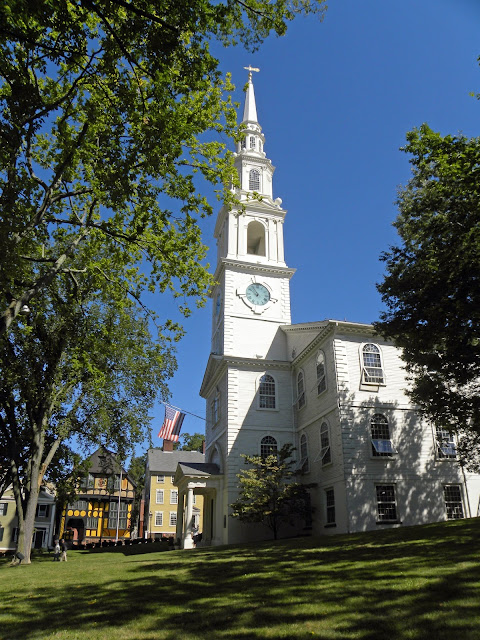 The oldest Baptist Congregation in America, the church was built in 1775.

After that, we drove out of Providence to spend the day in nearby Newport. On the way, Melanie asks, “Does anyone know Rhode Island’s real name”

“You mean it has an alias?” someone piped up.

“Not exactly. It’s short for…” A chorus of voices joined in with, “Rhode Island and Providence Plantations!” Wow. Put that on your license plate! I made a mental note to find out about the name that sounds more like a title, and for that matter, why a mainland state has "island" in its name. It turns out that Rhode Island, even though attached to the mainland, also includes 35 islands. The official name is the merger of two settlements. Providence Plantation, which was the name of the colony Roger Williams founded and is now the city of Providence and Rhode Island colony, which was founded on the largest of the islands, Aquidneck. (It's believed that the name originated from the Italian explorer who discovered it, thinking the island looked like the Greek island of Rhodes). Roger Williams officially gave the name Rhode Island to Aquidneck in 1644. And there you have it!

Later that night, a few of us walked the short distance from our hotel to downtown where we were lucky enough to participate in the town’s annual WaterFire event. During summer evenings, one hundred bonfires blaze above the surface of the three rivers that flow through Providence accompanied by the soaring strains of classical music. The evening was beautiful and we were warmed by the fires. Gondolas languidly floated up and down the rivers for private parties to enjoy the view from the water. Although the place was packed, the atmosphere was peaceful and relaxing, like sitting around a campfire after the sun goes down. A very nice way to end the day. 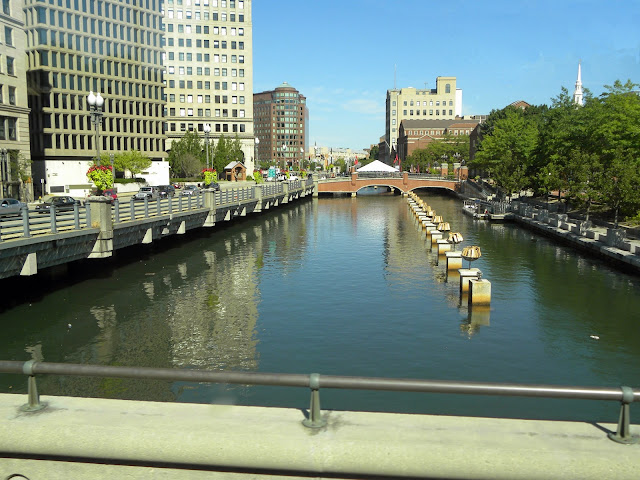 Between 1976 and 1994, the city reclaimed its rivers from having been paved over and relocated a large section of railroad tracks underground to create Waterplace Park and river-walks. Providence, which had gotten a bit shabby over the years, was literally transformed into  "America's Renaissance City". Now, the downtown area is a beautiful place to walk and socialize. In the picture above, you can see the bonfires are ready to be lit for WaterFire after dark. (Perhaps the purpose of the TV show "Providence" was to advertise the town's transformation... If so, it worked for me!) 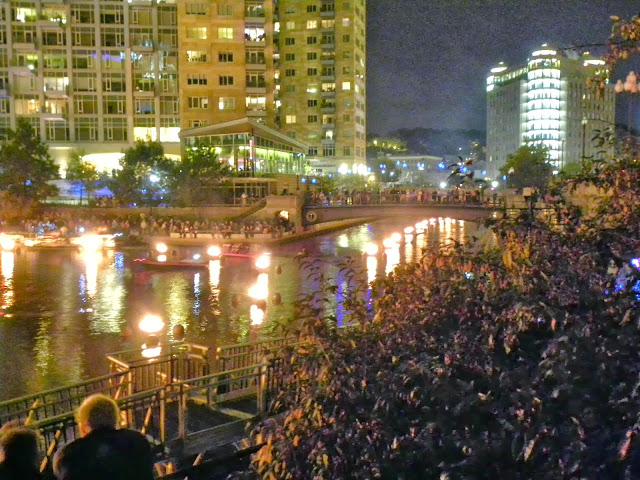 Waterfire at night in downtown Providence.

Watch a Video of the trip!

NEXT TIME: Newport, Gilded Mansions from a Gilded Age

Posted by theworldaccordingtobarbara.com at 4:59 PM