WHERE IN THE WORLD HAVE I BEEN?? 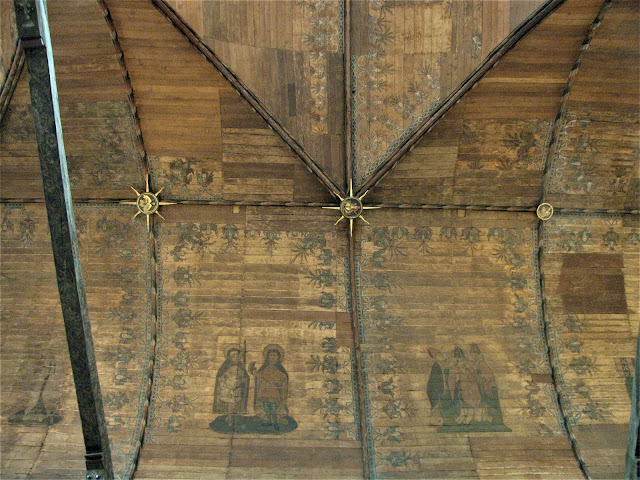 The Ceiling in Old Church, Amsterdam

IT'S BEEN QUITE A YEAR since I fell flat on my back in an Amsterdam cathedral, breaking my pelvis in two places; a year that included recovery, selling my home, buying another and moving hundreds of miles away. It was time to move closer to family just in case I did something stupid again, like not watching what I'm doing!

Exactly one year ago, the four of us (my daughter Audrey, friends, Kay and Tom and I) arrived in Amsterdam for what we thought was going to be an unforgettable trip. How right we were, but not in the way we imagined! I'd so looked forward to the Viking cruise that would take us up one of the most beautiful stretches of river on earth--the palace and castle lined Rhine River from Amsterdam to Basel, Switzerland. As it turned out, the adventure I had was NOT the adventure I planned! One and a half days into the trip I fell, fracturing my pelvis. Just what nightmares are made of, right? Here's the story:

HIGH ABOVE MY HEAD, the saints on the ceiling looked as if they had been painted on the hull of a viking ship. Burnished in gold and faded from age, I had to try to capture the wonderful luster and craftsmanship of both the ceiling and the paintings. Looking through my telephoto lens, however, the images seemed to dance and float somewhere off center. Lacking a tripod, I finally tried to steady the camera by taking a deep breath and holding it for several seconds until I had the perfect alignment. Then, the ceiling disappeared--followed by a surreal sensation of falling backwards, floating almost, like a feather released over the ancient gravestones that served as the church's floor. Silently, slowly as my body surrendered to gravity my only thought was, "Ahhhhh, s**t!"

The sound of my body crashing down like a lone tree in a forest echoed throughout the cathedral. My eyes tightly closed against the searing pain. I laid there like a dead person until I could assess the damage. Maybe it will be just a bad bruise, I thought. I hoped. I prayed.

"Are you OK? Can you get up?" I heard the anxiety in the voices around me. I sensed I had drawn a crowd and I could see in my mind's eye what I must have looked like-a KO'd boxer in the 12th round.

When I couldn't put it off any longer, the church docents hoisted me up and half carried me to a chair, each step an agony. As I sat on my throbbing bottom waiting for a taxi to take me to the hospital, all I could think of was how much this damn trip had cost and how, if possible, I could salvage it! 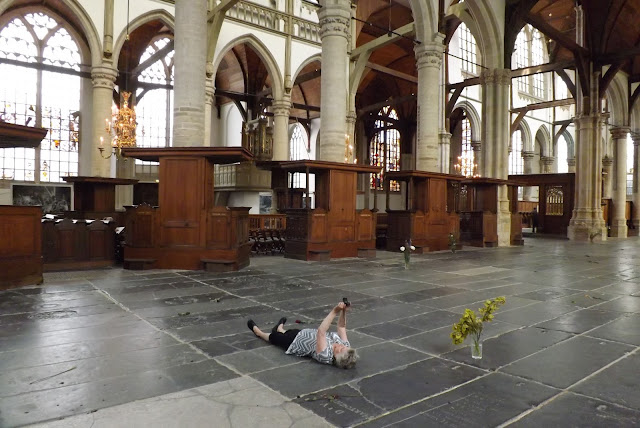 My friend, Kay, went back the next day to photograph the ceiling for me.
She took it as I should have--lying down! 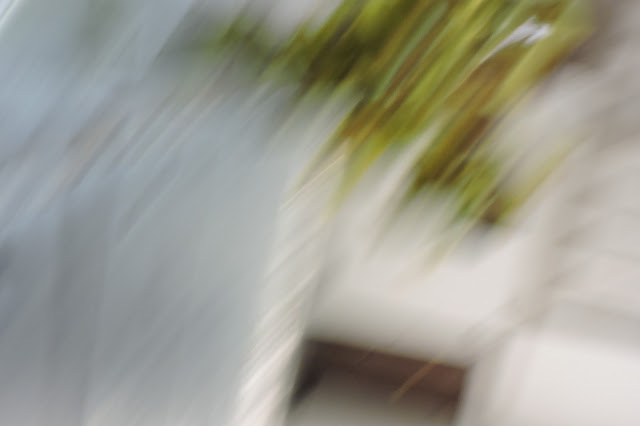 This is the picture of the ceiling I took!


A word about the marvelous health system in Amsterdam--after I had fallen, a taxi was called to take me to the hospital, which was just a short distance away. The driver was so sweet, lifting me gently as he could out of the car and staying to help me into the emergency waiting room. Thinking I had to wait for hours, as in an American hospital, I was thankfully taken right in--no waiting! Doctors confirmed what I strongly suspected, that I had broken my pelvis in two places, but did not require surgery. They prescribed pain meds and told me if I was up to it, I could still go on the cruise. I had the doctors' full attentions and was treated with concern and compassion. And, the nicest thing was, the ER bill was only about $150! I couldn't have fallen in a nicer place!! Thank you!!☺

NEXT TIME: Amsterdam before the fall!
Posted by theworldaccordingtobarbara.com at 12:10 PM No comments: