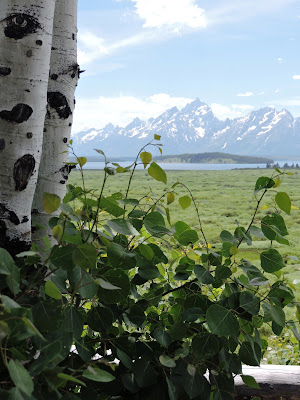 JACKSON HOLE is a lush valley that's home to several towns, Jackson being the major one, and the Grand Tetons National Park. It lies about half way down on the west side of Wyoming and is one of the most beautiful places we visited on our tour of the Western National Parks.

Leave it to lonely French trappers to see the shape of breasts in the magnificent mountain tops of the Grand Tetons. In fact, that’s what Grand Tetons means: Big Breasts, or Giant Ta Ta’s, take your pick!

We thought leaving Yellowstone would be hard, but it just got prettier and prettier the farther south we traveled. The jagged mountain range of the Grand Tetons set against a landscape bursting with flowers made me want to stop the bus, pitch a tent and stay awhile. We did stop long enough to take a few photos and visit a frontier log cabin church that is straight out of central casting. The setting couldn’t have been more picturesque. 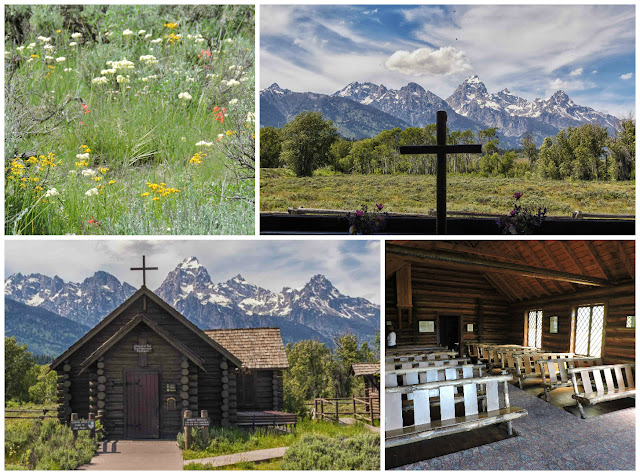 Church of Transfiguration. I think anyone could find spiritual peace sitting in these pews
with the Grand Tetons to contemplate. We stopped long enough to sip a glass
of wine compliments of our tour director and enjoy the breathtaking views.
(top right and bottom left photos compliments of Larry Miner.) 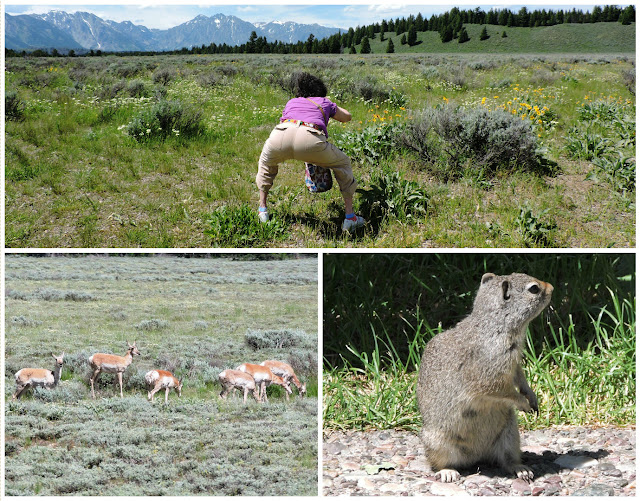 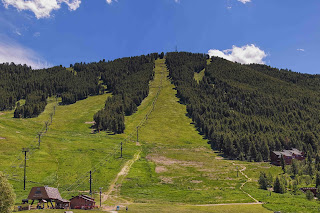 The delights just kept coming as we drove into the town of Jackson. Rich in pasture and farmland, it’s located in the southern end of the valley or “hole”. The quiet tree lined streets and uber quaint downtown pulled at our hearts as we passed through on the way to our hotel, which by the way, blew our socks off! Just a short walk to the ski lift on the edge of town, it is one of the best places to stay while in Jackson. Fully refurbished rooms and great food, the ambiance can’t be beaten. Sipping cocktails on the “veranda” after a delicious meal, feeling the cooling breeze while feasting my eyes on the perpendicular forested hills, I felt like I could take up permanent residence. (Snow King Resort)

After breakfast the next day, we headed for the Snake River to go on a “river float”. At first I thought that maybe the “float” part of this excursion had to do with our senior citizen status, but I soon realized that the thrills of this ride centered on the views and not the highs of white water rafting. With the snow capped Grand Tetons in the background, we spent two relaxing hours floating down the Snake marveling at all the wildlife. We saw eagles and their nest, several large beaver huts, pelicans, geese, and even a couple of celebrity roosts. Sandra Bullock and Harrison Ford are just a few of the famous people who have vacation homes there. I would too, given half a chance! (Jackson Hole White Water was our river rafting guides.) 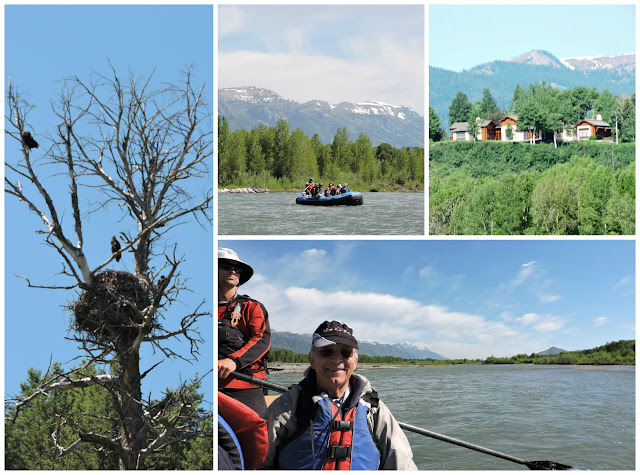 Back in town, we’re given a free afternoon to enjoy Jackson. Before heading out on my own to shop and explore, I sat for awhile and people watched in the town's center square or park. This pleasant central oasis has four unique elk antler arches at each corner. Surrounding the park is an eclectic blend of stores: clothing, jewelry, collectibles, home furnishings and art studios, most all with a western theme.  Upscale and unique, the shopping is a nice experience in itself. The cornerstone of the square is probably the Cowboy Bar, famous for its saddle bar seats and fun honky-tonk atmosphere. Sandra Bullock celebrated one of her birthdays here and I could see why. It looks like a great place to hang out, especially after a hard day of shopping! 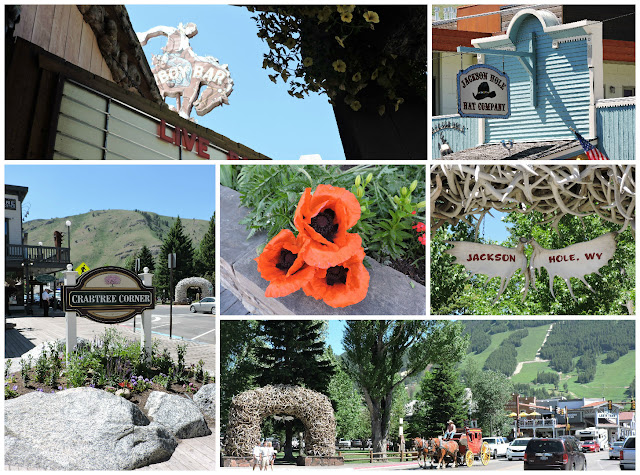 Downtown Jackson, nestled against the southern rim of the Hole/Valley.

I ended this perfect day with a fantastic dinner at the Cafe Genevieve, advertised as specializing in everything pork.  I ordered the pulled pork sandwich topped with a divine coleslaw. Talk about yummy; I just had to take a picture of it before I ate every last crumb! P. S. Check out their Pig Candy next time you're in town--no kidding! 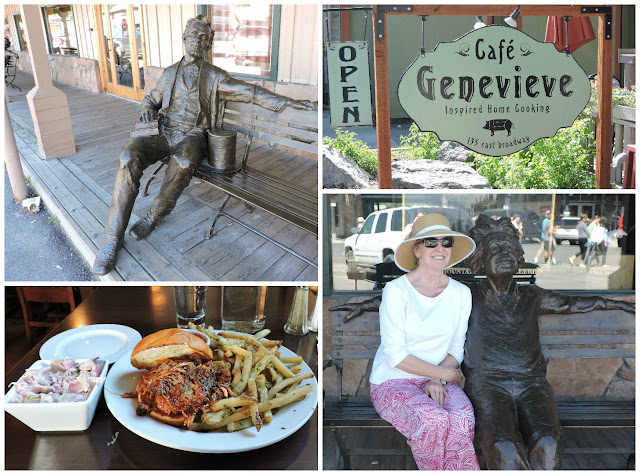 Before dinner at Genevieve's, I had to pose with my friend, Albert Einstein, who
has taken up permanent residence in front of Mountain Trails Gallery along with
several other dignitaries.  The Gallery, located right across from the main square, is
filled with stunning bronzes and paintings and is definitely worth checking out!

I am going back, that’s a promise. There is something so special about Jackson and Jackson Hole. Maybe it’s the peace and hometown feel of the town of Jackson. Or possibly it’s the allure of year round delights, from the brilliant colors of fall filled with the longing songs of love sick moose, to winter skiing and summers on the river, it has something for everyone and for every season.

This is what Karol looks like from the front. She is a born entertainer and is a total kick to be around. Happy trails, Girlfriend!

Next time: Salt Lake City and more Karol!
Posted by theworldaccordingtobarbara.com at 2:27 PM