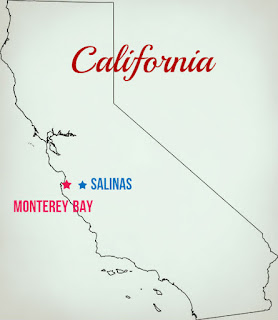 I love all of my home state of California. There are endless things to see and do in this, I think, the most beautiful state in the Union. Recently, my friends Kay, Tom and I and several friends discovered a delightful new adventure right in our own backyard.  As a special treat for Kay’s recent milestone birthday, we packed our bags for an overnight stay on a California Serengeti, tents and lions and elephants and all! Along the way, we discovered a few more wonders that California has to offer—all within a few miles of the Salinas and Monterrey Bay area.

Vision Quest Ranch is a dream come true for founder, Charlie Sammut. Although he started out in a career as a policeman, his passion for animals he’d had since childhood never left him. Still working in the Police Department, he launched a successful dog kennel business, and then one by one began to rescue large exotic animals. The animals rescued from circus’ and private parties, came to him sometimes in very sad shape. To pay for their care, he created a non-profit wildlife haven, and eventually purchased a 51 acre site outside of Monterey in Salinas. To make it a unique adventure for visitors, he built safari like tents surrounding the animal compound. And, that’s what we all came to experience--Bed and Breakfast--with the elephants! 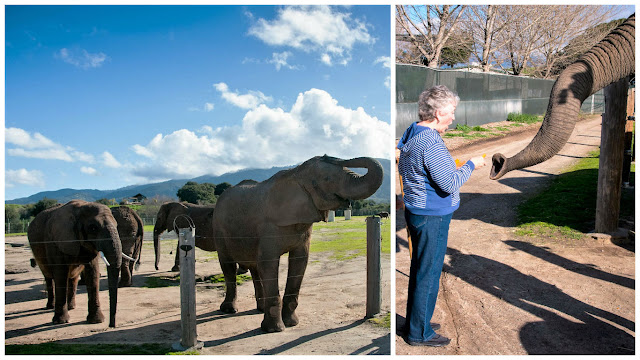 Greeted first by the elephants, we all had a chance to feed them carrots which they
could have just kept scooping in their mouths if we hadn't run out! Kay, who adores
animals, was in heaven! (Photos courtesy of Mark and Kathy Triolo) 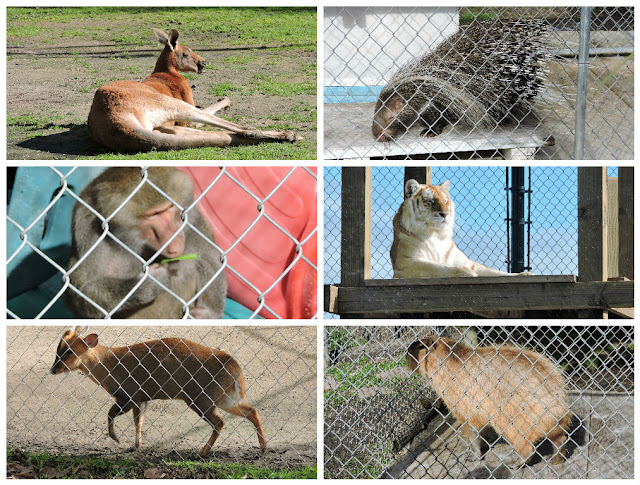 Next, our guide gave us a tour around the compound of large pens.
We saw kangaroo, porcupine, monkeys,large cats of all sorts,
birds, bears and many, many more. 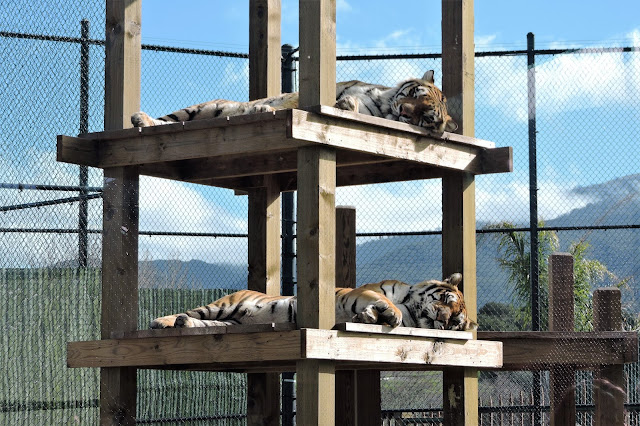 The large cats live in one of the just completed compounds that gives them huge spaces to
roam. Plexiglass fronts on the compounds makes it easy to view the animals. These
are some contented tigers!

This guy was in dreamland when we saw him, but he certainly got our attention at night!
Every 2 to 3 hours I would bolt upright and wide awake in bed as he let loose with a few
hair-raising roars! I'm sure they could hear him in the next county! 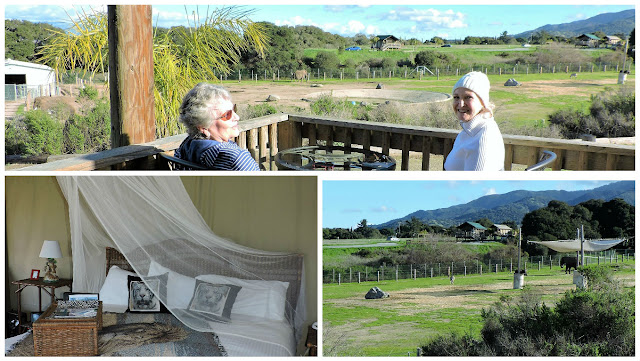 Kay and I enjoying the view. (You can tell by the hat that I was the only one in the group who was always cold. I just could not get warm even though the tents had space heaters. This was in February and I'm from San Diego after all!) The other tents are scattered around the large compound where the elephants,one ostrich and a couple of water buffalo roam. On the upper left, is the building where the elephants spend the night. We could watch them being washed and fed from our own front porch. 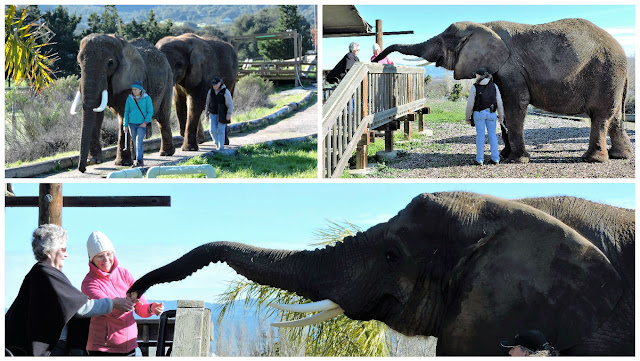 The moment we were all waiting for came the next morning when the
elephants and their trainers came by each of the tents to deliver a continental breakfast.
The elephants, of course, came along for the hand-outs, this time for apples as well as carrots.
This absolutely made the trip! 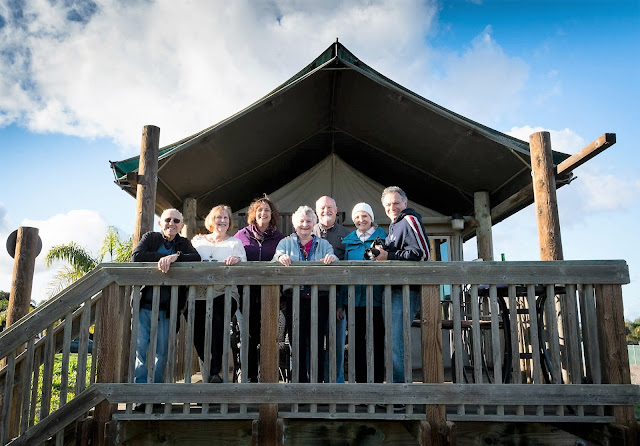 A Gaggle of Friends!
Let to right, George (who also celebrated his birthday), wife Gayle, Kathy, Birthday Girl, Kay, husband Tom, Barbara (me) and Mark, Kathy's husband. We are on the deck of one of the authentic Serengeti style tents on the Vision Quest Ranch.

Since we were in the area, we couldn't pass up going to the world famous Monterrey Bay Aquarium. No matter how many times I've been there it never gets old. First of all, the setting is stunning. Located right on the bay, the sound of the waves, local seals and birds fill the air while the ocean breezes mysteriously seems to whet the appetite for fresh seafood! 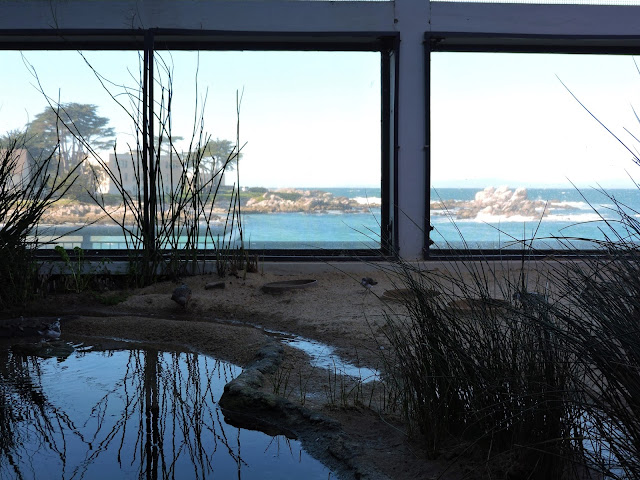 Dedicated to conservation of the many fish, animals and plant life of our California coast, the Aquarium is both educational and a treat for the senses. It really is a must see for people of all ages. 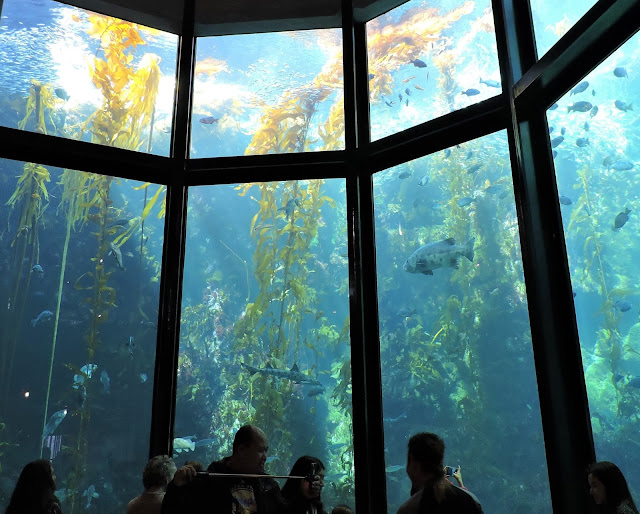 The two story aquarium is mesmerizing. I could spend hours just watching it like a movie.
Tree size seaweed sway in the current while dozens of native California fish swim
lazily around and around. 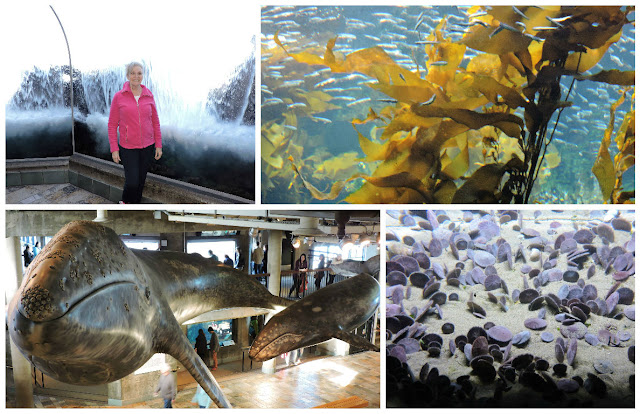 The Aquarium is so close to the water, you can experience waves crashing right over your head!
Left to right, top: Wet waves and dry me,  and gigantic seaweed.
Bottom left: life-sized models of humpback whales, which can be seen at certain times of the year  off the coast from the Aquarium.  Bottom right: thriving sand dollars.


Video of just one of the huge tanks of jelly fish!

The John Steinbeck Museum in Salinas

Located very close to the wildlife sanctuary, Salinas is the home of John Steinbeck's Museum. Besides being one of my favorite authors, the museum is beautifully curated, very photogenic and well worth seeing.

Steinbeck lived nearly all of his life in and around the Monterey/Pacific Grove/Salinas area. (In fact, his childhood home is in walking distance from the museum.) He drew his stories from the agricultural and fish canning industries and the lives of their owners and workers. One of the recurring themes of his novels focused on the sometimes cruel treatment of migrant workers and those beaten down by the depression. Yet, at the same time, he celebrated the resiliency of the human spirit to survive. Many of his books were made into movies, "East of Eden", "Cannery Row", "Tortilla Flats", "Grapes of Wrath" and "Of Mice and Men", all staring some of the biggest names in Hollywood at the time.

"Travels With Charlie" is his account of a a road trip he took in 1960 around the United States with his dog Charlie. It's a clear-eyed look at the joys and at times loneliness of solo traveling. He enjoyed meeting people all over the U.S., but when he entered the south, his journalistic side couldn't help but point out the still present injustices against southern African Americans. That experience left him depressed and longing to go home, which is a testimony of how deeply he cared about the downtrodden. His custom made camper now resides in the museum. 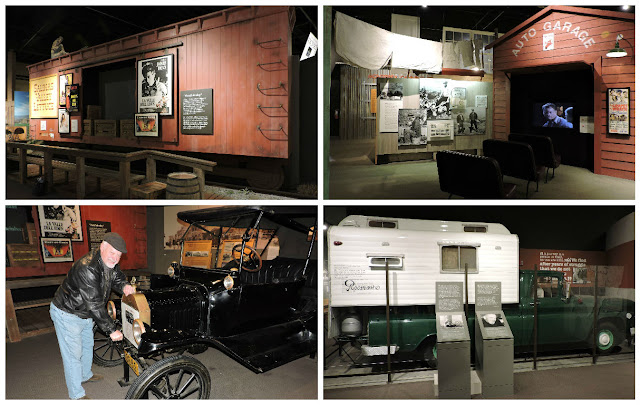 Upper left is the "East of Eden" display with movie posters picturing James Dean. Upper right is a display of "Grapes of Wrath". The visitor can sit in old bus seats and watch excerpts of a performance by Gary Sinese. Lower left is Tom cranking up the old tin lizzy from the movie, "East of Eden". Lower right is the custom camper made especially for John Steinbeck for his 1960 around the states trip. There is no bathroom or kitchen. He really roughed it.


We headed home after visiting the Aquarium, but not before treating ourselves to big steaming bowls of clam chowder served with hot sour dough bread. No one can pass up a seafood meal fresh from the ocean and we are no exception! 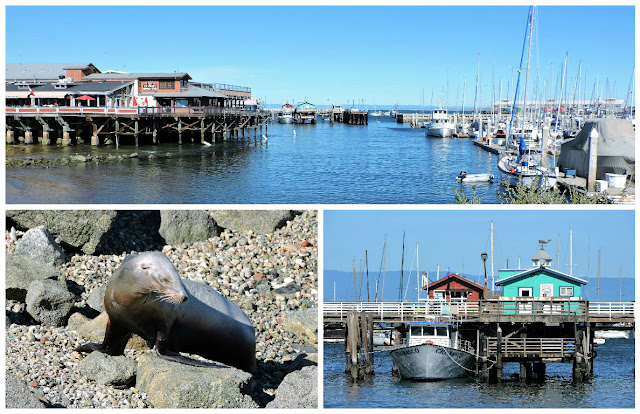 There are countless places to eat, but you can't beat eating at a restaurant built over the water.
From water to table--it doesn't get any fresher than that!

Next Time: River Cruising on the Rhine with Viking Cruise Line!

**Many thanks to Mark and Kathy Triolo for their wonderful photos of the Wildlife Sanctuary!!

Posted by theworldaccordingtobarbara.com at 10:32 AM No comments: