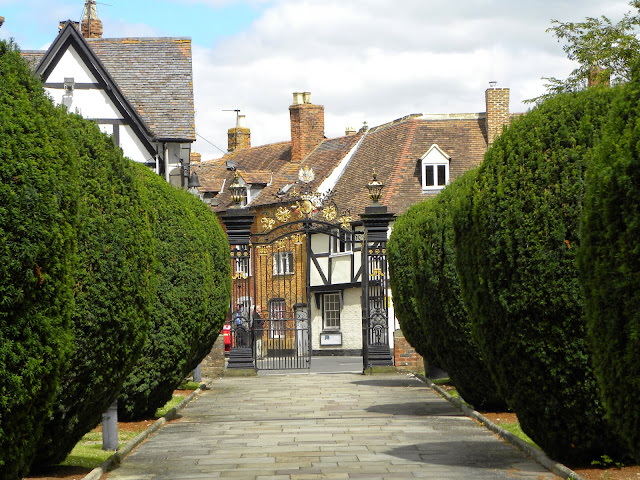 “I can’t find it!”
“What?”
“Tewkesbury. I can’t find any reference to Tewkesbury in Rick Steves’ guidebook on England. He doesn’t even give it an honorable mention!”

Well, I’m sorry to say that if you haven’t visited Tewkesbury, Rick, you've really missed out. Talk about a pleasant surprise! My friends and I anchored our canal boat on the River Avon right in the heart of Tewkesbury for a couple of days while we explored this unheralded, but very charming town. 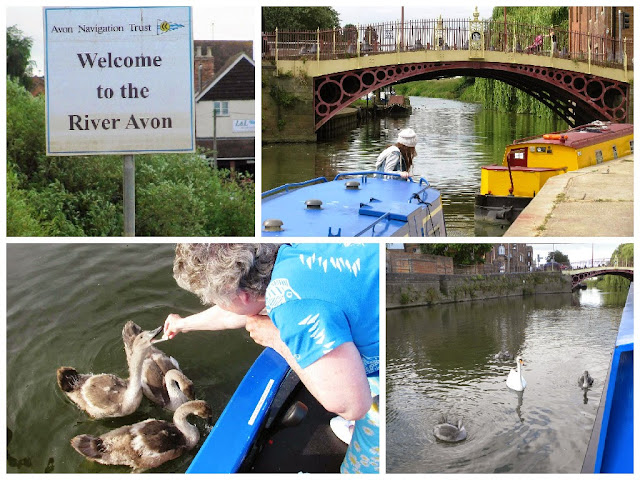 "Captain" Tom skillfully piloted our longboat through the lock that links the Severn
to the Avon River and the town of Tewkesbury.
Mother Swan and her ducklings came every morning for a handout.
They seemed to know that Kay was the easy touch on the boat!

After settling in, our stomachs led us on a search for food, which we found just a short walk down the path along the river. Going over the Avon at an ancient crossing point that’s existed before the Romans, we ran into a equally ancient pub called the Black Bear Inn. Built in 1308, the Inn got its name from the arms of the Beauchamp family, the Earls of Warwick, who essentially owned the township.

Our waitress seated us at a long trestle table, gnarled and black with age. It stood in what had been a stable, so like obedient old nags, we happily put our feedbags on and enjoyed the good pub food! 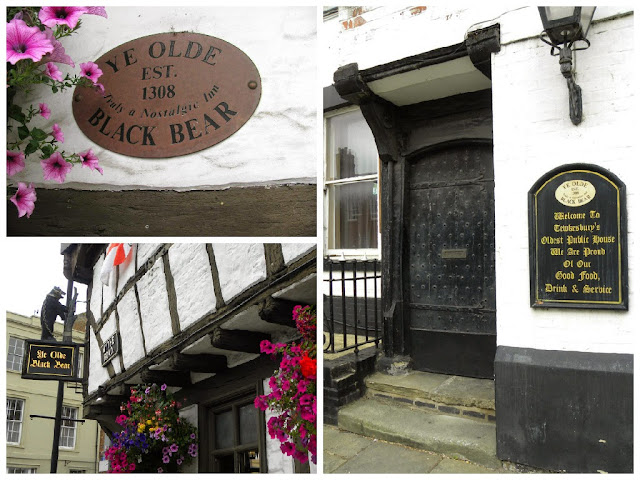 The next day, we got going early and trundled downtown to explore. The streets, quiet at that time of day, looked much like so many other English villages with quaint, timbered buildings, sagging roof lines and cockeyed windows. And, of course, there were flowers everywhere. 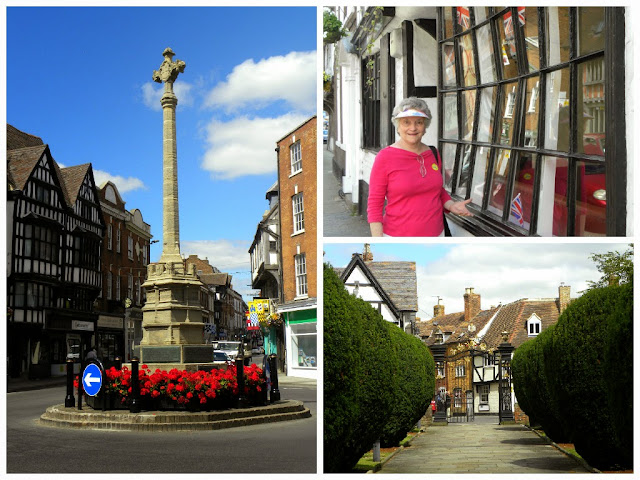 We eventually made our way to the centerpiece of town, Tewkesbury Abbey. Surprisingly big, it begins to impress the visitor at once. Placed on several acres of land planted with rare and exotic trees and shrubs, it is hard not to do anything else but admire the grounds. 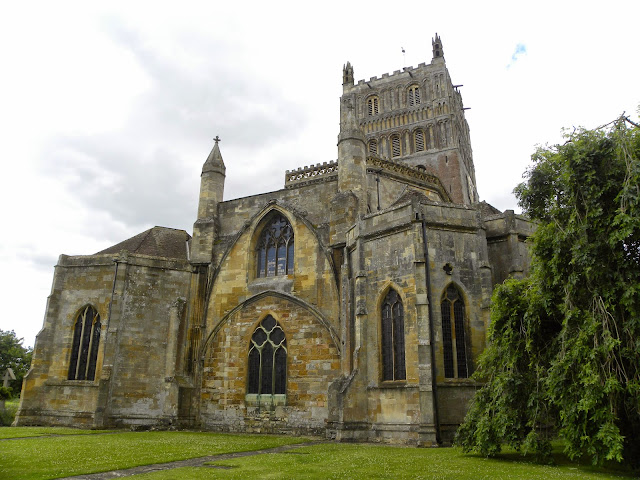 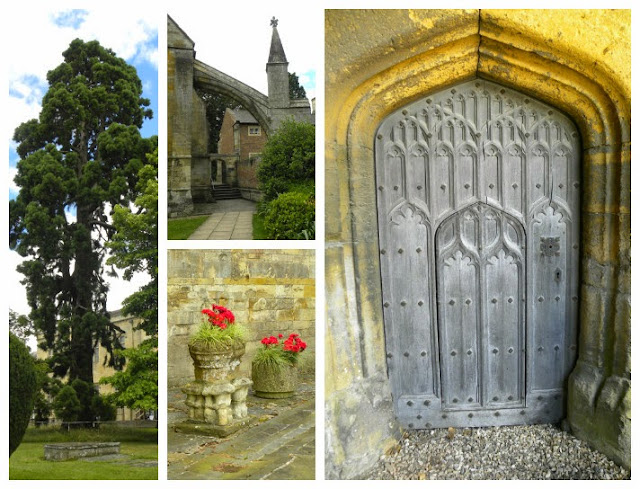 The tree on the left is a gigantic Sequoia! I had no idea they grew in England,
then I began to notice them all over. Fancy that! Redwoods in England!

Finally, we entered into the Abbey and frankly were shocked. Spectacularly grand in scale and beauty, we knew instantly we had discovered a gem. How had this lovely cathedral sized Abbey fallen under the guidebooks' radar?

Built in 1121, the Benedictine Abbey is one of the largest parish churches in the country. It fortunately survived Henry the VIII’s monastic ravages thanks to the townspeople who bought it from the King for 453 pounds (the cost of the lead in the bells). 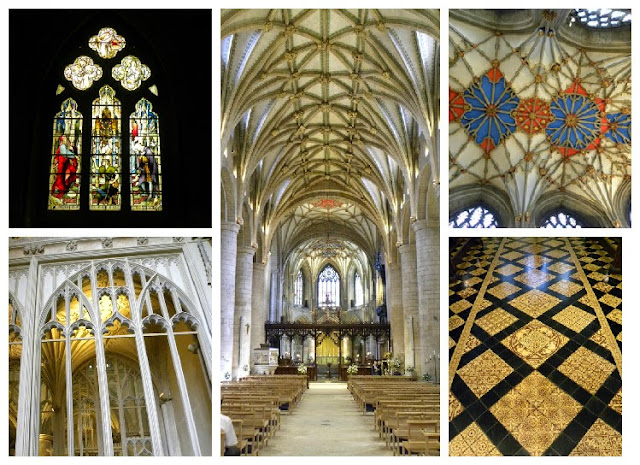 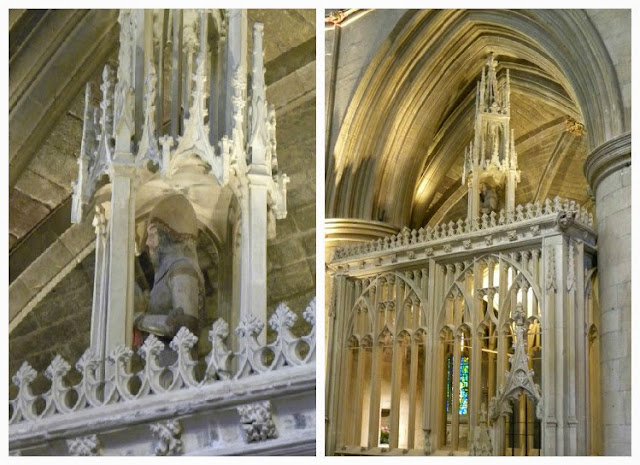 The chapel of Edward, Earl of Warwick, Duke of Cornwall and Lord of Tewkesbury.
Son of a king himself, he is famous for being second in command to the Black Prince.
His effigy faces the alter in eternal prayer. It's worth visiting this Abbey
just to see if you can find the Earl. Hint--he's hidden in the rafters! 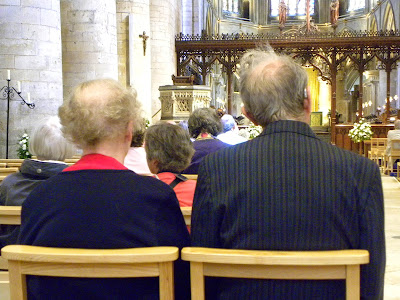 We were just in time for a special organ recital.
Joining with these dear townspeople, we felt right at home. 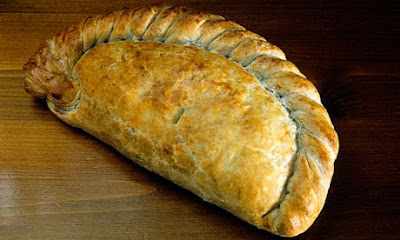 For the rest of the day, we wandered around the peaceful downtown. Kay bought a pot of local mustard and we loaded up on a variety of mouth watering pasties for our dinner. A perfect way to end a very pleasant day!

Next Time: The Cotswolds!
Posted by theworldaccordingtobarbara.com at 11:06 AM 1 comment: