THE RUGGED AND ROMANTIC COAST OF CORNWALL, ENGLAND 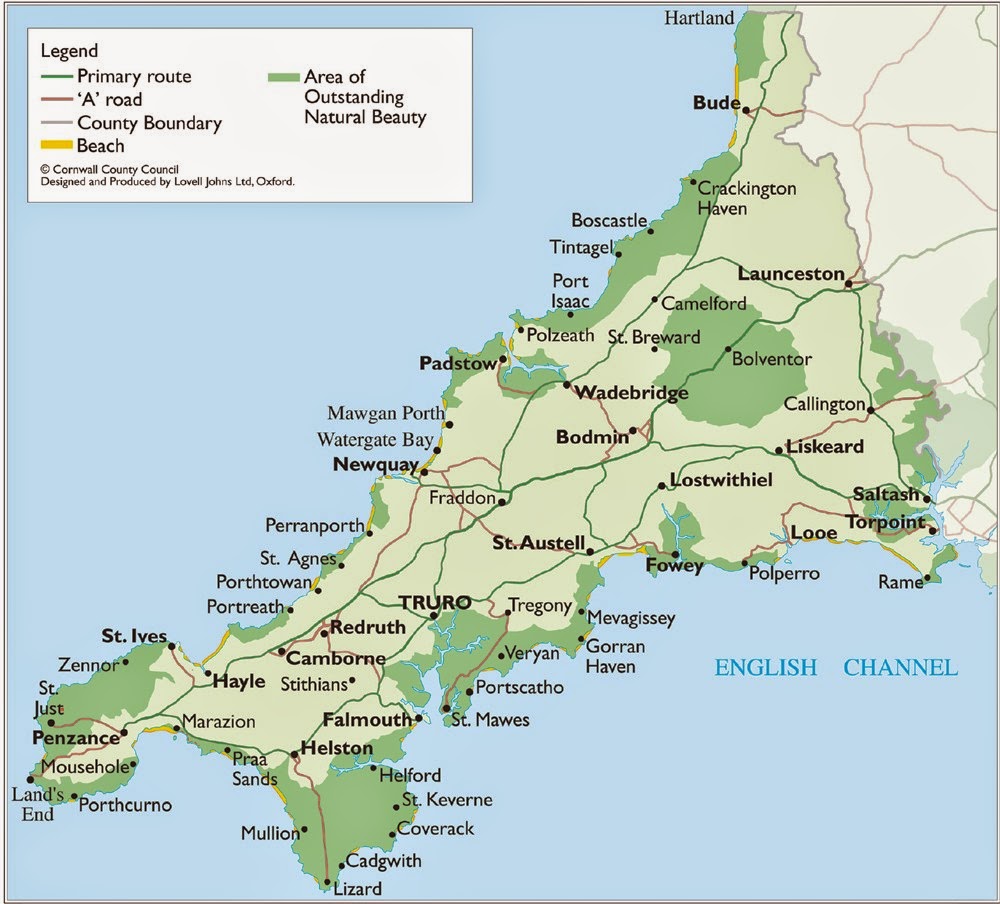 The Romantic Cornish Coast of England

When I think of Cornwall, I think of sleepy fishing villages, rugged coastlines, hedgerows and Doc Martin.  OK, I can just hear some of you asking, “Who??” For those of you who haven’t watched “Doc Martin” on your local PBS station, you are missing out. It’s an English comedy about a socially inept doctor who has a general practice in a coastal Cornish town called Port Wenn. (*Port Wenn is the fictional name for the real town of Port Isaac, located halfway between Tintagel and Polzeath.)

From the moment I saw the camera panning across Port Isaac and its achingly sweet  cottages perched on steep and narrow streets that tumbled towards a tiny, crystal blue inlet, I was hooked. I had to see it.  But, I couldn’t find a major tour company that went there!  I was really disappointed because seeing Port Isaac was one of the main reasons I wanted to tour Cornwall! So, I asked Stephen, our guide, if there was any way we could make a side trip to Port Isaac and his answer was, unfortunately, no chance. However, I began to perk up when he told me that the Cornwall coast is peppered with several little “Port Wenns” and our first stop should make me feel better. It was Tintagel, home of King Arthur.

"He was a real king, you know, Arthur--a Celtic King." As we watched the breathtaking Cornwall coast stream by our windows, we listened as Stephen painted a verbal picture of the history of this land and of Arthur. He explained how, in the 12th century BC, a group of people from central Europe, who referred to themselves as Celts, immigrated to the island, living peacefully until 43 AD. It was then that Rome set out to claim the island for itself. However, the Celts proved to be pretty tough cookies and all the Romans could do was to back them into the perimeters of the island now known as Scotland, Wales, Cornwall, Devon (and Ireland). When the Romans withdrew from the island 400 years later, they left a power vacuum which gave the Saxons and Angles (tribes from modern day Germany and Scandinavia) the opportunity to invade.

The Celts were successful in warding off the Saxons until the 6th century when they were again forced back into the outer perimeters. It was at this time Arthur was born. The earliest references to Arthur described him as a fierce warrior and leader, but was he a king? Whatever is true, over the years the real man became the stuff of Celtic legend, a hero whose accomplishments were later romanticized into the King Arthur we know and love today. So to the question, is Arthur a man or myth, the answer seems to be, both.

Tintagel, The Birthplace of King Arthur
Tintagel (tin-TAE-gel), Cornish for “village on a mountain”, certainly lives up to its name. Perched on the perilous edge of a high rocky cliff overlooking the turbulent Atlantic Ocean, it couldn’t be more romantically wild and remote. And, that’s just the village. Clinging dangerously to the very edge of those granite cliffs and crashing waves, are the ruins of a 13th century castle. The castle, built by Richard, Earl of Cornwall, was constructed long after Arthur was born, but it isn’t hard to imagine Camelot among the ruins. Recent excavations have found much earlier evidence of a monastery there and before that, it was an important Celtic fortification, giving even more credence to the existence of Arthur, the real man. 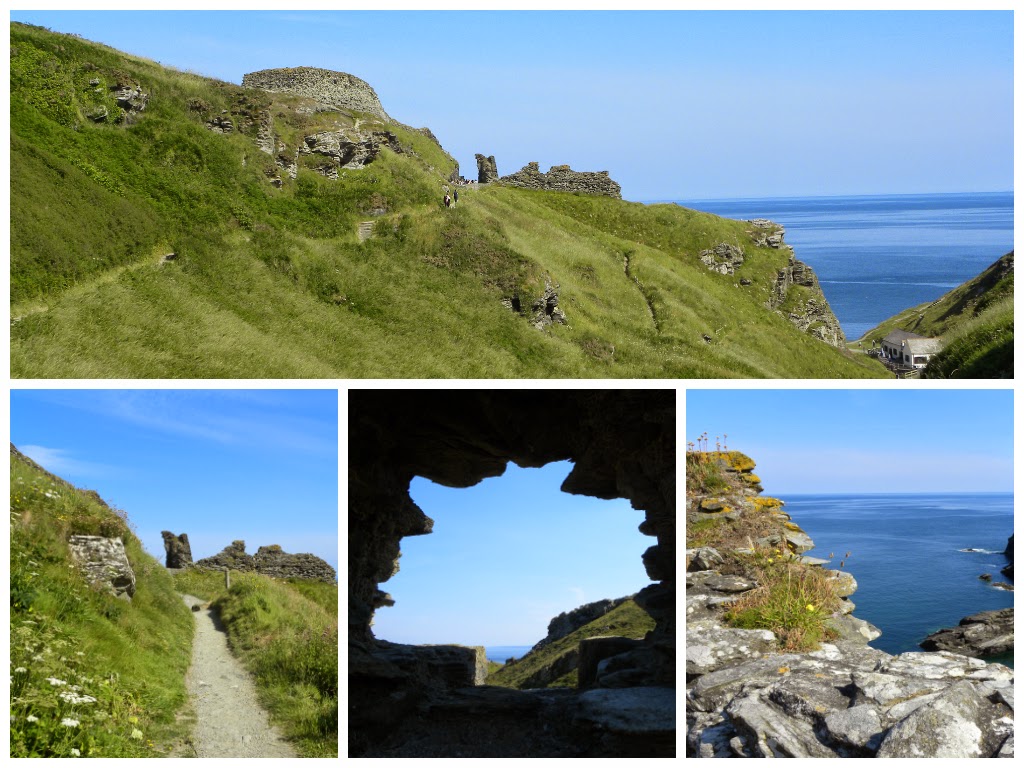 Ruins of Tintagel Castle, built by Richard, Earl of Cornwall 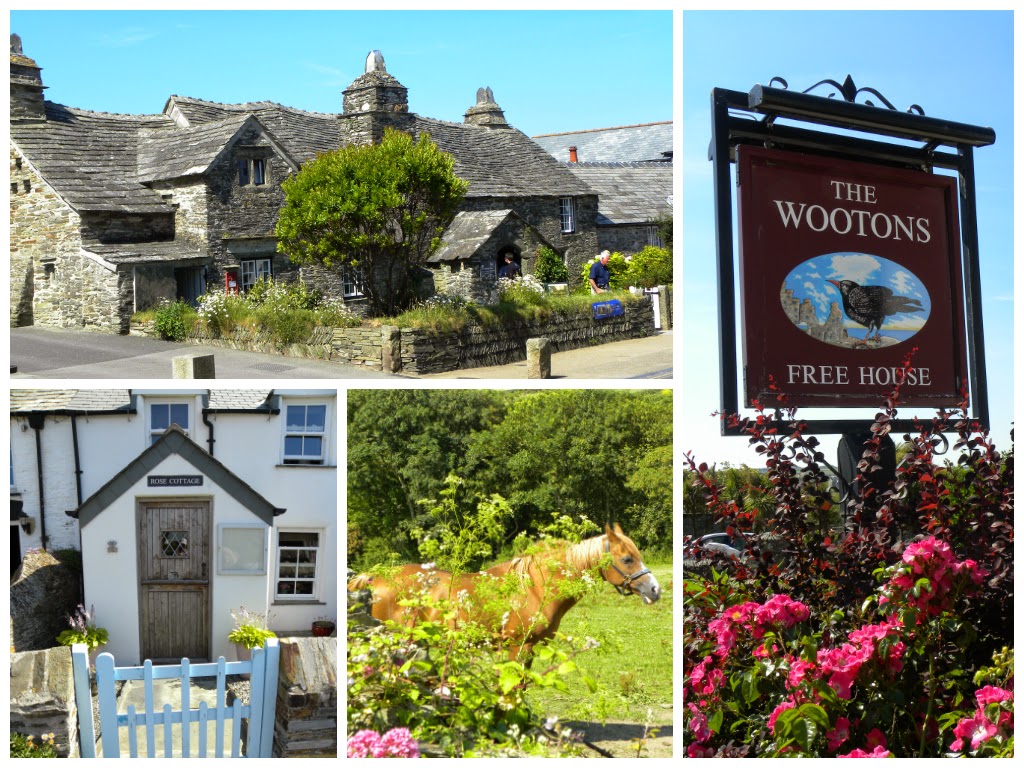 The village also features the 'Old Post Office" (upper left) which dates from the 14th century. It became a post office during the nineteenth century.

Like the fictional Port Wenn, Polperro’s steep and narrow streets tumble down towards a crystal blue inlet filled with bobbing, rainbow colored fishing boats. The cobbled lanes are about a donkey cart wide and the cottages are festooned with flowers of every description. It looked like a living postcard! If I was disappointed in not seeing Doc Martin’s digs, Polperro made up for it. 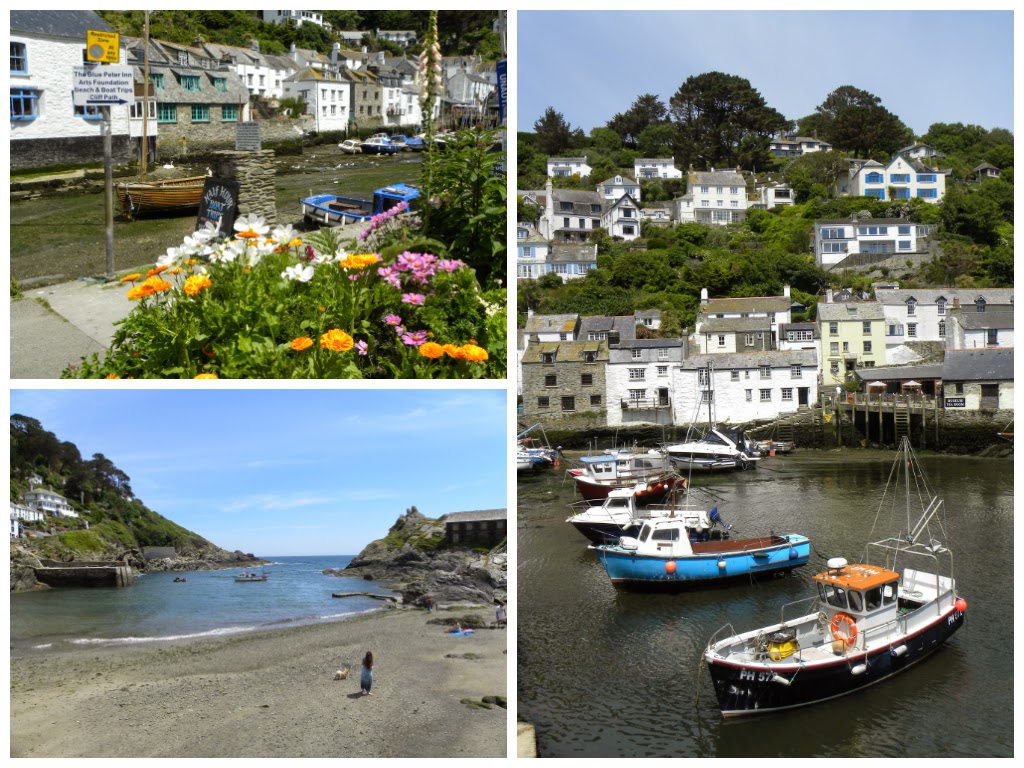 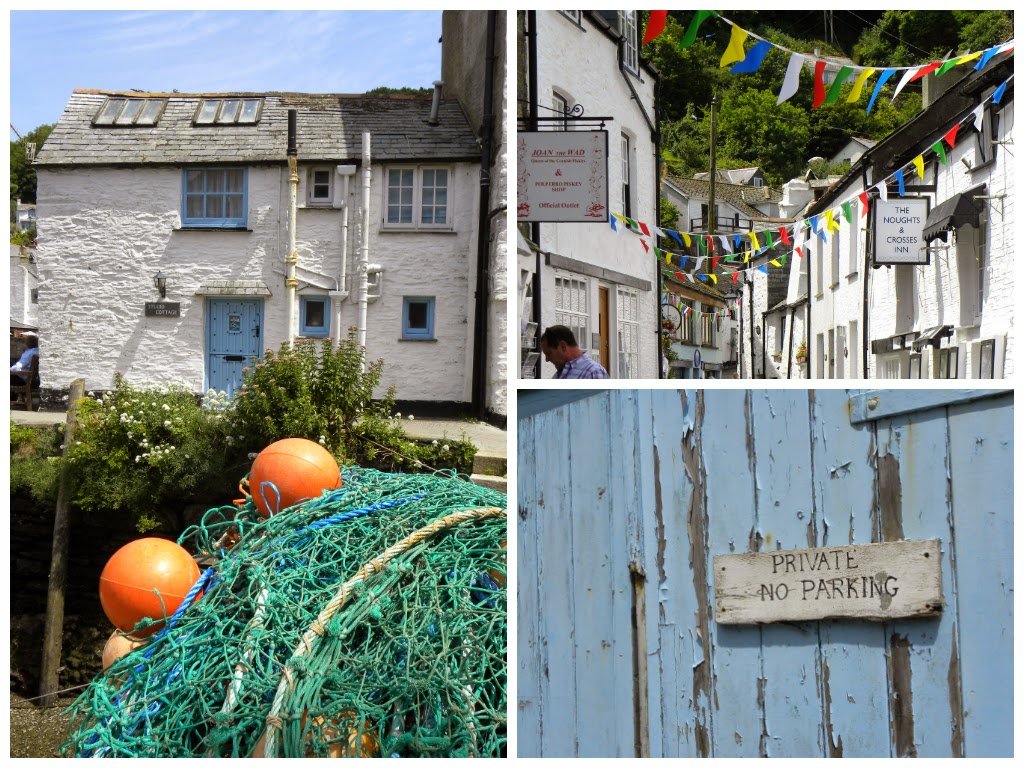 Scenes of Polperro, located on the southern coast of Cornwall on the English Channel.

We stayed long enough for a little window shopping, lunch and an exhibition of Seagull skullduggery. Making my way back up the main road to the bus, I noticed two couples walking beside me busily licking their newly purchased ice cream cones. All of a sudden, I heard one of the ladies scream, and when I looked to see what happened, I heard her say, “That (blankity-blank) seagull just took my ice cream right out of my hand!” 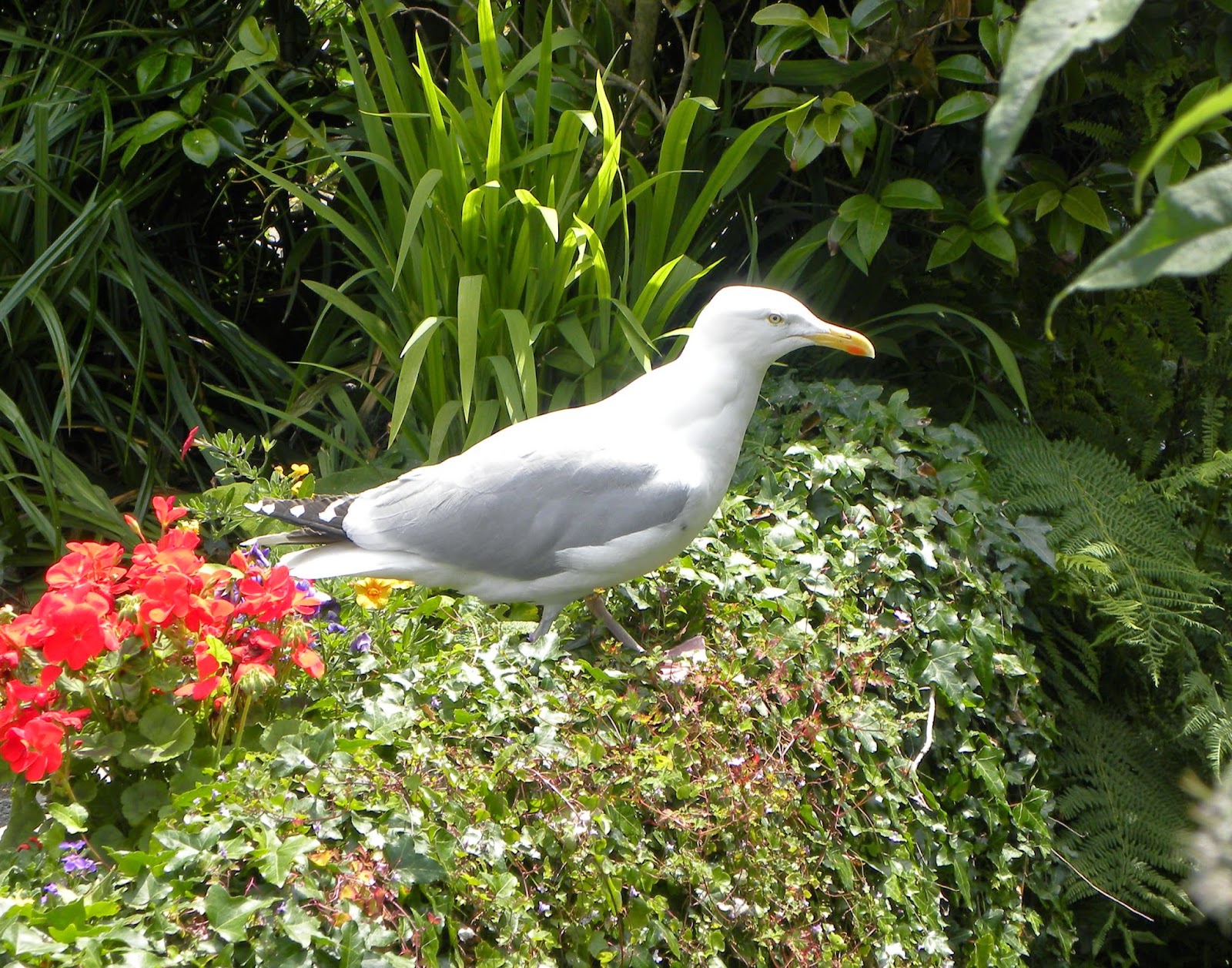 Now, these seagulls are not small! They are the biggest, fattest seagulls I’ve ever seen. Not too much later, I had a chance to actually see it happen to someone else and I was amazed.  With all the precision of a dive bomber, a seagull swooped down, bumped the person off balance, and then in midair, unceremoniously snatched what he was after faster than you could blink. Before I had a chance to get my camera up to my eye, the cheeky little devil had already chucked it down!

After leaving Polperro, we drove through miles and miles of narrow roads lined with spectacular English hedgerows on the way to a local farm. Many times, the bus had to pull over and wait for another car to get around us, and when that happened, I had a chance to get a good look at what made up a hedgerow. There must have been at least 20 different plants in each one: everything from ferns, thistles, climbing roses, berries, and the tallest grasses I’ve ever seen. Honestly, some of those hedges are 10 to 15’ high, and sticking out of the top and waving in the breeze are several different varieties of grasses. Steven told us that at one time, farmers tried to get rid of them, but they found out that the hedgerows prevented erosion. Prince Charles, the champion of the hedgerow, instituted a program to replant them, and now they are back in all their botanical splendor. 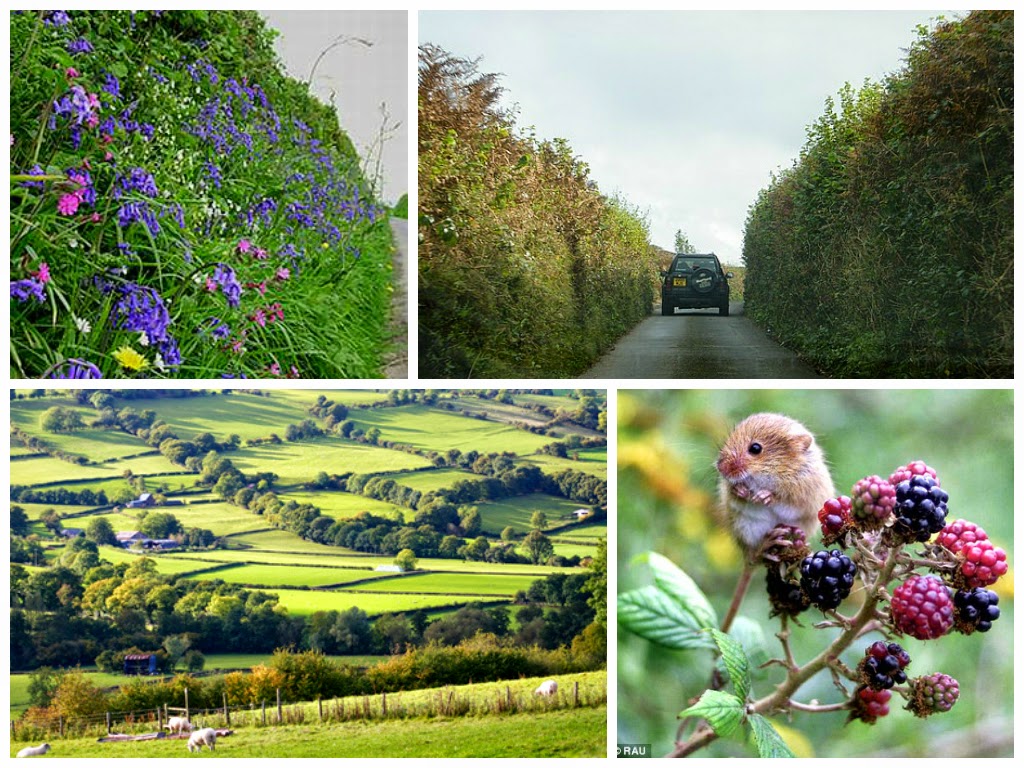 For a chance to meet a local Cornish family, we stopped for a traditional Cornish Cream Tea at Trenderway Farms. Cornwall is nearly all agricultural farm land, and this was a lovely spot surrounded by nothing but sheep, chickens and hedgerows. It wasn’t as intimate a gathering as I’ve experienced on other tours when we’ve met the locals. Here, we only briefly met the farmer and then tea was served. It was all rather formal and stiff, and unfortunately, not very enjoyable. However, they did have some very handsome chickens. After chasing down a couple of hens to pose for pictures, we soon boarded our bus and headed back through the hedgerows and on to our hotel for the night. 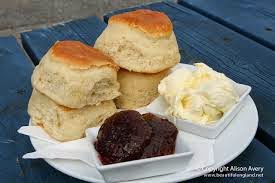 (*Cornish Cream Tea: Cornwall and Devon are famous for making a clotted cream to smear on your scones that’s to die for. Whipped to a creamy goodness, it is a cross between whipped cream and butter. The art is to make a mound about the size of Mt. Vesuvius with the clotted cream on your scone, and then very carefully top it with a heaping helping of jam without it all falling into your lap.) 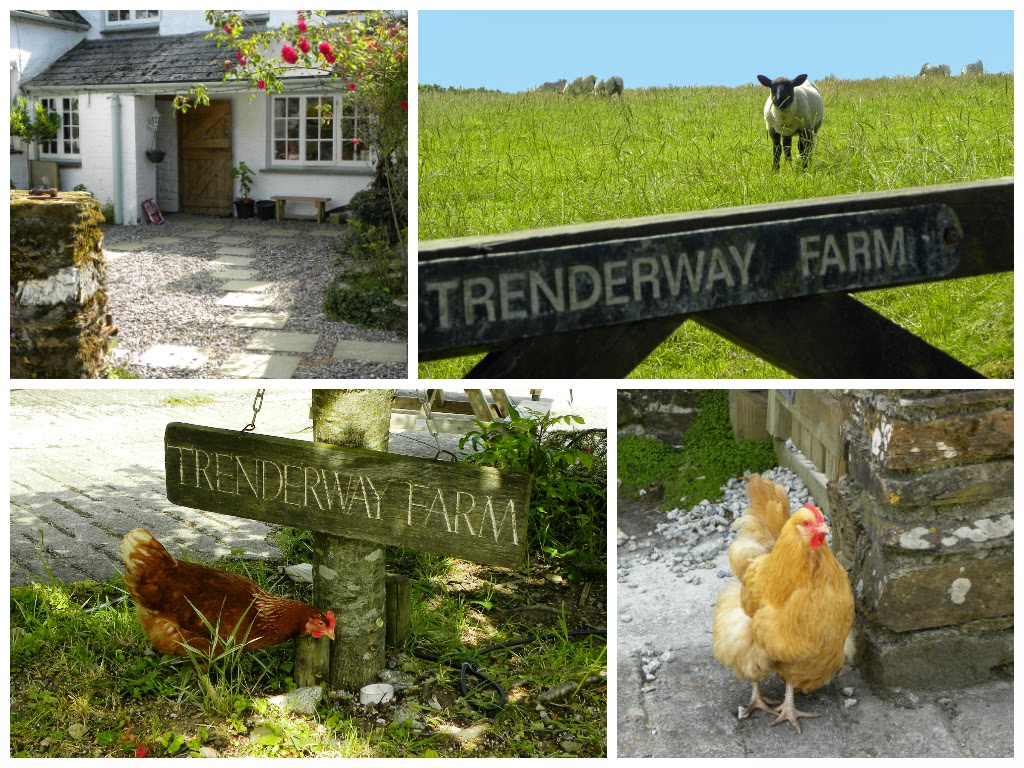 (**Picture of Doc Martin and the scones and jam are courtesy of Google Images.)
Posted by theworldaccordingtobarbara.com at 12:32 PM