STONEHENGE AND BATH--A PAGE FROM MY JOURNAL


While driving through London on our way to Stonehenge, I'm impressed by the profusion of flowers and not a dead bloom among them. Why can't I grow flowers like that?  Half of mine die and I struggle to coax the other half to just hang in there. Maybe it's because Londoners have little land. If they're lucky they may have a small garden; some have balconies which they fill with pots and pots of showy begonias and prolific geraniums. Window boxes are everywhere to add a bit of color and nature to soften a largely brick and stone city. 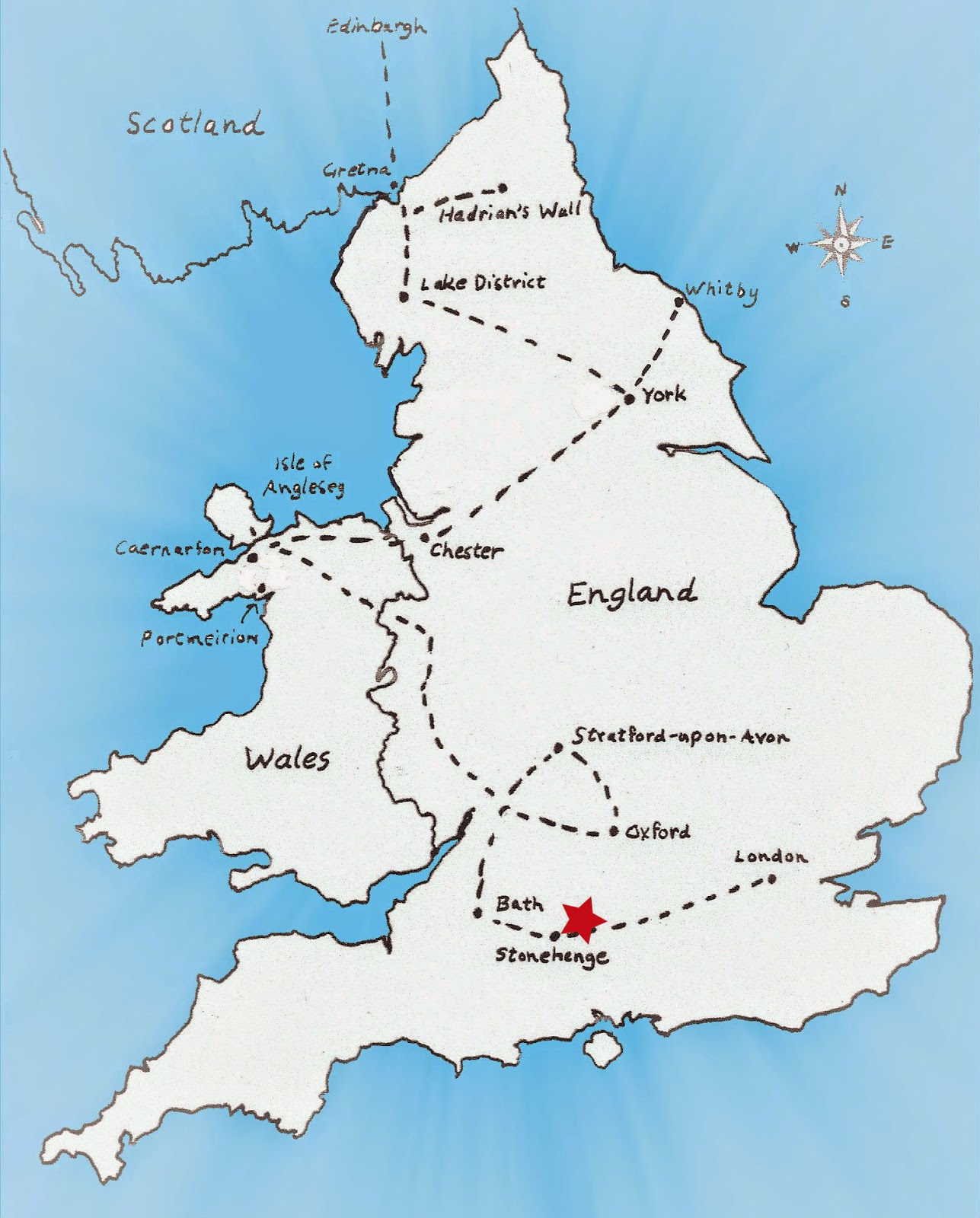 Roped off and inaccessible, Stonehenge looks small and unimpressive. After years of waiting to see this mysterious monument, I was extremely disappointed to find that I couldn’t get any closer than a few hundred feet to it. I didn't feel any connection to it at all; it might as well have been just a pile of stones as far as I was concerned. Of course, I could understand the necessity of protecting them, but this was ridiculous.  I almost needed binoculars!

(Fast forward to 2014. I got to see it again and this time was a great improvement! The keepers of Stonehenge must have heard this complaint loud and clear because we were able to get much closer, about 15 feet from the western side of the monolith. I was thrilled!  The stones weren’t close enough to touch, however, they were close enough for me to get an idea of their sheer size and mass. This time I felt what the builders intended: that this is a place of great importance, a place that commands respect and reverence. I was very, very pleased to have had a second chance to experience Stonehenge!!)

This is how close you can get now!

The Standing Stones of Scotland

Truthfully, I had a better experience in Scotland in 2009. Every day on the road out of Kenmore where our timeshare was located near Loch Tay, my friends Kay, Tom and I drove by a sleepy farm with what looked like a mini Stonehenge in it. I thought it had to be some sort of tourist attraction because I couldn't believe anything of real importance would just be lying around unheralded in some one's cow pasture. We found out later to our amazement that it was a genuine prehistoric stone circle called the Standing Stones of Croft Moraig. We also learned that there are dozens of stone circles like it in Scotland but the standing stones in our humble field were the most spectacular in the area!

We made sure to stop the next time and climb over the farmer's fence to get a closer look. Knowing that this ancient monument had been important to many long ago souls, we touched the stones' worn pitted surfaces to see if they would speak to us but, alas, if they had anything to say, they kept it to themselves.  Oh well, it was still fun to wander through them and wonder about its mysteries.

Bath is gorgeous. The entire town is built of the same palomino colored limestone I saw in St. Peter's Chapel in the Tower of London giving all the buildings a look of soft inward warmth.The city of Bath was designed in the Greco-Roman style of the Georgian era with its signature stone provided from a local quarry, and its purpose was always to be the finest of resorts. 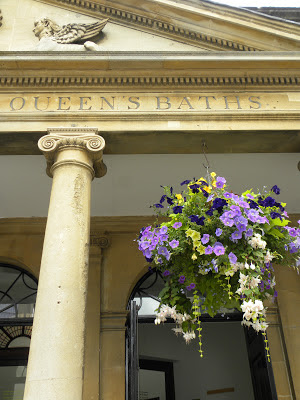 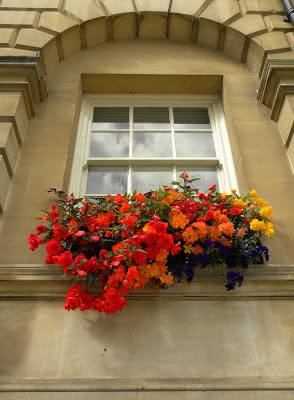 Flowers are everywhere splashing vibrant yellows, reds and greens against the honey hues of the limestone.

The Romans discovered the hot mineral springs soon after conquering Britain around 43AD. Big on bathing, it didn't take them long to build a large sophisticated communal bath complex complete with hot, warm and cold plunges and a few temples to the gods thrown in. They called their little community Aquae Sulis and enjoyed it for another 400 years. After Rome's downfall, however, the baths were abandoned and allowed to silt up. It wasn't until around 1687 when Queen Mary experienced a healing of sorts in the mineral waters that the town began to be revitalized into a spa resort. The old bath site was rediscovered in 1880 buried under 18 feet of dirt. It has been carefully excavated with some parts of it rebuilt and is now a wonderfully preserved example of a classic Roman bath. 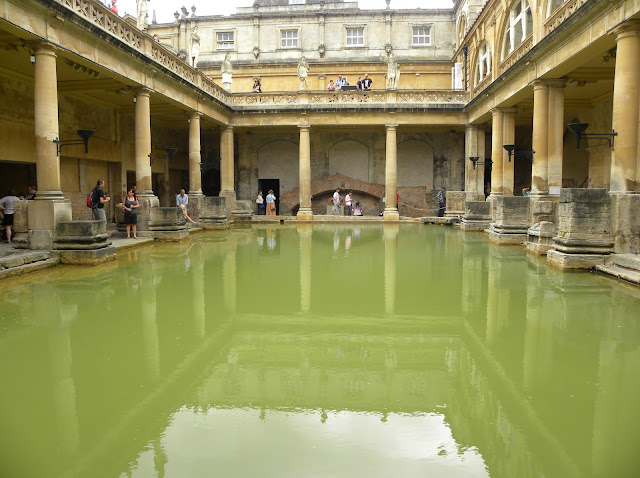 We are given only three hours in this lovely city, most of which was spent wandering the Roman baths which is its main attraction.The scale of the bath's restoration is impressive and the accompanying museum and displays are well worth the time spent. However, it isn't the only item of interest in the town. For example, the famous Georgian style Townhouses built in a crescent shape reflecting the style of Roman architecture have been written about by the likes of Jane Austen and seen in numerous movies.We stopped to see them on our way out of town having just enough time to take a few pictures.

I did have time after touring the Baths to sit and relish a divine lunch of a melt-in-your-mouth hot pasty (a Cornish miner's meat sandwich made with pie crust) while sharing a table with three lively Australian ladies. I then wandered past Bath Abbey and discovered a peaceful garden on the banks of the Avon River called Parade Gardens. The gardens like the town were lavishly embellished with brilliant blooms. 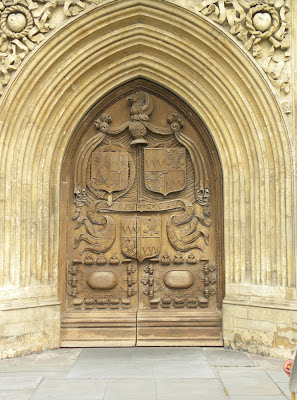 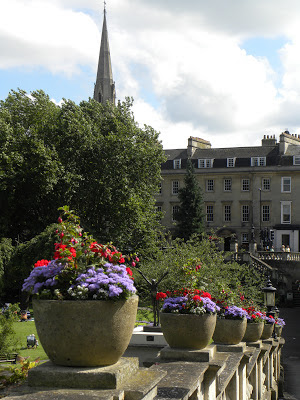 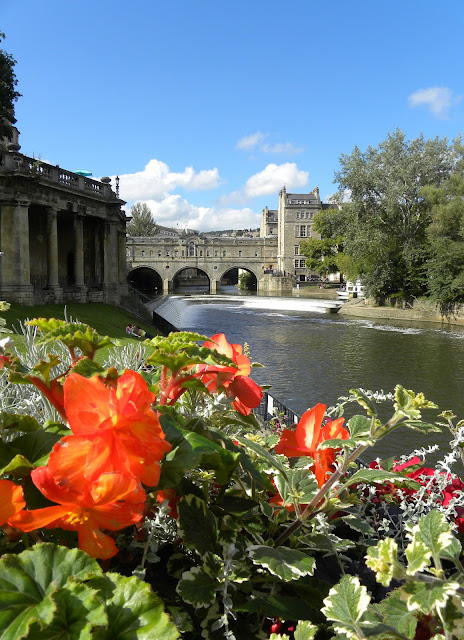 A view of  the Avon River from Parade Gardens.


Back on the bus, we sped past the most beautiful scenery I'd ever seen: emerald green rolling hills laced with stack stone fences corralling thousands of peacefully grazing cows and sheep. I wanted so much to get out and and walk for miles and take pictures of every sweet sheep face in England. However, our driver is intent on getting us to Cheltenham in time for dinner so all I can do is sit back and enjoy the views. We pass several country roads with names like "Birdlip", which gives all a laugh. Our tour group is already beginning to bond; it's going to be a very nice trip.

Dinner at the Cheltenham Park Hotel was excellent--savory tomato basil soup, tender grilled pork served with a large cube of gratin potatoes, a side of assorted veggies finished with a creamy lemon tart to sell your soul for.

Next time: Stratford-upon-Avon and Oxford

Posted by theworldaccordingtobarbara.com at 4:46 PM