You may think that condo living is a modern living arrangement, but in the U.S.  the Pueblo Indians had it down to a science as far back as 600 A.D. Accessibility may have been a problem for some, but as far as use of space, design and functionality, the Pueblos were master builders. Designated a World Cultural Heritage Site by UNESCO in 1978, these architectural marvels tucked into sky-scraping cliffs are everything I thought they would be—jaw dropping! 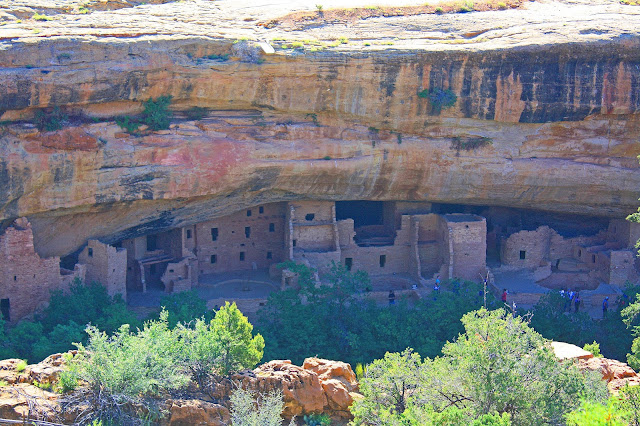 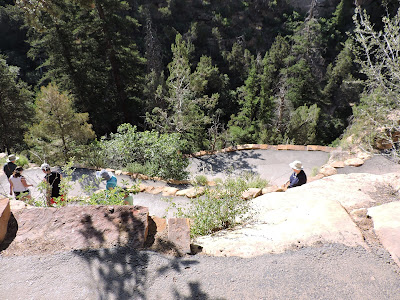 On day  16 of our Western National Parks tour, we stopped at Mesa Verde in southeastern Colorado to tour one of the many cliff dwellings in the area called the Spruce Tree House. We had to climb down then up a steep trail to reach it, passing a crystal stream providing a fresh flow of water. As we entered the village it felt as if we had walked back in time. Except for a few minor repairs, it could easily be humming with bustling activity and lively chatter. Under the watchful gaze of a Park Ranger, we still had freedom to explore all the nooks and crannies of the buildings and one of the pits called kivas. 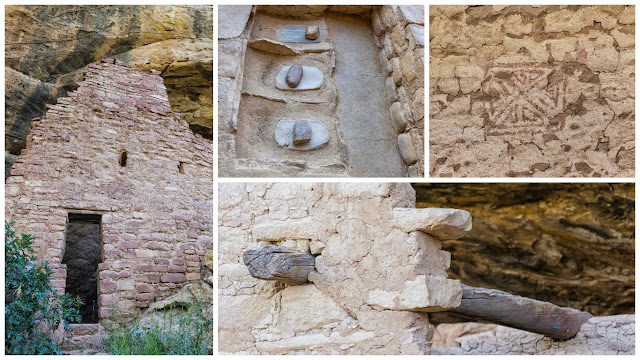 Good examples of the construction techniques. You can see that they
included the "latest in modern built in appliances". 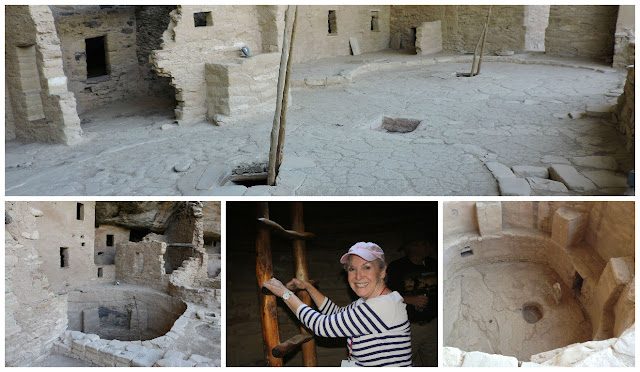 These ancient pits or kivas, are modeled after the Pueblo's earlier dwellings called
"pit houses". It is interesting that this ancient form of dwelling was incorporated into the later high rise stone complexes. (See "Pit Houses" below) 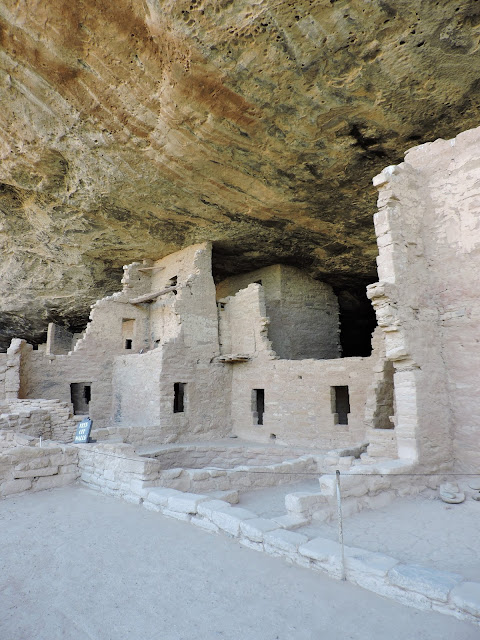 Spruce Tree House
The Pueblo used the tops of the mesas over the dwellings to farm.

How It All Began, Pit Houses

The Pueblo people settled in the area (later to be named Mesa Verde, Spanish for “green table”) around 550 AD. It must have been a lush place with rich farm land and game because it eventually grew into a community of thousands by 1150 AD. Their first dwellings are called “pit houses”. Dug half way into the ground, they are roundish in shape and contained a fire pit/oven and ingenious ventilation. The roof, shaped like the bottom part of a pyramid, was constructed of intertwined poles and twigs and covered with a layer of adobe.

By 750 AD, the Pueblos began to build above ground using tent poles and mud (adobe) until around 1000 AD, when they advanced to building with carved stone allowing the dwellings to rise as much as three stories. Interestingly, they retained the ancient use of pits or kivas in their cliff dwellings, probably for ceremonial and storage use. 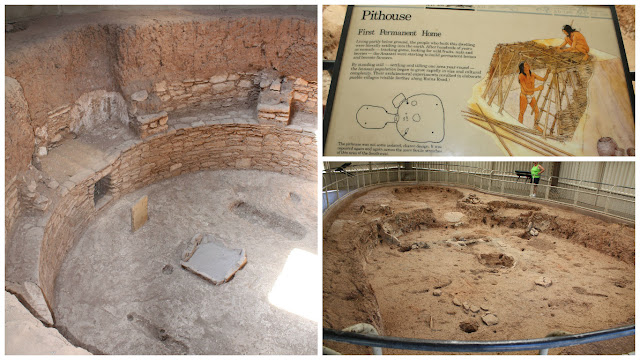 The original dwellings in the area are called "pit houses" because they
were partially dug into the earth and covered with adobe roofs.

It surprised me to learn how many cliff dwellings there are, over 600 in all. We drove by dozens on our way in and out of Mesa Verde, all varying in size and complexity. The biggest and most spectacular one is called Cliff Palace (seen at the top of the page). Unfortunately, we could only view at it from a distance, but I could see people lined up to go down with a park ranger. It looked like just getting down to it from the mesa would be an experience in itself! 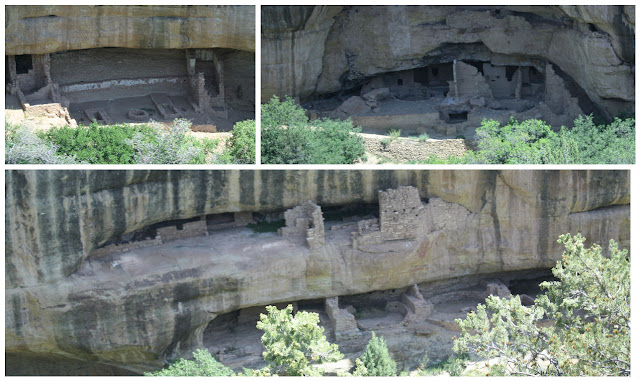 Just a few of over 600 Pueblo cave dwellings in Mesa Verde. The one on the bottom
is a double decker!

Durango to Silverton on a Genuine Choo Choo Train! 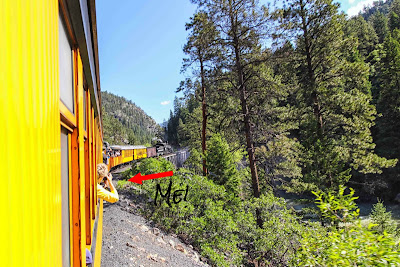 Talk about fun! I definitely regressed to my 10 year old self on the ride from Durango to Silverton in a fully restored coal-fired Narrow Gauge train. Sitting very intimately together on the cramped seats, I couldn’t help but think about the proper Victorian ladies in their voluminous crinolines mashed together with cowboys and miners for the almost three hour trip. However, I quickly forgot all propriety and went the distance with my head out of the window or hanging over the side of the open air car getting a face full of coal dust. And best of all, the entire rail line followed the raging Animas River. Thank heavens we got to see it before the government washed the polluted waters from abandoned gold mines into the river turning it a hideous orange. 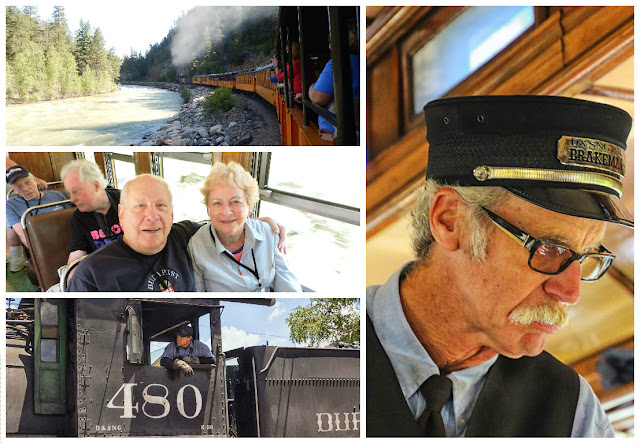 Aboard a coal fired narrow gauge railroad along the Animas River in Colorado.
You can see how Elaine and her husband Robert had to snuggle up in order to fit in
the tiny seats. However, it looks like they rather enjoyed it!
A narrow gauge rail track can be  up to 20 inches narrower than today's tracks. 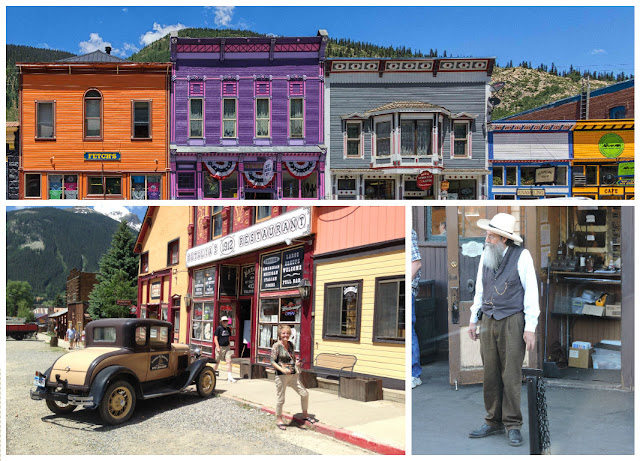 We boarded the train in Durango (top) for the 3 hour trip to Silverton (lower left). Our fellow traveler, Gerta, is shown just leaving the general store, or did she just park her Model T? (Just kidding! Silverton just happened to have an antique car show while we were there.)
(Lower right) I had to take a picture of this wonderful gentlemen at the train
station in Durango. I swear he looks exactly like my great-grampa Franklin who
lived until he was 96. He provided for his family of 12 as a frontier black smith.

It was sad when our trip finally came to an end after 18 fantastic days on the road through some of America’s best scenery. I had one of the best times ever. At least nine of us were single travelers and we all bonded into a very fun loving group. Traveling solo has never been a detriment to me, in fact it has proven to me how resilient and resourceful I can be. It has opened my world to places I would never have seen if I’d waited for someone to go with me. I’ve been forced to reach out and connect with total strangers who, by the end of my trips, have become friends—some lifelong. I can’t encourage you enough to do the same if you are single. 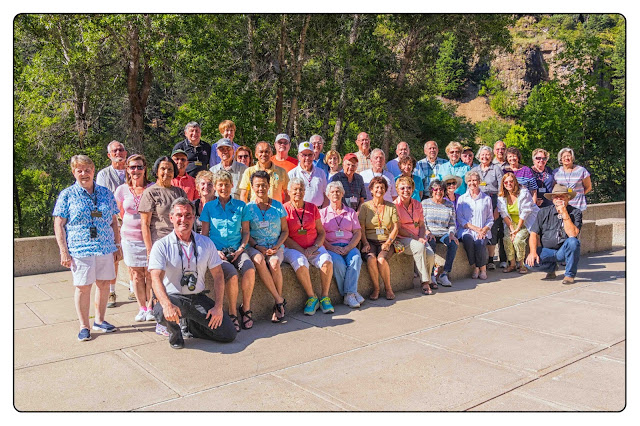 It's not goodbye, Friends! It's "See you later!"

Just say NO to single supplements!

It has been the policy of some companies to charge a single person more, up to $1,000 in some cases, to have a private room and in some cases, to travel alone period. I call it the single tax or penalty. The company we traveled with, Grand Circle Tours, does not charge for a single person to have a room to themselves. Recently, more travel companies that do charge a single supplement fee for a private room have begun to realize they are missing out on a huge market of travelers by penalizing single people with these prohibitive fees. After all, it is estimated that almost half the country is single, or will be before long! I will choose a company that does not charge extra whenever possible. If it isn’t, I call the company to see if I can negotiate a reduction in the fees. So, do your homework and find those companies who are single friendly!

Thanks so much for coming with me on this wonderful tour of the nations great Western National Parks. And, stay tuned! There are many more adventures to come!

Please become a follower! I would really appreciate it.

Next time, we’ll return to England and the great estates of Warwick Castle and Blenheim, ancestral home of Winston Churchill.

(Thanks a million to Eric Solberg and Larry Miner for the use of some of their pictures. Thanks, guys!)

Posted by theworldaccordingtobarbara.com at 11:25 AM No comments: