John Wesley Powell, the One Armed Indiana Jones of the West 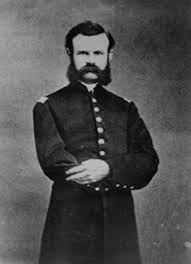 We owe a great debt to the intrepid explorers who’ve risked their lives exploring the vast terrain of our country. Many of the natural wonders they found have become our treasured National Parks. Extreme risk takers, they are tough, fearless and possess an insatiable thirst for knowledge and adventure: like John Wesley Powell.

In 1869, Powell, a small, unassuming geology professor, arranged an exploratory expedition down the dangerous Colorado River. Even the loss of an arm in the Civil War didn’t stop Major Powell from taking on the mighty Colorado despite the fact that its raging rapids were known deathtraps. Up to this time, no “white man” had ever finished the trip alive. With ten men and four rowboats, he headed out from Green River City in Wyoming and ended in the Grand Canyon three months later. Battered and barely alive, only six men and two of the boats survived. However, they had succeeded in discovering breathtaking canyons and vistas of unsurpassed beauty.

Powell later wrote in his diary that the Utah canyons have "...wonderful features--carved walls, royal arches, glens, alcove gulches, mounds and monuments. From which of these features shall we select a name? We decide to call it Glen Canyon." 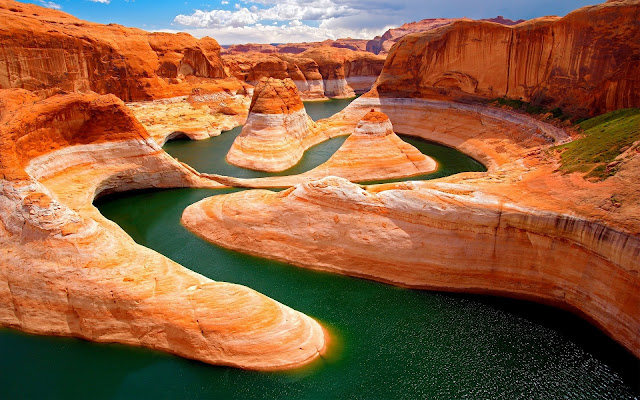 Some of the amazing twists and turns of Glen Canyon. The white "bath tub ring" is made
by receding water levels in the lake. (picture courtesy of Google Images) 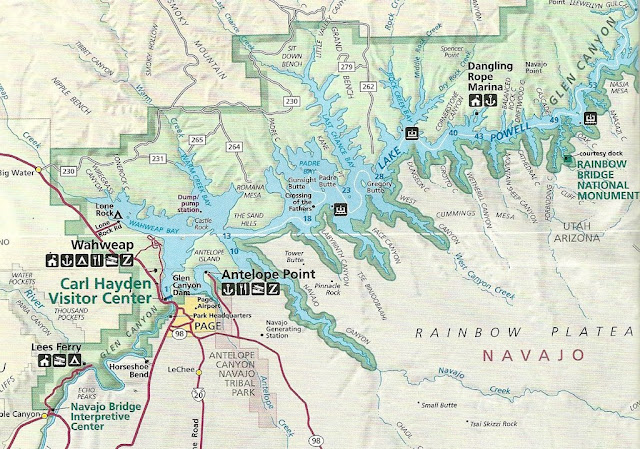 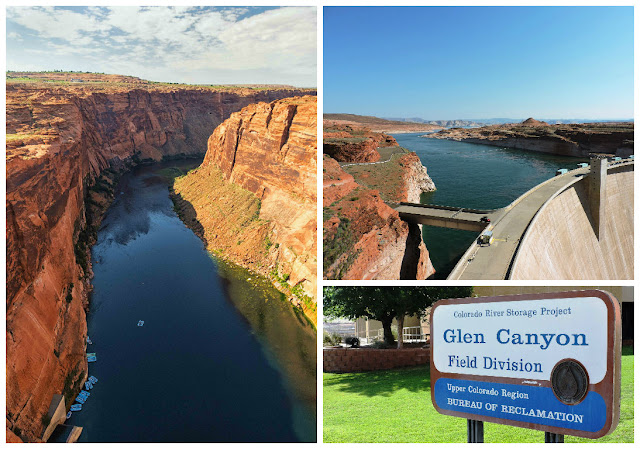 Described by Powell as the most intimately beautiful of all the canyons, much of Glen Canyon now lies under water. Finished in 1966, the Glen Canyon dam on the Colorado River created Lake Powell and 1,900 miles of shoreline. Providing not only a valuable water source for several states, but a recreational area as well, the 187 mile long lake has almost 100 side canyons to explore. Managed by the National Park Service, it was established as a National Recreation area in 1972.

Boating on the Powell

Instead of riding horses or mules through the canyons, we can now marvel at them from the comfort of a boat. After first visiting the Carl Hayden Visitor Center and taking pictures of the dam and Navajo Bridge, our tour group gathered at the dock at nearby Lake Powell Resort. Slathered in sunscreen, we clamored aboard a luxury sized yacht for an unforgettable cruise on Lake Powell. 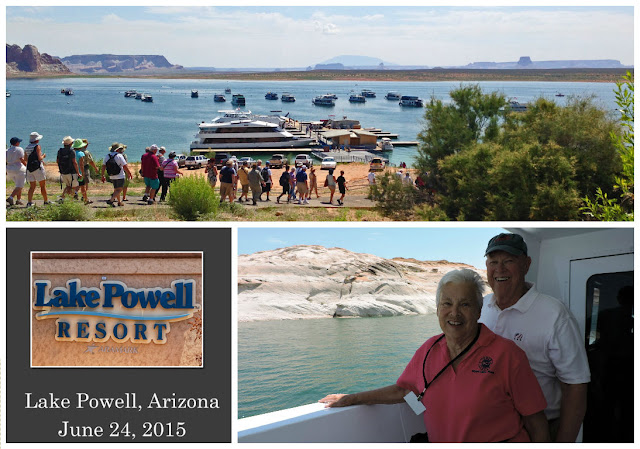 Pictured on the right are happy travelers, Walt and Barbara. Can you tell they
are having a good time? Look at the vistas in the background! 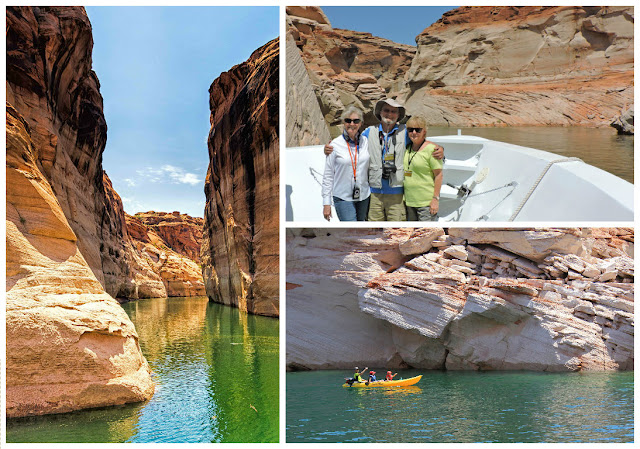 Every twist and turn and bend in the canyon evoked a chorus of "ooo's and ahhhh's!" Upper right, are some of our group traveling solo, buddies Eric, Dianne and me!


Video of our cruise on Lake Powell.


What is Navajo sandstone?

Much of the natural wonders we’ve seen over the last few days have been made of Navajo sandstone. Named in honor of the Navajo Nation it is, simply put, ancient windblown sand dunes solidified into rock. Formed while the giant dinosaurs roamed the earth in the early Jurassic period it is everywhere. Ranging over large parts of Nevada, Arizona, Colorado and Utah, it covers three times the size of the Sahara Desert! In fact, it is the basic structure of the entire Colorado Plateau.

After the cruise, we returned to Page, Arizona and our hotel. Our day far from over also included a trek to one of the best sites on the trip. After a quick lunch, we boarded safari like vans and with our Navajo guides, headed toward the jewel of all natural sandstone sculptures, Antelope Slot Canyon. 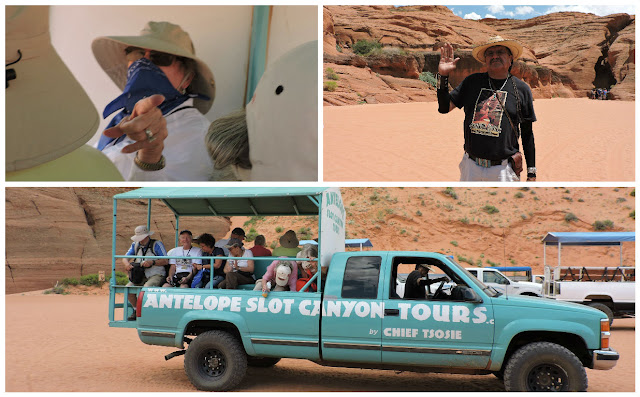 Elaine threatens to shoot me with her finger for getting the front seat (upper left)
and our guide, Slow Horse, (upper right) stands in front of the entrance to Slot Canyon.
You can see  how narrow and tall it is.
(It's my understanding that Antelope Slot Canyon being on Navajo land, can only
be seen by special permission of the Navajo Nation. They allow only small groups
at a time. For more information: Antelope Canyon Tours ) 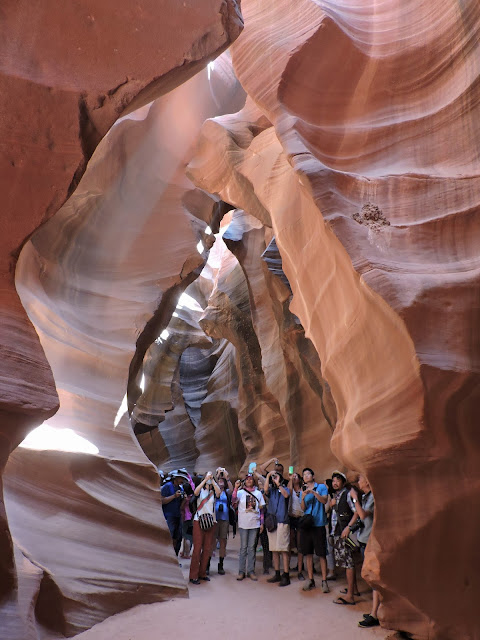 With a day of over 100 scorching degrees, the instant coolness of the canyon was a relief. As my eyes adjusted to the dim light, I could see why they named it Slot canyon. The opening is so narrow it only allows a few people at a time to gather, and the deeper we went, the narrower it became until only one person at a time could pass.  The passages may have been narrow, but the sides of the canyon soared impossibly high above us allowing only slivers of light to illuminate our way. 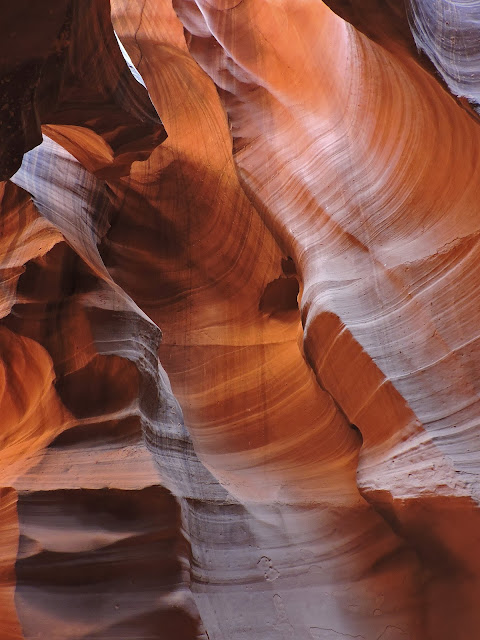 I’ve seen pictures of the canyon everywhere, but to see it in person took my breath away. The towering walls made of multicolored sandstone, sculpted by the whorls and eddies of water erosion are smoothed and polished until they are gem-like. The changing light transforms each plane into a living art piece and that same light streaming down from a great height gives one the feeling of being in a cathedral. It is no wonder it is a scared place to the Navajo. 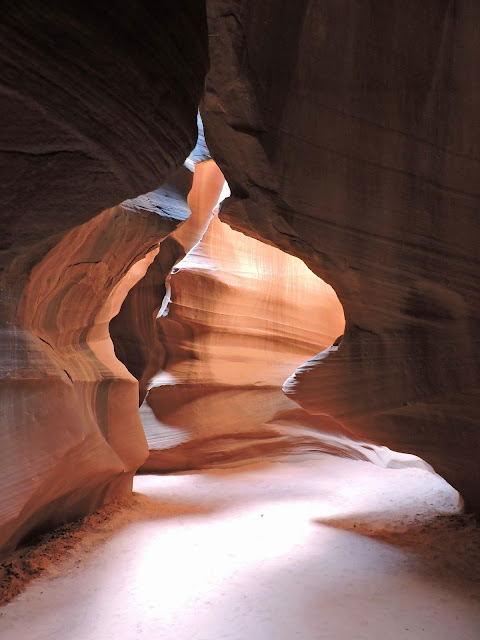 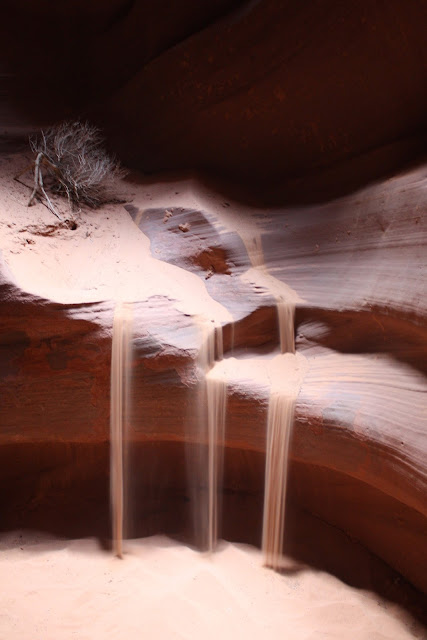 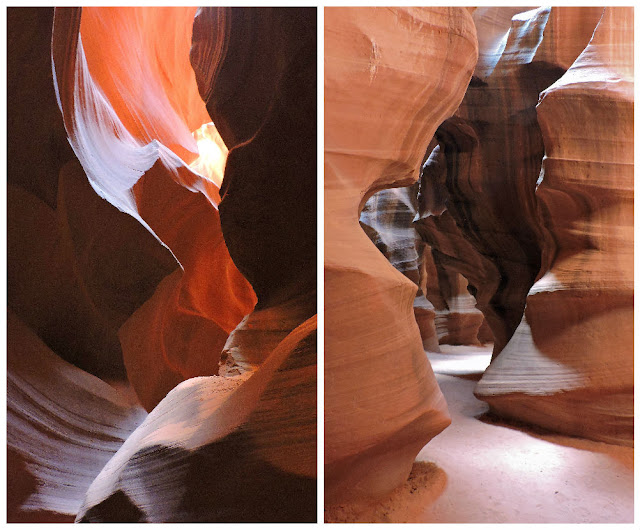 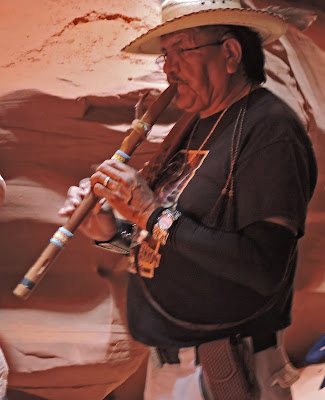 On the way back over the hot and dusty unpaved roads, I got to ride in the air conditioned cabin on padded seats. I only felt a little sorry for my tour buddies in the back, bouncing along in the oven heat and choking dust. But, for me, I had the good fortune of spending time with Leonard, our guide. I asked him what his Navajo name is and he answered, "Slow Horse". I should have asked him why his parents named him that, but I didn't. My guess it's because he was laid back,  and good-natured. Still is!

He had been the perfect guide, changing the settings on our cameras so we could take decent pictures and playing his flute deep in the canyon. And great for us, we would see more of him that evening. 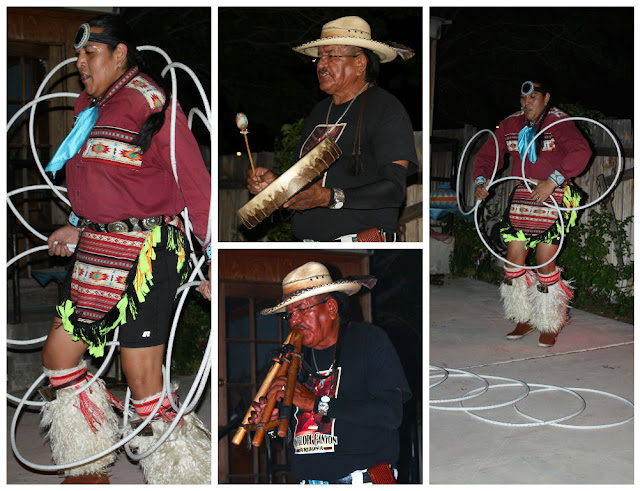 We had a wonderful dinner and entertainment waiting for us after we cleaned up. It featured Leonard (aka Slow Horse) giving a talk and playing another one of his flutes for us. He also played the drums while a very talented hoop dancer picked up one by one dozens of hoops that he formed into several shapes. He didn't even drop one!

(Some pictures provided by Larry Miner and Eric Solberg. Thanks, guys!)
Posted by theworldaccordingtobarbara.com at 5:17 PM 4 comments: