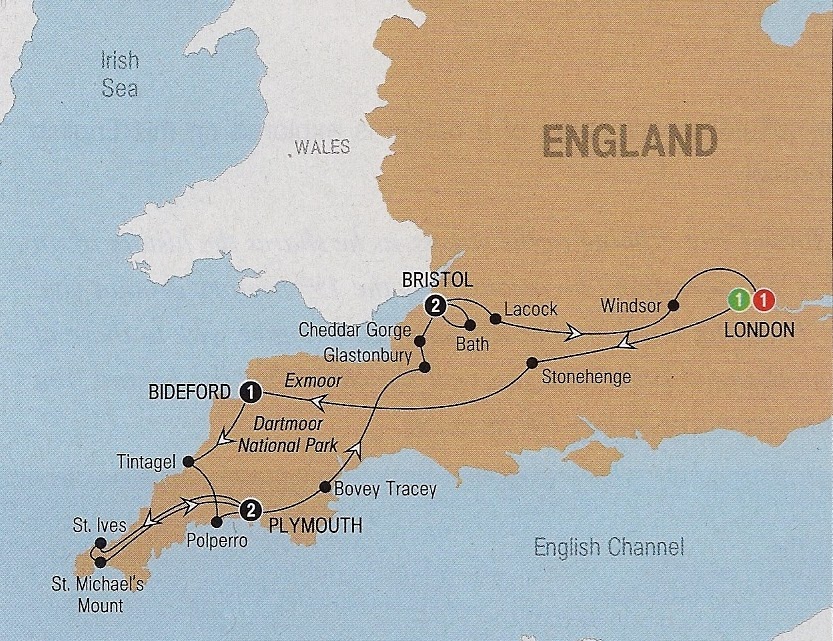 Earlier in the day, we said goodbye to Plymouth and headed north across Devon into Somerset, finally ending our day in Bristol. It was a long day of driving, but we broke it up with two side trips along the way; one to Glastonbury and its enormous Abbey ruins, and Wells, a tiny town with one of the best cathedrals in England. 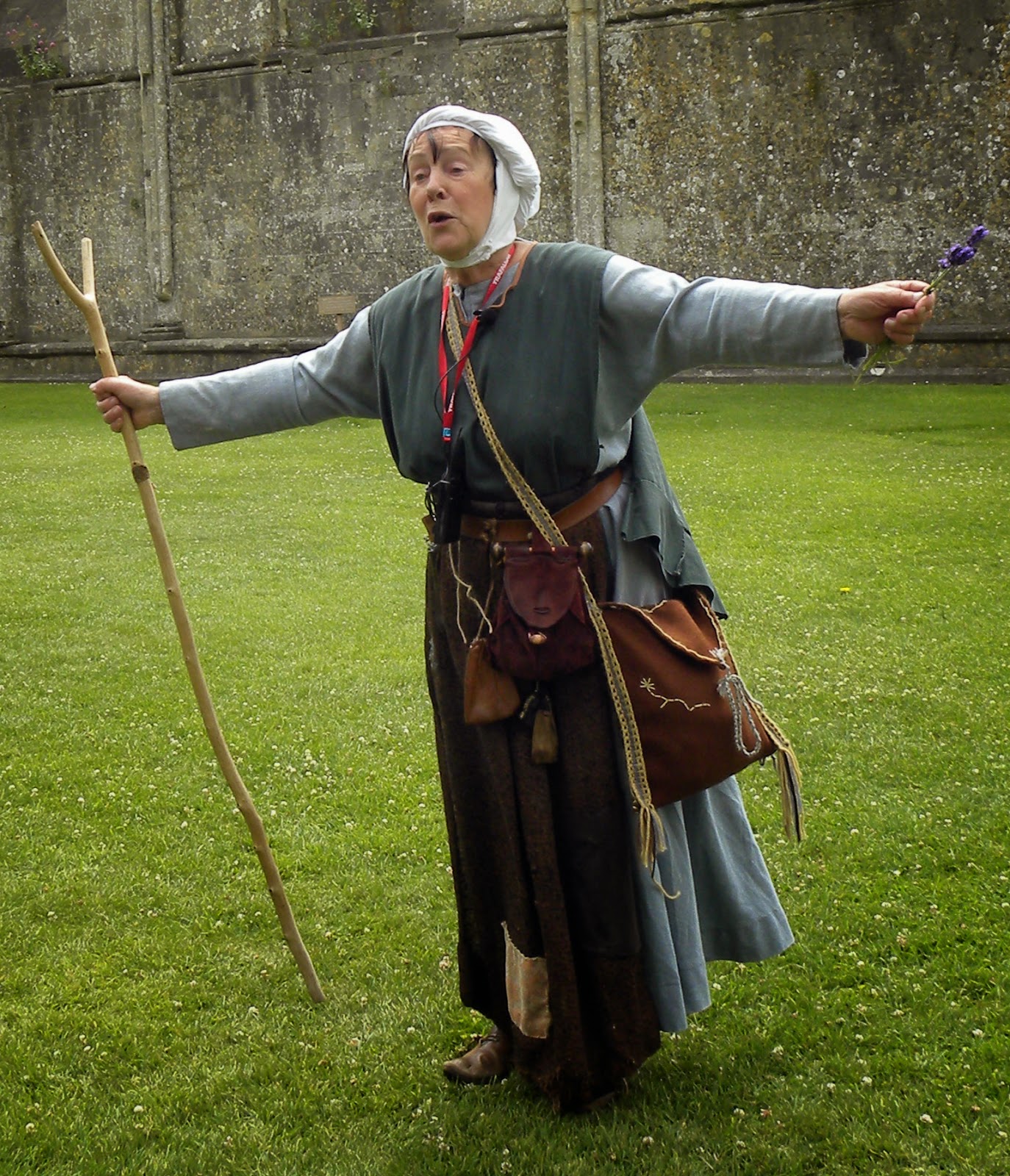 “Welcome, Pilgrims, to Glastonbury Abbey! My name is Alice Cleaves. I was a serving wench here of late, but now I’m out of a job, thanks to Henry VIII, and I’m not very happy about it.” We arrived at Glastonbury Abbey just in time to join the delightful “Alice” (a living history presenter) for a tour.

Alice, with staff in hand, proceeded to show us the Abbey as it once existed in 1538, the last year before Henry VIII had it destroyed (but not before parceling out its riches to his supporters). Soaring arches and parts of walls are all that is left of one of the largest churches in all of England. At one time, it was the richest and most influential of them all, outranking even Westminster Abbey. Encrusted with gold and paved with expensive handmade tiles, it was the burial place of four kings, including King Arthur and his Guinevere. (Glastonbury Abbey) 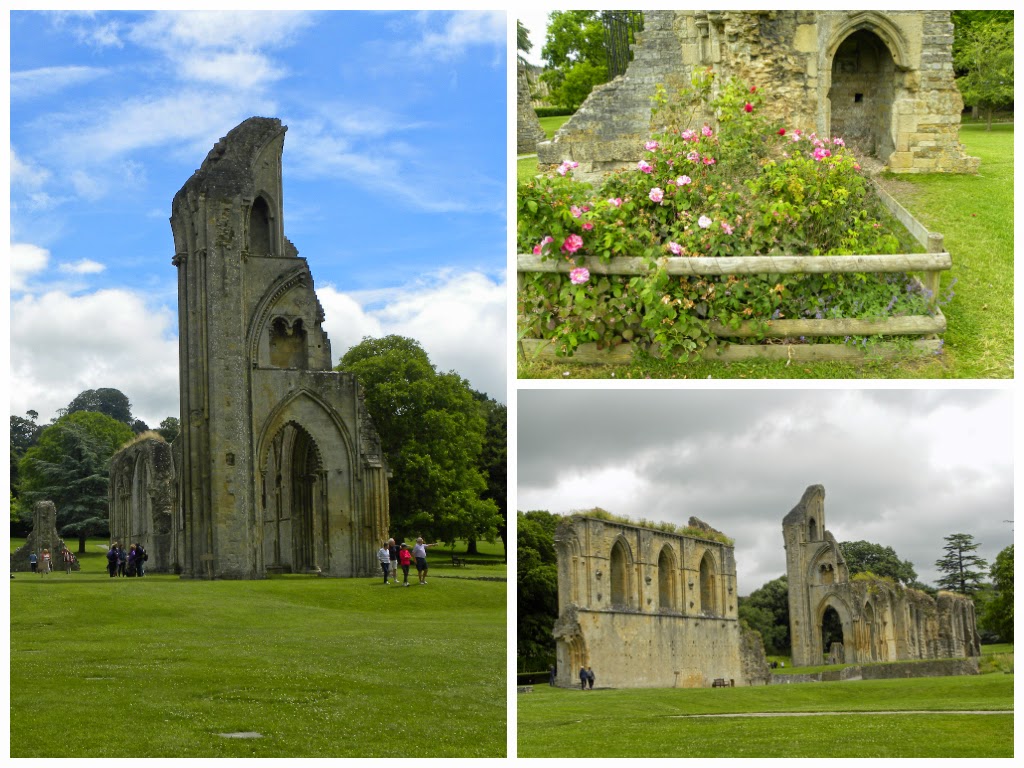 After showing us the general layout of the Abbey’s massive footprint, Alice pointed to an imaginary sign and firmly announced,

“Don’t think you can come ‘ere without any money, all right? I hope you all brought a few groats. Don’t matter how poor ya are, but you may have to pay for a few things. You Pilgrims come for many reasons. Many of you have come here to be forgiven, yes? ‘Ere by the door is the Magna Tabula, for those of you who can read. It’s written in Greek and tells how many years and days you can pay to knock off your time in Purgatory. In truth, we can offer ya 64 years and 169 days. Take it or leave it!”

How to become a Monk 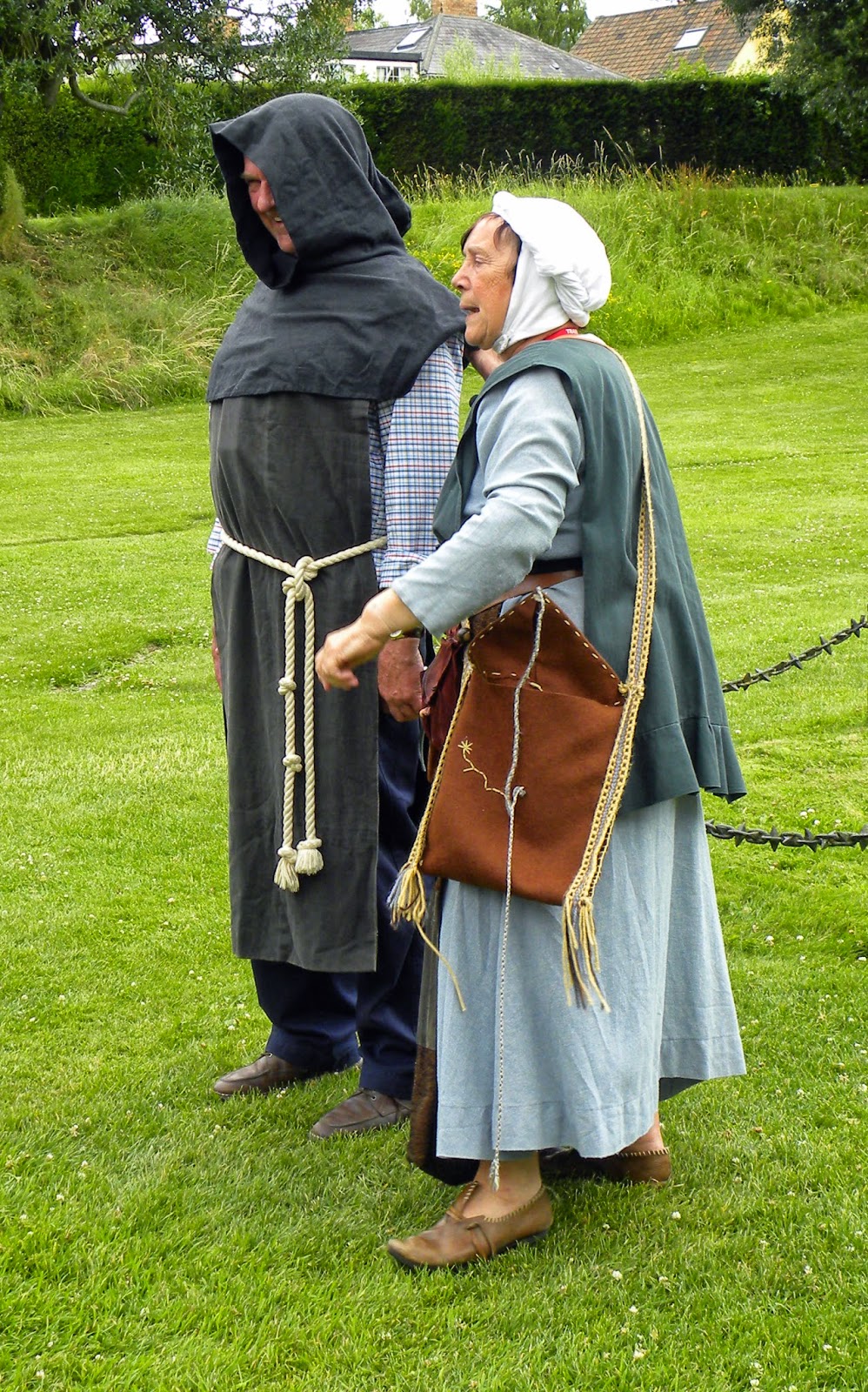 “Now some of you have come for another reason.” Grabbing the arm of one of the men in our group, she continued, “Mister Richard ‘ere, has come to be a Brother, haven’t ya? He was sent by his family—at that time it was a wonderful career. It will take Mister Richard three years to become a Brother, and if he’s noticed by the Bishop, he could be sent to Cambridge or Oxford, if he’s bright. Can you read, Mister Richard? All right, then. You just might make it!” She said, as she handed him his monk’s attire to put on.

Slipping the cowl over his head, Alice proclaims, “Brother Richard, you’re now a full-fledged monk! So, come over ‘ere, I’ve got a little job for ya. Most of these Pilgrims have come to see the shrines and tombs, but you will notice that there are large boxes covering them up. Your job, Brother Richard is to pull up the boxes, by rope and pulley, to reveal them—for a donation, of course. All right! Pull the rope, Brother Richard! No, no! Not the rope on your robe, the rope to the box! Oh, he’ll never get to Cambridge that way!” 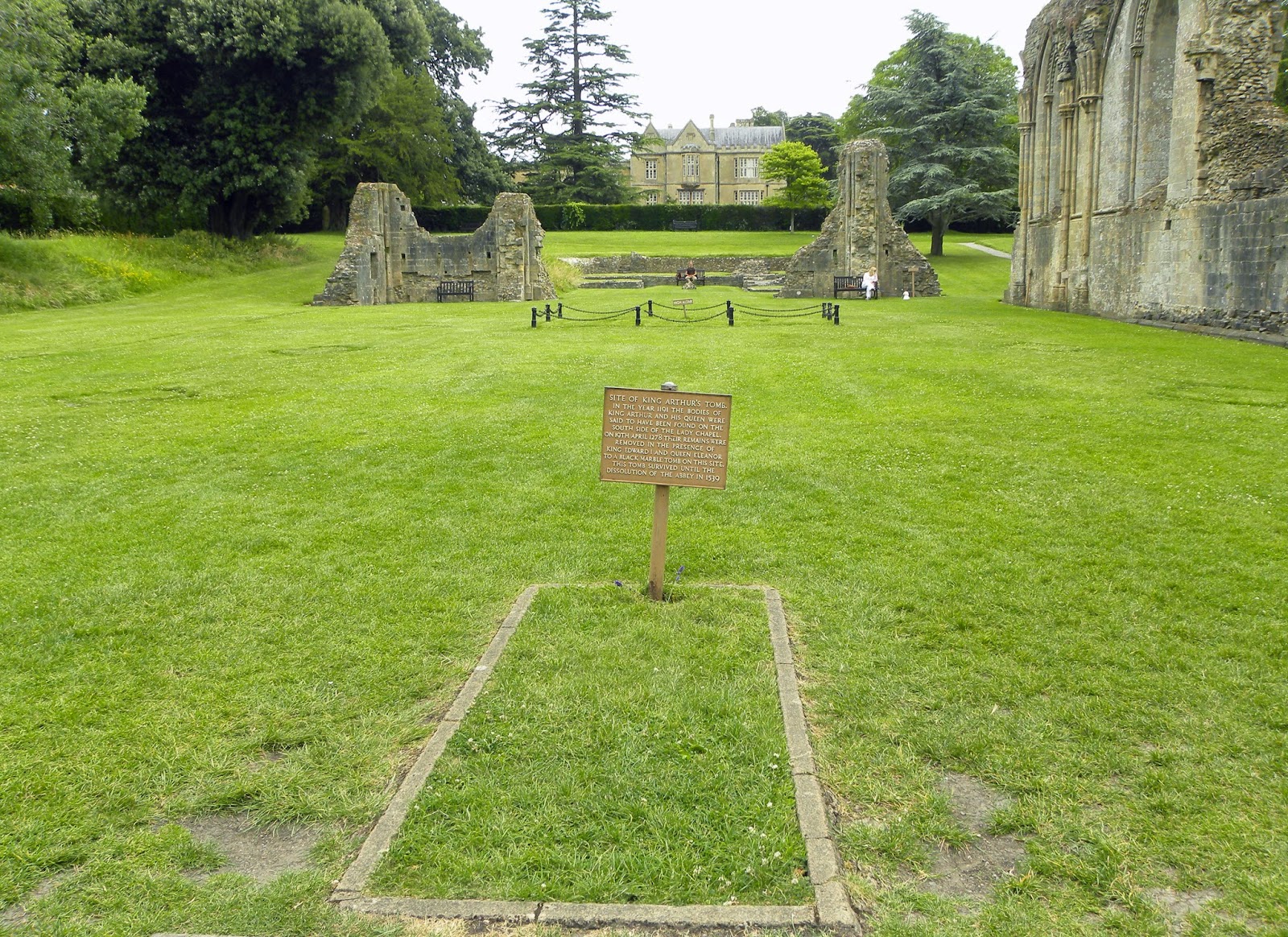 After getting the measure of Brother Richard, Alice takes us over to a grave-site in front of what would have been the high altar. Pointing at the grave, she explained,

“It is said that Arthur of the Britons located his Camelot close around Glastonbury, and when mortally wounded in battle in 537, he was brought ‘ere to be buried in the Abbey cemetery. In 1191, King Henry II asked the Bishop to locate his bones for reburial in the cathedral. The monks eventually found a large hollowed out tree trunk with the remains of a very large man and a woman with golden hair. They moved them ‘ere in the South Transept where they remained until the Abbey was destroyed in 1539. Since then, what happened to the remains of King Arthur is a mystery. Someone dug him up, but where they put him, no one knows…”

Alice concluded her narration with us by saying, “I hope you’ve enjoyed the tour. Feel free to wander the grounds. All except you, Brother Richard. You have to stay here!”

The only building left intact on the Abbey grounds was the kitchen, probably because Henry's men had to eat somewhere while they were busy destroying the Abbey. In its prime, the kitchen could provide meals for 500 people at one time, having four huge fireplaces in all of its corners. 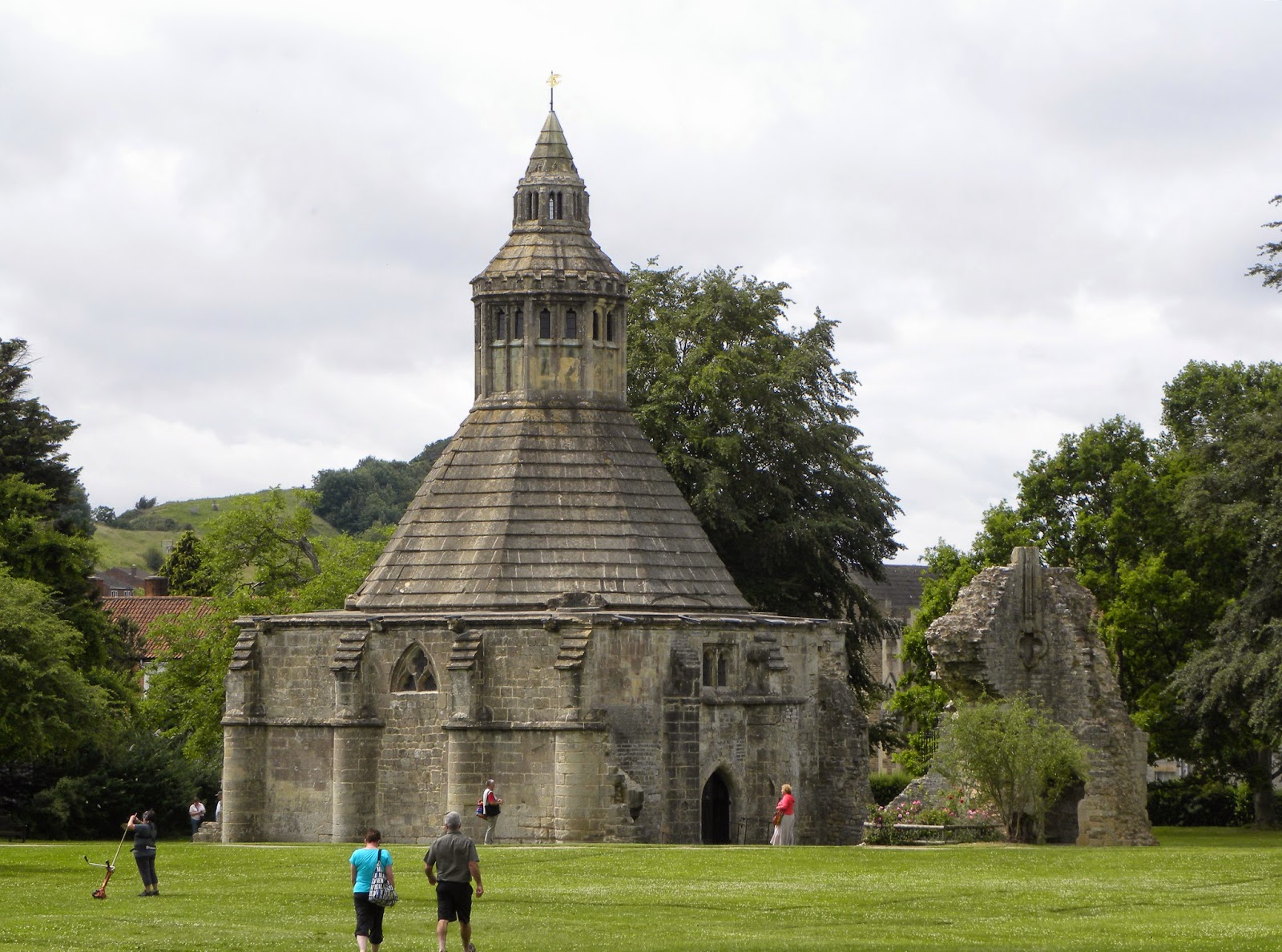 The Abbot's kitchen. The only building left intact. 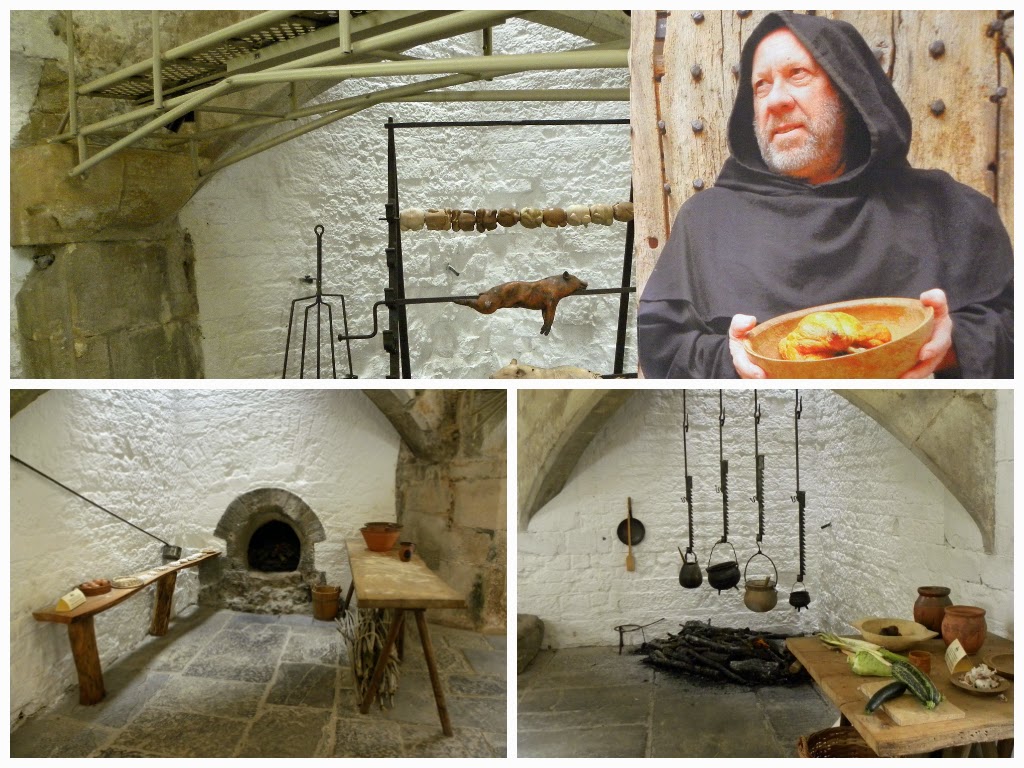 Only men were allowed to cook in the great kitchen. 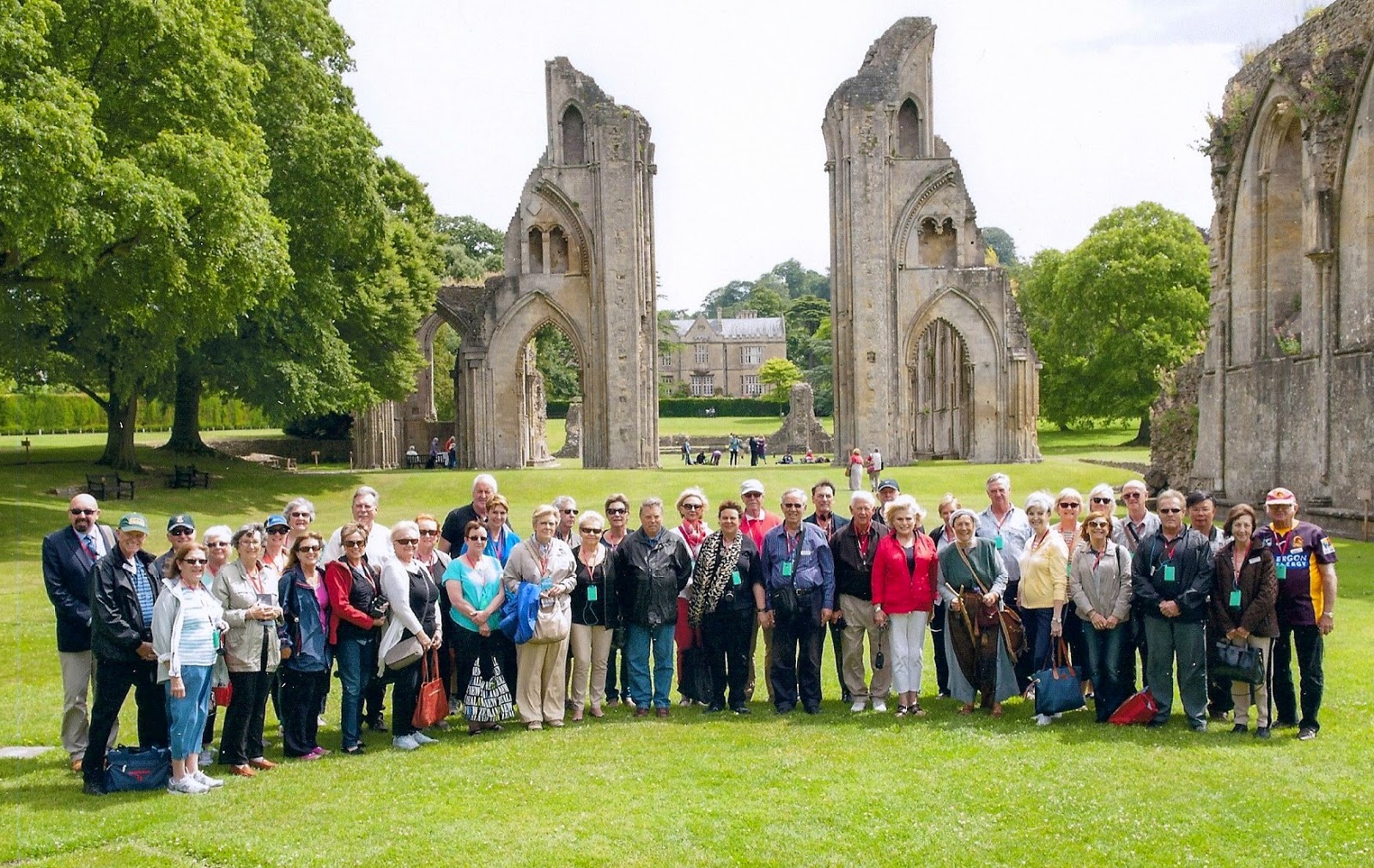 Our tour group at Glastonbury Abbey. Steve (our guide) is on the extreme
left hand side, Alice and I (I'm the one in the yellow), are on the right-ish
side in front. Brother Richard is the tall one between us.

Not far from Glastonbury, is the city of Wells. It’s a tiny place, one of the smallest cities in England, but it contains the most breathtaking cathedral I’ve ever seen. Steven (our guide) promised that we would see some hidden gems on our tour, but I was unprepared for the stunning beauty of Wells Cathedral. 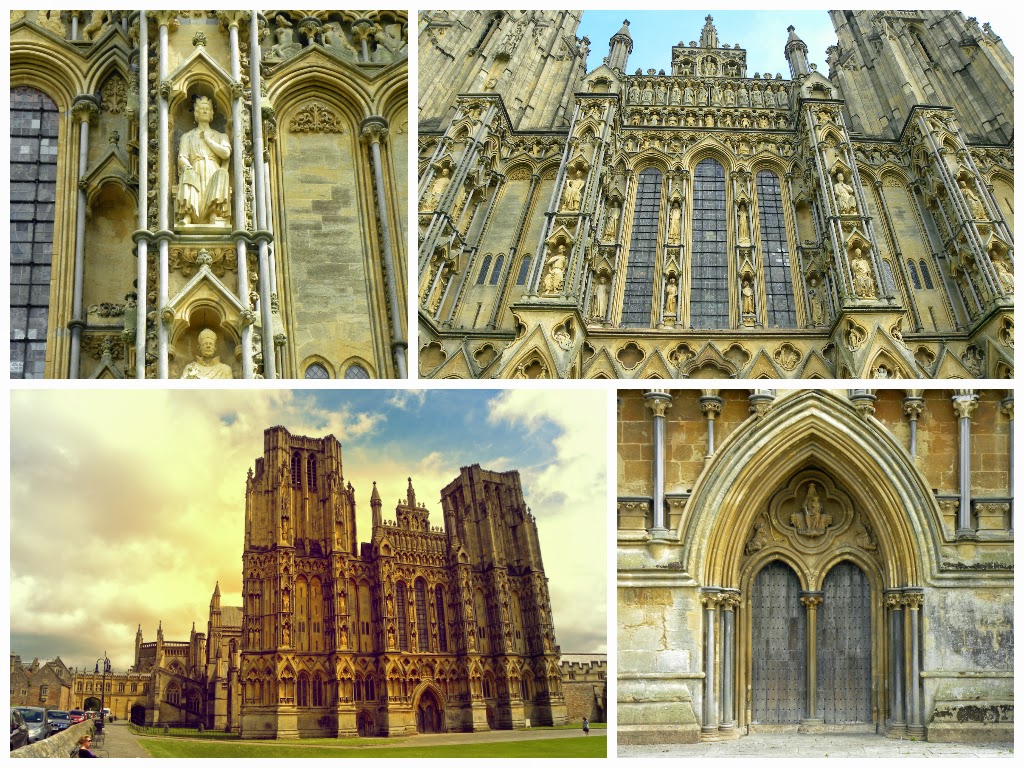 Wells Cathedral is a classic Gothic church, built before spires were standard equipment.
Without them, it almost looks like something is missing.

It’s a crime that we were only given 15 minutes to see this extraordinary jewel. As soon as the bus stopped, I jumped out with just my camera and took off running. I took a few pictures of the façade then went inside to snap a few pictures just to say I’d been there, but what I saw took my breath away. Bathed in brilliant natural light, every surface looked illuminated from within. Carved entirely out of the local honey-colored limestone, its interior is clean-lined and inviting, and to me, almost modern.

Besides the light, what immediately demanded my attention were the enormous scissor arches that towered several stories over the altar. Added in 1338 to add support for a tower addition, they are the main focus of the cathedral. Modern in design and aesthetics, and a product of ingenious engineering, they are marvelous. 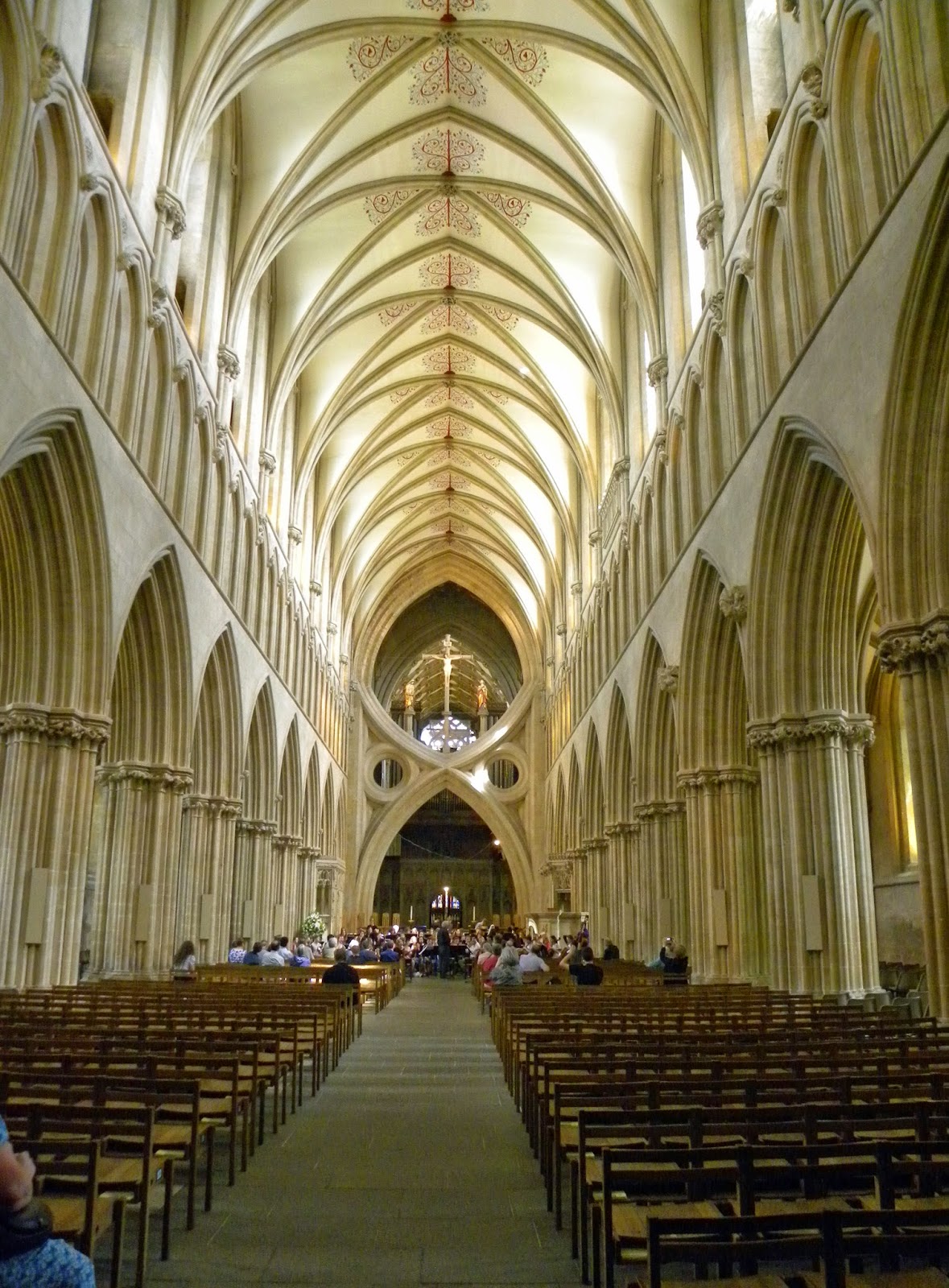 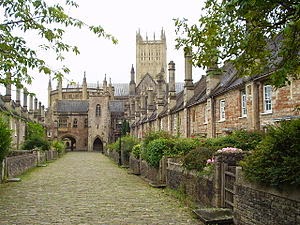 Because of the time constraints, I missed seeing many other unique and beautiful things about Wells Cathedral, like the Vicars’ Close, one of the oldest and best preserved streets in England. I hope if you are ever in the area, you won’t miss it. It’s one of England’s finest gems. (Photos and History of Wells Cathedral) 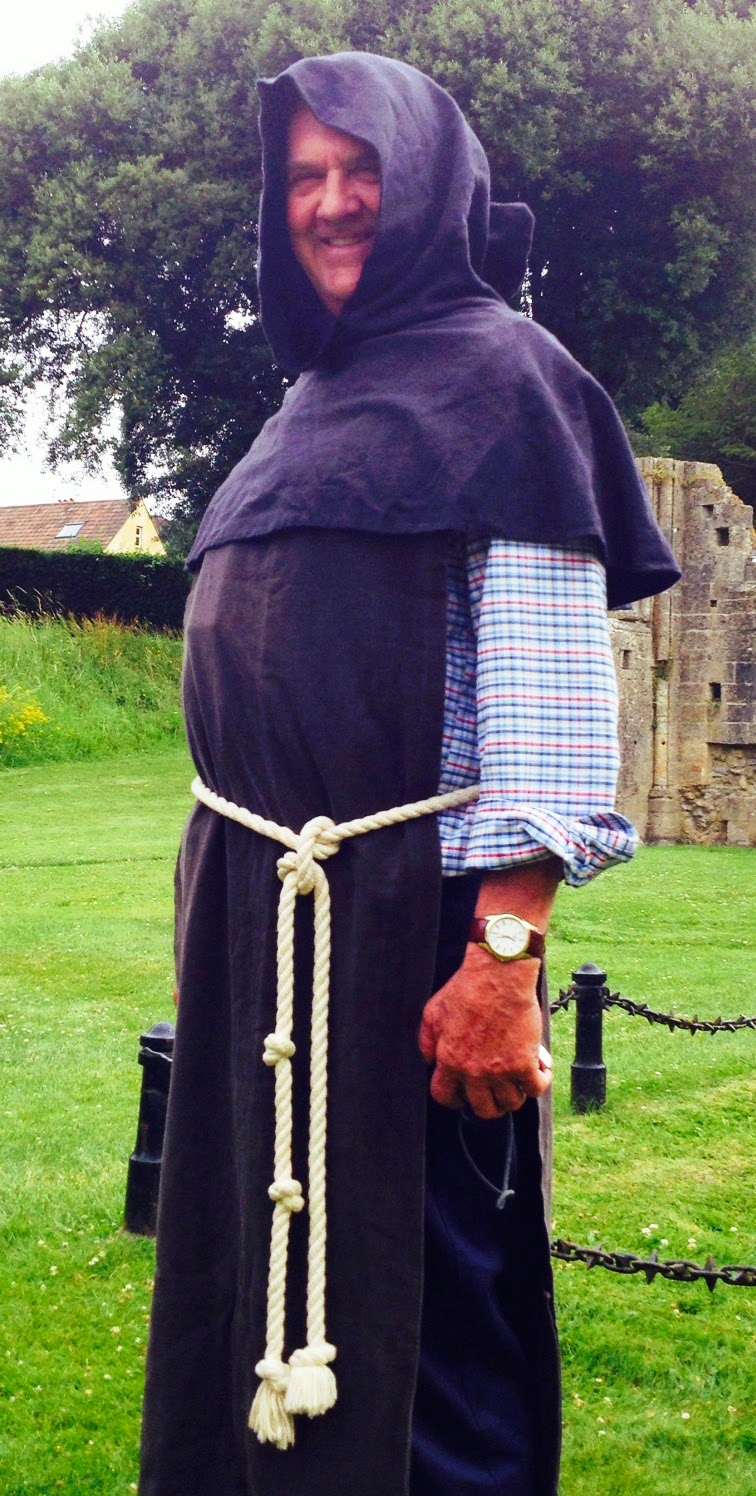 **To see a complete performance by "Alice", click this link: Alice and Glastonbury Abbey
**A big thank you to Ross B. for this picture of Brother Richard (actually Richard T. from Australia). Thanks for the laughs, Richard! You were a great sport!

Next Time: Bath
Posted by theworldaccordingtobarbara.com at 8:03 PM