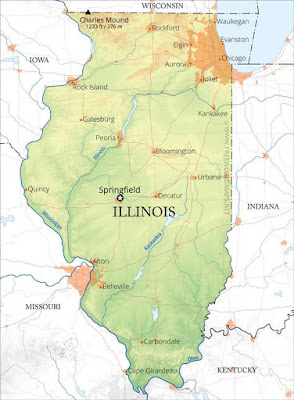 As Timothy, Thomas and I cross the 200 plus miles from the Lincoln’s farm in Indiana to Springfield, Illinois, I wonder how Abe Lincoln managed to settle in an area so far from home. A bit of investigation gave me the answer: it was chance. Pure chance. For 14 years Abe worked side by side with his father, Thomas, on their farm in Indiana until one day they received a letter. A relative had settled in Illinois and described the vast prairie lands as if they were another Garden of Eden and encouraged the Lincolns to move. And just like that, Thomas loaded his family and belongings into an ox cart and left the rich forested land of Indiana for the prairies of Illinois. It would be a move that would change the fate of Abe Lincoln and the nation forever. 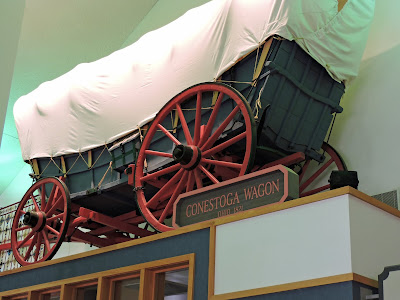 Abe would soon turn 21 and could have struck out on his own long before this as most men did; however he chose to help his family make the arduous 225 mile trek over the rutted and sometimes nonexistent trails. They settled near the town of Decatur on the north bank of the Sangamon River, a river that would play a major role in Lincoln’s destiny. After helping his father build a cabin and with the family settled, he went back to piloting flat boats this time on the Sangamon, Illinois and Mississippi rivers, making more money than he’d ever seen. And, on one fateful day on the Sangamon River, his life would be forever changed. (The Conestoga wagon transported thousands of settlers across the western lands.)

A new town and new opportunities

This map shows how the Sangamon River connects the Lincoln's farm (lower red circle) to New Salem (upper red circle) and the Illinois River and beyond. Springfield, the capitol, is a short distance away. 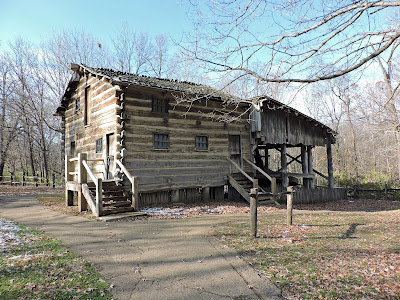 In 1831, as he and his companions piloted his flatboat down the Sangamon River with a load bound for New Orleans, their flatboat got stuck on a mill dam next to the newly settled town of New Salem. He drew a crowd as he skillfully maneuvered his boat over the dam. Impressed by his ingenuity and competence in getting his boat unstuck, the town invited him back with an offer of a job.

(Reproduction of the gristmill.)

Something very profound happened that day. Was it just the welcoming spirit of the town that encouraged him to settle there or did he just happen to catch the admiration in a pretty young lady’s eye as well? A promise of what may be...Whatever it was, Lincoln would make the long trek back from New Orleans, 180 miles of it on foot, to make New Salem his new home. Perhaps he saw that here he could start a new life as a man standing on his own two feet.

The town of New Salem has been carefully reconstructed and is now a heritage site. 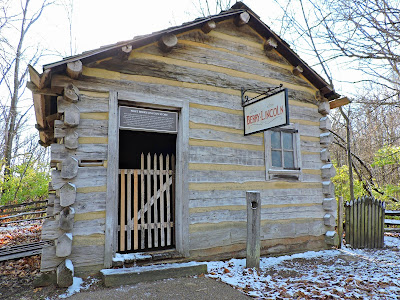 Over the next 6 years living in New Salem, he grew confident in his abilities. He bought an interest in a general store, but instead of sufficiently attending to it, he preferred to socialize with his customers and keep them in stitches with his funny stories. He had partnered with a man by the name of William Berry whose poor management coupled with Lincoln's inexperience eventually forced its closure.

However, the failure of the store cemented his aspiration for a career in politics. He read constantly to improve himself. He learned the proper use of grammar and read and memorized every law book he could get his hands on, all while working a variety of jobs. He became the Postmaster, and worked as a surveyor, finally winning election to serve in the Illinois legislature. His hard work paid off and after six life changing years in New Salem, he moved to the Capitol of Illinois in Springfield to begin serving his first real term in office. 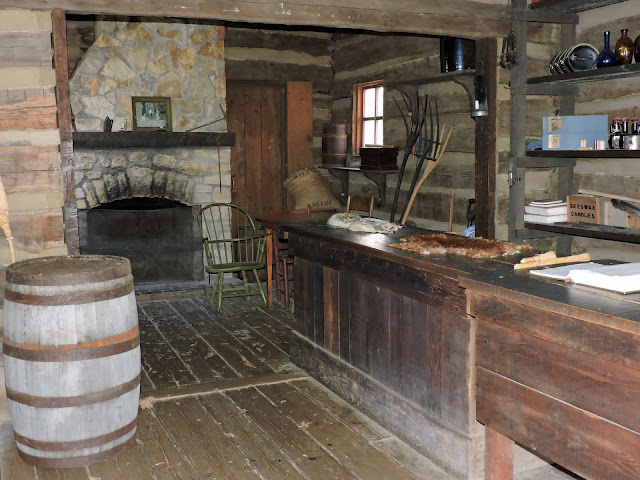 This is how Abe Lincoln's store may have looked like. We can imagine Abe doing
more chatting than selling! 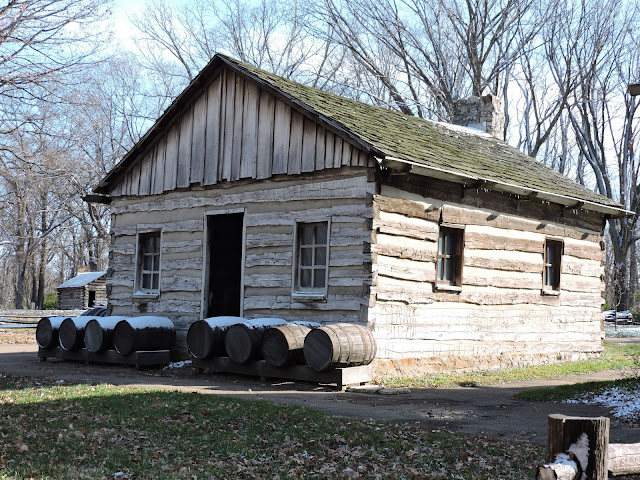 Abe's partner in the store, William Berry, obtained a liquor license by forging Lincoln's name.(Abe didn't drink.) The cost of the whiskey and poor management made the whole investment "wink out" according to Lincoln.

There are many reasons why New Salem was remembered so fondly by Abraham Lincoln. One reason, I believe, is that he fell deeply in love for the first time--with Ann Rutledge. Historians argue to this day whether Abe had a relationship with her or not. Past biographers interviewing some in Ann's family quoted them as saying, “Yes, they were a couple.” and others said they saw no evidence of it. So what is the truth?

Let’s start with the facts: When Abe met Ann, she was engaged to a wealthy New Salem merchant, John McNamar. McNamar left town to attend to business somewhere in the East and as time went on, it became apparent he may never return. He had even stopped writing to Ann. Ann did not want to break off her engagement until she could confront McNamar in person. Abe, as a boarder at the Rutledge home, was also a close family friend. It was during this time I believe he fell desperately in love with Ann and would have married her, but was restrained from overtly courting her because of Ann's continued commitment to the engagement. The most telling observation came from one of Ann's aunts, Mrs. Wm. Rutledge. She thought that Ann’s heart really belonged to McNamar and would have married him if he ever came back. She never had that chance. She died at the age of 22 from typhoid, and Abraham Lincoln spiraled down into a suicidal depression for months.

They may not have had a mutual love relationship, however I think she liked the tall, gangly young man and appreciated his attentions. As for Lincoln's feelings? They are best expressed by the answer he gave to his good friend, Isaac Cogdal, when he asked whether it was true that Lincoln had fallen in love with Ann. Lincoln replied: "It is true--true indeed I did. I loved the woman dearly and soundly. She was a handsome girl--would have made a good, loving wife...I did honestly and truly love the girl and think often, often of her now."

To have lost someone we love is heartbreaking, but to never have had that love returned is devastating. Abe, like so many of us, was a victim of unrequited love.

Like Brigadoon rising out of the mist, New Salem only existed as long as Lincoln lived there. It’s as if once it served its purpose of shaping a young man into a great statesman, it disappeared. The hoped for use of the Sangamon River as a major river passage to the Mississippi didn’t pan out and the town was virtually abandoned by 1840. By that time, Lincoln had relocated to Springfield to become a lawyer and a rising star in politics.

The town has been painstakingly recreated and during the summer months is alive with docents clad in period clothing and fun activities. We arrived in New Salem on a snowy November day, so we had the town all to ourselves. The docents had gone home for the winter and a spare 2 or 3 people manned the visitor’s center. One of which was the curator who was more than happy to answer all our questions. We have William Randolph Hearst to thank for purchasing the land and then conveying it in trust to the Old Salem Chautauqua Association who oversaw the rebuilding and preserving of the town. 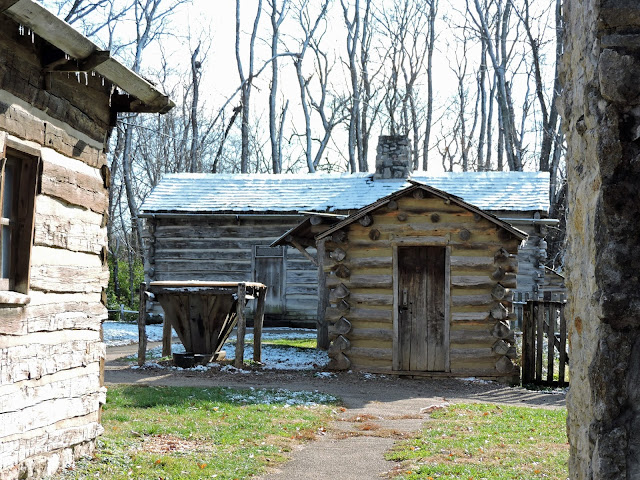 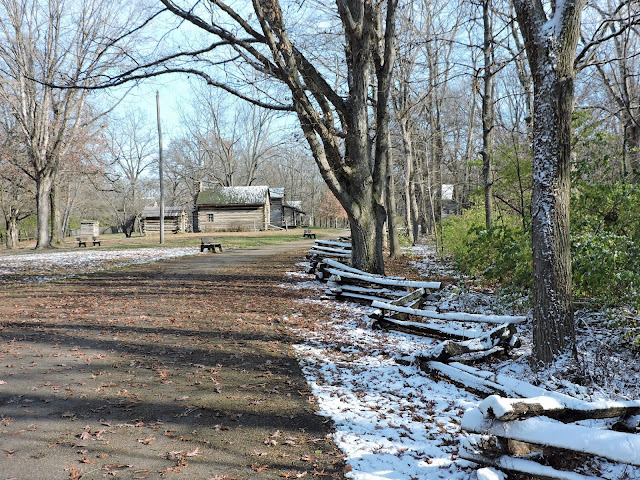 In 1931, 12 log buildings were reconstructed forming the heart of New Salem. Originally there were around 24 buildings including a tavern, general store, gristmill, doctor’s office and various residences.

To see while in the area:

In Illinois, just east of St. Louis, Missouri are remnants of a sophisticated Indian culture. The structures are huge spanning several acres of land. The main mound rises several stories. (See the tiny white car on the left?) When we were there, the day was very cold and rainy and the wind strong and icy, so Thomas and I stayed inside the visitor's center while Timothy braved the weather and climbed to the top. (If you look carefully, you can see the steps leading to the top.) He said the view made it all worth it. It really is worth seeing. I only wish it had been a better day!

The largest prehistoric Indian site north of Mexico, the original mounds covered about 4,000 acres and included at least 120 mounds. It is now a U.S. National Historic Landmark and is worth the visit!

NEXT TIME: SPRINGFIELD, ILLINOIS AND THE LINCOLN PRESIDENCY

Posted by theworldaccordingtobarbara.com at 2:02 PM No comments: