Oh, Starbucks where art thou?! 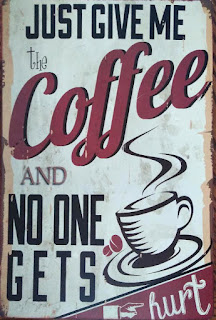 We began our third day of following in Abe Lincoln’s footsteps with a desperate search for a decent cup of coffee. No offence to our friends in Kentucky and Indiana, but your coffee is to our Western tastes utterly awful! At first I thought it was the motel coffee that was to blame. Percolated sawdust could be excused as a cost saving measure, but as we found out, everywhere we stopped the coffee had the same horrible taste. We were reduced to eating chocolate covered coffee beans in desperation!

Now, we come from a land where there’s a Starbuck’s on every corner so we are used to the luxury of a $5 brew of gourmet coffee beans picked at the peak of perfection and then caressed into heavenly sensations upon the tongue. So we were completely baffled as to why whole states seem to prefer this ghastly taste! We stopped at every likely café along the way, hoping against hope for something at least resembling the aromatic caffeinated pleasure we are accustomed to, but nooooo. It was in Illinois that our frantic search was finally rewarded with steaming cups of Seattle’s Best, which we sipped with heightened appreciation of life’s little pleasures. 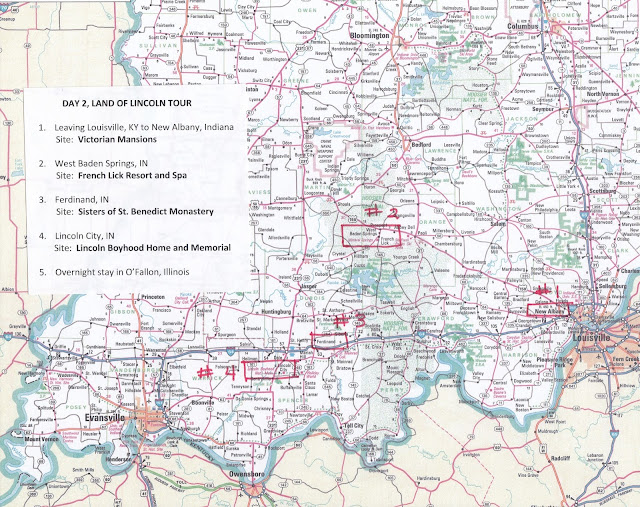 Map of our journey on Day 2

Before driving to the Lincoln Boyhood Memorial, we planned to see as many of the other interesting sites as we could along the way. After a quick hop across the border into Indiana from Kentucky, we stopped in New Albany and marveled at a fabulous street of meticulously restored Victorian homes, then on to an eye-popping resort out in the middle of nowhere called The French Lick Resort, built to take advantage of natural hot springs. We then headed south, stopping in Ferdinand and toured a lovely Monastery. Being the only visitors, it was nice to just wander around and have it all to ourselves.  Finally, our last stop of the day was the Lincoln Boyhood Memorial Park. (More on these sites plus links at the end of the blog!)

“My childhood-home I see again,

And gladden with the view:

And still as mem’ries crowd

There’s sadness in it too.”

After losing his court battles to save his Kentucky farm, Thomas Lincoln, his wife Nancy and children, Sarah and Abe, packed up their belongings and headed to Indiana to a 160 acre claim near Little Pigeon Creek. Here in Indiana, he would have clear title to his land and the slavery he abhorred was prohibited. Abe was 7 years old and would spend the next 12 years helping his father turn that acreage into a productive farm. The first two years went smoothly until his mother Nancy contracted milk sickness while helping a neighbor with the disease and died on October 5, 1818. It took physicians years to understand this deadly disease that took so many lives. They discovered that cows eating a plant called “white snakeroot”, which contained a deadly toxin, passed it on in their milk. It somehow didn’t hurt the cow, but was fatal to those who drank their milk. Abe was only 9 when he had to help bury his mom. It was a huge loss to the little boy who was as sensitive as he was intelligent. “All that I am or hope to be, I owe to my angel mother. God bless her.” 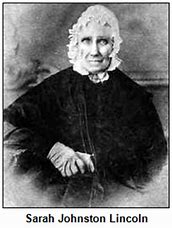 Thomas married again a few months later to Sarah Johnston, a widow with three children he had known in Kentucky. That may sound a bit fast by our standards, but without a helpmate, life would have been impossible in that sparsely populated and raw land. Thankfully, she was a kind and loving mother to Abe and encouraged his love of reading. He read constantly from the crate of books she brought with her. It proved to be an education in itself since he only had one year of formal schooling during the 14 years he spent in Indiana.

In 1828, when he was 19, his beloved sister, Sarah, died, inflicting more scars on his heart. It was time for him to strike out on his own and that same year got a job piloting a flat boat down the Ohio River to New Orleans. Seeing a slave auction for the first time, it was something that greatly disturbed him and he never forgot the sight. However, his piloting experience would lead to a huge turning point in his life just a few years later when the family pulled up stakes and moved to Decatur, Illinois.  (Next blog!) 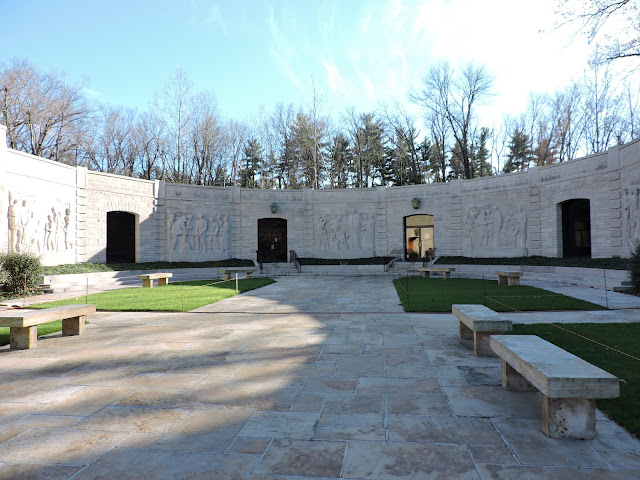 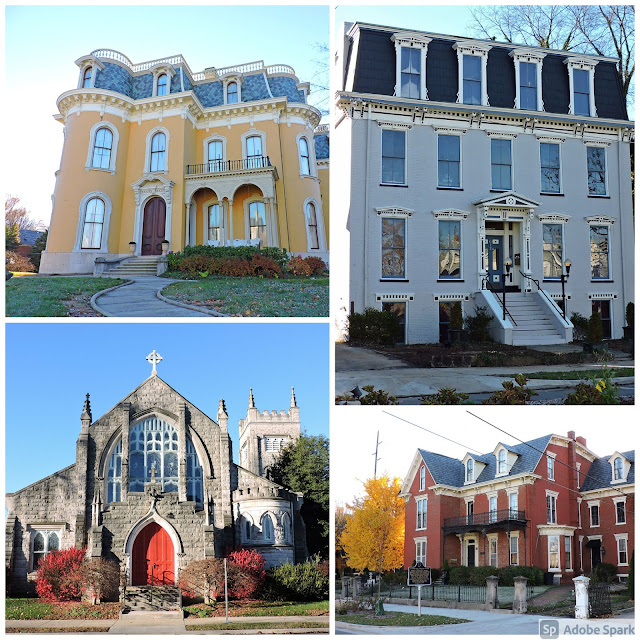 Founded in 1813, New Albany’s wealth built quickly in this beautiful setting along the Ohio River, starting with ship building and furniture making to producing power. William Culbertson became the wealthiest man in Indiana with his utility company. His mansion, which is beautifully preserved, is the crowning jewel on a long street of Victorian jewels. (Culbertson mansion upper left)

This place will knock your socks off! It is something so unexpected and opulent. Besides golf and mineral spa, there are acres of scenic beauty to wander in and enjoy. I don’t know anyone who has ever heard of it, and yet here it is, in the middle of nowhere, serenely tucked into the trees like a surprise gift under the Christmas tree!  For a relaxing get-a-way, this would be top on my list! www.frenchlick.com

Video of Lobby. You have to see this! 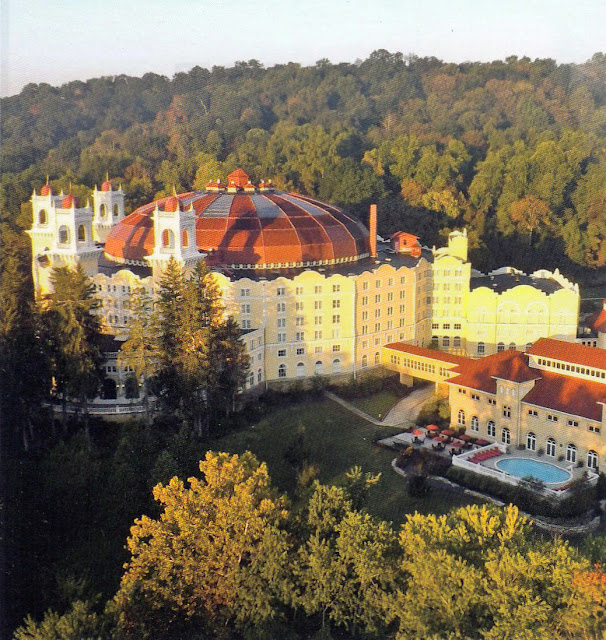 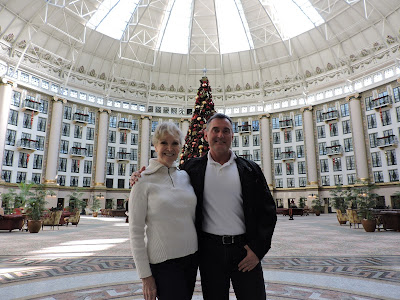 Tim and I in their vast lobby. They were just setting up for Christmas.

#3 FERDINAND, INDIANA and the SISTERS OF ST. BENEDICT 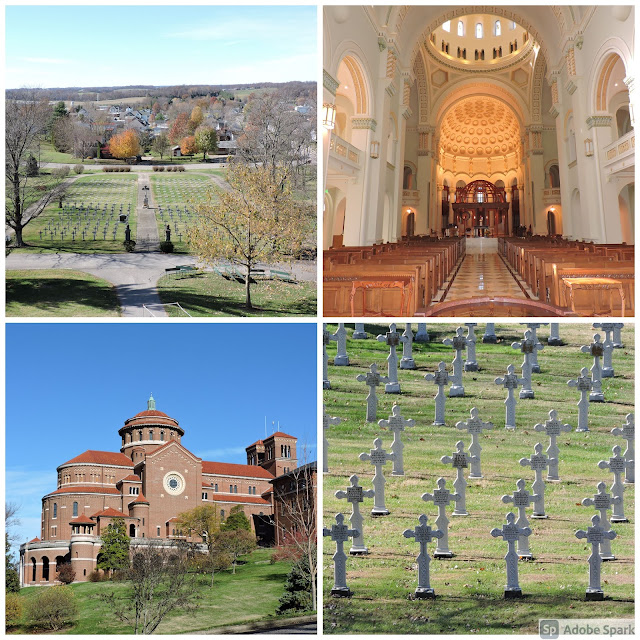 Founded in 1867, the Sisters are one of the largest communities of Benedictine sisters in the US. Dubbed “The Castle on the Hill”, the monastery grounds cover 190 acres of peaceful Indiana landscape. We were invited to wander around and marvel at the beauty and peace. www.thedome.org

NEXT TIME:  LINCOLN COMES INTO HIS OWN IN NEW SALEM, ILLINOIS

Posted by theworldaccordingtobarbara.com at 12:40 PM 6 comments: