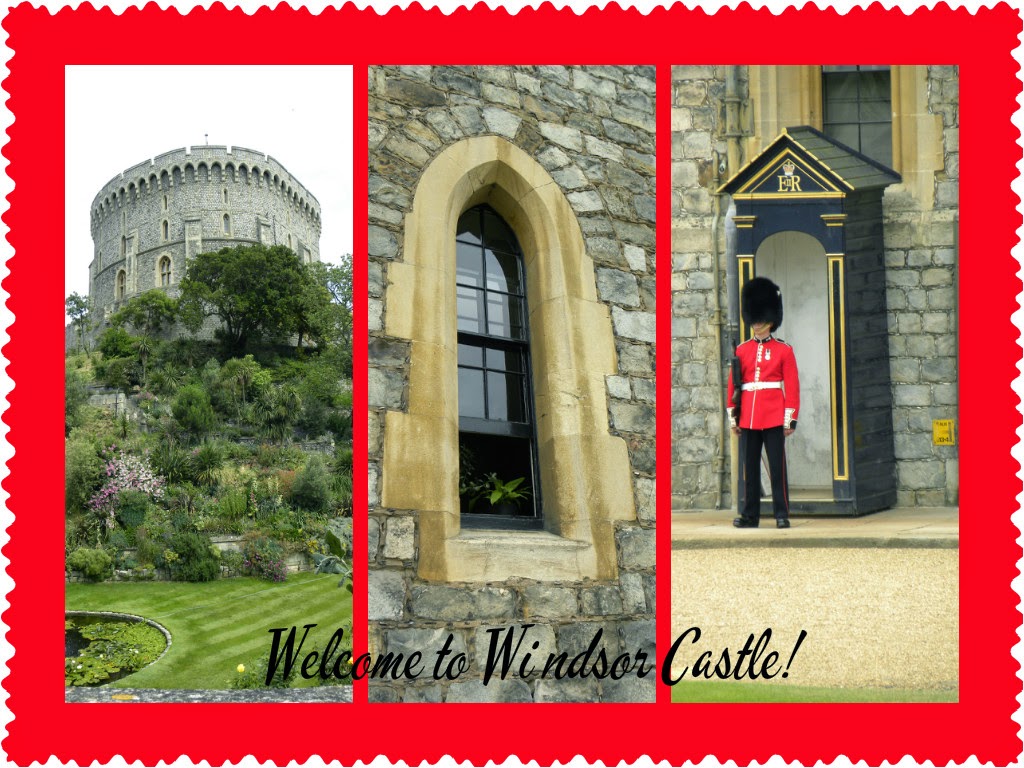 We stood frozen in the doorway utterly speechless, our mouths dropped open in astonishment. Gold!  An entire room encrusted with gold! Floor to ceiling, wall to wall, it’s rich luster glittered on every ornate surface. Breathtaking hardly described it!

“Come in, Ladies!” The attendant smiled as she motioned us into this wondrous sea of gold. “I love the look on people’s faces when they see this room!”

A few of us women from the tour had banded together to see the castle and here we stood, huddled together like school girls at our first dance. Encouraged, we edged down the ramp and into the Grand Reception Room of Windsor Castle. Simply magnificent, it rivaled anything I’d seen at Versailles. I missed seeing Buckingham Palace, twice, but this room made up for it. Windsor Castle is every inch a royal palace! 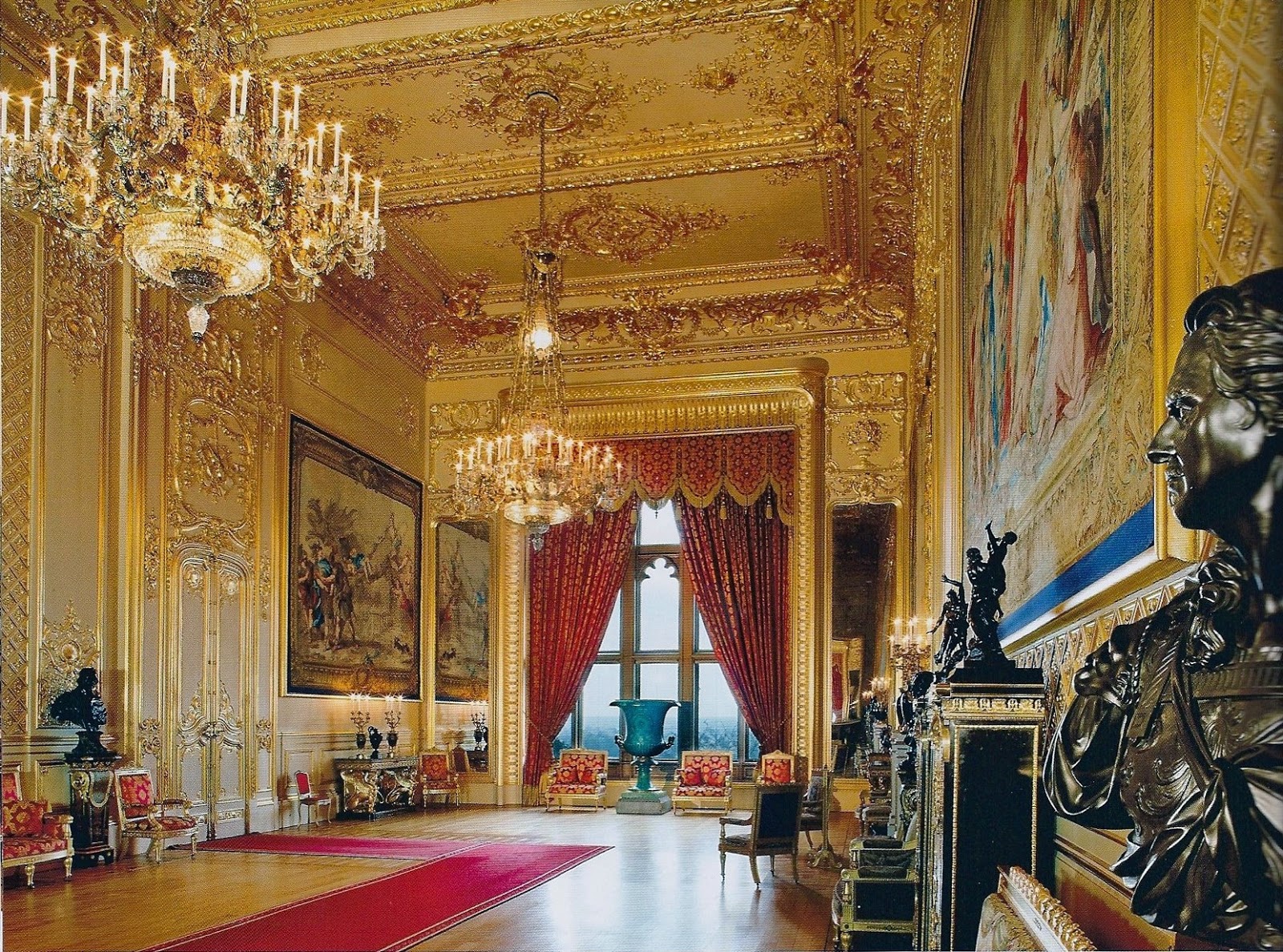 The Grand Reception Room
Among many others,  this room had been almost gutted
by a terrible fire that ripped through the Castle in 1992.
(Photo courtesy Windsor Castle Official Souvenir Guide)

Thrilled that the last stop on our tour of Devon and Cornwall would take us to Windsor Castle, I strained to get a first glimpse of it from the bus window. Finally it came into view, looming over the landscape in all its Gothic splendor. Wonderfully medieval, I expected St. George and his dragon to hail us in! 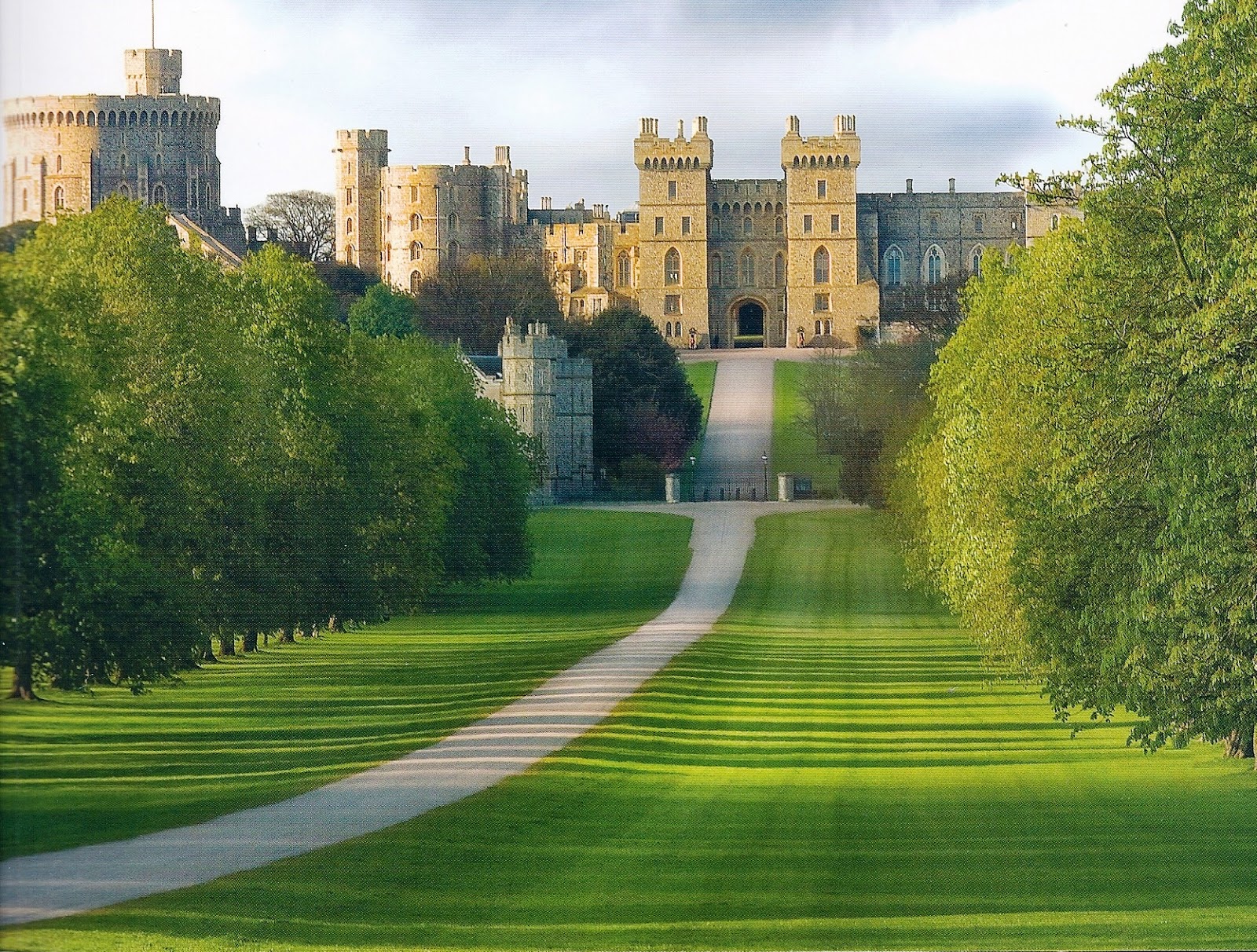 I’d done a little homework on Windsor Castle and discovered it had a lot to brag about. It just happens to be the oldest and largest inhabited castle in the world! Originally built by William the Conqueror in the eleventh century, it has been in continuous use for nearly a thousand years, housing a total of 39 monarchs. Perched high above the Thames River, its close proximity to London and fine hunting made it a royal favorite from the start. Even the current royal family, The House of Windsor, adopted its name, shucking their German surname in 1917 in favor of something solidly English. And, nothing could be more symbolic of England than Windsor! 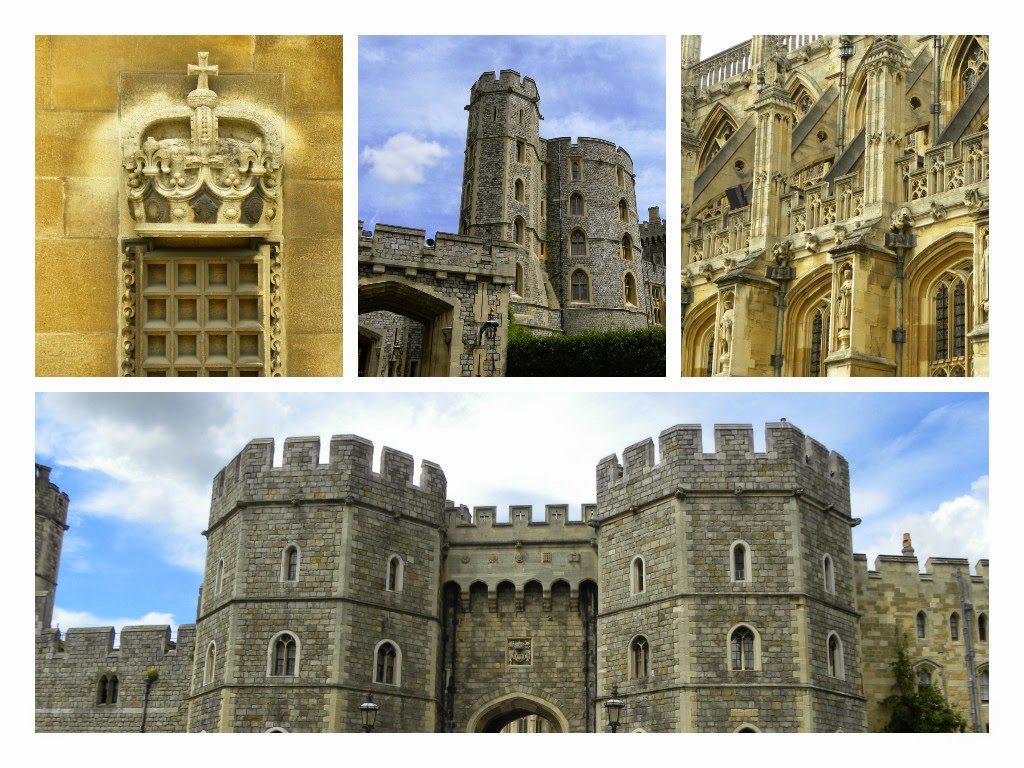 The massive Norman castle retains much of its original layout, consisting of two sets of buildings and courtyards (called wards) on either side of an imposing Round Tower. The Upper Ward houses the private royal apartments and the Lower Ward, the State Rooms. 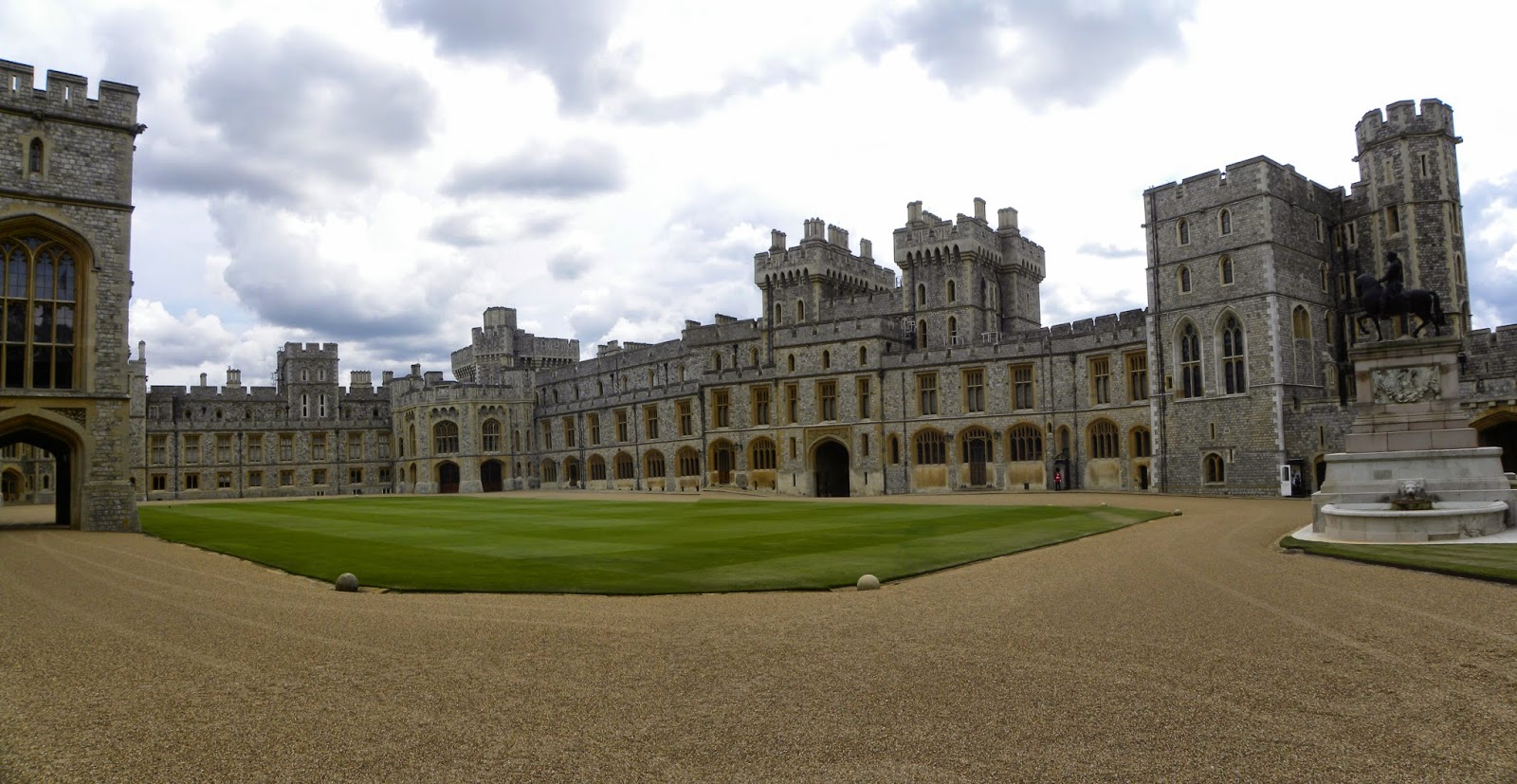 The Royal Apartments in the Upper Ward
Inside Windsor Castle

Our tour took us through the elegant State Rooms, each one more impressive than the last with its symbols of power and unimaginable wealth. The scale and opulence of the rooms are almost impossible to describe, each is like a Faberge Egg, priceless, unique and stunning. We couldn't take any pictures on the inside, so I have to rely on the Official Windsor Castle Guidebook to show you some of the interiors. All I can say is, the pictures cannot do justice to this awe inspiring place. I hope you can see it for yourselves some day. 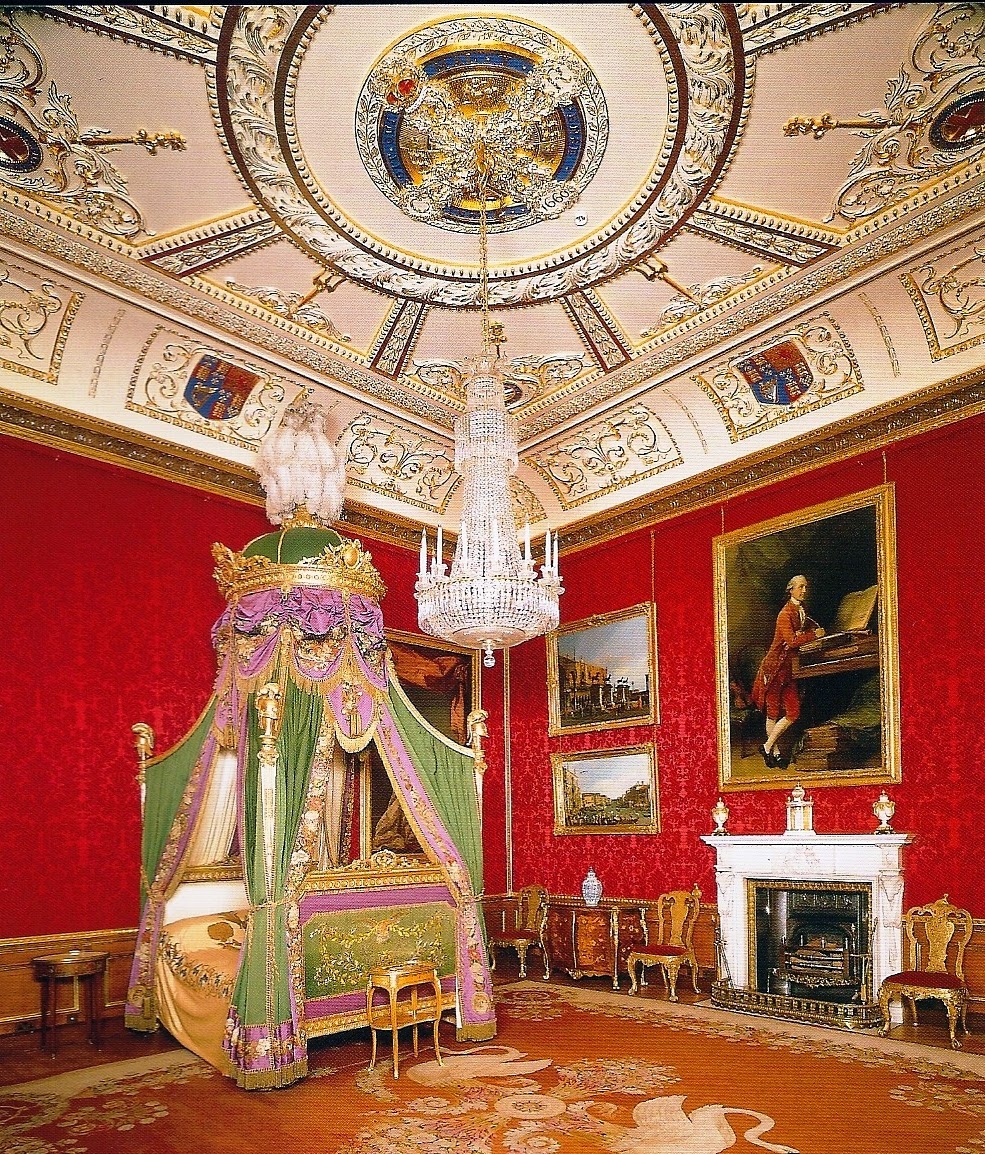 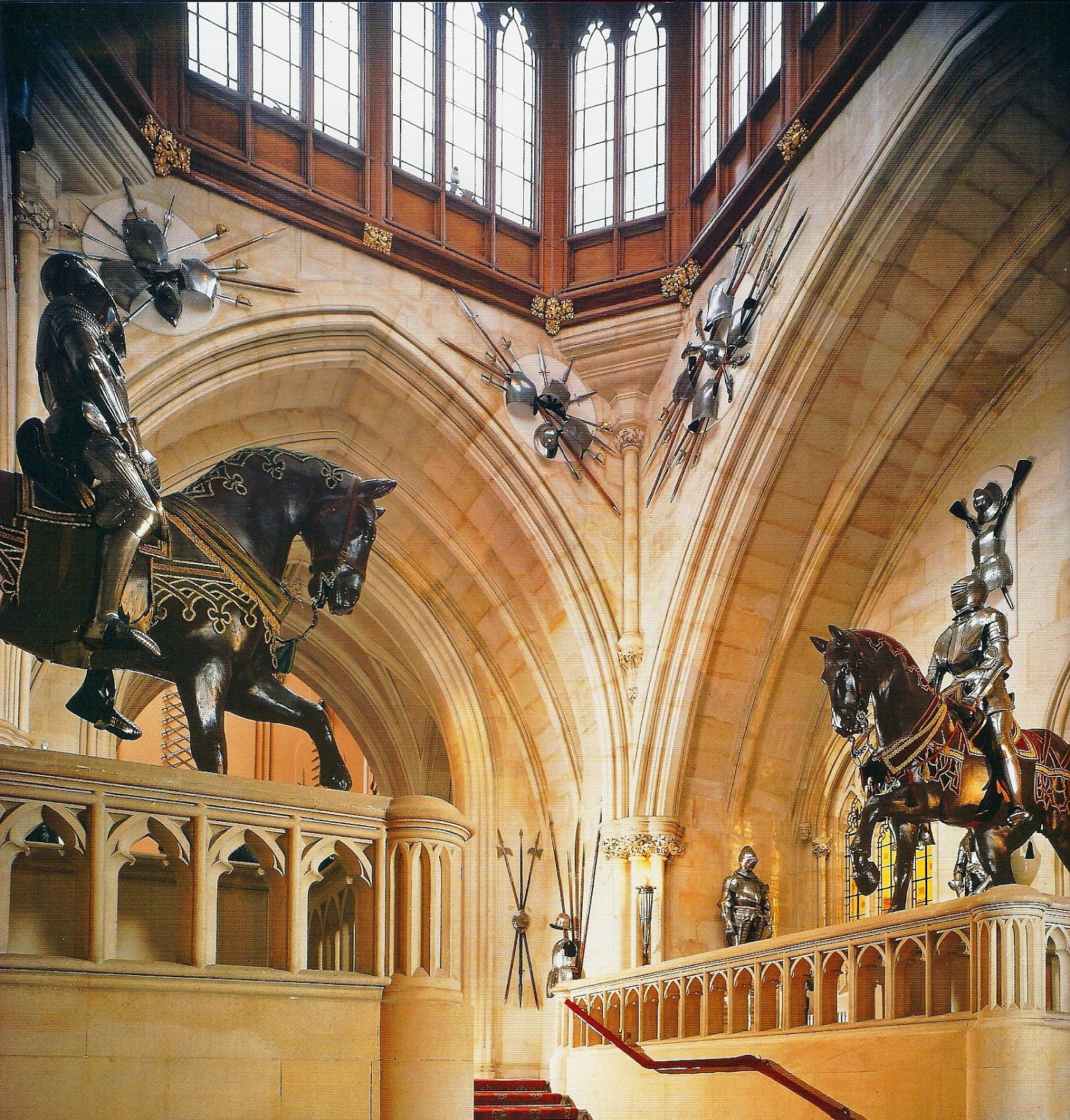 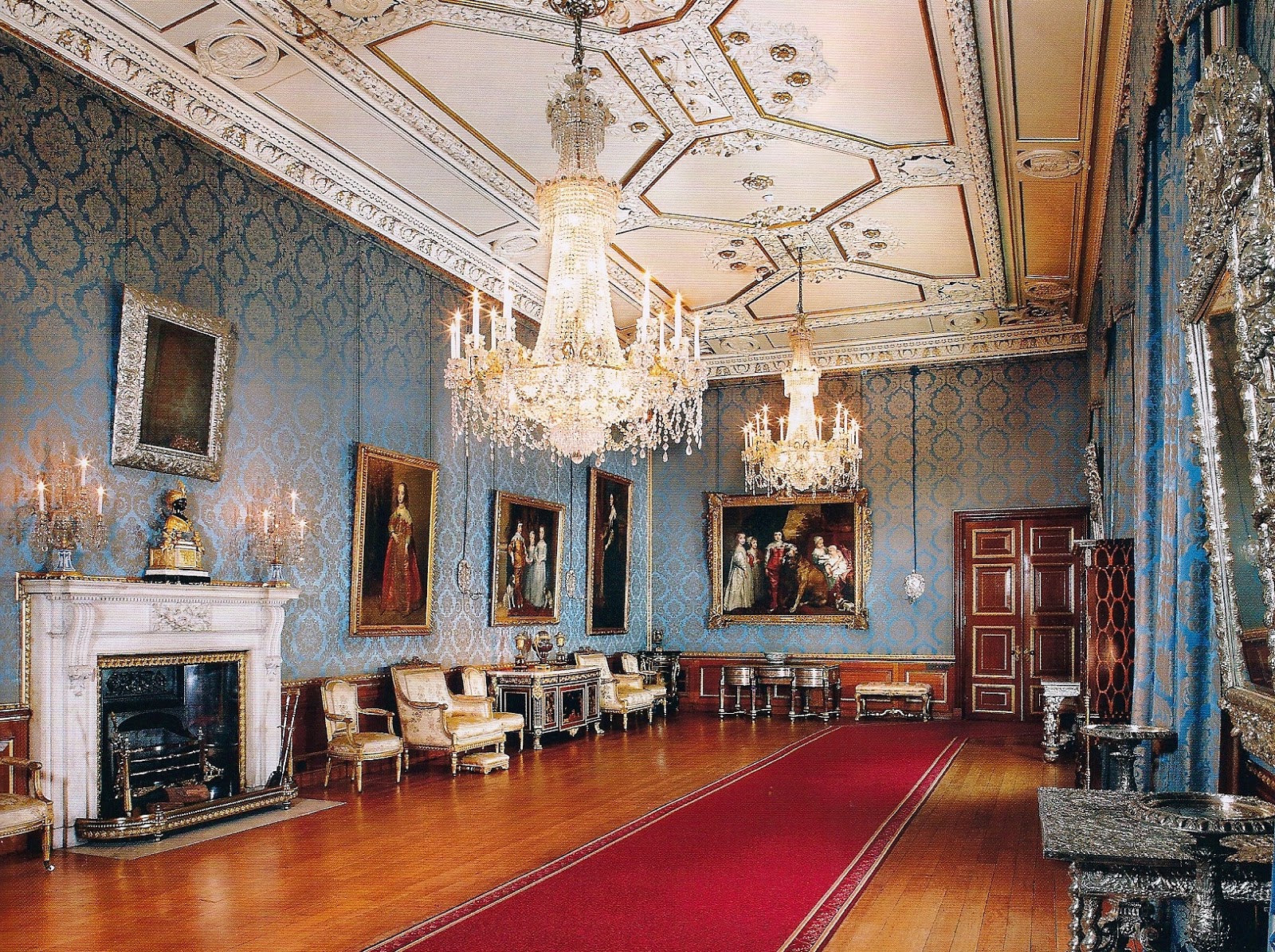 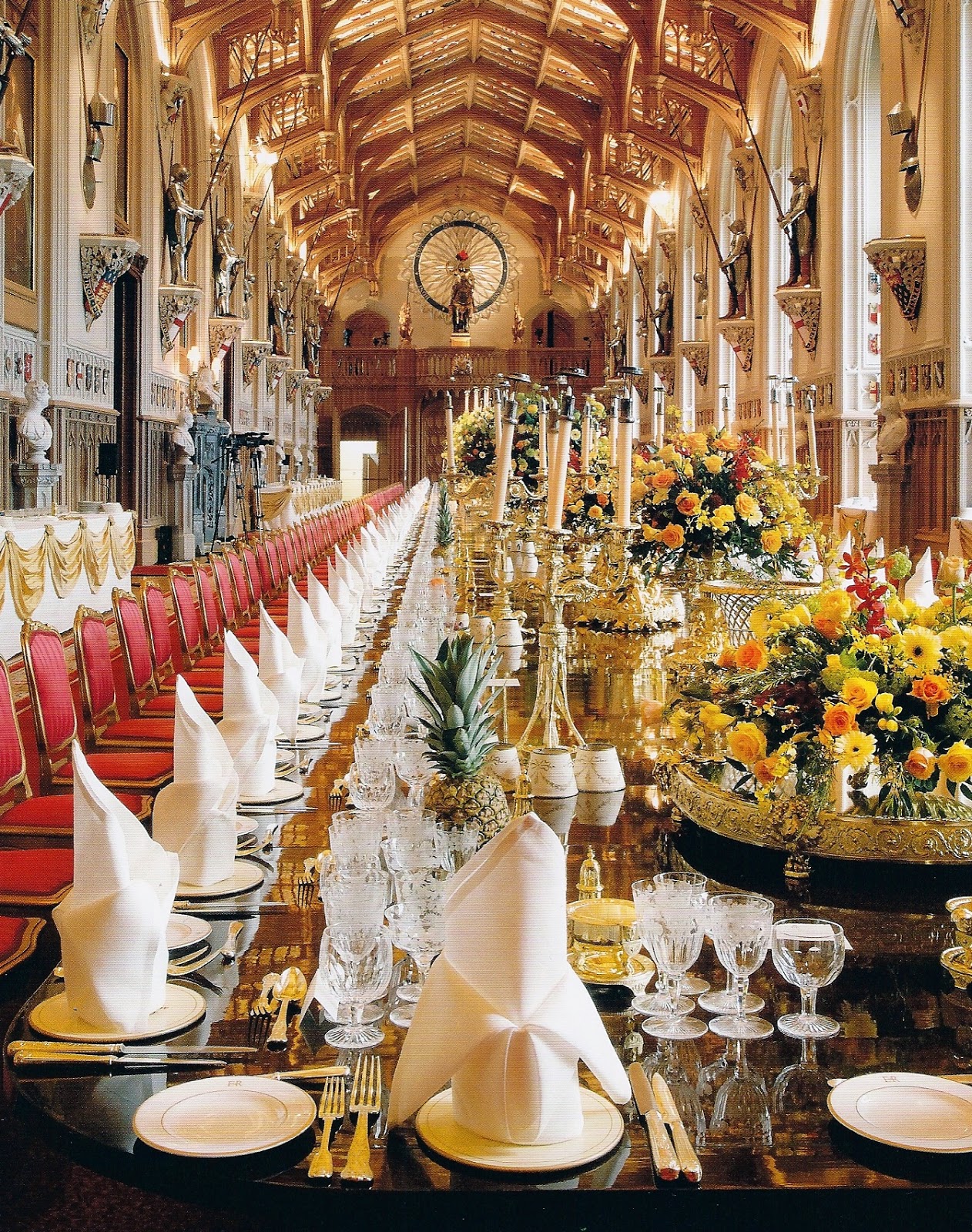 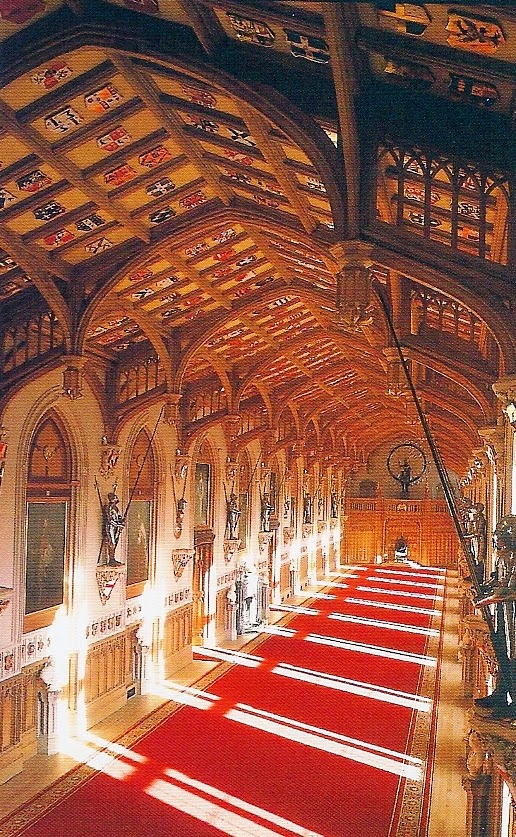 St. George's Hall, bristling with medieval armor, displays the crests of the
Order of the Garter, an ancient order of Knights. 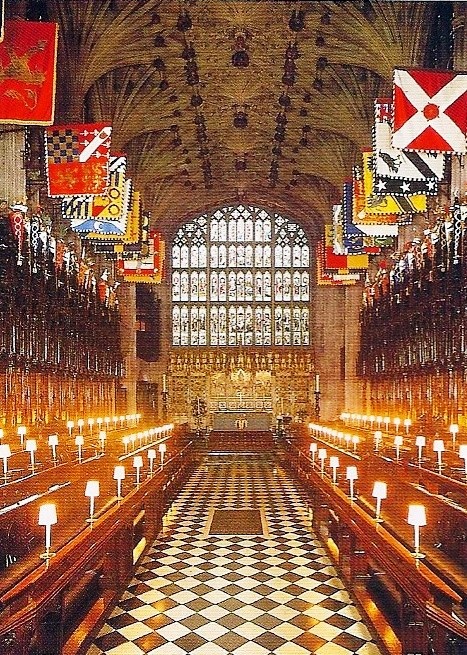 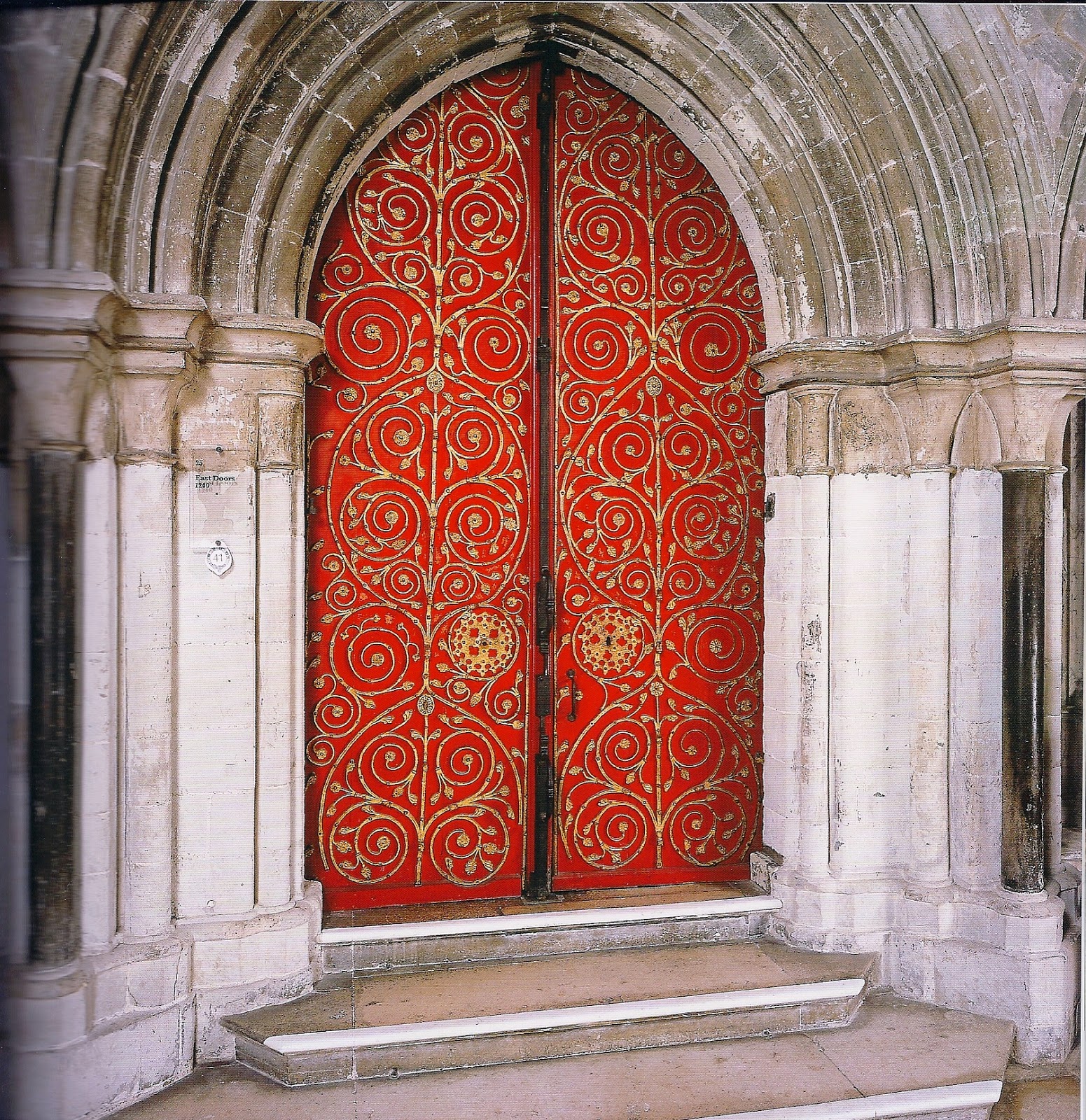 Several kings and queens are buried in St. George’s Chapel; the most famous is Henry the VIII. He is buried alongside his favorite wife, Jane Seymour who died in childbirth. They are buried under the dark plaque in the center of the choir.
The Royal Giftshop

Ushered into the gift shop after the tour, we spent a few moments browsing the trinkets and souvenirs before heading home to London. One of our own found a shower cap that tickled her fancy, although that wasn't what it was called. Labeled a royal "douche cap", we all snickered and had to try one on. School girls, all the way!! 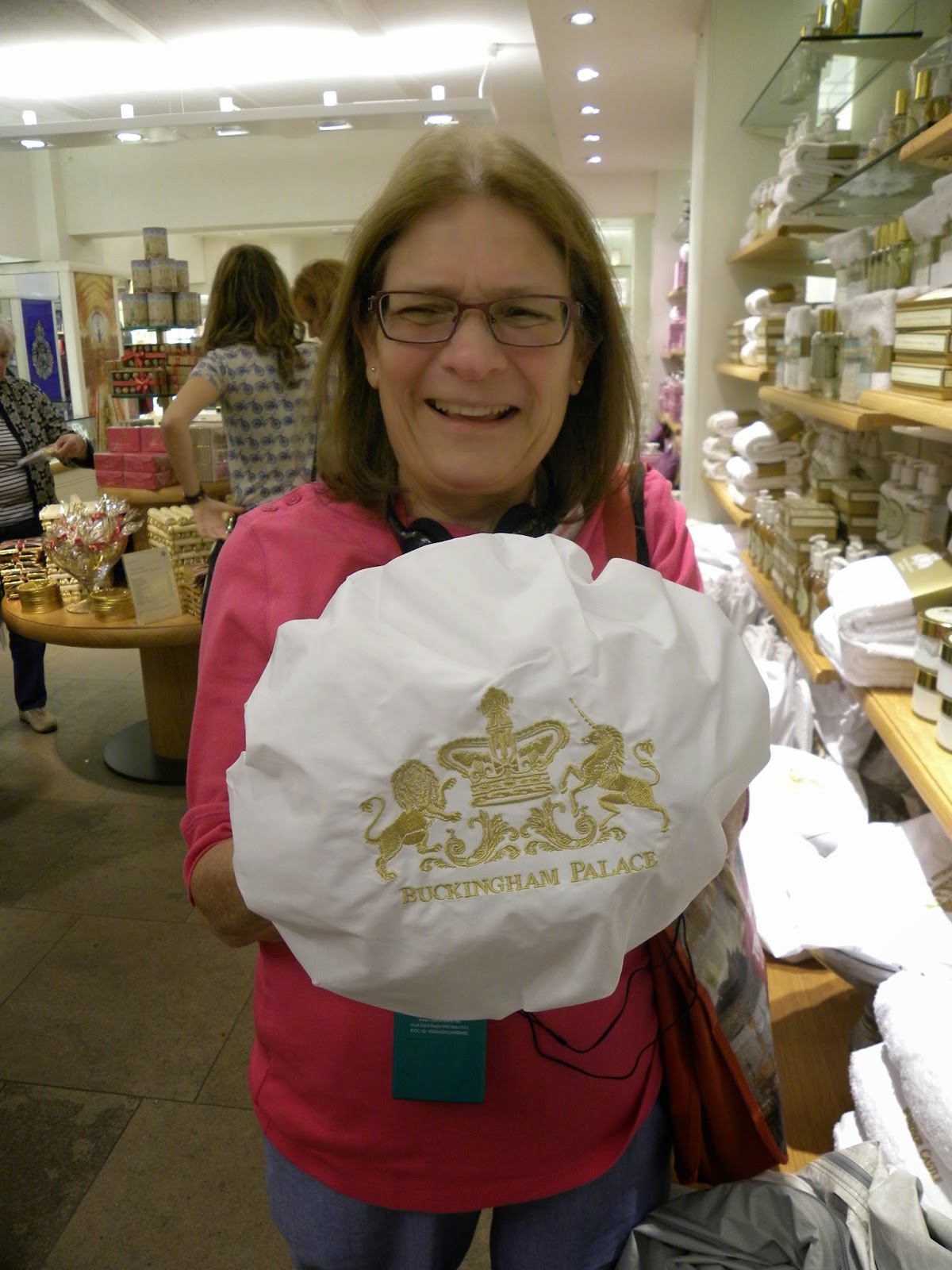 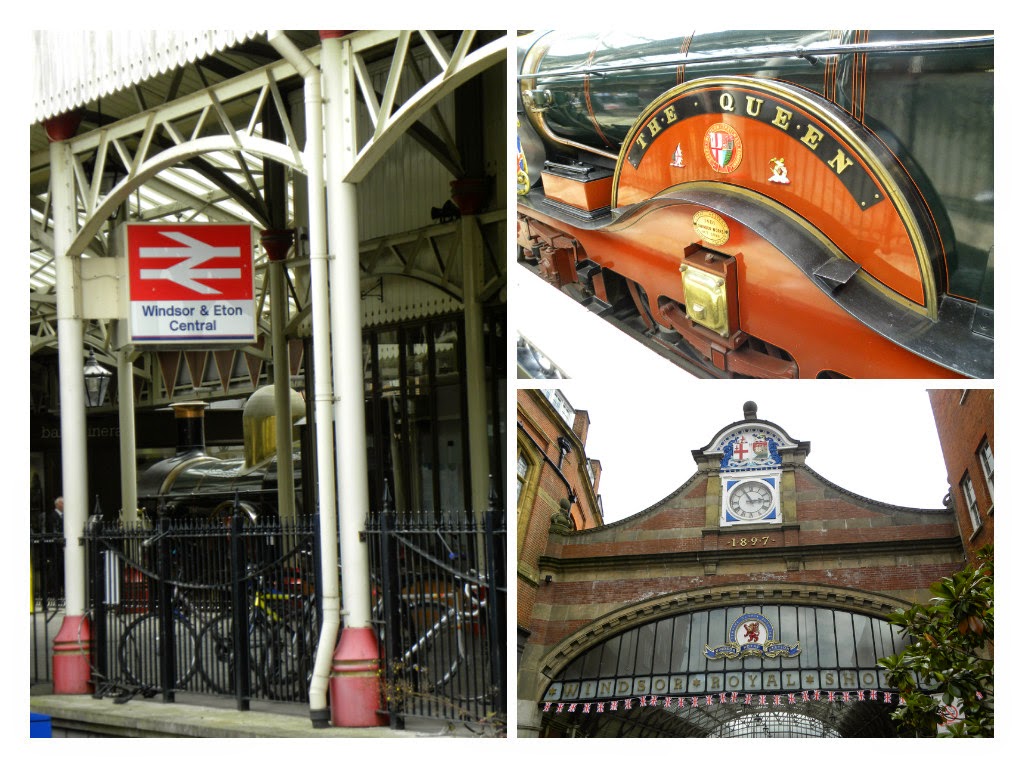 I thoroughly enjoyed this Trafalgar tour, "The Best of Devon and Cornwall". I highly recommend it to anyone who wants to see this very special part of England. Just be prepared to fall in love! (Read all about the trip starting with the blog "Devon, Cornwall and the Cotswolds, Oh My!", posted on 8/14/2014.)

***Most importantly, a special thank you goes to Steve and Michael (our tour guide and driver), for a safe and very fun trip! Thanks, Guys!