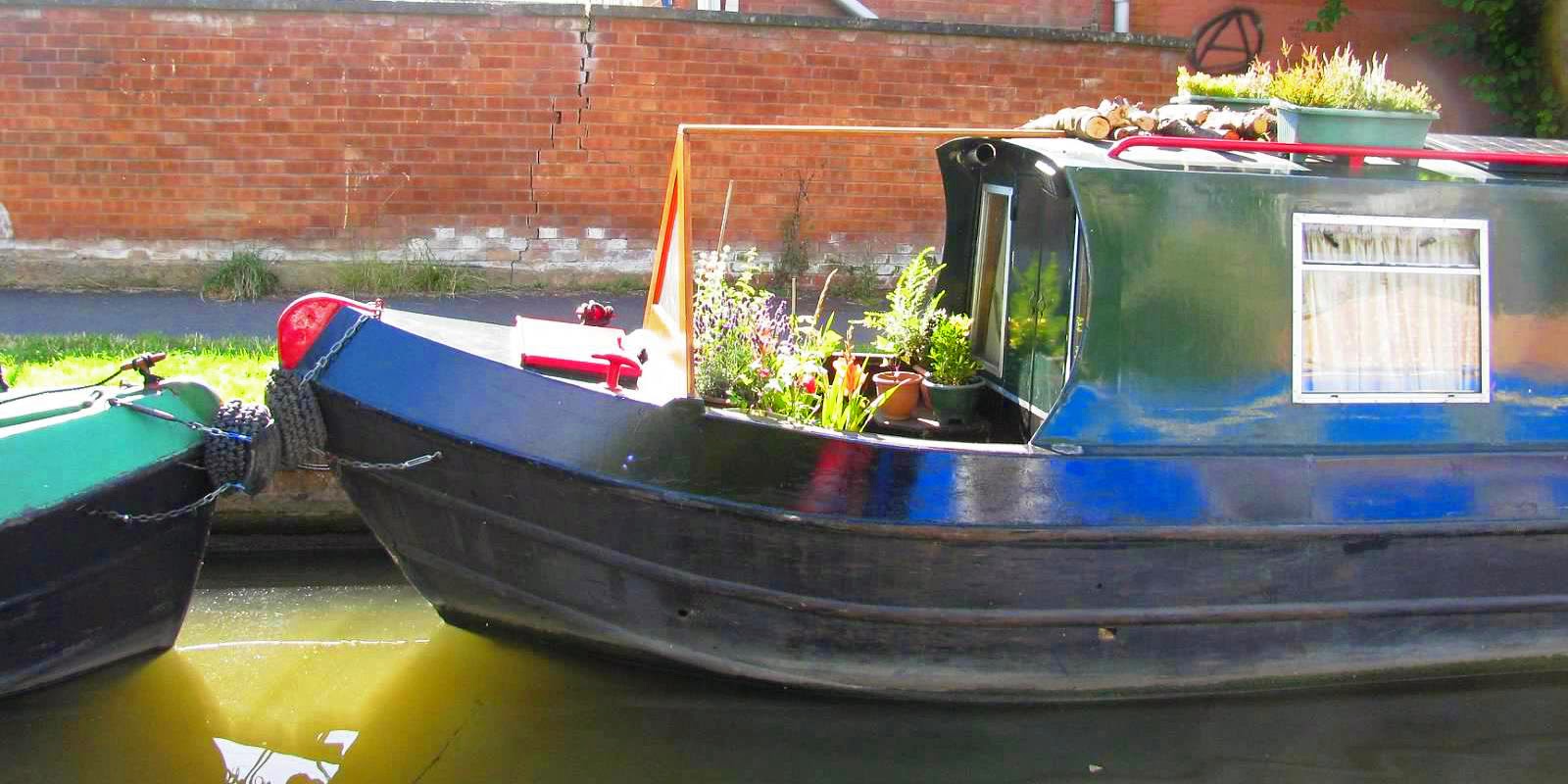 A few years ago, a book came out entitled, 1000 Things To See Before You Die. I’d like to add another section to that book and call it, 1000 Things to DO Before You Die. And, right smack on top of that list I’d put: Rent a Narrowboat and Cruise the Canals and Rivers of England. Kay, her husband Tom and I did just that this past summer and I have to say, it’s something to brag about. It takes an adventurous spirit (and skill!) to pilot those long, narrow canal boats (they generally measure 6’across by 35’ to 60’ long) through dozens of ancient locks that are barely wide enough to squeeze through.

I can’t take any credit for that much courage—that belongs to my friends, Kay and Tom. About a dozen years ago, they set out for an extended tour of England on their own. They are the only people I know of who get full use of their time shares (they have two), and used one for a week on a canal boat. Just the two of them! Tom, a former pilot, is fearless when it comes to handling mechanical things and without really knowing what they were getting into, decided “Why not?” It would certainly be something to talk about after they got home. Well, the fact is, they couldn't stop raving about it. It was an experience of a lifetime, they said, and they would do it again in a heartbeat.

Finally, they decided that time had come to relive that experience, prompted I’m sure, from my constant harassment to “Take me! I want to go!” Another good reason for going would also fulfill a promise to their granddaughter, Sutherland, who would soon turn 18 and graduate from high school. And, so the planning began. 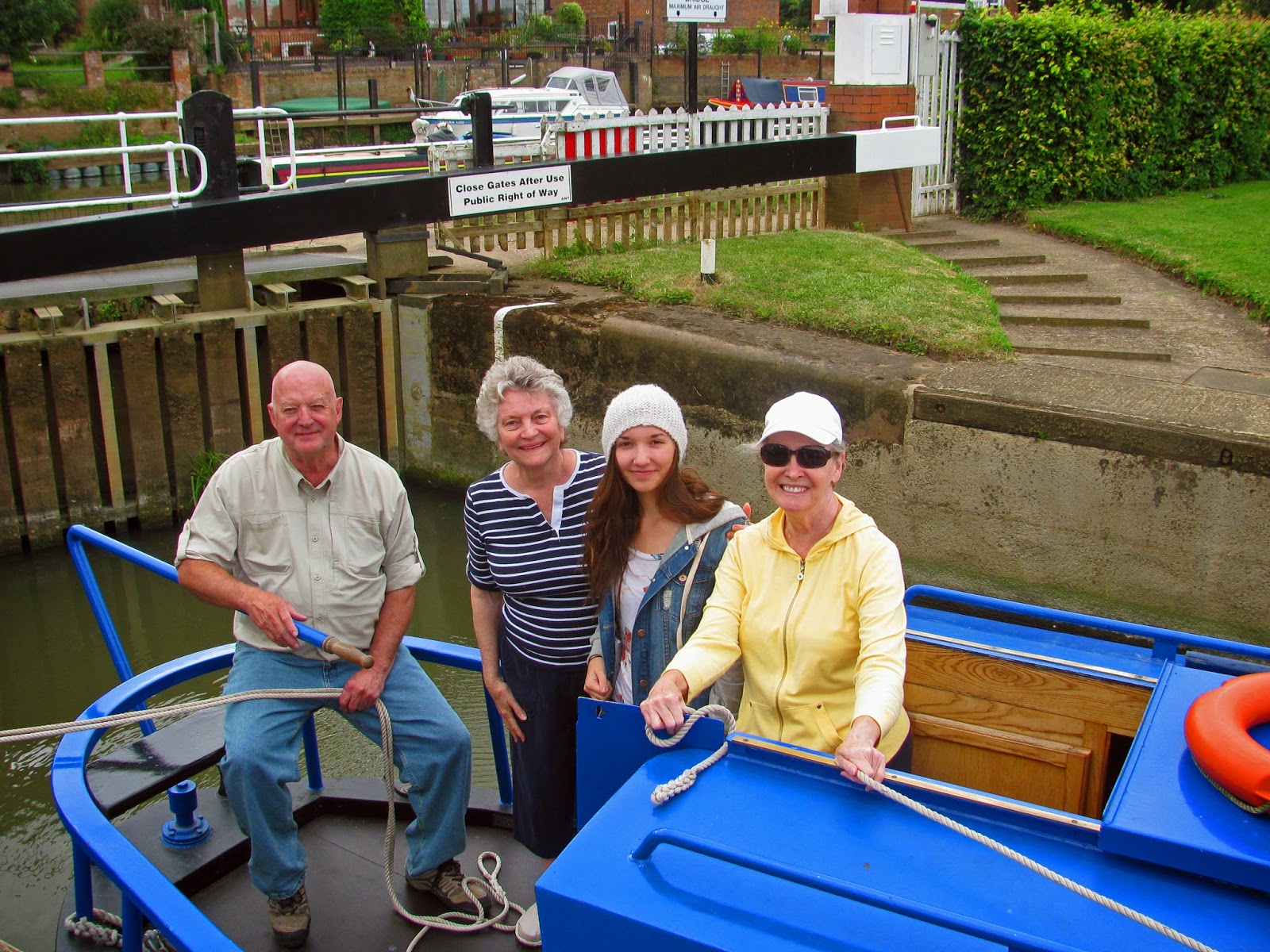 (Left to Right) Captain Tom, and his 1st Mate, Kay,
Scullery maids and Swabbies, Sutherland and Barbara (me).

Initially, our plans included sailing from Worcester, located in the heart of England on the Severn River, down to the Avon River. Once on the Avon, we would continue up to Stratford-upon-Avon, then turn around and head back to Worcester. Our plans changed when we realized that it was too far to go in a week and wouldn't allow us time to see many of the places we had on our list to visit. We decided a better plan would be to take the boat as far as Tewksbury where the Severn and Avon meet. We’d stay there for a couple of days, then return to Worcester and dock for the rest of week using the car to tour the Cotswolds, Oxford, Stratford-upon-Avon, and Warwick Castle.

So, with maps and guide books in hand, our trunk full of luggage and Tom at the wheel, we left London. Our adventure had begun!

Our Home Base in Worcester

After checking in at the rental office, Richard was enlisted to orient us landlubbers. He escorted us down to our boat for the week, The Lindal Iron Ore, and gave us a quick tutorial on how to operate it. With classic dry British wit, he first held up a long, deadly looking tool, "If you need to push off from the sides of the canal, use the pointy end, and the hooky end is good for retrieving your line, or each other out of the water. Now, this moppy thing. Right. I think you all know how to use that!" After several more minutes of explanation to us obvious novices, I'm sure he just hoped we wouldn't pull out and have a wreck immediately. 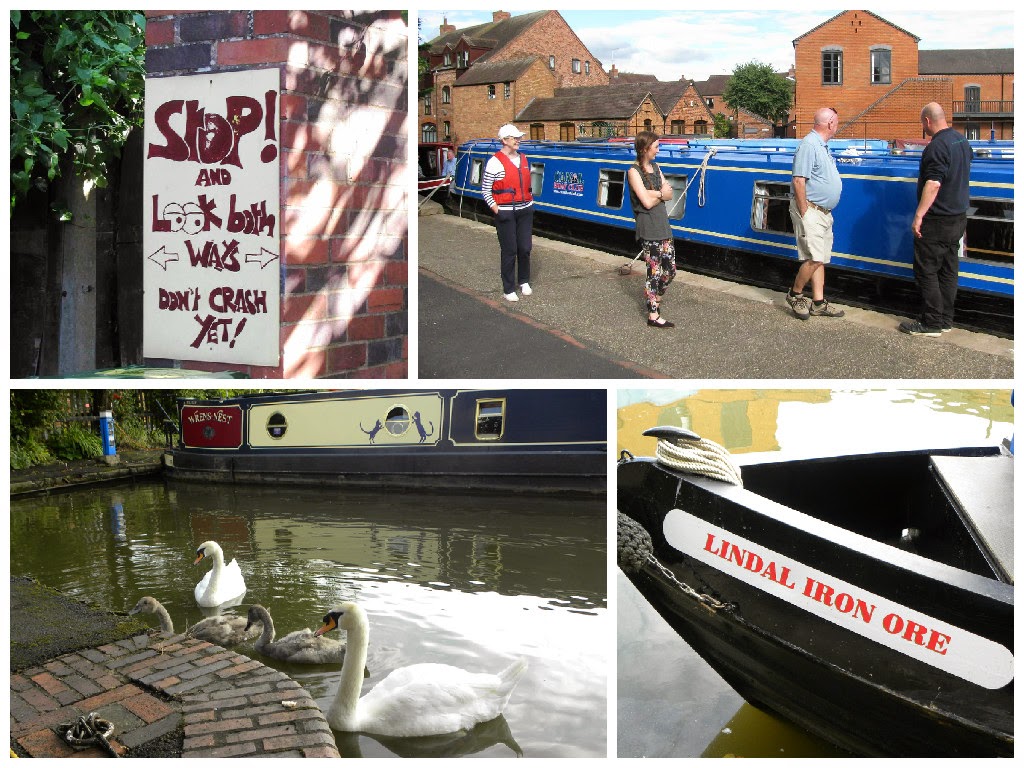 Camping on the Canal: featuring Sutherland, the Scullery Maid,
and our mascot, Paddington Bear.

Our fine vessel, the Lindal Iron Ore, looked to be about 50 years old, however it was clean and well maintained. It proved to be no frills camping for sure, but we had everything we needed. After all, this was all about the adventure! We had a stove, apartment sized fridge, and a microwave but no oven, and it came fully stocked with pots, pans and dishes. We couldn't get the TV to work, but no one missed it. We'd brought cards, games and books to keep us occupied. Besides, most of the time, we hit the sack soon after dinner anyway, worn out after the long days of sightseeing.

Sleeping arrangements vary depending on the size of the boat, and ours could accommodate up to six people, four comfortably. Sutherland and I had a small but private area with two bunk beds, and Kay and Tom shared the "master en-suite" which consisted of a full bed and a compact, camper sized bathroom and shower.

We cooked at least one or two meals a day, which meant lots of dish washing. And, and water was a bit of an issue. We were warned to conserve it by taking navy showers and above all, not to drink it. We bought bottled water everyday for drinking, and we boiled the boat's water for 5 minutes to kill any germs to wash our dishes. In order to get hot water, Tom had to start up the the engine for at least a half an hour, but after that, we had plenty for four people waiting in line to shower. Bottom line, it's true RVing, British style!

“And, locks is women’s work!” jeered Captain Tom in his best Jack Sparrow impression from the “Pirates of the Caribbean”. Locks are what we got too--in spades--dozens of them in every size and shape! And, it was  up to Kay, Sutherland and me to operate them all, by good old muscle power 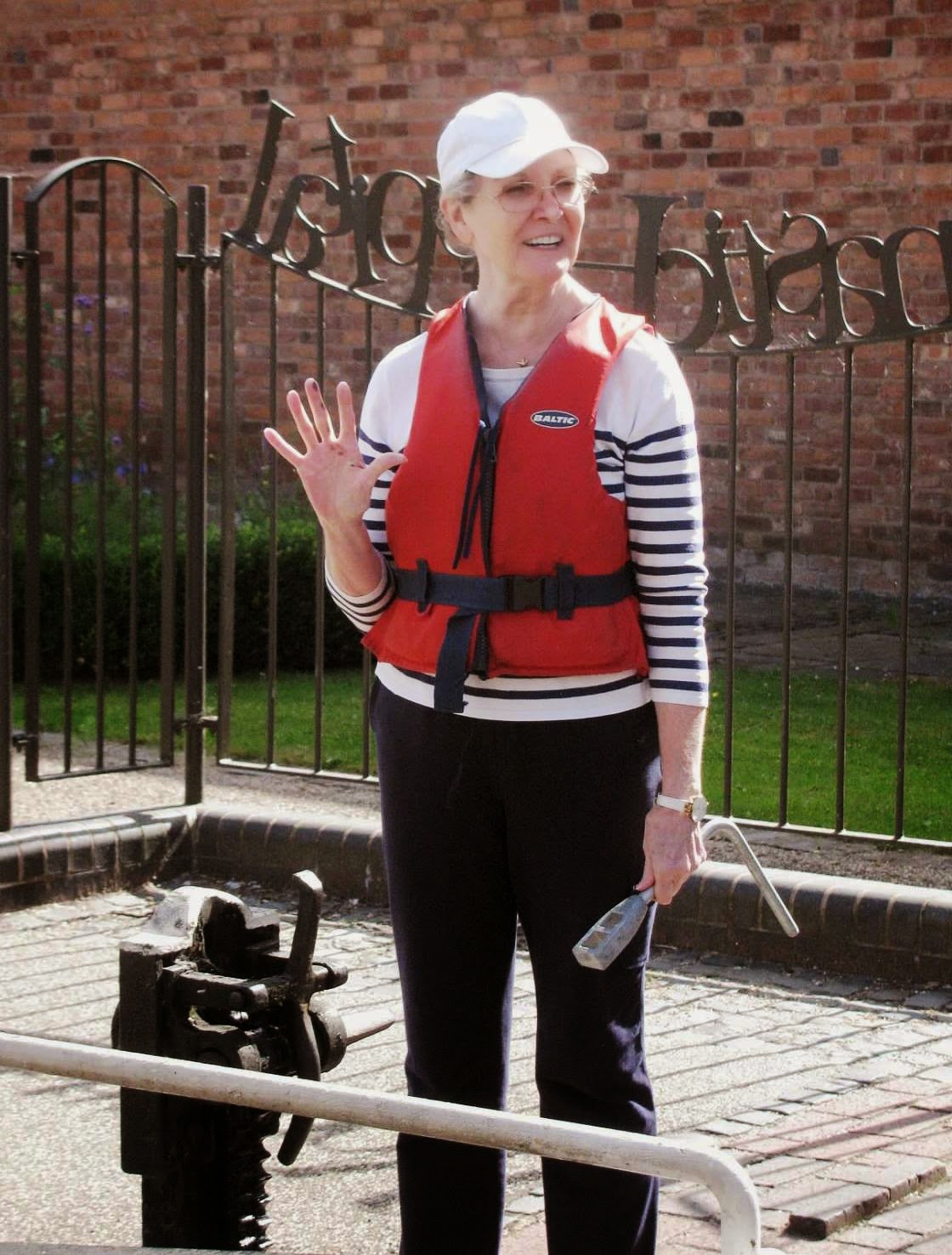 "Ewwww, look! This crank thingy made my fingers dirty!Who has the Purell?"

For all you landlubbers, the "crank thingy" is called a windlass, a detachable crank that operates the winding gear (the other greasy thing beside me). The winding gear allows the locks to either fill or empty with water. The water level then allows boats to either be raised or lowered in order to connect it to the canal in which it's headed. 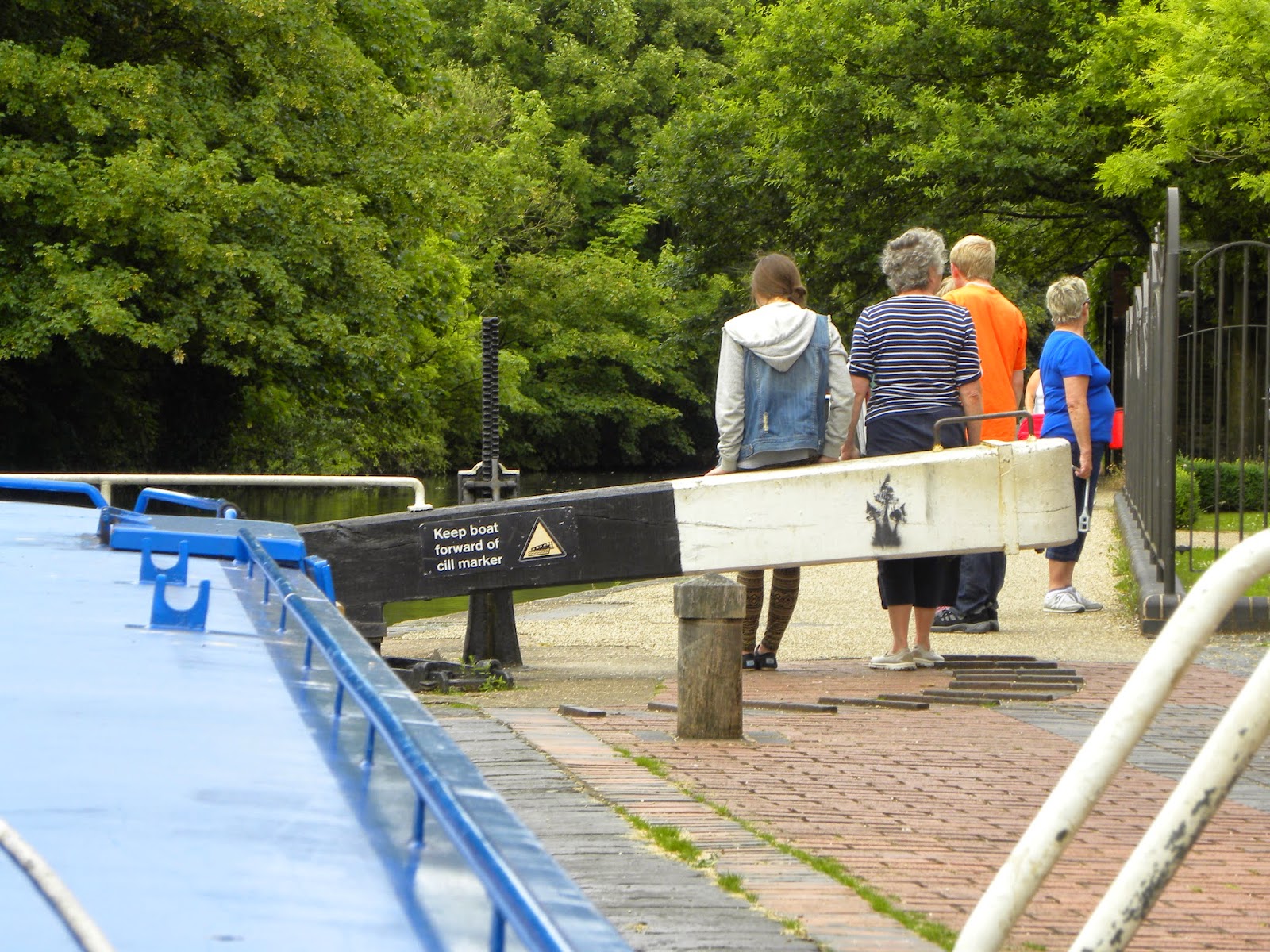 After the water has reached the proper level, the gigantic paddles, or gates must be hand operated on the smaller locks in the canals.


(Kay and Sutherland are waiting to open the paddles here to allow our boat to sail on.) We learned the hard way to wait until the water is completely filled or drained before putting our backs to them. If you wait, they move surprisingly easy! 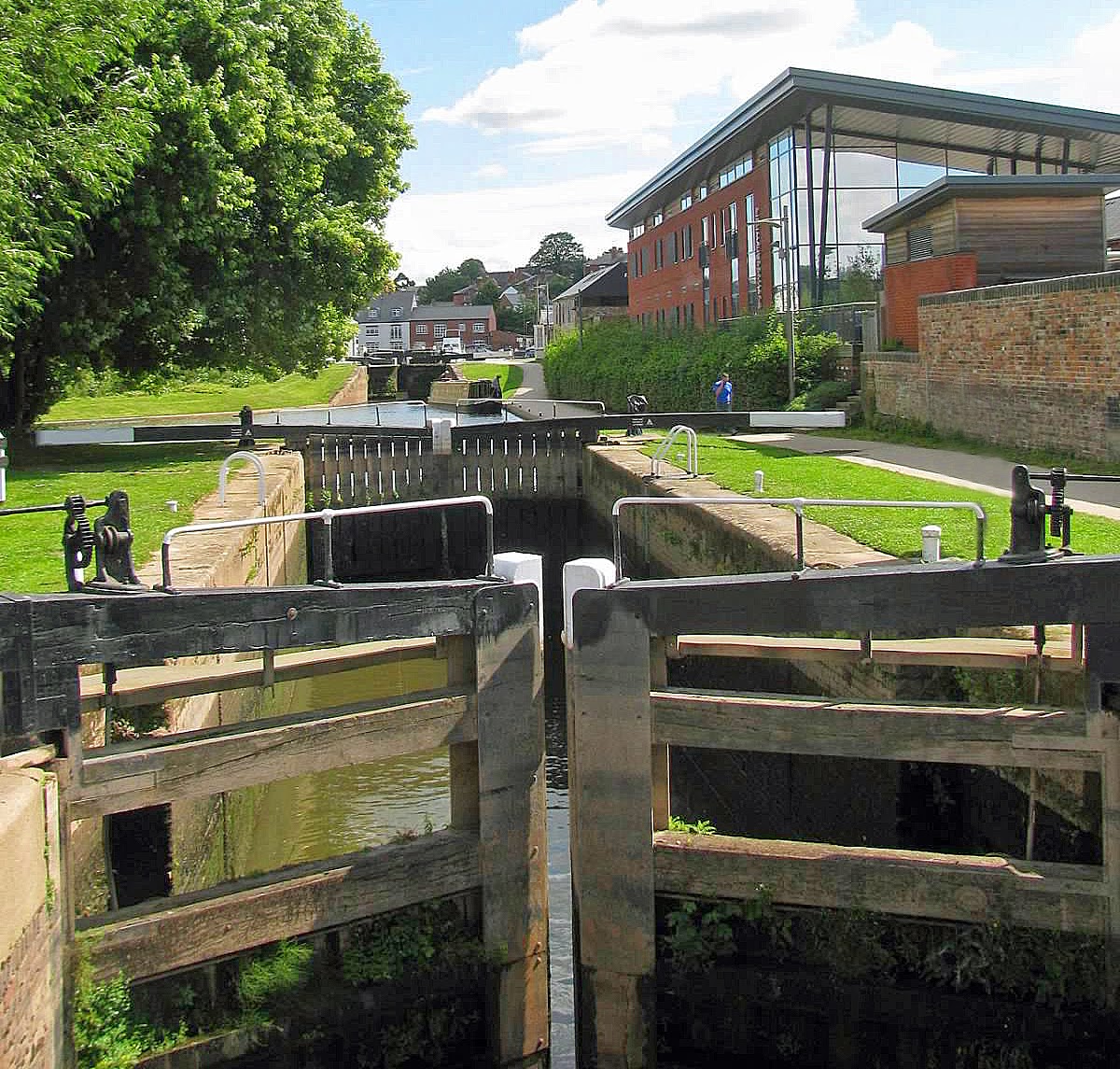 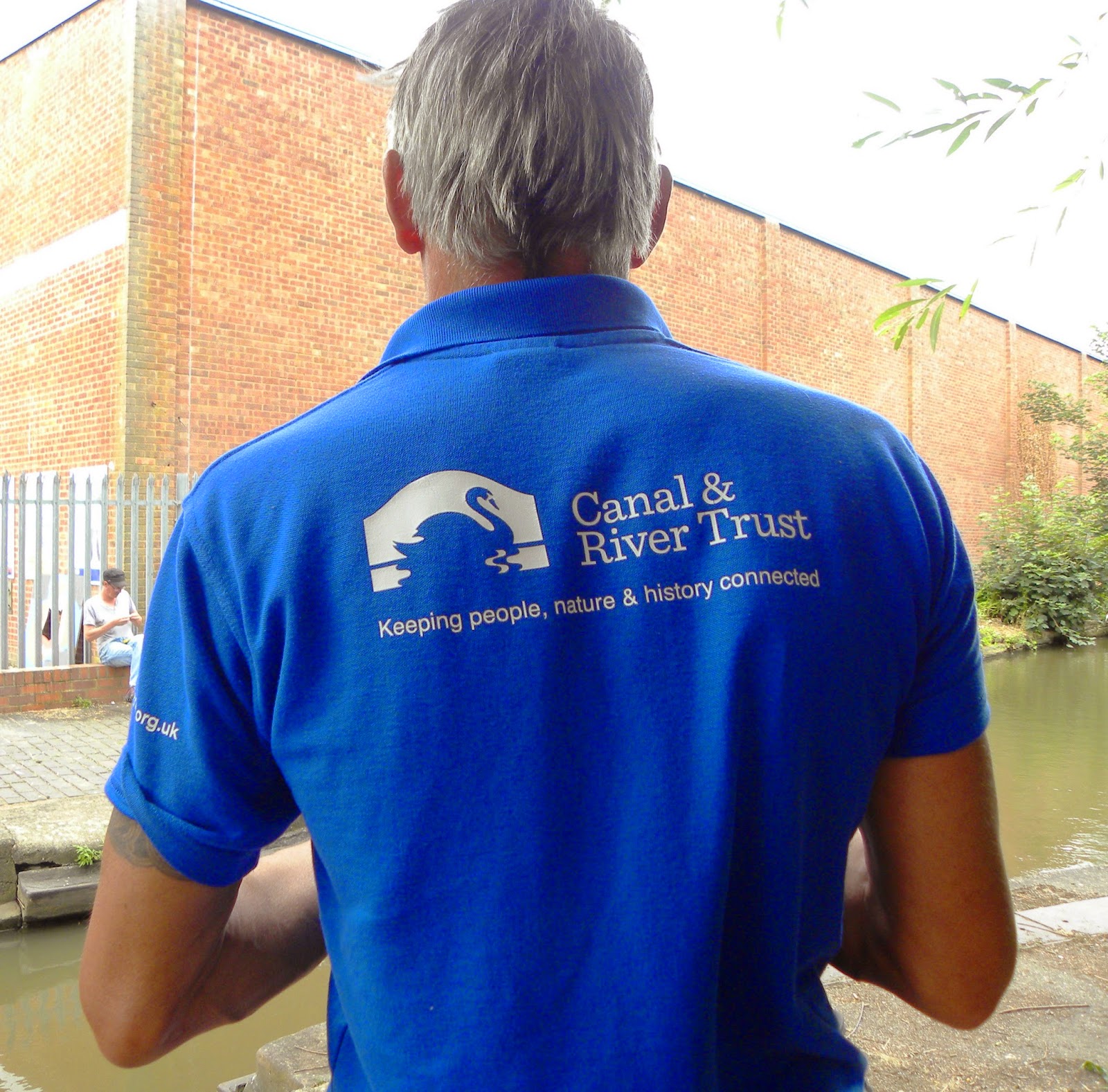 At a lock along the way, I met one of the many volunteers who help manage the waterways and locks for the Canal and River Trust. She asked where I was from and then asked why we chose to rent a canal boat. When I told her our story, she beamed, "How brilliant! I think it's just wonderful you Americans have chosen to do something so traditionally British! I'm proud of you! How absolutely wonderful!"

Everyone we met along the canals was extremely nice and helpful. Even the "gongoozlers", people who make a pastime of watching us hopeless landlubbers trying to cope with the locks, sometimes jumped in to help us move those enormous paddles.

I really didn't know what to expect. I dreamed of a relaxing ride through gorgeous scenery and quaint villages, and yes, a few locks. I, indeed, got all of that and more! Even the canal leading out from Worcester to the Severn River is beautiful; the ancient locks are tiny and the scenery spectacular! 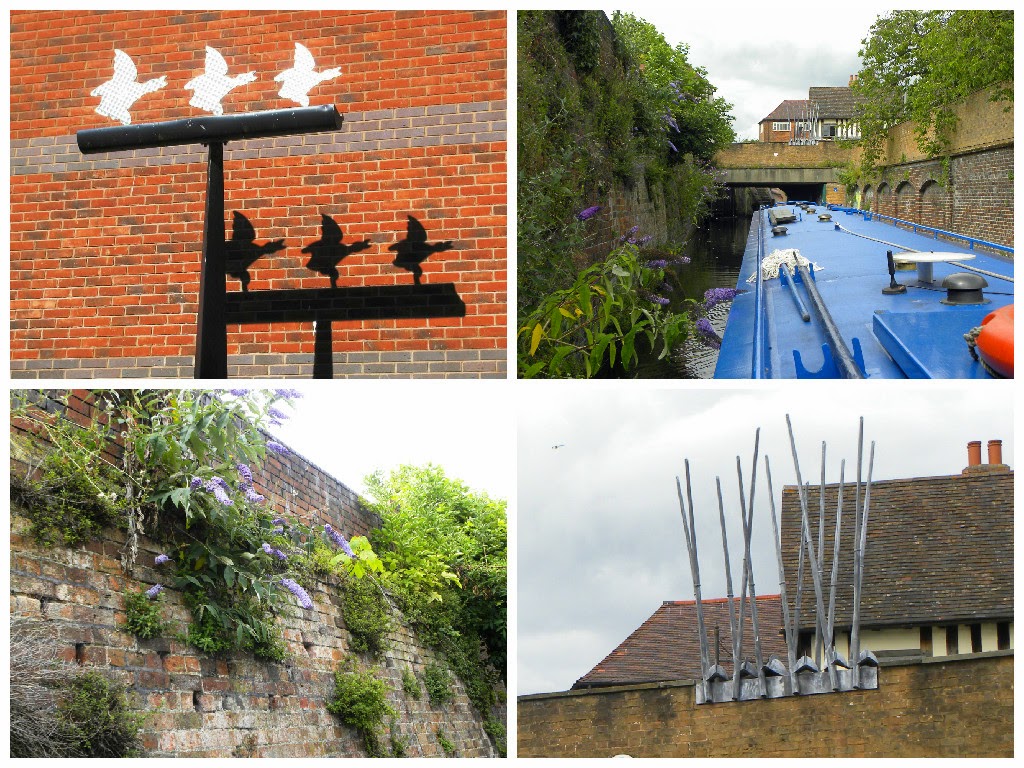 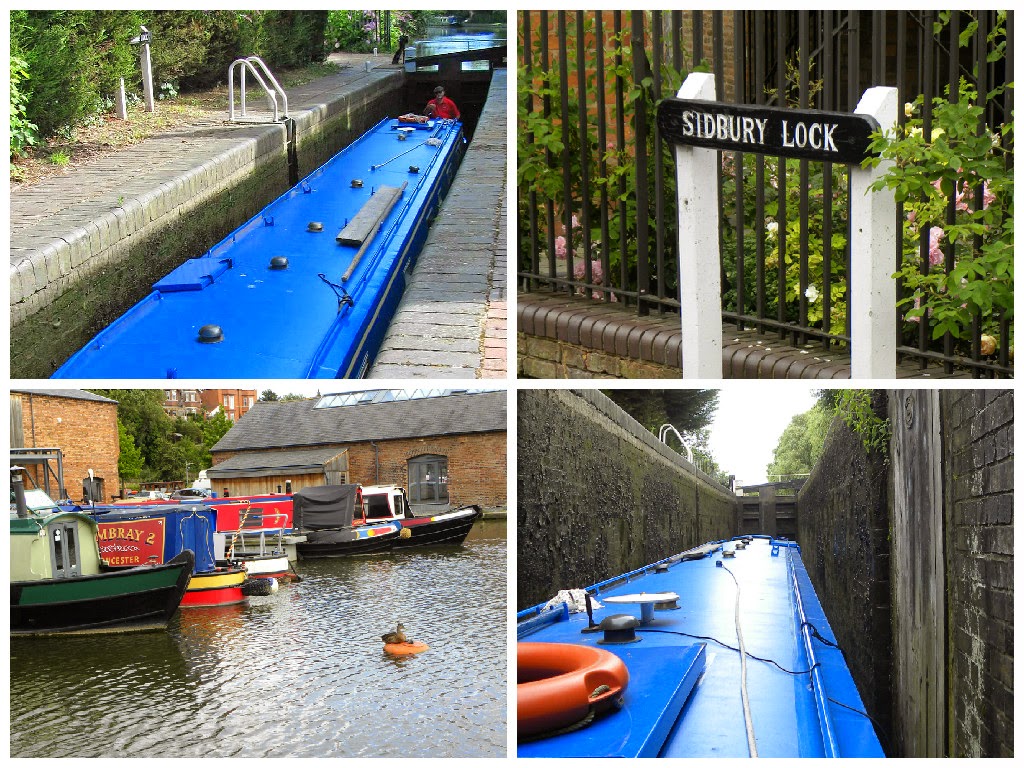 The canals of Worcester.
Captain Tom had no trouble maneuvering these tiny locks
with inches to spare on either side.

Originally, the canals were constructed to transport goods across the country.  The narrow boat, built in the 18th, 19th and 20th century, was designed to fit the confines of the canals and bridge holes, which had to be at least 7’ wide. Pulled by horses along a towpath, it was a slow and laborious process, but languid at the same time, allowing plenty of opportunity to stop at a pub along the way for a brew or two.

The canals now are primarily for recreational use, with more and more people living in their narrowboats. We met several of these folks; many are retired older couples and their pets. And they, like our RV counterparts, form a community and support group for each other. All I can say is, it’s a nice way to live! 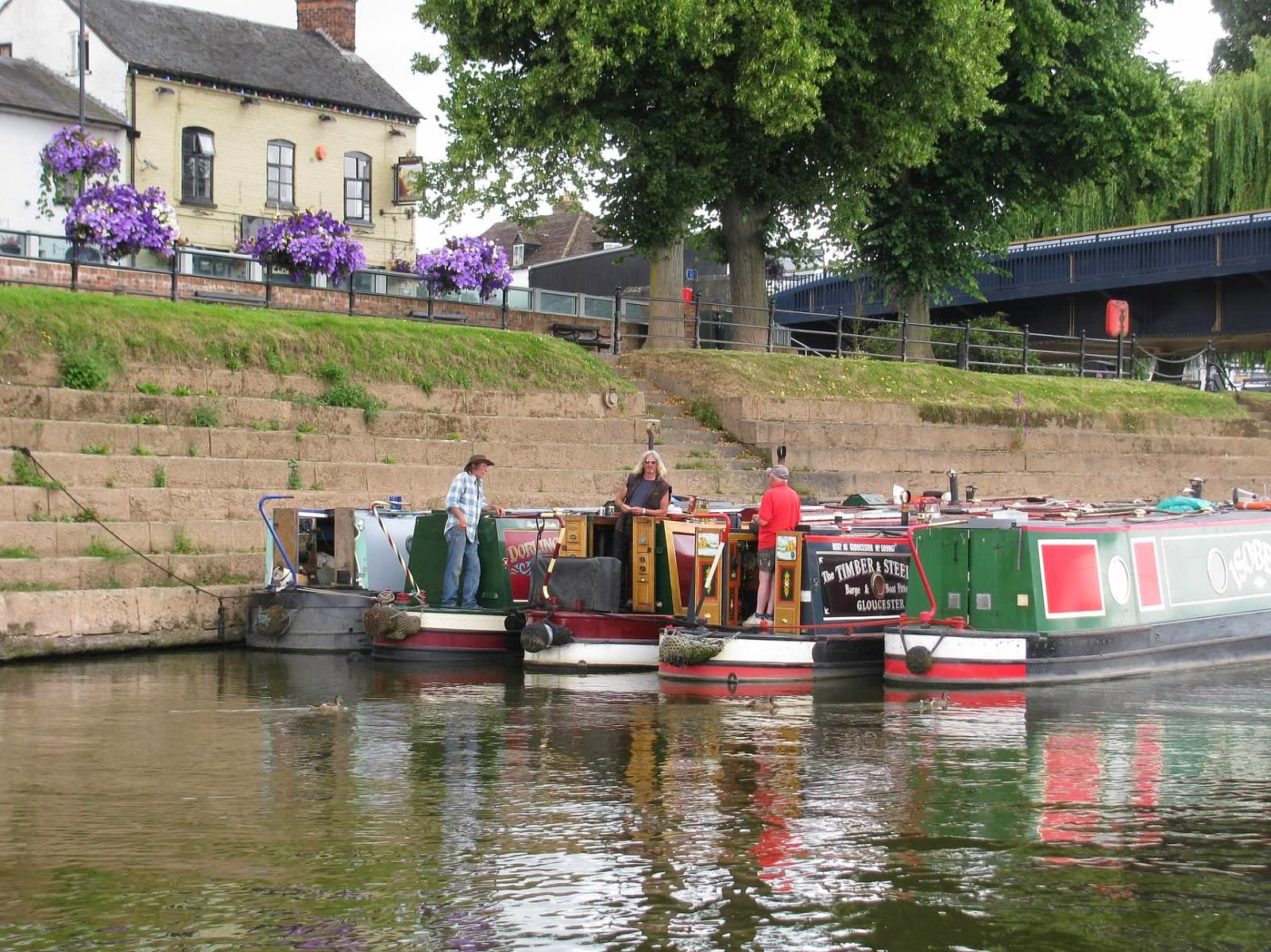 Who says you have to leave your
garden or your pets behind?
Entering the Severn River 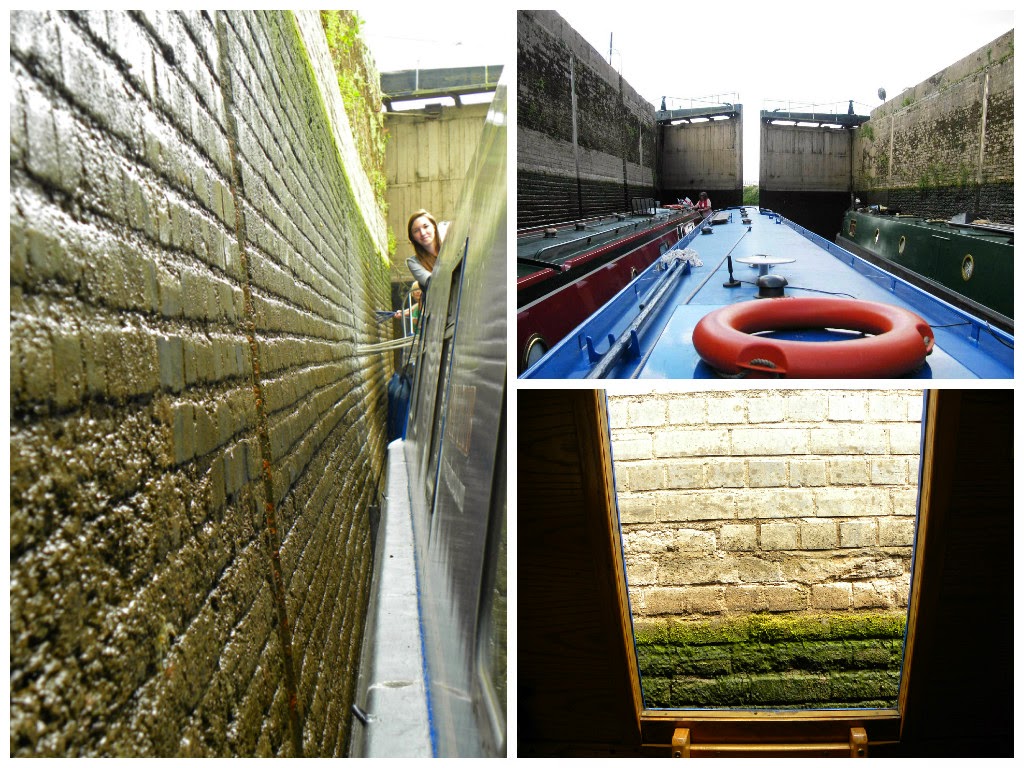 This huge lock at Diglis Basin, gateway to the Severn River, is thankfully manned
so we girls didn't have to open this one!

Sights Along the Severn River 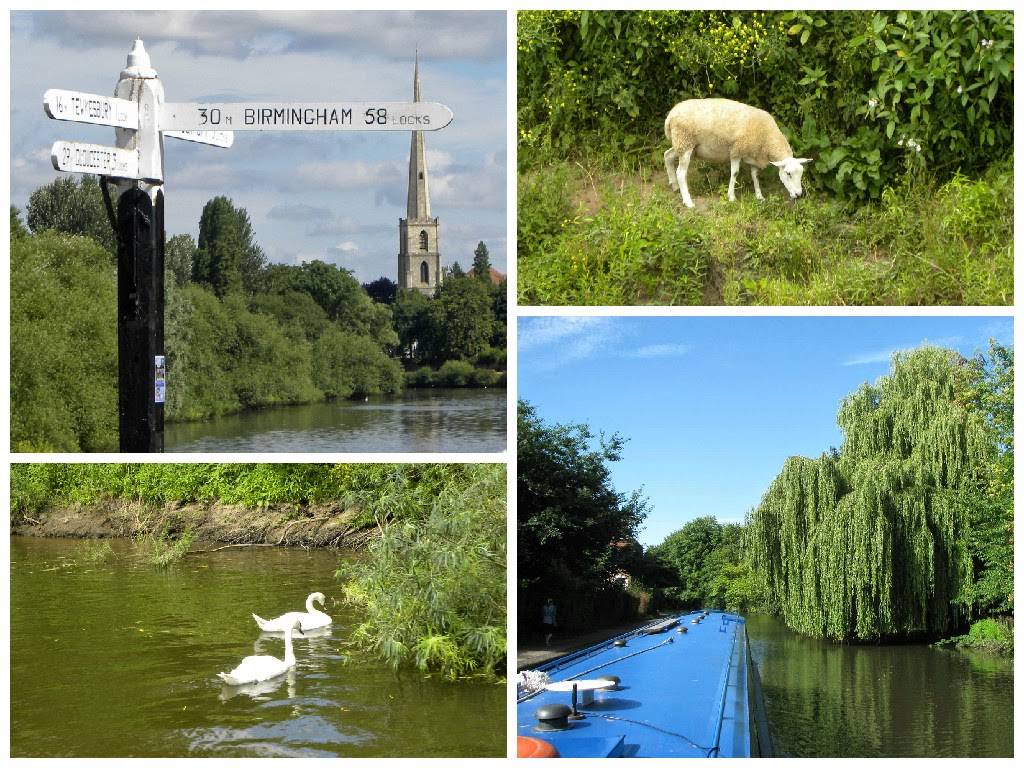 Does it get any better than this?? 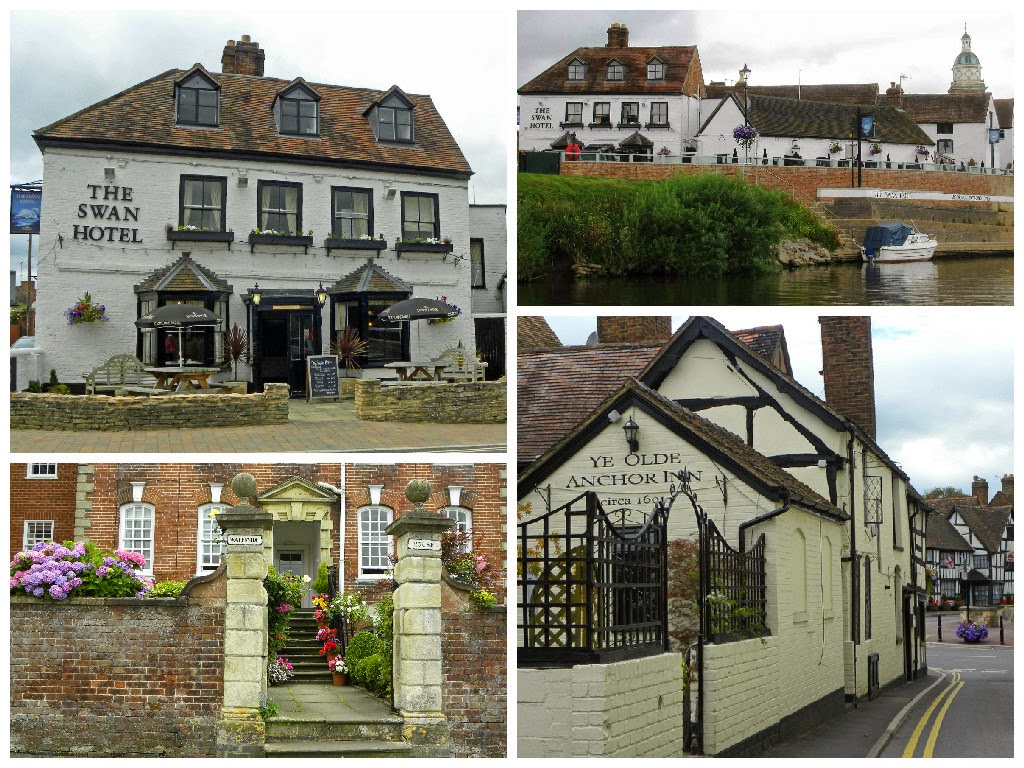 On our journey down the Severn River, we docked our boat for lunch
at The Swan Hotel. I think I had a steaming bowl of homemade soup
and crusty bread. Good pub food! 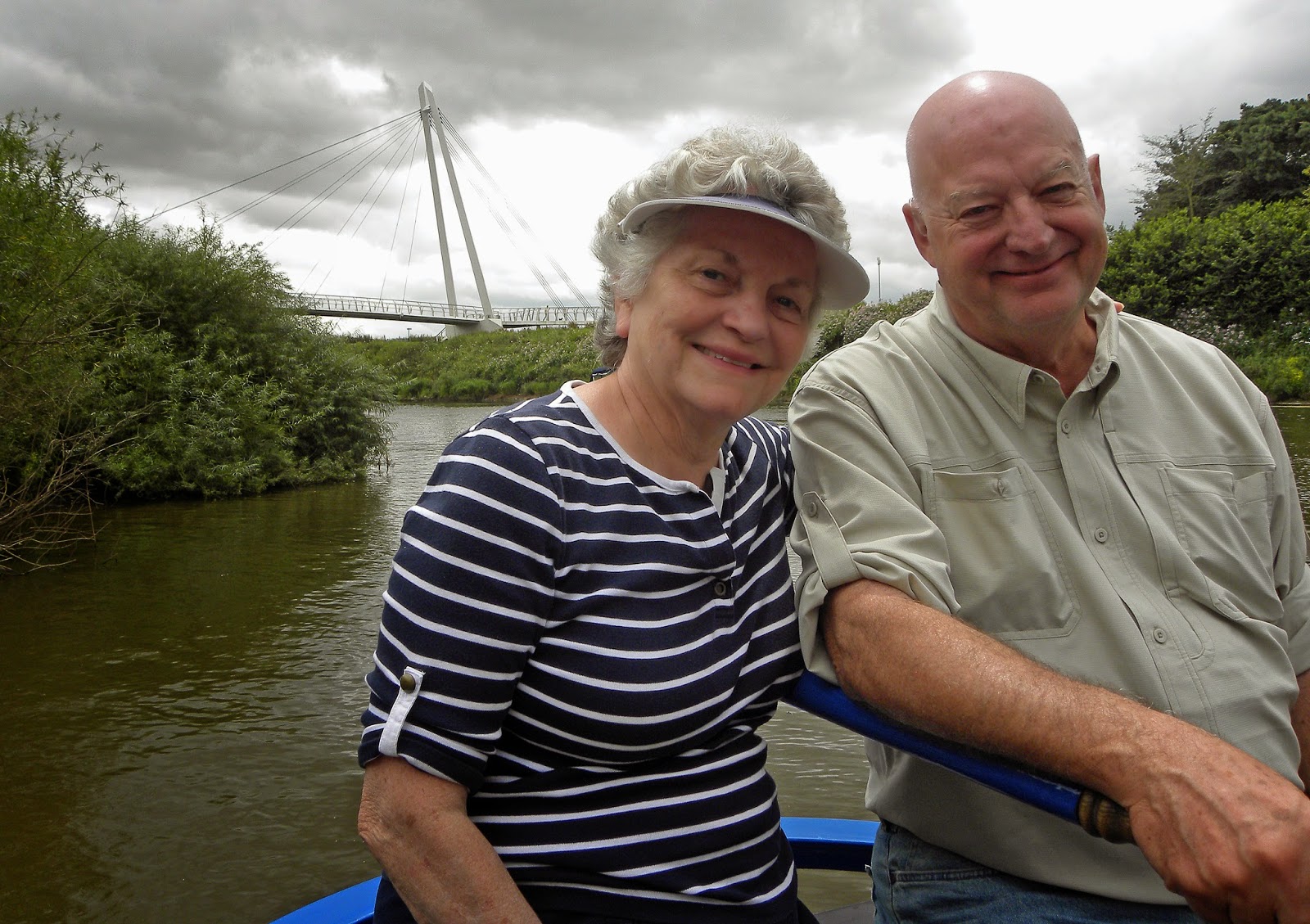 
***A special thanks to Kay and Tom for many of the photos shown in this blog!

Next time: The Many surprises of the Town of Tewksbury!
Posted by theworldaccordingtobarbara.com at 3:29 PM