Monument Valley encompasses parts of Utah, Arizona and Colorado
Featuring plateaus (long and flat), buttes (a shorter version shown on the
right) and mesas (tall and flat shown left in front of the plateau.)

Looking across the dusty plains of Monument Valley you expect to see John Wayne astride a galloping steed wearing his high Stetson hat being chased by fierce Indian braves. If that image comes to mind, it’s probably because you've probably seen several movies with him doing just that. But as beautiful as the place is, how did this remote, arid Navajo land ever become the quintessential movie set? Well, it all started with a man and a dream, Harry Goulding.

Tall and lanky, his sinewy frame baked in the hot desert sun, Harry sat astride his horse and looked out over the soaring mesas and flat plateaus and knew he’d found a new home. On that fateful day in 1921, it never occurred to him he would be instrumental in also making it a famous stage for Hollywood movies.  He and his wife, “Mike”, were just looking for a place to settle down and start a new business. They purchased one square mile of this land from the State of Utah and set up a trading post, and for the next seven years traded with the local Navajo people out of  a 10’ by 12’ tent. 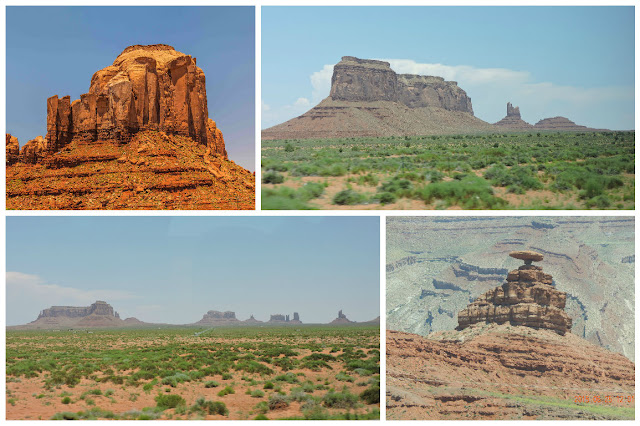 A millennium of sea creatures laid down their lives to be carved by the hand of nature
into limitless, fascinating shapes forever shifting, changing and forever
delighting the senses. 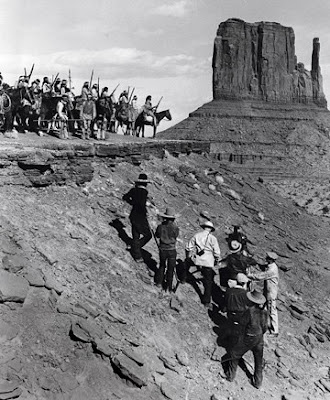 They managed to do all right in this ideal setting until the depression hit and hit hard. His Navajo friends were suffering and dying of starvation and Harry and Mike’s own existence on the land was in jeopardy. Out of desperation, Harry reached out to Josef Muench, a noted photographer of the area and asked him to enlarge several of his best pictures. He and Mike then packed up their “bedrolls” and set out for Hollywood looking to enlist the help of Mike’s brother, a Hollywood stunt man. Doubtfully, the brother pointed Harry toward United Artist Studios, and once there, Harry threatened to camp out on their doorstep until someone talked to him. Long story short, he quickly attracted the attention of director John Ford with the photos and the rest is history.

John Ford ended up making 25 movies in the Valley, utilizing the local Navajos as extras and using Harry and Mike’s Trading Post as headquarters. Harry had not only saved his land and business, but his friends the Navajo and literately put Monument Valley on the map. (photo is from a day of filming "Stagecoach" (1939) starring John Wayne). Courtesy of Google Images. 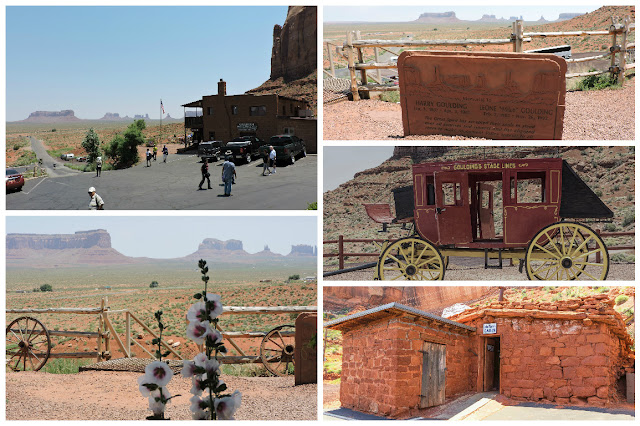 Anybody ever hear of Kanab??

Goulding's Trading Post wasn't the only place that movie makers discovered in Monument Valley. Kanab, Utah  also attracted the talents of big name directors and actors. A total of 71 westerns, 15 non-westerns and 14 TV shows were all filmed in or around Kanab, Utah. Who would have thought?

We stopped for lunch in itty bitty Kanab on our way through Monument Valley. Although there wasn't any evidence of the ghosts of film greatness past that I could discern, we did spend a few minutes at a place called Little Hollywood. The front building housed a modest museum and gift shop, but the fun was in the back. Someone did a fair job of assembling a collection of  set pieces from various western movies and TV shows. I brought "Sean and Morris" (the stars of a new children's book I'm writing for my granddaughter) and with the help of Ken, our driver, as my Cecil B. DeMille, filmed our own western movie. 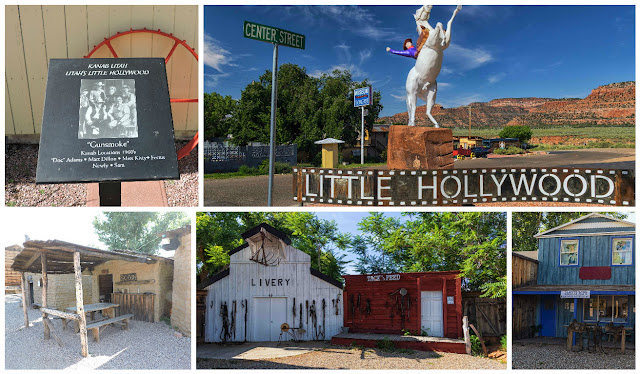 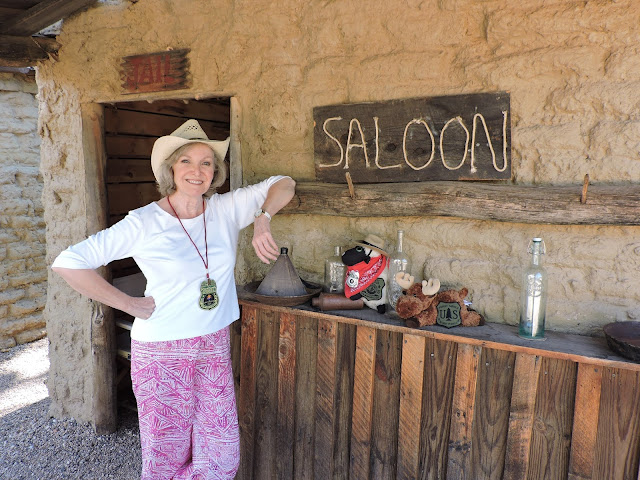 Ken, our wonderful bus driver, is a former Forest Ranger. He deputized
Sean "The Sheep", Morris "The Moose"
and I just before we landed in a jail cell in the saloon! 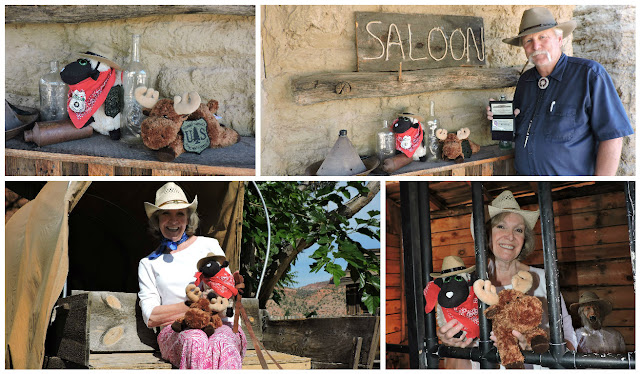 Ken deputizing Sean and Morris into the Forest Service up top.
The "boys" and I rotting in jail and later high tailing it out 'o town on the stage. 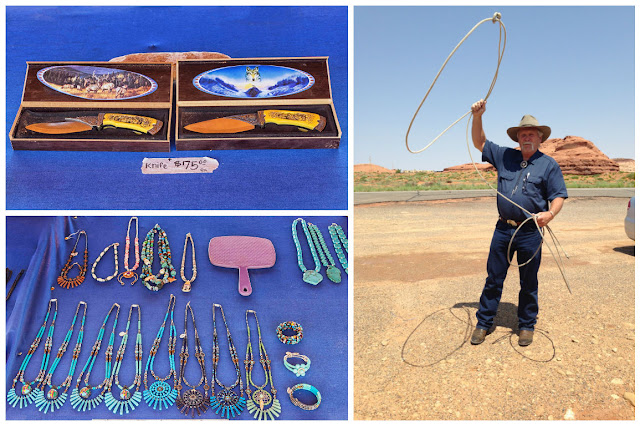 Back on the bus, we settled down for the long drive into Colorado to see the next site on our list, the famous Mesa Verde Indian cliff dwellings. However, before leaving the stunning Monument Valley, we stopped by a road side stand to admire and buy these beautiful handmade jewelry pieces from the Navajo. I bought a lovely turquoise pendant for a fraction of what a store would charge. Besides, it felt good to support the Navajo community directly.

Driving through this land, one can't help but connect not only with it but with its first inhabitants, the native Indians. It becomes painfully apparent how much has been taken away and so little given in return. Many Indian families and communities lack even the basic necessities of life, like water. When the tour was over, I heard of an organization that is committed to digging wells for the Navajo in Arizona. It costs around $500,000 to dig one well. If you would like to help, the name of the program is Deep Water Project headed by George McGraw. You can find out more by logging onto DigDeep.org and see how you can be part. Thank you!

Thanks go to Eric and Larry for use of some of their wonderful pictures. Thanks, Guys!!

Posted by theworldaccordingtobarbara.com at 12:03 PM No comments: