CONCORD, MASSACHUSETTS: THE PLACE THAT SHAPED A NATION

After spending a wonderful few days on the islands of New England, I drove back to Boston where I stayed with Pat and Bill, friends I made on the “England, Scotland and Wales” tour in 2012. I couldn’t have asked for more gracious hosts. They not only invited me into their beautiful home, but took great care to show me many historic places that are practically in their backyard! I walked around Thoreau’s Walden Pond, visited Louisa May Alcott’s home, ate lunch at the oldest working inn in America (Longfellow's Wayside Inn), and stood on the very spot where the Revolutionary War began. 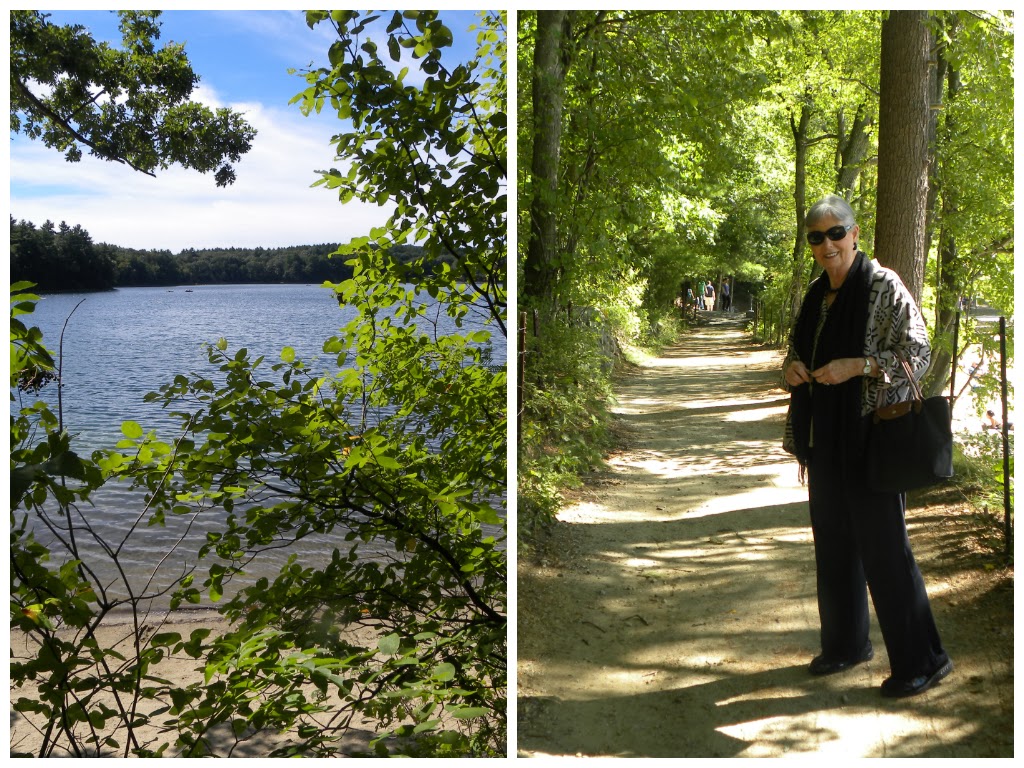 
Being a girl raised in the west, early American history has always been merely words in a book. It’s only when I see these places of great significance to our heritage do they become real to me. In seeing them, only then do they become profoundly meaningful in a way that is hard to describe. I sometimes feel like Dorothy in “The Wizard of Oz” waking up into a whole new reality. Take for instance the first place Pat took me to visit:  Louisa May Alcott’s home in Concord.

Most everyone knows that the Revolutionary War started on the fields of Concord, which forever changed our nation’s course. However, I didn’t realize it also was the hotbed of intellectual thought, which in turn changed our nation’s philosophy. Surprisingly, one of the most unlikely spots for that to happen was in Louisa May Alcott’s childhood home, located right in the heart of Concord. Louisa, as you may recall, wrote Little Women, a favorite childhood story about growing up in her “orchard house” along with her three sisters, mother and often absent father. And, it is the father, Amos Bronson Alcott who surprised me.


Louisa’s father, Amos Alcott, a respected social and educational reformer was a staunch proponent of Transcendentalism as were his friends and neighbors: Emerson, a philosopher, Thoreau, a naturalist and rebel, and Hawthorne, a novelist. From 1834 to 1888, these four leading intellectuals called Concord home. If you are anything like me, I’ll bet you thought Transcendentalism came over with the Beatles and the Maharishi in the 60’s. What the heck IS Transcendentalism, I thought as I roamed from room to room in the Alcott’s home.

It seems it all started with Emerson’s Essay on Nature in 1836, which simply stated that “…people, men and women equally, have knowledge about themselves and the world around them that “transcends” or goes beyond what they can see, hear, taste, touch or feel. This knowledge comes through intuition and imagination not through logic or the senses. People can trust themselves to be their own authority on what is right.” I’ll bet that went over big with the local churches!  ushistory.org 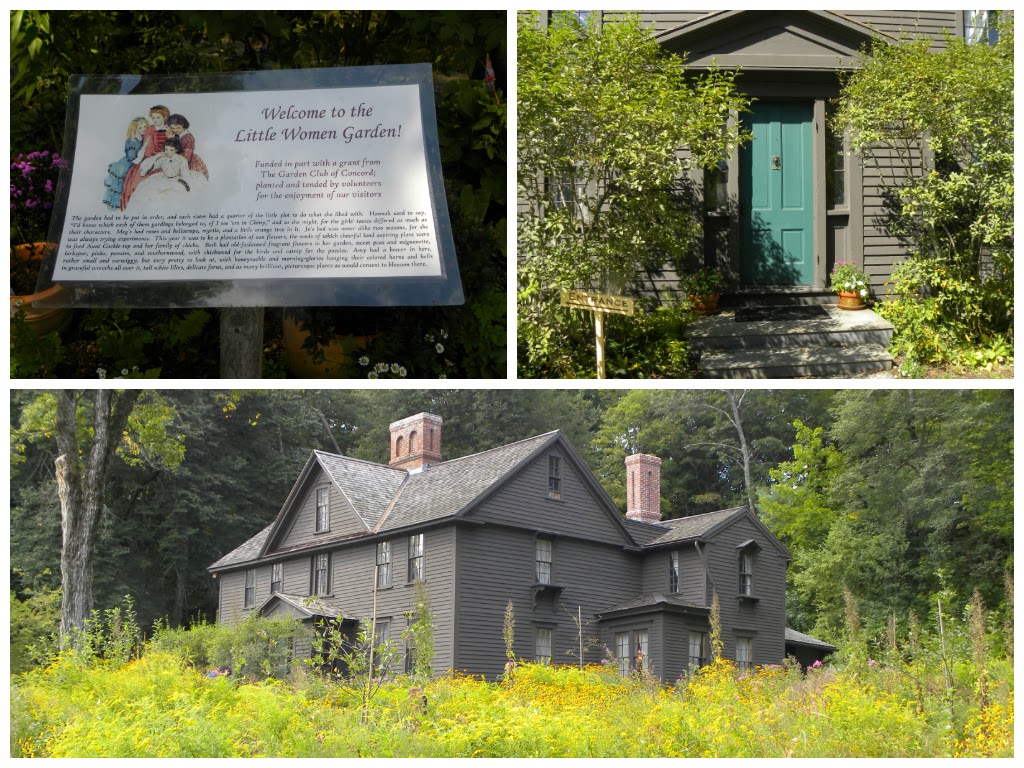 Louisa May Alcott's home. She wrote Little Women at the age of 26 in her bedroom on the second floor.

Although money was always short in the Alcott home, it had to have been a wonderful place to grow up. Mr. Alcott believed in the equality of women and the freedom of the human spirit to achieve in an encouraging atmosphere. As examples of his educational philosophy, he famously encouraged a student to take a ruler to his own hand when he made a mistake, and allowed the baby in the family, May, to draw all over the walls of the house because they couldn’t afford to buy paper. What a great dad! 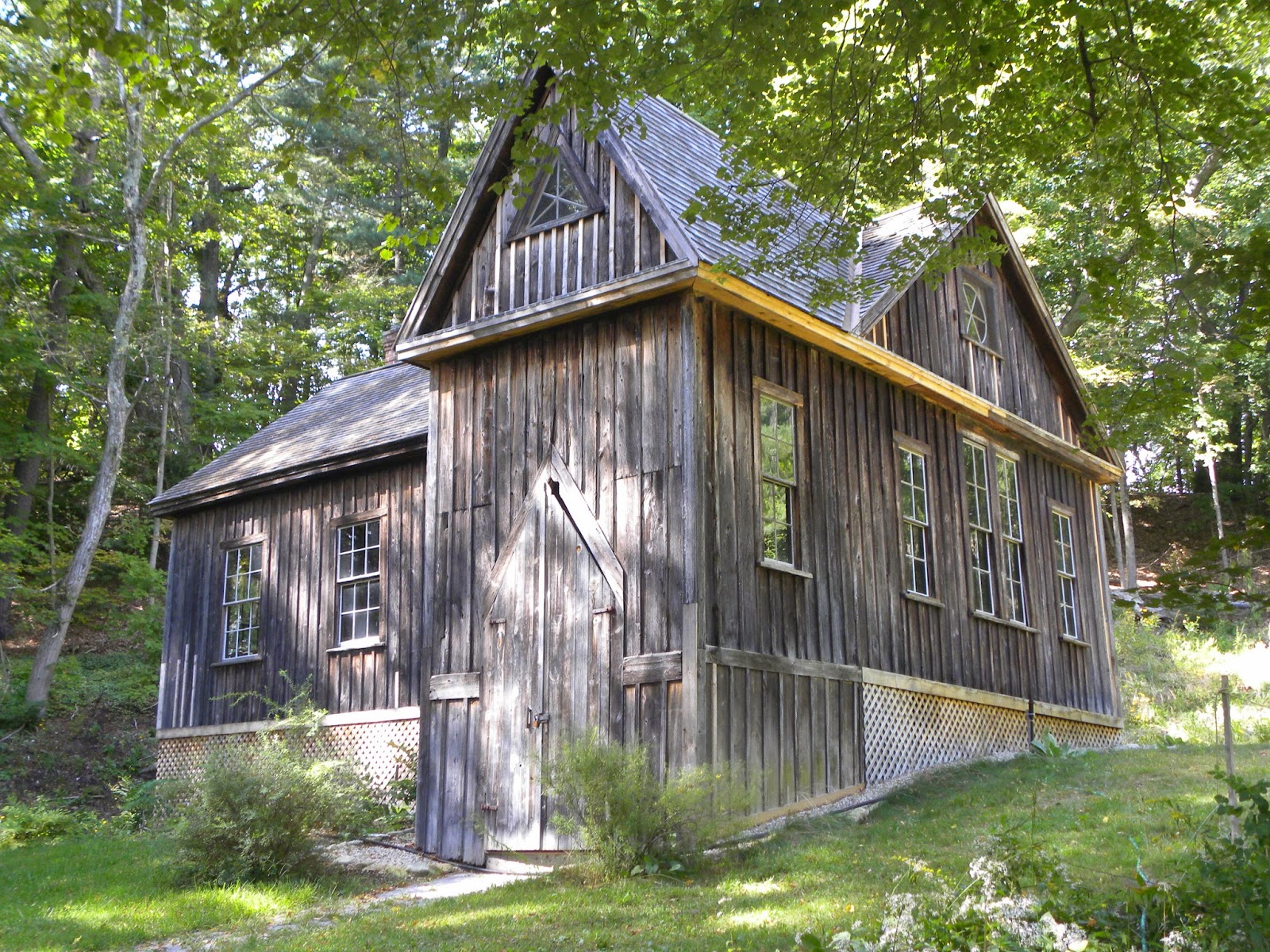 Amos Bronson Alcott's school house next to his home.

Leaving the Alcott’s home, Pat and I drove to nearby Sudbury and enjoyed lunch at Longfellow’s Wayside Inn, the oldest continuously working inn in America. Built by David Howe in 1716 as a “hous of entertainment”, it sits beside the old Boston Post Road, one of the first mail routes in the country. Henry Wadsworth Longfellow visited Howe’s Tavern in 1862 and was so taken by the place he wrote a series of poems called “Tales of a Wayside Inn”, one of which “The Landlord’s Tale” (more widely known as “The Midnight Ride of Paul Revere”) made the place famous. The Inn was renamed in Longfellow’s honor in 1892. Longfellow's Wayside Inn. 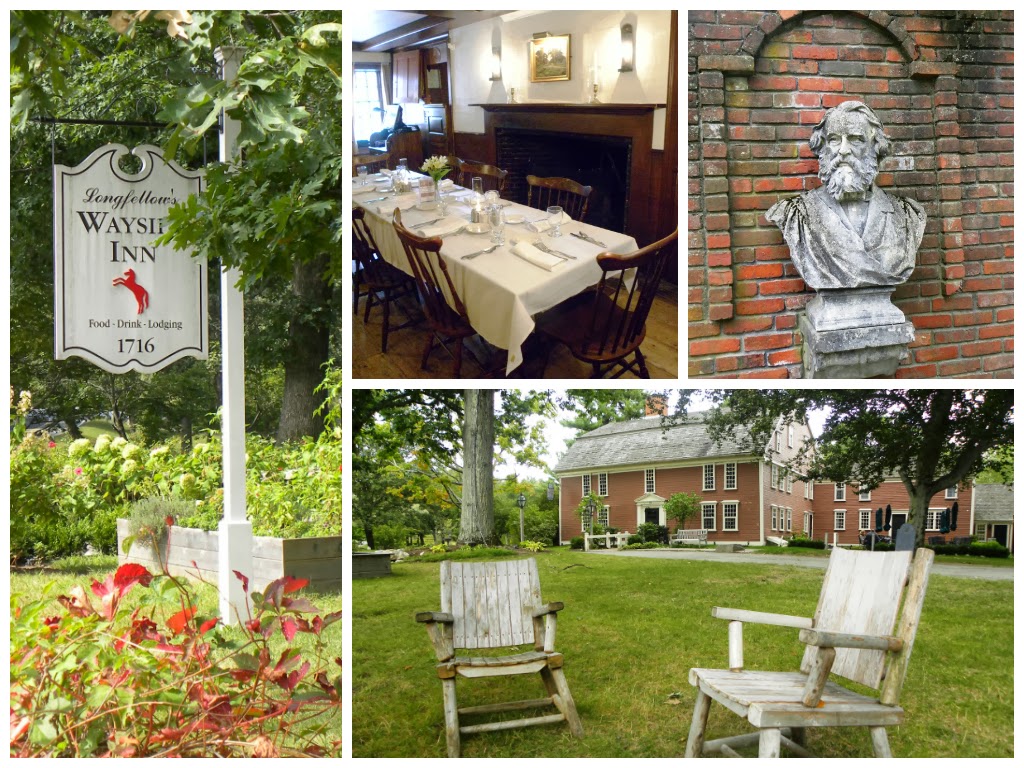 Henry Ford bought the Wayside Inn in 1923 with the intention of creating a living museum of Americana. He added buildings to the property including the one-room Redstone School (relocated onto the property in 1925), a fully functioning Grist Mill (built in 1929), and the Martha-Mary Chapel. Read more. 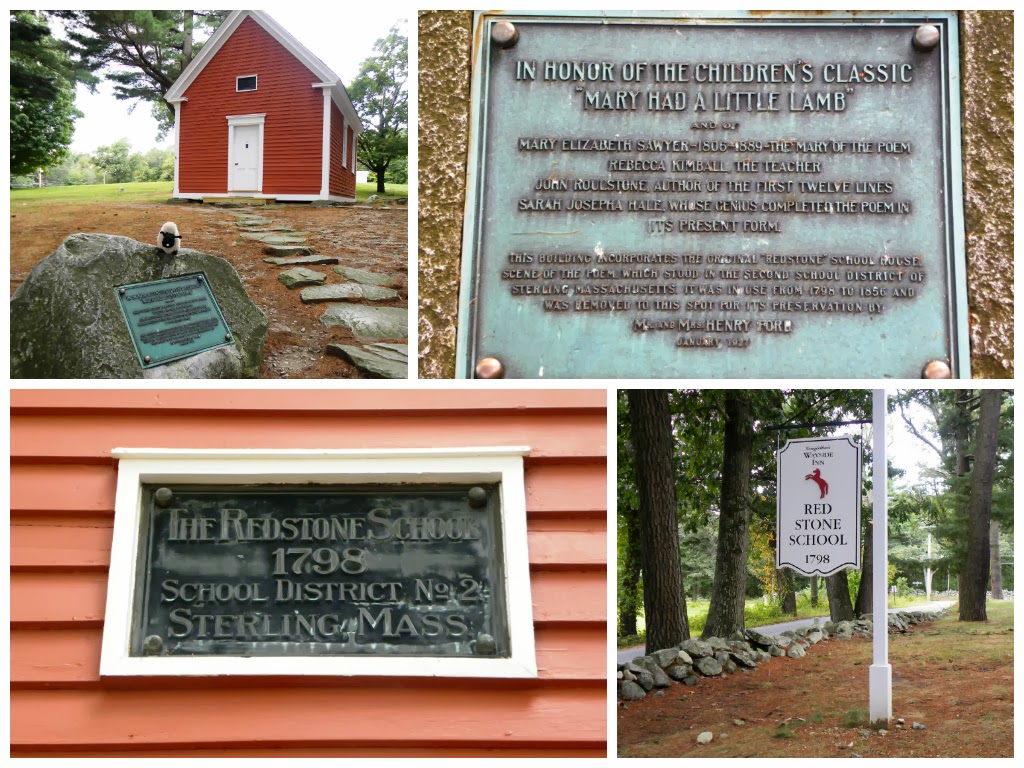 Redstone School House, 1798. Scene for the famous poem "Mary Had a Little Lamb". (For those of you who remember Sean, he volunteered to pose as the "lamb".) 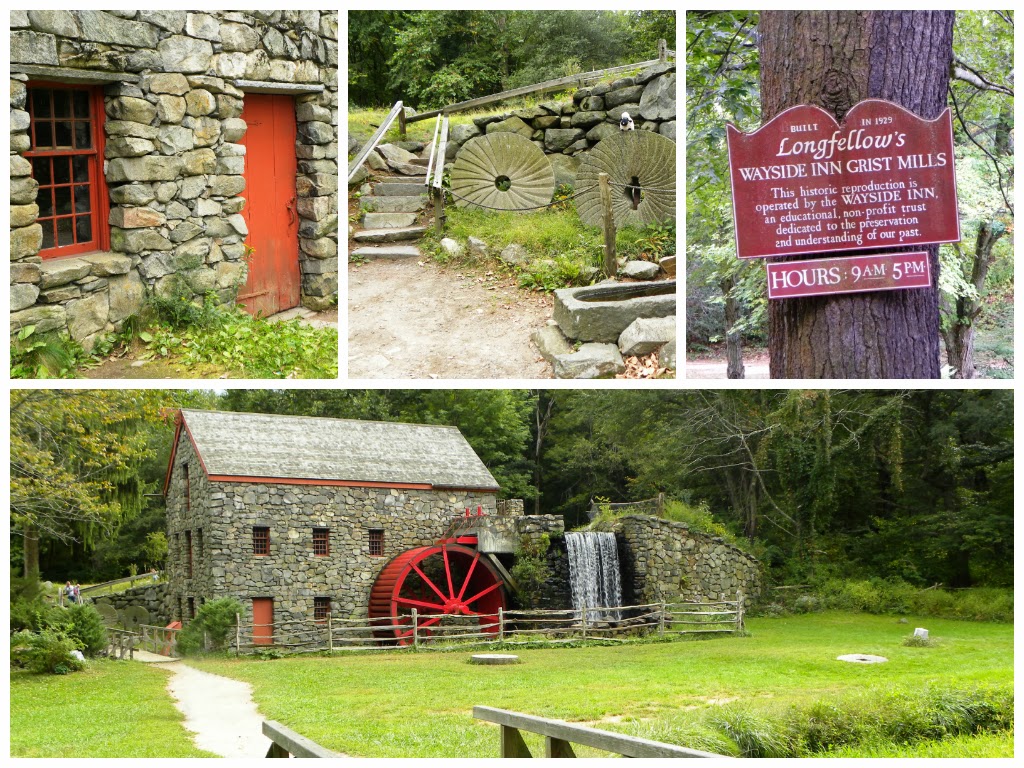 Grist mill, 1929. Built by Henry Ford as part of a park dedicated to Americana. 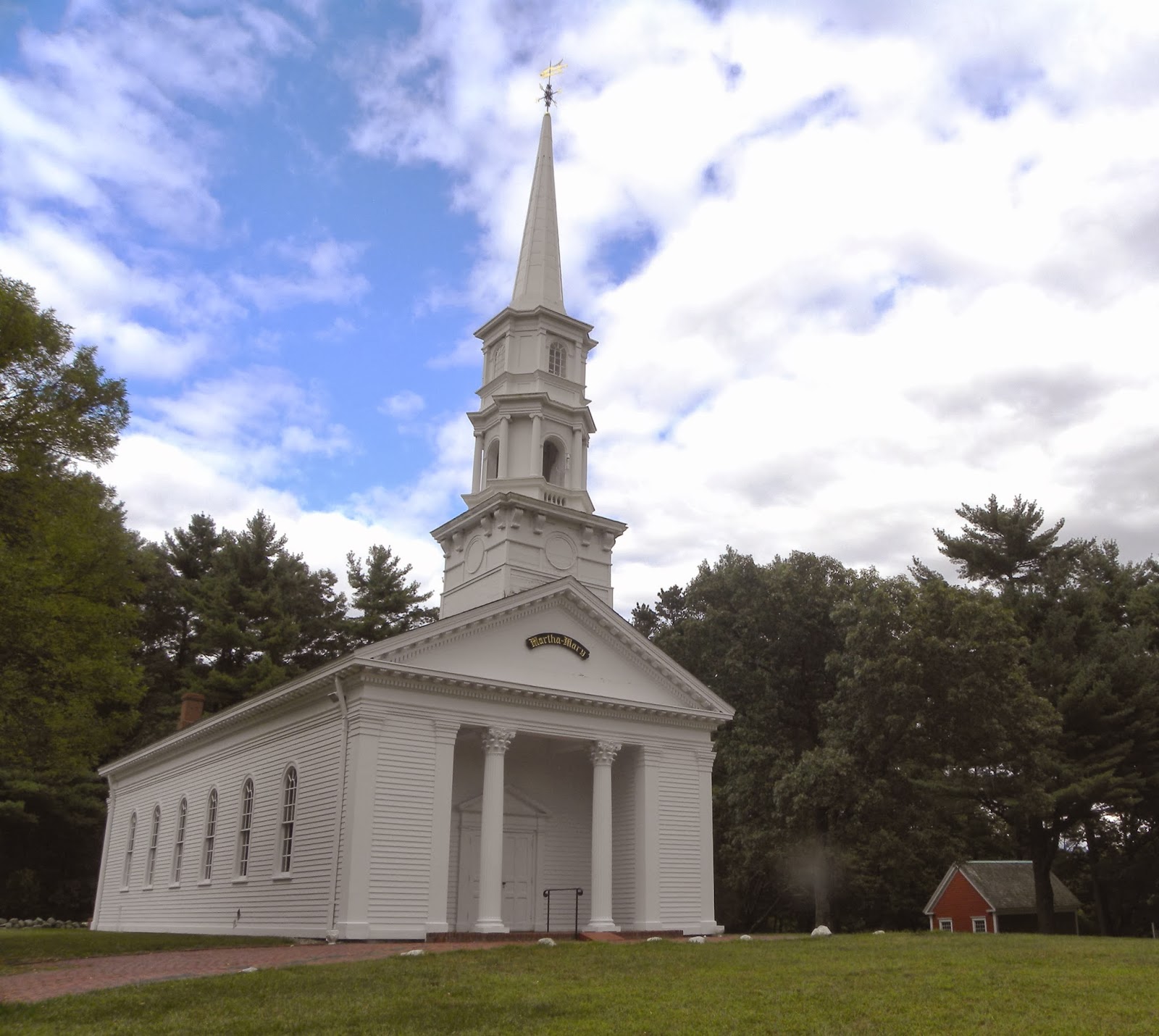 Martha-Mary Chapel next to the Little Red Schoolhouse.

Old North Bridge and the "shot heard 'round the world"


After a deliciously authentic lunch of chicken pot pie, Pat and I drove a short distance to see the Old North Bridge on Battle Road. It was here that one of the successive owners of Howe’s Tavern, Ezekiel Howe an officer in the colonial army, led the Sudbury Minute Men into battle with the British that started the Revolutionary War. Starting at dawn on April 19, 1775, they fought the Red Coats all day long eventually forcing them the entire way into Boston. There they claimed victory in Charlestown at the Battle of Bunker Hill.

The battle that forever altered our destiny took place at the Old North Bridge and where the famous “shot heard ‘round the world” was fired (a line from Emerson’s poem, Concord Hymn). The British, defending the bridge, shot first at the approaching militiamen but retreated when the colonists returned fire. 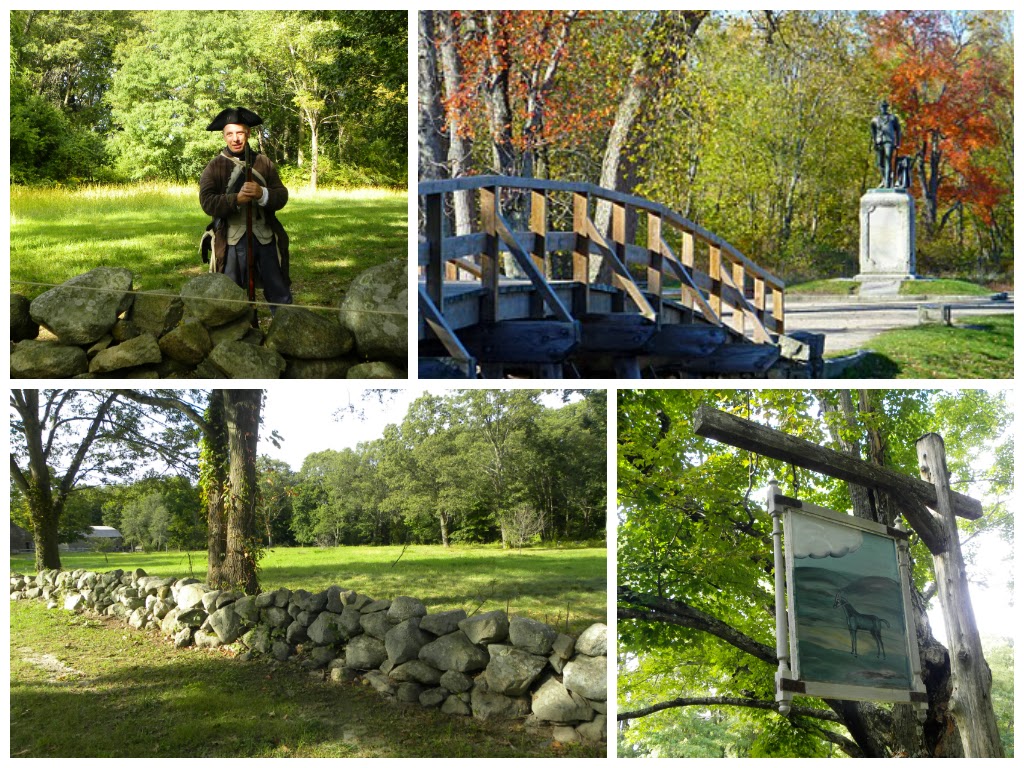 Old North Bridge, site of the "shot heard 'round the world" and the start of the Revolutionary War in 1775.
The Minutemen Statue commemorates the date.

As I looked around at the peaceful fields and hand stacked rock fences, I could just make out the distant sounds of gunfire and shouts of the soldiers on the quiet breeze rustling through the trees. To think that such a momentous occurrence took place in a lovely bucolic landscape is hard to imagine, but at the same time, I felt the spirits of those brave men who had the courage to stand up for what they believed in and my heart gave thanks for a country where I can live in freedom. 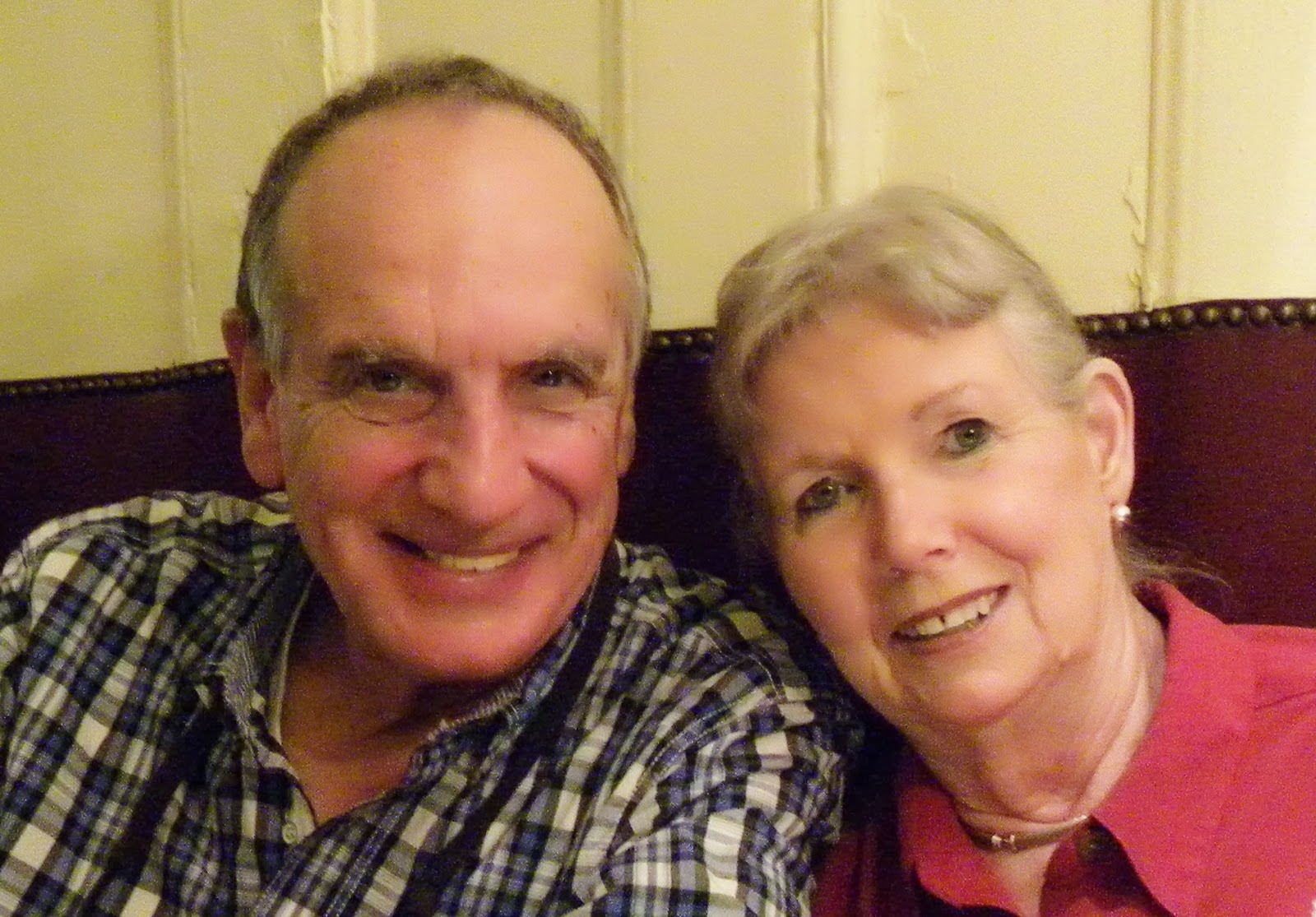 Thanks a million, Bill and Pat!

Good reading:  “The Concord Quartet: Alcott, Emerson, Hawthorne, Thoreau and the Friendship That Freed the American Mind” by Samuel A. Schreiner Jr.


Next time: Mount Vernon and the Hunt for George’s Teeth!

Posted by theworldaccordingtobarbara.com at 3:50 PM No comments: