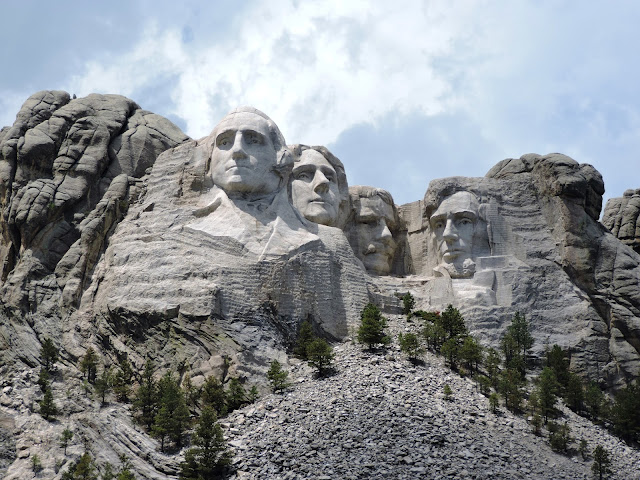 Fast and furious, exhilarating and unforgettable best describes my recent trek through America’s Western National Parks! It was a trip for the senses: from river rafting against a backdrop of the soaring snow-clad peaks of the Grand Tetons, to gushing waterfalls throwing rainbows, to the verdant plains of Wyoming and its grazing herds of buffalo, I was overwhelmed by the sheer rugged beauty of it all.

I’ve lived in the west all my life and still hadn’t seen many of its national parks. I’d always wanted to see places like Yellowstone, Bryce, Zion, Monument Valley, Grand Canyon and Mesa Verde, but somehow never had the chance. The time was right, I decided, when I received a brochure from Grand Circle Tours offering just these sights on their itinerary.  I couldn’t give them my money fast enough! The brochure described how in 18 days I would travel 3,000 miles and see 6 major western parks. It told me that along the way I would experience a “thrilling river rafting excursion on the Snake River”, and take a ride on a 127 year old steam train that huffed and puffed along the raging Animas River in Colorado. What it DIDN’T say was that the ancient engine would cover me in coal dust and leave me with a charcoal grin that went from ear to ear or that I might see buffalo, sometimes close enough to touch. Or, maybe I’d catch a glimpse of a bear, a moose or wolf. However, it did say to take my camera and pack plenty of batteries.

So I did. Prepared for a variety of weather and sometimes over 9,000 feet of altitude, my suitcase was loaded down with stuff for every contingency: long johns and rain coat for those rainy, cold days and suntan lotion, hats and short sleeves for the heat. Oh yeah, and bear and mosquito spray just in case. I felt like Pioneer Woman! Then the day finally came when I met up with 40 other eager souls, plus our tour director Timothy and our driver Ken, in Rapid City, South Dakota to begin the tour. 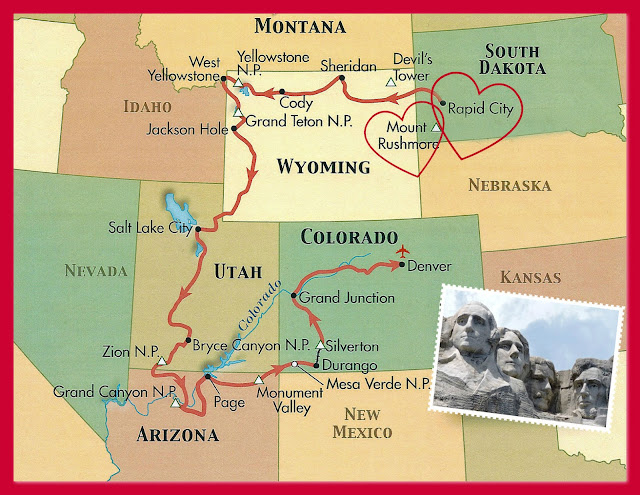 Rapid City, South Dakota, an Oasis in the Plains

I instantly liked the place. Our tiny commuter jet set down next to the equally tiny Rapid City terminal reminding me of how nice flying used to be. We landed, picked up our luggage and were on our way to our hotel in less than 10 minutes.

Located on gently rolling plains with the Black Hills in the distance, the air is pure and the atmosphere relaxed and welcoming.  Named after the turbulent water of Rapid Creek that runs through its middle, Rapid City is a laid back ranching community. The Creek is edged by a large expanse of grass and trees, creating an oasis of tranquility in the middle of town. I overheard one of our group commenting, “I could live here!” I silently agreed with her. The peace and community pride were evident everywhere. 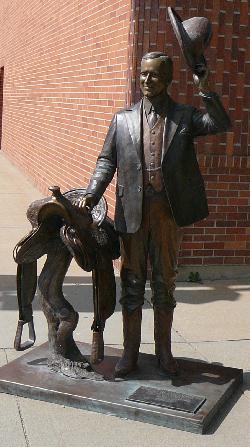 Downtown is just plain fun. The City Fathers created an avenue of Presidents (capitalizing on nearby Mt. Rushmore) with bronze statues of our past leaders on every street corner. The best is Calvin Coolidge captured for all times waving a 10 gallon hat and clutching a western saddle! The story goes that this buttoned down President’s support was needed to secure national funding to build Mt. Rushmore. So, the South Dakotans invited him to the Black Hills for some hunting and fishing and made sure he effortlessly caught a boatload of fish and bagged plenty of game. And, by gum, it worked! He went back to Washington feeling like a real South Dakota outdoors-man instead of the city slicker he really was. He persuaded Congress to appropriate $200,000 for the project and the rest is history. 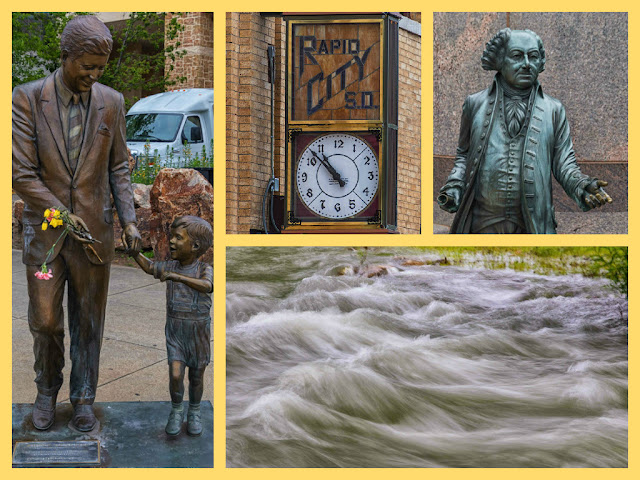 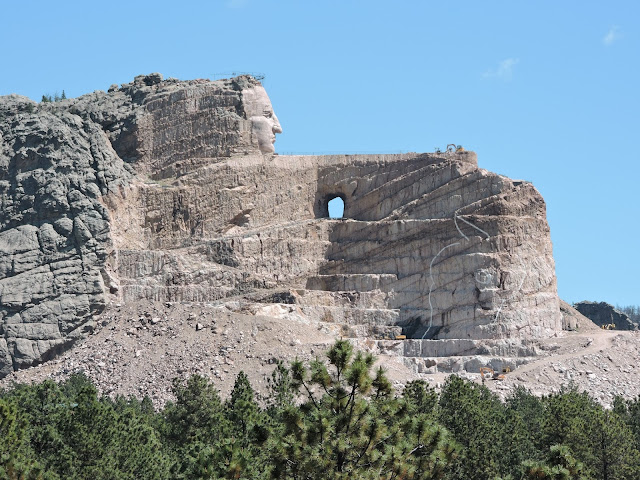 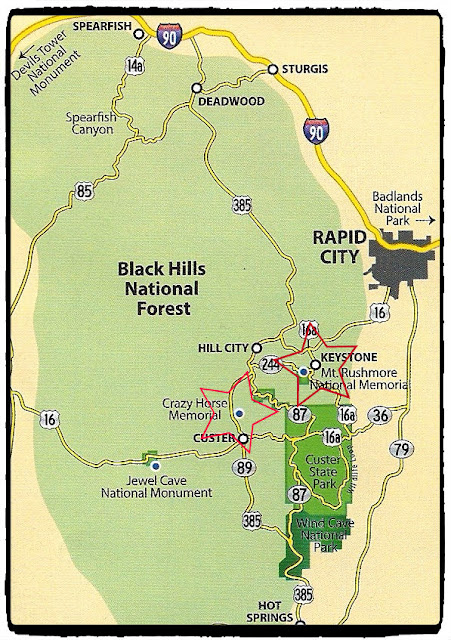 Driving into the heart of the Black Hills (so-called because the thick forest of Ponderosa Pines look black from a distance), we visit the Crazy Horse Memorial first. Filling the sky, the mountain sized face looms into view miles before we pull up to the Visitor Center. After decades of blasting and chiseling, only the massive, imposing face of Chief Crazy Horse is all that’s discernible and even that isn’t finished. Started in 1948, the sculpture of Crazy Horse was commissioned by Standing Bear, Chief of the Lakota Sioux to be built on Indian land. Sculptor Korczak Kiolkowski (jewel-CUFF-ski), not content to sculpt a modest monument like Rushmore, chose an entire mountain to depict not only the Chief but his horse as well. With raised arm and scowling face, the Chief points to the burial places of his people. The pointing finger also may well be a gesture of indictment against the white man who gave then took away his people’s land, an issue not fully resolved to this day.
(Map courtesy of Rapid City Convention and Visitor Bureau) 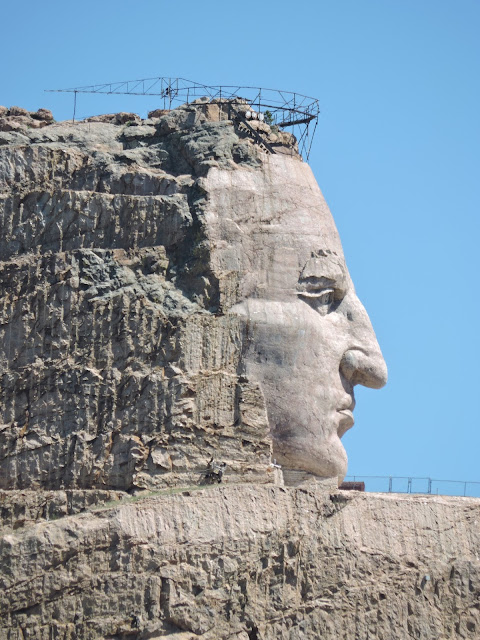 The unfinished monument makes Mount Rushmore look like a postage stamp. There is no telling when it will be finished, but the work goes on, thanks to the dedication of Kiolkowski’s ten children. (The memorial is not a part of the National Park system or any private concern, and all proceeds from the memorial go to benefit the Lakota Sioux Indians.) 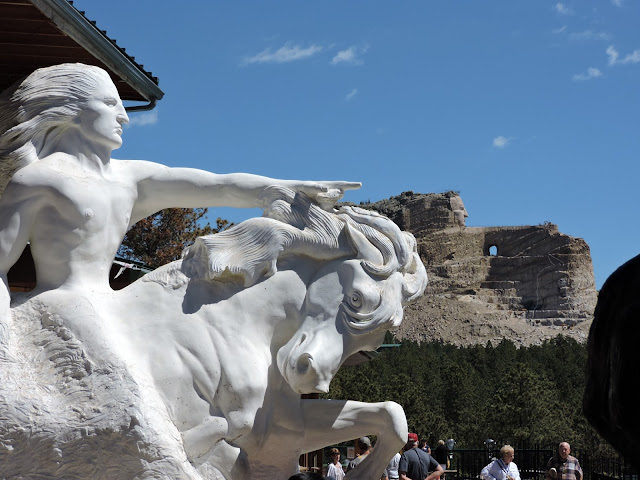 Model of the finished sculpture with the work in progress in the background.

Mt. Rushmore has to be seen to be believed. The fact that anyone would take on such a daunting project is mind-blowing. The sculptor, Gutzon Borglum, had just the ego and artistry to make it happen, and as a result, he gave the nation a permanent symbol of pride and accomplishment. Started in 1929, the monument is basically unfinished according to Borglum’s original design. The sculpture was to be carved showing the Presidents down to their waists, but WWII came along and congressional funding for the project was forever stopped. However, it is finished enough. There is a beauty and sense of rightness that the faces emerge partially completed out of the rugged granite. To many it is a symbol of our nation--unfinished and imperfect, yet grounded in the bedrock of democracy. 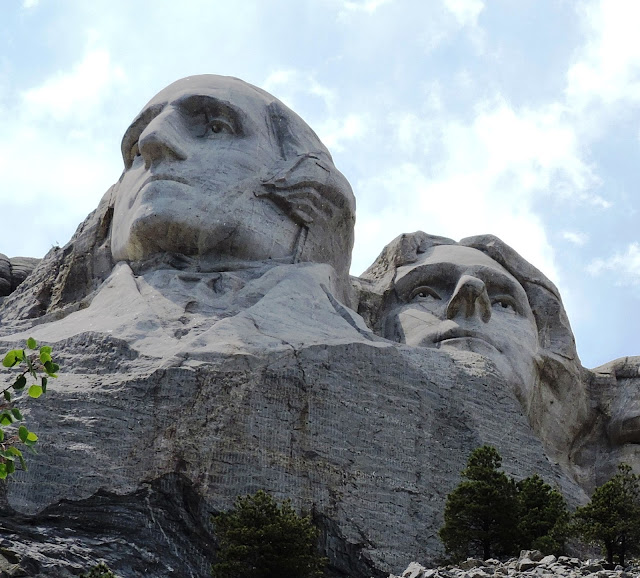 I climbed up an exhausting 256 steps to get up close and personal
with the sculpture. At this angle, I could almost count the hairs
in Jefferson's 20 foot long nose! 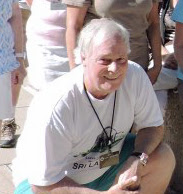 Larry Miner, a member of our tour, graciously allowed me to use many of the pictures you will see on my account of this great trip. The man is a marvel with a camera and he made my job so much easier. Thanks a million, Larry!

Next Time: Devil's Tower
Posted by theworldaccordingtobarbara.com at 1:50 PM