YORK, THE QUEEN OF CITIES

If London is Britain’s King of Cities, then York is its lighthearted Queen—elegant, sophisticated, rooted in tradition yet welcoming, playful and vibrant; it’s a place you wouldn’t mind hanging out in for awhile. 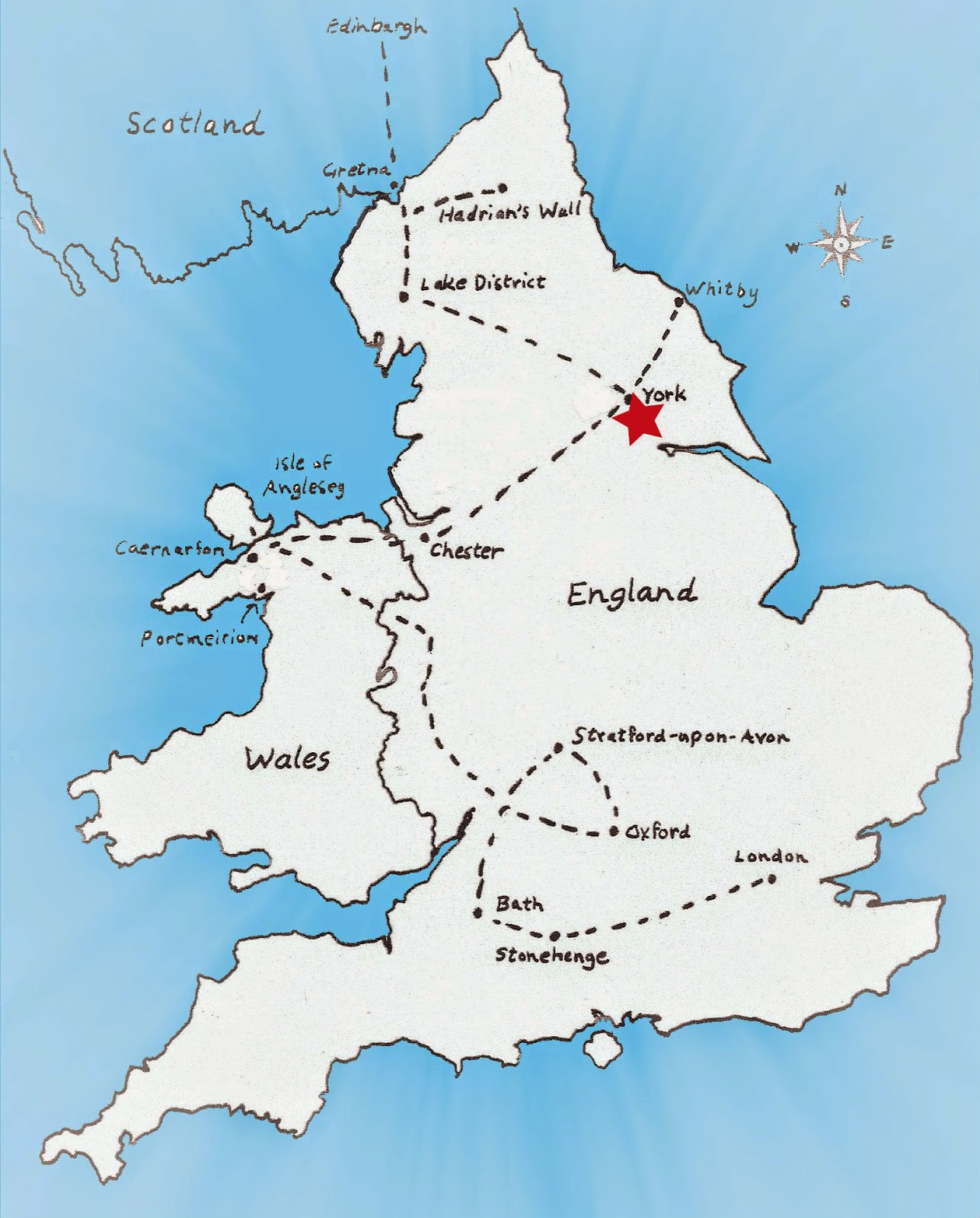 Our big silver bus rumbled out of Chester and turned north east toward our next stop, York.We had left a hot and muggy London just a few days ago but as our circuitous journey across the lower half of England continued, the weather turned cooler and it began to rain. Anita, our gregarious English guide, true to her character and position had kept us entertained on these long road trips by mixing a fine blend of history and local gossip (ex: tabloid pictures of Prince Harry in his birthday suit in Las Vegas) with samples of quintessential English food and drink to wash it down with. Along the way she’s served us a variety of English candies she called “sweeties”, blood pudding, creamy cheddar cheese from the village of Cheddar in south west England, some meat paste that tasted suspiciously like animal parts that even my mother would have thrown out and she could eat anything, single malt Scotch whisky, and a favorite around King Arthur’s round table, mead (wine made with honey).

While Anita chatted pleasantly on the rain had increased and by the time we entered the suburbs of York, the streets had turned into iridescent ribbons leading us into the heart of the city. And what suburbs they were! Row after row of proper English manors festooned with hydrangeas the size of dinner plates sat regally on large expanses of immaculately groomed lawns. 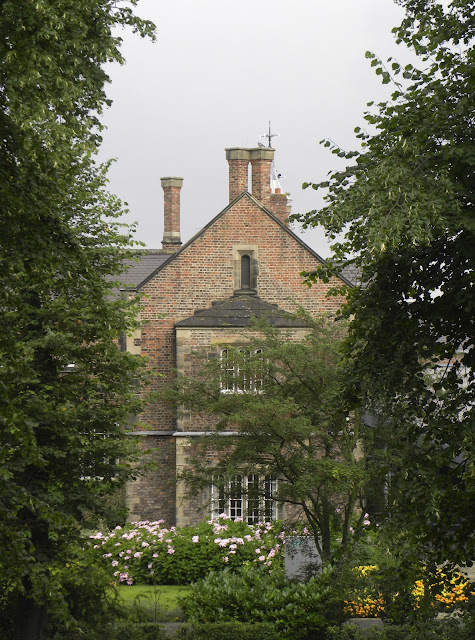 We continued down the tree lined street, appropriately called Blossom, gawking like the tourists we were when there looming in front of us was the grandest medieval entrance to a city I had ever seen.  It was Micklegate Bar, the main gate to York. I was awestruck. It practically shouted of York's considerable prestige, wealth and military might. I certainly got the message as well as, I imagine, any medieval invading force foolish enough to take them on. 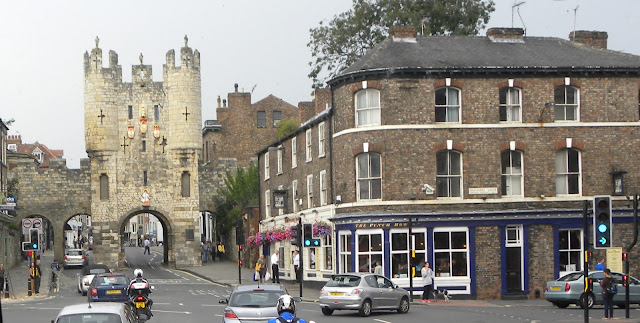 Michlegate Bar on the south side of York. 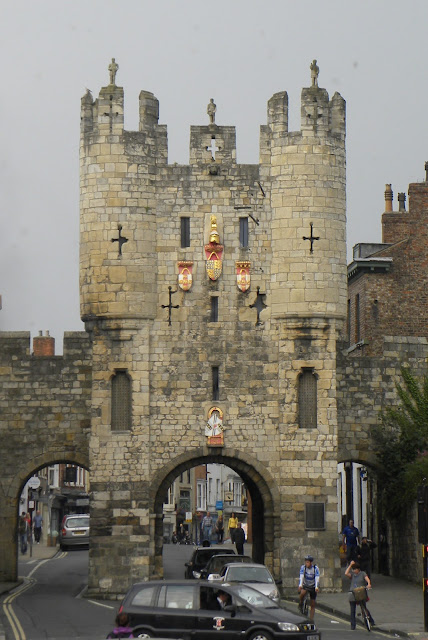 The Queen must stop at Micklegate Bar and ask permission
Of the Lord Mayor to enter the city. 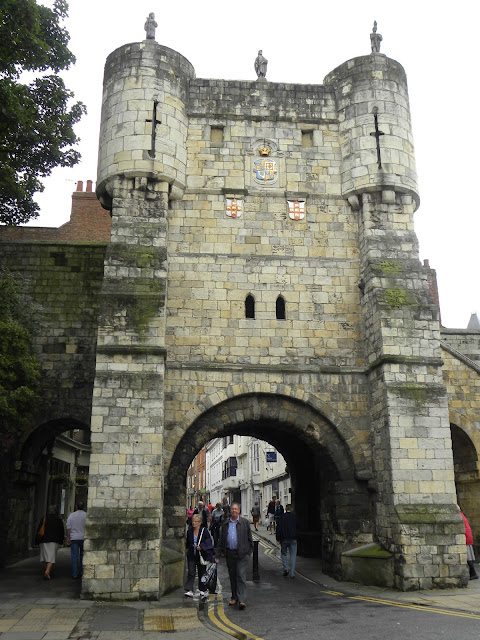 (Note:  Bar is a Viking word for gate, whereas gate is Norwegian for street so Micklegate Bar would actually be Mickle Street Gate!)

We arrived at our hotel, the Park Inn on North Street around 4PM and as soon as our baggage was unloaded we grabbed our raincoats and umbrellas and joined Anita for a short introductory tour of York. With "whisperers" around our necks, (a listening devise with an earpiece that kept us from crowding around her like a gaggle of ducklings)  we set off.

Turning left from the hotel we walked to Bridge Street, crossed over the River Ouse and headed for one of the most interesting streets in York called the Shambles. It was raining quite hard and ominously dark by the time we got there which made the narrow little cobblestone street feel like a page out of a Dickens novel. Especially so after I heard Anita tell us through our whisperers, "The word “shambles” is an obsolete term for open-air slaughter houses. And if that isn’t gruesome enough, running down the center of the street is a sunken Roman style drain where the butchers would throw discarded carcass bits to be swept away." No wonder that the word “shambles” came to mean a big time mess! Now it is one of the best preserved medieval market streets in Britain and it smells a lot better too, fortunately for us. 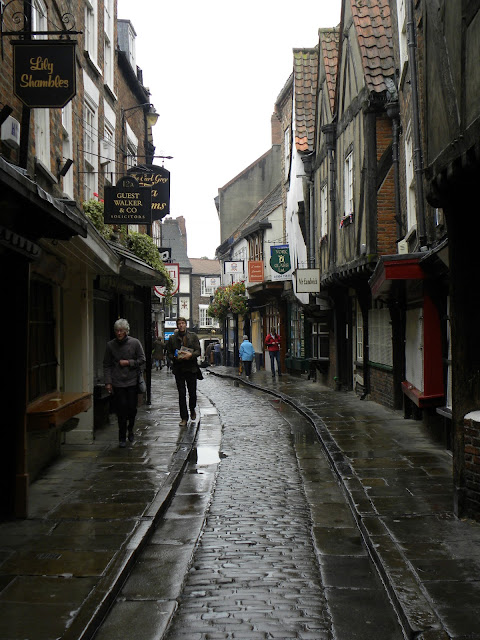 The Shambles
Interesting note, the street was probably narrow to keep sunlight off of the carcasses.

As we exited the Shambles, the streets opened up into cheerfully lit broad thoroughfares filled with very well dressed people hurrying to get out of the rain and into the many restaurants and pubs. The ladies were dressed to the nines wearing hats and fascinators (those tiny little hatlings which perch precariously on the side of one’s head). They had been celebrating Yorkshire’s Ebor Festival at the race track and the atmosphere in the streets was electric with excitement, and the evening had just begun.

Looking past the happy groups of revelers, I couldn't help checking out the latest fashions in the many upscale shops. I began to realize that ladies clothing here and elsewhere tended to fall into two camps. There seemed to be either the lady of the manor style, which consisted of a twin set, wool skirt and sturdy shoes or something I began to identify as Shabby Retro. In America, retro would be a modern take on clothing dating back a few decades; however in England it was more like centuries!  The style seems to consist of a blend of period costume with well-worn T-shirts.Definitely a fun look for the young at heart.

This one looks like a Edwardian rendition of mom’s old bathrobe accessorized with brother’s combat boots. If I were in my twenties, I would have told them to wrap it up!

We went back to our hotel to dry out and together enjoy a hot meal of “Curried Parsnip Soup, Honey Roast Bacon Loin, and Mango, Ginger and Orange Sponge with Custard”.I have to tell you that I  had nothing but the most delicious meals in England. If anyone ever tells you English food is bland and tasteless, sneer and asks them where they got their misinformation. It’s not your Granny’s Britain any longer!

Settling in for the night I realized that I had hit the jackpot with my room.The hotel was located right on the River Ouse and I had a panoramic view of York and York Minster from the comfort of my bed.  Sweet! 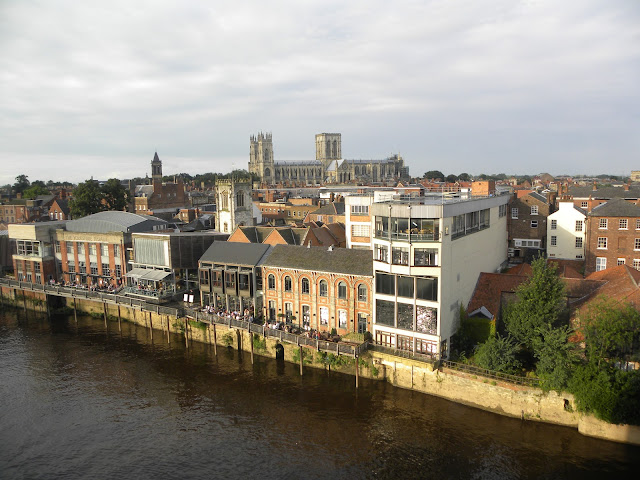 View from my room overlooking the River Ouse and York Minster in the distance.

Next time: York Minster, Walking the Wall, York Museum and the Viking Experience

Posted by theworldaccordingtobarbara.com at 2:27 PM