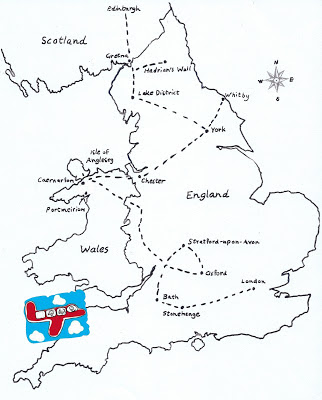 Map of my Grand Gallup through Great Britain

We were to meet our guide Anita for a tour of York Minster first thing in the morning, and I overslept. The battery in my watch had decided sometime the night before that it wanted to die and be buried in England. I barely had time to brush my teeth, throw on some clothes and dash down the stairs to meet the other members of my tour group. After relieving everyone’s anxiety that I wasn’t ill (no time for make-up either) we set out for York Minster.

If anyone tells you that if you’ve seen one cathedral you’ve seen them all, you can rest assured they don’t like museums either so just ignore them. Each one has its own unique history and art as well as being a living place of worship. These huge churches, called “minsters” in England (from the old Saxon name for “mission church”), were many times the most important structures built so to dismiss them is to dismiss a significant part of the country’s heritage.

Some of the most important minsters were built around 900 years ago and are the first to represent the transition from churches that were squat and dark to the ones we see today that are soaring and light filled. The secret was in the shape of the arch. The rounded arch perfected by the Romans allowed buildings to only support limited heights, but master masons around the 11th century learned that a pointed arch supported much more weight with less mass allowing for large expanses of windows to let in the light. Supported also by ribbed vaulting and flying buttresses, these churches are a marvel of engineering and ingenuity. They are similar in that they are all built in the shape of a cross.

York Minster added its own artistic stamp on the cathedral style by having the world’s largest medieval stained glass window, The Great East Window with some 1,680 square feet of it. However the real beauty, I think, is the Great West window with stonework in the shape of a heart, affectionately called “The Heart of Yorkshire”.

After the York Minster tour I set out on my own, grabbing a chicken sandwich and coffee from the local McDonald’s. (What’s ironic is I NEVER eat at McDonald’s when I’m state side, only when I’m in places like York, Paris and Venice! But sometimes a little taste of home hits the spot besides being cheap.) I then headed for the two miles of wall that surrounds the ancient heart of York. I decided that “wall walking” was my favorite thing to do in any city that had one. Usually the highest vantage point around, I enjoy the bird’s eye view. Also, it can be a leisurely and peaceful way to explore, like having my own personal perch. 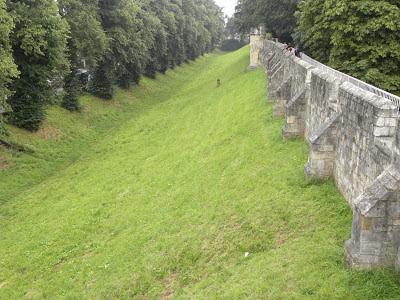 York's medieval wall and dry ditch. The walls are
built on the remains of the old Roman walls. 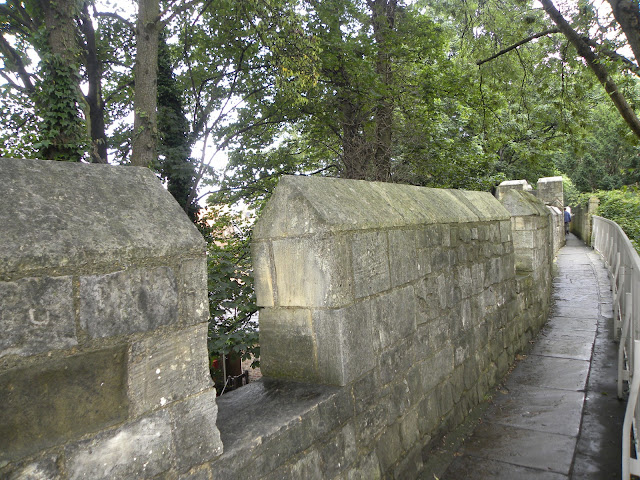 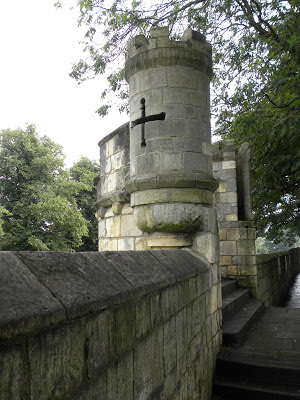 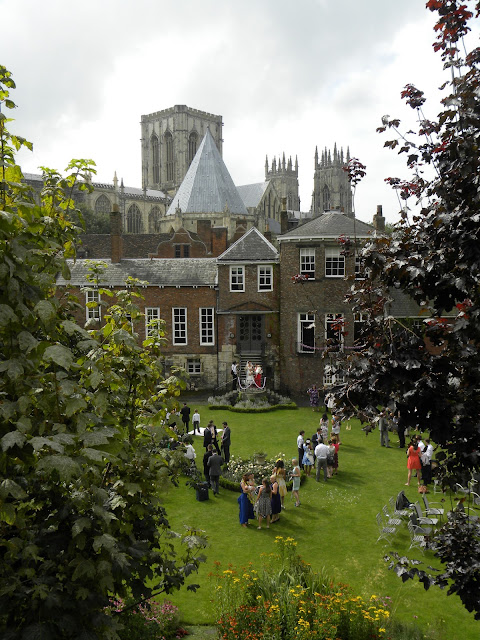 A wedding is celebrated a stone's throw from the Minster
and I have the privilege to watch it from my perch on the wall. 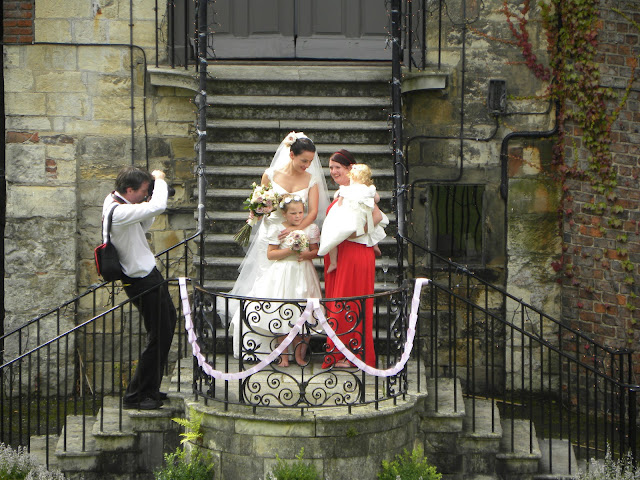 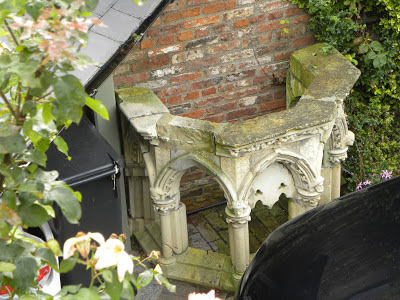 A piece of history in someone's back yard. 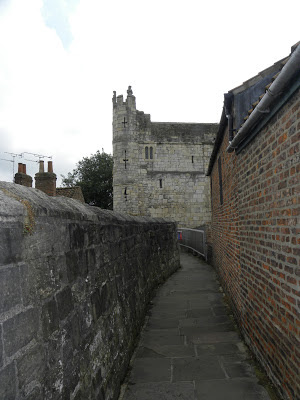 On the medieval wall surrounding York facing Monk's Bar,
another of York's famous gates into the city.


I shopped awhile, bought a new battery for my watch then meandered over to the York Museum for a very enjoyable couple of hours. They were displaying a nice collection of Roman artifacts as well as an informative display of the other “invaders” of England over the centuries that have added to its culture, language and heritage. York has gone through a series of name changes too because of it. The Romans first established a major fortress here and called it Eboracum. When they left, the Angles from northern Europe moved in and renamed it Eoforwic. Then the Vikings swarmed down from Scandinavia, built their thatched roof huts and called it Jorvik which was later shortened to York. 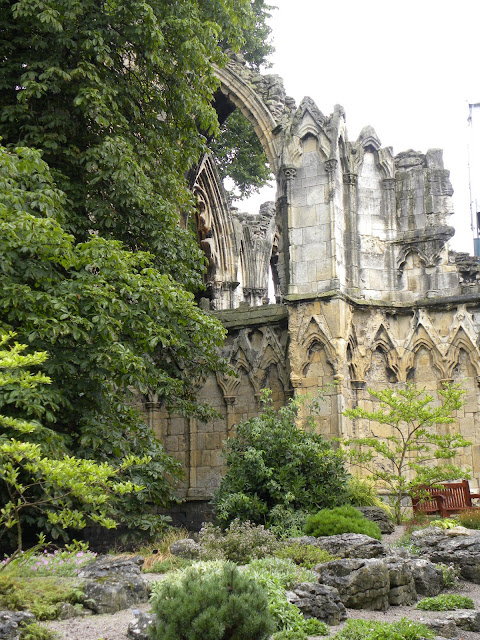 The museum is built into the ruins of St. Mary’s Abbey,
once the wealthiest Abbey in north England.


It was getting to be late in the day and it had begun to rain in buckets, but I had one more place I was determined to see before the day was over—The Viking Museum. I knew that the Vikings had dominated the area for 200 years and had contributed a lot to  the culture and language of Britain so I really looked forward to a quality exhibit of Viking artifacts. Maybe, I thought as I sloshed through the rain, they would even have the excavated remains of a Viking boat!

When I arrived it surprised me that the place was almost empty. My first thought was that it was because of the rain, but, as I soon found out, that wasn’t the only reason. After paying my 10 pounds (about 15 dollars) I was directed down a dark corridor to an awaiting chipped metal amusement cart, meant to seat six uncomfortably, and strapped in by a pretend Viking warrior wearing a horned hat and faux fur. I was the only passenger. My heart sank as the mechanical cart and I lurched down a pair of groaning tracks into a bad Disney style version of a primitive village. Creaking and clanking around a corner, I came face to face with an unnerving realistic looking automaton that acted like it had been possessed by aliens unfamiliar with human movement. It stared glassy eyed at my chest while its left arm jerked wildly. Its mouth flapped opened and closed like a dying fish for several seconds before a disembodied voice boomed out, “Welcome to my hearth!”

Pitching and swaying past the robot’s family of fourteen grinning clones including the ratty stuffed animals that lived with them, my decrepit cart and I lumbered on. I now understood why I was strapped in so tightly.  It wasn't to keep me from falling out of the cart, it was to prevent me from clawing my way out half way through the ride! With excruciating slowness, we lurched past one dusty village vignette to another, each sadder than the last until thankfully we ground to a halt back where we started.

As I retrieved my raincoat and umbrella in the lobby, a young leather clad attendant asked me, “Well, how did you like it?”

“It was pathetic,” I replied. “But, I wouldn’t have missed it for the world!” 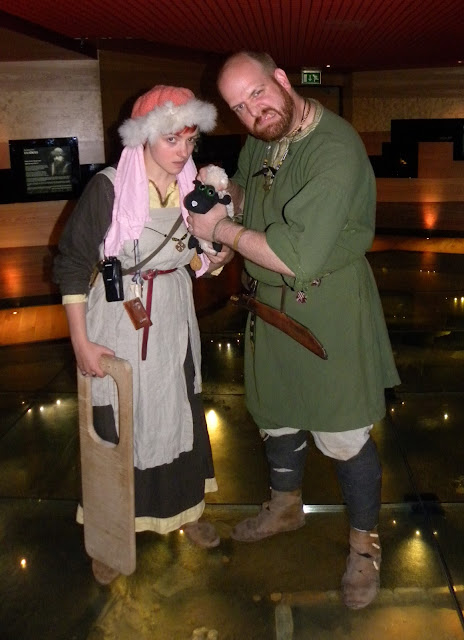 I had to rescue Sean the Sheep from these fierce pretend Vikings who had planned
to make him the main ingredient of their mutton stew.


SUGGESTED READING: Pillars of the Earth by Ken Follett (An historical novel about the building of a Gothic cathedral like York Minster.)

DON’T MISS: When in York, be sure to take some of the Guided Wall Walks!  They are funny, fun and informative.

Next time: Whitby, the Abbey and Castle Howard
Posted by theworldaccordingtobarbara.com at 11:23 AM