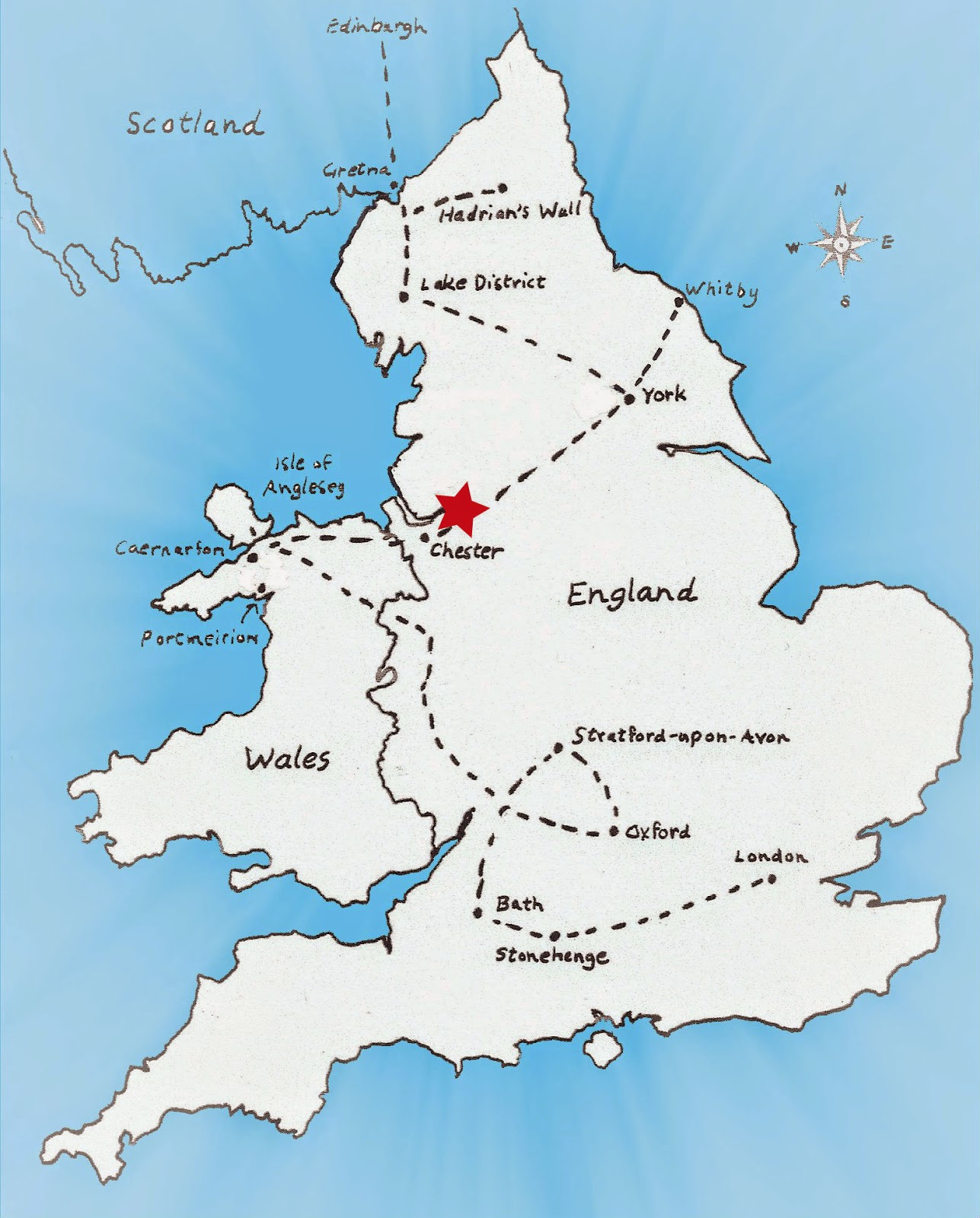 We had arrived just in time to witness a continuation of a 500 year old tradition, the local Town Crier gathering a crowd at the Chester Cross in front of St. Peters church located in the middle of town.   Ringing a bell almost as big as his head and wearing a red frock coat and black tricorn hat,  this Town Crier was more intent on entertaining us with a bit of local history flavored with Cheshire humor than hollering out the news of the day as was customary in days gone by.

“Goodly citizens,” he shouted, sweeping his hand in front of him indicating an evil looking wooden devise equipped with a padlock, “can anyone identify this instrument of punishment I have before me?”   After several shouted wrong answers (including mine--I thought it was called “stocks” and still do! See note below.) he said, “Alas, it is called a pillory and the purpose is to expose the poor soul confined to it to ridicule and mockery. Do I have a volunteer to be mocked and ridiculed?”  Larry (one of our tour group) not-so-gently shoved his reluctant wife Barbara to the front where she was ceremoniously locked in and as her punishment was held captive for the entire length of his speech. 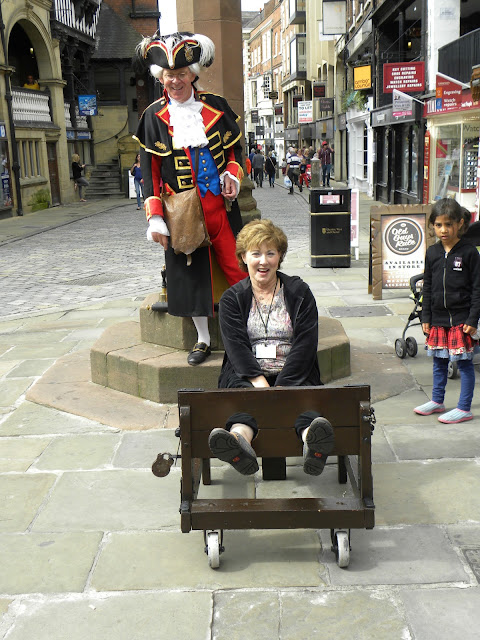 “Chester, good friends, was first established in 74 AD as a Roman stronghold. As one of three main Roman bases, Chester was the major settlement in Britannia situated as it is on the border of Wales and at the mouth of the River Dee. It is also one of the best preserved walled cities on our fair island and still contains a large quantity of Roman artifacts. In fact, on this very spot once stood a Roman fortress! We can also boast of having the largest Roman amphitheater in Britain, built to accommodate 7,000 people.

“We also have the Romans to thank for the unique structure of our stores and shops in our fair city, called the Rows.  You might say that we were the very first to have a two tiered shopping center!  The lower level, which had been cellars or storage areas called undercrofts and are now fine shops, are the remains of Roman buildings upon which around the 13th century were built upper buildings that overlapped the crofts providing a covered walkway or Row. Thus the ladies and gents of Chester could shop at their leisure protected from the elements."

I looked over his shoulder at the buildings beyond and I could see what he was talking about. The first floor wasn't actually a full floor in height, but partially buried below street level. One would have to take a few steps down to enter the undercrofts. 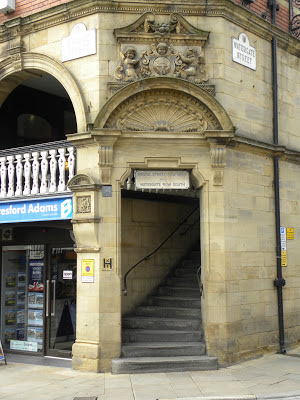 One of the stair entrances to the "Rows", the balcony walkways unique
to Chester.  (Upper left in photo)


“And if it looks like you might meet William Shakespeare walking down these cobbled lanes at any moment that is no accident. The Victorians took great care to restore many of the Jacobean era (James I, 1603-1625) half-timbered style buildings adding an air of refinement to the style as was their custom.

“Ah, I see our time has come to an end. Sir, you may retrieve your fair matron. Her time of humiliation is over and she thanks you all for your restraint in not throwing rotten produce. And now I must take my leave, but first this thought:

The Romans gave us the wall,
The Saxons, our name,
The Normans, the Cathedral,
The Victorians, the Clock,
The US, McDonald's!”

After we retrieved Barbara, Anita, our tour guide, took us on a short tour of the town. Almost everyone in our group had never heard of Chester before and was anxious to see more of it. We started by climbing the steps of Northgate and walking along the well preserved medieval walls, which proved to be a great vantage point to start appreciating this charming place. Beautifully restored and maintained, I really could imagine the Bard himself strolling along the Rows window shopping for fine Chester wares. It didn’t look centuries old at all, but alive and vibrant as the day it was built. On our way, we walked by the grand and sedate Chester Cathedral, enjoying its lovely gardens. Then we climbed some steps onto a bridge spanning main street where the intricately ornate Victorian Clock that the Town Crier alluded to presided over the town. Crossing the old stone bridge to the other side, we walked along one long side of the wall and almost 75' below us we saw a part of the canal system that crisscrosses the island. 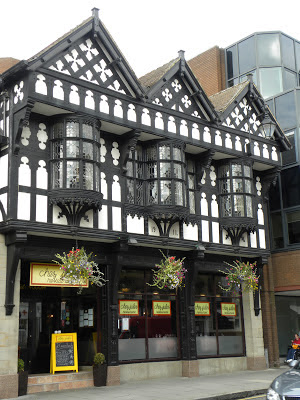 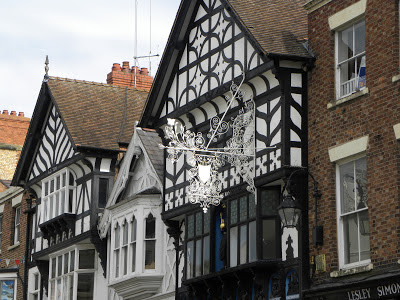 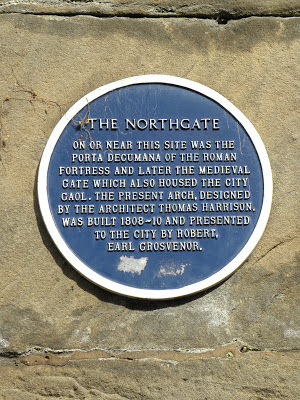 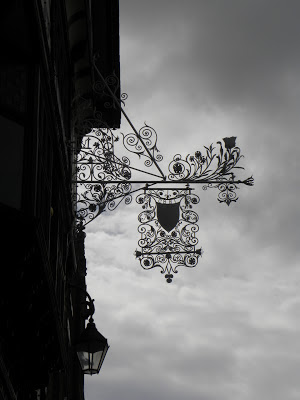 Our tour being over, my new friends Chuck and Paula and I were starving and after listening to my raving about how delicious Cornish pasties were, we found an eatery with a sign outside advertising fresh pasties right out of the oven. As if stuffing our faces with the hearty meat pies weren't enough, we made a visit to the local "sweetie shoppe" for dessert and Sean flirted with the counter girl.

We all agreed as our big silver tour bus drove out of town that Chester had been indeed a very pleasant surprise.

(* When I got home, I looked up “stocks” and “pillory”. According to Wikipedia: “The stocks are similar to the pillory....With stocks, boards are placed around the legs or the wrists, whereas in the pillory they are placed around the arms and neck and fixed to a pole, and the victim stands.”  With all due respect to our Town Crier, I believe the fair matron Barbara was incarcerated in stocks.)

Next stop: York!
Posted by theworldaccordingtobarbara.com at 12:15 PM