We boarded the bus bright and early on our second day in Wales having been promised a tour of some of the best sights in Wales. It frankly sounded like typical tour guide fare but little did I know it was going to be one of the best days of the trip for all of us, because Sean came into our lives. Who knew I was going to fall in love in Wales? 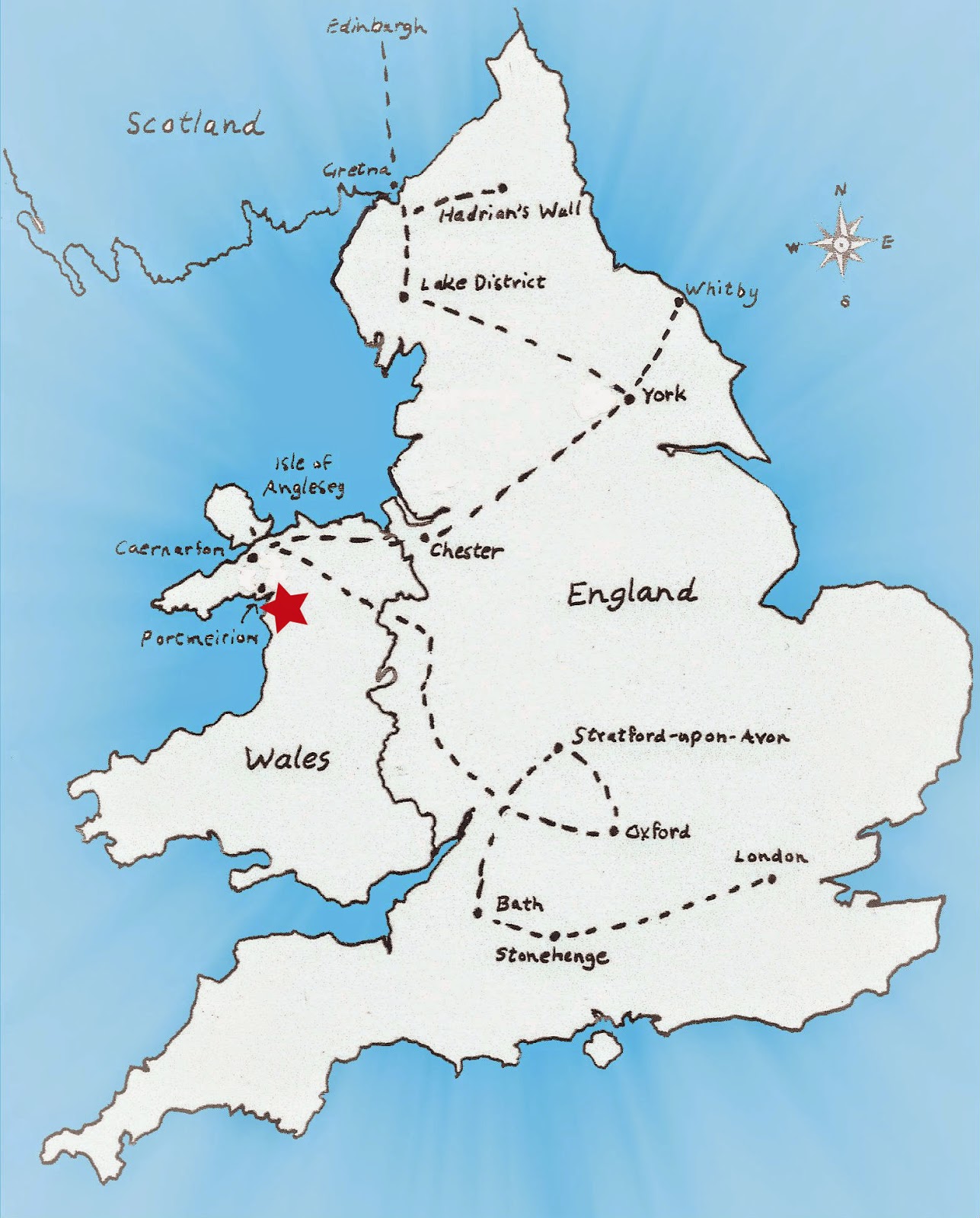 But first, according to our Grand Circle Tour booklet, we were scheduled to take “…a steam train ride on the Ffestiniog Railway from the coast of Porthmadog into the mountains at Blaenau Ffestiniog.  The Ffestiniog Railway is the oldest independent narrow-gauge railway in the world. It was built in 1832 to carry slate but has been carrying passengers since 1864.  Our destination is the strikingly scenic and mountainous section of Wales called Snowdonia, which surrounds the region’s highest peak, Mount Snowdon. Snowdonia is part of the impressive Cambrian Mountains, which are steep-sided and rugged, presenting some of the most spectacular natural beauty in the British Isles.” It sounded impressive.


Porthmadog is on the southern coast of Wales and is best known for being a slate shipping port. It was swaddled in fog when we got there and we had to keep our umbrellas handy as light rain fell intermittently during the morning. We boarded antique wooden train cars hooked behind an equally ancient locomotive blowing out impressive blasts of steam like the little engine that could and chugged slowly up the narrow little rails into storybook scenery. We savored our steaming mugs of coffee while leisurely enjoying the passing views of steep slate filled mountains covered in rich rain soaked pastures and munching sheep that were oblivious to a train full of tourists oooohing and awwwing over such beauty. 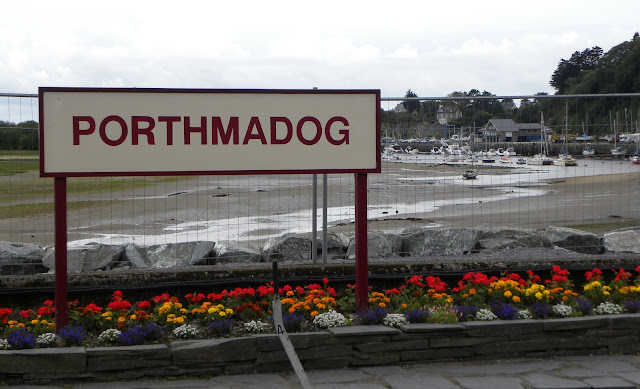 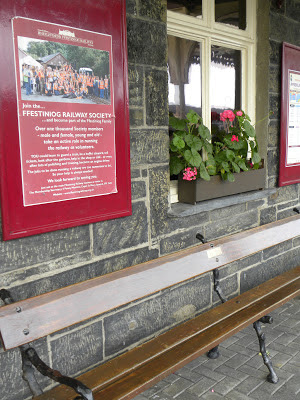 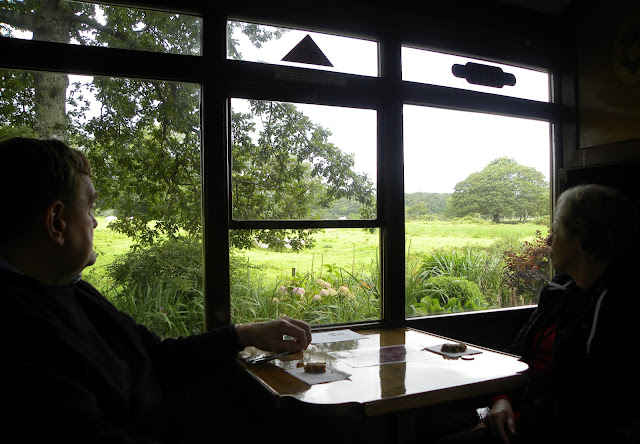 John and Susan enjoying the scenery from the train.

We huffed and puffed our way to the little town of Blaenau Ffestiniog where Davie and our big silver bus waited to take us to Portmeirion. I had never heard of Portmeirion, which isn’t surprising; however Barbara and Ruthie had done their homework and were very excited at the prospect of big savings on an expensive line of botanical dishes that are made there. It turned out Portmeirion was a very pleasant surprise.  Perched on a wooded peninsula overlooking Tremadog Bay it is a whimsical Italian style village built by Sir Clough Williams-Ellis. The delicately hued pastel buildings and architecture capture Sorrento in its charm and it was a delight to wander its steep lanes landscaped with mountains of flowers. 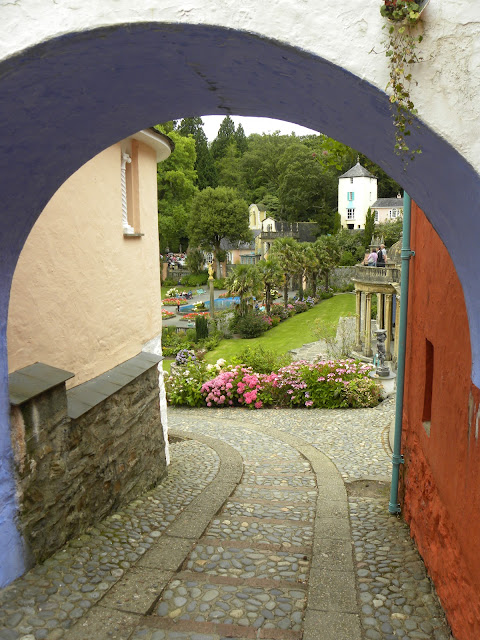 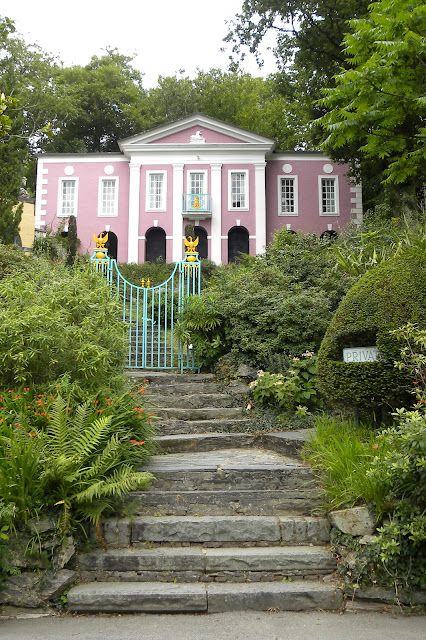 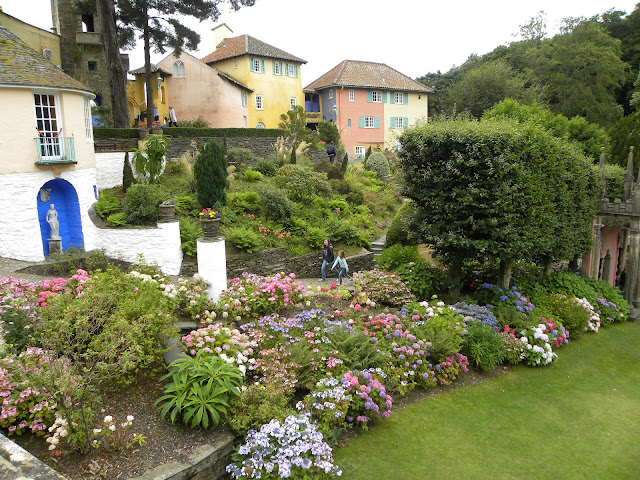 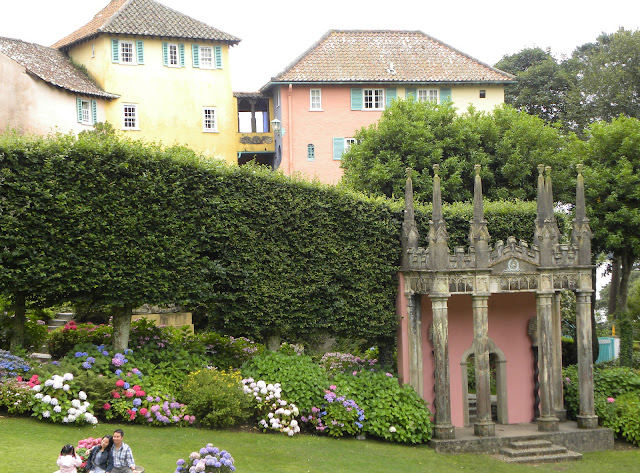 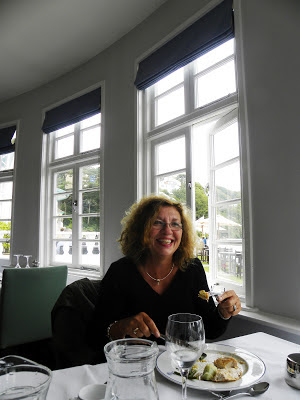 Paula enjoying lunch at the Hotel Portmeirion with Tremadog Bay and Pormeirion in the background.

The Group Who Loved a Doorstop


After lunch Paula and I walked the steep lanes of Portmeirion and drifted into one of the shops.  While she was admiring the famous Portmeirion pottery I spied a tucked away display of goofy faced stuffed sheep. I was instantly smitten. My granddaughter Kailey’s favorite show is an English cartoon called “Shaun the Sheep”. She and I had spent hours watching this black faced woolly hooligan and his hilarious flock and I just had to buy a “Shaun” for her. However, there was only one hitch.  Unlike most stuffed animals, he was heavy. My luggage was already on the edge of the 50 lbs limit and I was afraid that Shaun would put me over.Sadly, I put him down and walked away just when Paula happened by.


“Hey Paula, come here and look at this little guy.  He’s perfect for my granddaughter, but he’s so heavy. Why in heck is he so heavy? Feel that—he feels like he’s full of beans or something.  How in the world would I get him home? My suitcase is already borderline.”


“Take him home in your purse.”  And, with that obvious solution, an ongoing saga was born. My Shaun, who would become “Sean” because he was his own unique self, would ride along in my purse where ever I went; I would take pictures of him and then make a book of our travels for Kailey. And Paula would be my director.


Once the rest of the group saw him, he instantly became the mascot of our tour. Every day, someone would ask about his health or what he thought of this or that.  Larry and Steve began to steal him and leave ransom notes while their better halves, Barbara and Ruthie, shopped in every store between Portmeirion and Edinburgh trying to find Sean clones. Larry especially had a crush on Sean and would take no substitutes. The magic of Sean was that he made a bus full of strangers into a group of close knit friends from that day forward. A star was born. (And by the way, if I had bothered to read his tag I would have found out that Sean was full of beans because he was actually a doorstop. Oh well. I’ve fallen in love with stranger things. ) 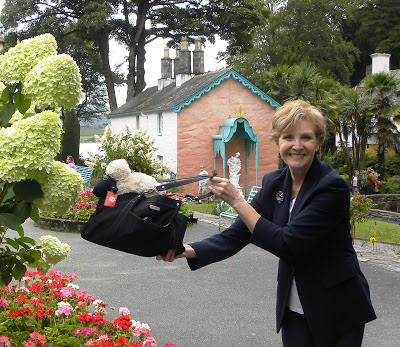 Sean in his personal carrier (my purse) pausing to smell the flowers. 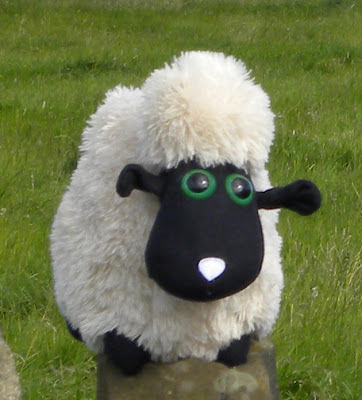 Who could resist this face?  By the way, Sean is a Swaledale, a type of sheep indigenous to Yorkshire.

But, the day was not over. We still had another stop to visit the Welsh Slate Museum. Seems that slate is and was a major industry in Wales since their mountains are full of it. Even in this modern industrial age, slate still has to be hand cut.   Sean had to sit on a pile of it and have his picture taken of course. 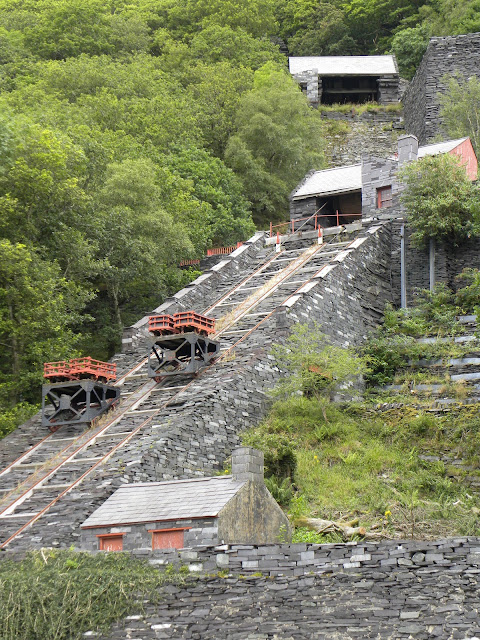 The former slate quarry next to the museum. 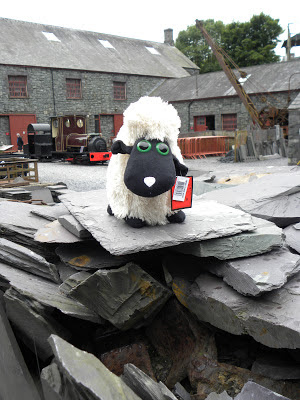 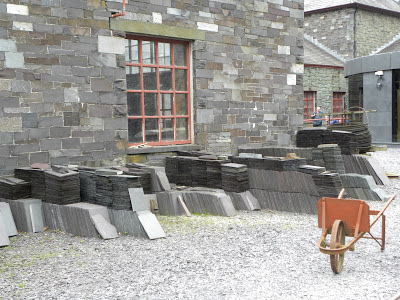 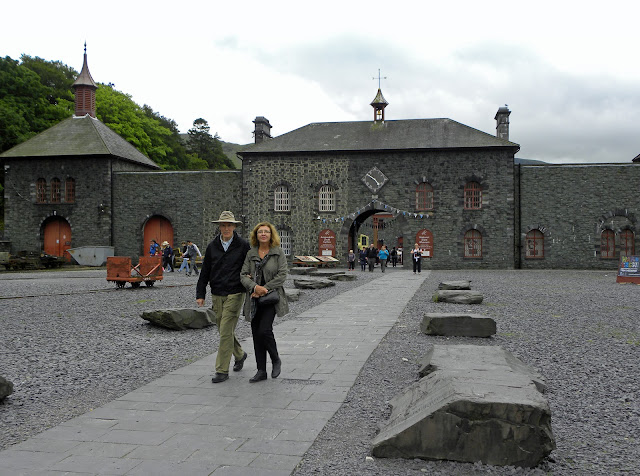 Chuck and Paula in front of the Welsh Slate Museum, site of the old quarry. 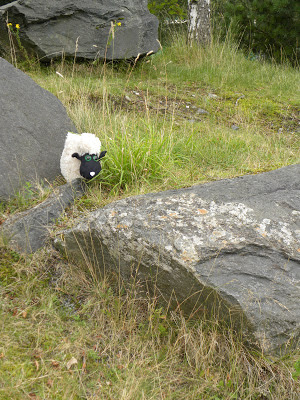 Sean having lunch among the slate after the tour.


(It became clear very early on that I wasn’t going to be able to part with Sean. He was going to be my buddy on every trip I took from now on, which meant I needed another one for Kailey. I recently contacted Richard Lang & Sons LTD in England (makers of my black faced friend) who graciously agreed to send “Sean’s Cousin” to the retailer, Scotland by the Yard in Vermont, who would then send him on to me. So it is a very grateful me who profusely thanks Lois Coleman of Lang's and Donald Ramson of Scotland By the Yard for understanding and enjoying the story of Sean. Bless you both!)


*To start at the beginning of the tour, scroll back in the blog to "My Grand Gallop Through Great Britain".  See and read more about Sean and the group.

Next time: Chester
Posted by theworldaccordingtobarbara.com at 10:59 AM