MY GRAND GALLUP THROUGH GREAT BRITAIN

I realize I've gone a bit overboard with the alliteration, but it aptly describes the wild romp I just had through parts of England, Scotland and Wales. Grand Circle Tours expertly guided a group of us through 2,500 miles of spectacular scenery and centuries of British history in just two weeks. If I hadn't written a daily journal, I'd never remember where I'd been or what I'd seen. But, even though we breezed through some places way too fast (like the Cotswolds), I'm very happy with the variety of historic places we saw, the unique experiences arranged for us, and especially the people I met.

This was my first trip abroad by myself. Up to this time, I'd put off traveling alone for two big reasons: #1, it's so much more fun to travel with people I know, and #2, I like being in control of the pace and agenda. I'm admittedly spoiled by the luxury of seeing what I want to see for as long as I want to see it. This time I couldn't tempt anyone to come with me, so if I was ever going to see England, I had to screw up the courage and go by myself, which meant a tour. Now, tours have their good points and not so good points. The downside is they set the pace and determine what the group sees. Ironically, it is also one of their strong points. On my own, I would never have seen or experienced as much as I did.

Frankly, I did not look forward to traveling with a group of strangers. I knew from experience that who one goes with could make the trip a joy or a misery. But, the 22 well traveled and gregarious people on this tour pleasantly surprised me by being just plain fun to be with. A great deal of the credit goes to Anita, our tour guide, who with unfailing good humor herded us through Britain like a good sheep dog. She entertained us with her anecdotes about growing up in Liverpool while passing out samples of the foods England, Scotland and Wales are known for--everything from cheeses to blood pudding. And, it never failed to delight us when pointing out items of interest along the way she often mixed up her right and left directions. We got rather used to it; when told to look to the right, all heads dutifully swiveled left. 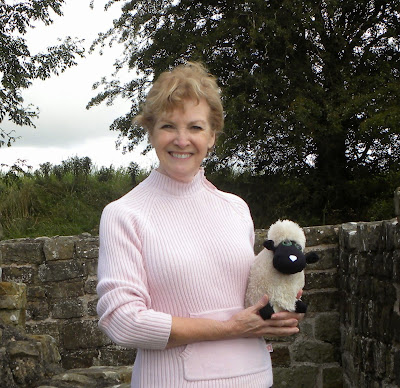 Then Sean came into our lives. I fell in love with him the first time I saw him in a gift shop in Portmeirion, Wales. I couldn't resist his goofy little face, Celtic green eyes, and his bean filled belly.  He quickly became the rock star of the tour group, everyone becoming a member of his fan club.  "How is Sean today? Did he sleep well?" they would ask. And Larry and Steve, brothers and partners in crime, frequently snatched him and left ransom notes. So it was Sean the Sheep, without saying a word, who transformed 22 polite strangers into a group of friends sharing a wonderful experience.
Sean and I at Hadrian's Wall 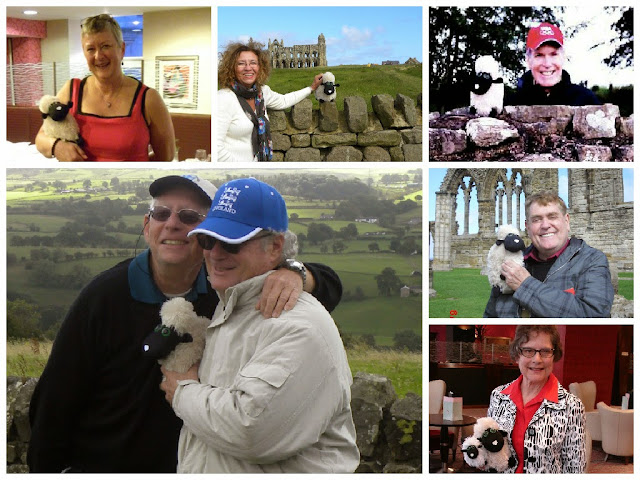 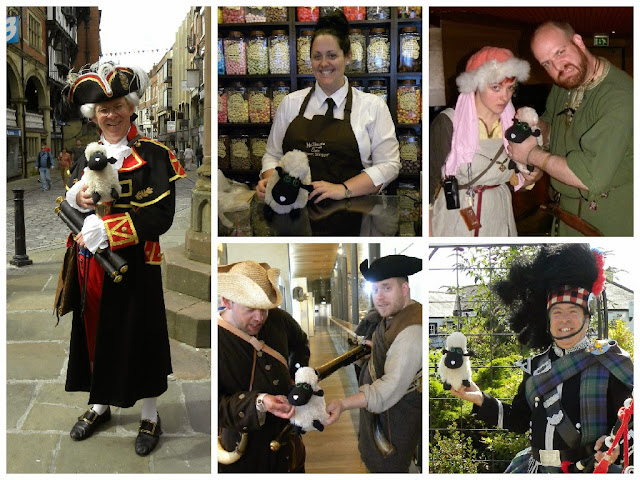 Sean charmed hearts all over Great Britain--from the town cryer in Chester,
to the salesgirl in a sweetie shop. He was coveted by Vikings in York,
snatched by brigands in Stonehenge,
and protected by a Highlander guard in Gretna Green! 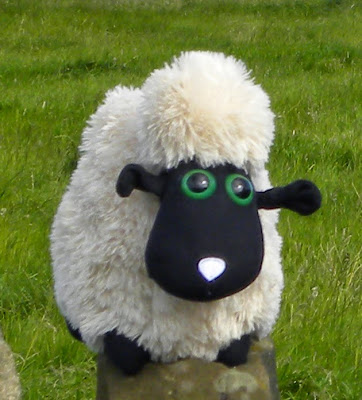 So thank you Anita, Davy (our driver who drove us safely over those 2,500 miles), Barb and Larry, Paula and Chuck, Ruthie and Steve, Pat and Bill, Darlene and Harley, Rosalie and Joseph, Cathy and Jim, Gervaise, John, Frank, Judith, Susan, Barbara, and Brenda for making this trip a joy. And to Judy and Dan who had to leave us too early because of a family loss, you were both missed.  Oh, and thank YOU Sean the Sheep.

Who could resist those adorable googly eyes?? 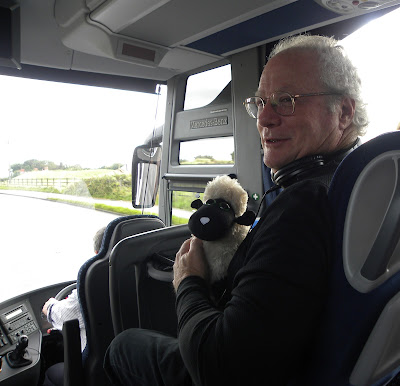 ﻿
﻿
Posted by theworldaccordingtobarbara.com at 9:36 AM