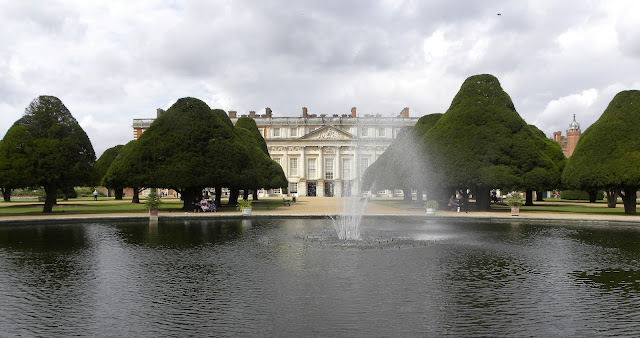 Imagine it's the summer of 1528 and you are Henry VIII. London is hot, the air stifling, and the Royal Palace at Westminster is downwind of a very foul smelling Tower of London. You say to heck with this and collect your wife of the moment and 800 of your closest courtiers and sail upriver 10 miles in the Royal Barge to your favorite Palace, Hampton Court. Surrounded by acres of lush green countryside, it has an abundance of game, and swans swim leisurely in languid ponds; it is pure heaven. However, there is only one hitch. The Palace doesn't belong to you. 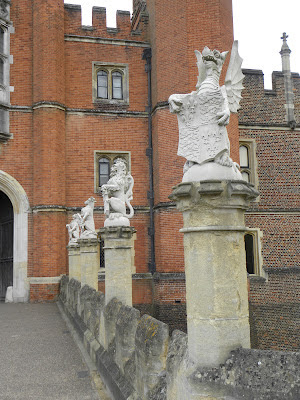 There is nothing worse than being King of England and one of your lackeys has nicer digs than you.  Cardinal Wolsey, Archbishop of York, made the fatal mistake of out styling the King. Not only that, he was unable to persuade the Pope to grant Henry's divorce from Katherine of Aragon and that sealed the deal.  Henry confiscated the Palace as his own, and for the next ten years transformed Hampton Court into the most modern, sophisticated and magnificent palace in all of England and Europe. He added tennis courts, bowling alleys, pleasure gardens and a maze, 1,100 acres of hunting grounds, a vast dining room (the Great Hall) and a huge 28 person capacity bathroom euphemistically called the "Great House of Easement". It remained Henry's favorite until his death in 1547.  All six of his wives visited the Palace and he even married his last wife there, Catherine Parr in her sumptuous private chambers.

Years after Henry VIII's death, the Palace remained an important place in which to entertain and impress. King James I loved plays and William Shakespeare and his "King's Men" were often booked to produce his plays for royal audiences.


In 1689, the Royal reigning couple William and Mary transformed the Palace into a baroque beauty, replacing chimneys, adding towers and changing the east and south facades, giving it a strange mixture of medieval sturdiness and graceful elegance. Many of the gardens were dug up and replaced with sculpted landscapes popular on European grand estates.

The gardens were my favorite part of the Palace.  I spent most of the time we had allotted outside greedily taking as many pictures of as many of the gardens as I could.  Nature and man’s careful grooming of it are what appeals to me most. I'm sure Henry would agree with me that a home is not complete without a landscape full of flowers. 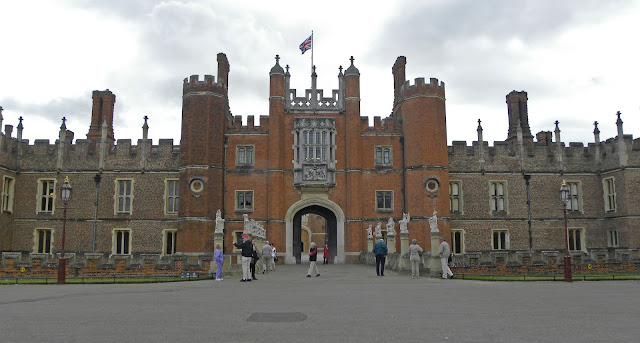 The medieval or Tudor front entrance. 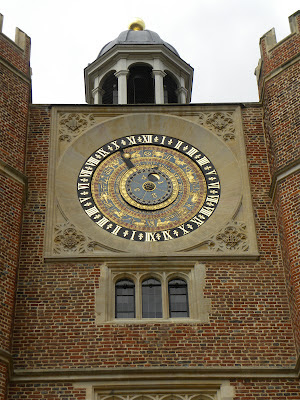 The English love their clocks.  This one is a very unique 24 hour clock. 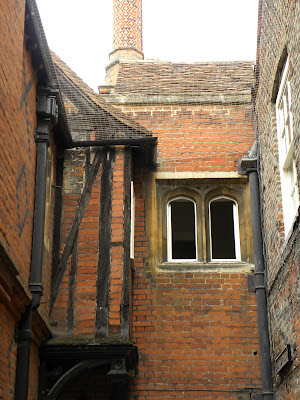 Part of the original medieval building, beside the kitchens. 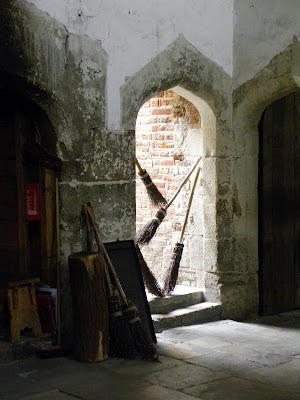 The kitchens were immense, capable of feeding hundreds per day. 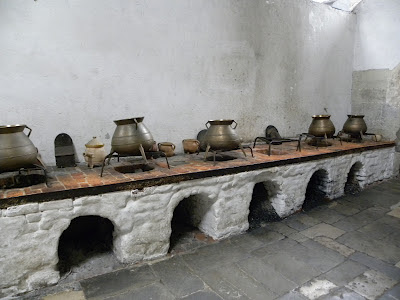 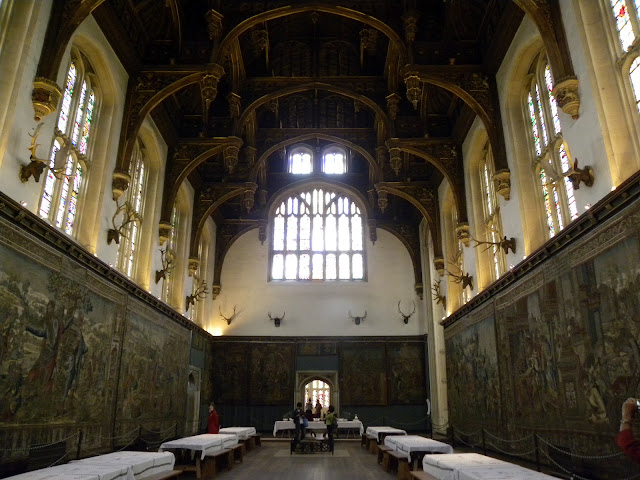 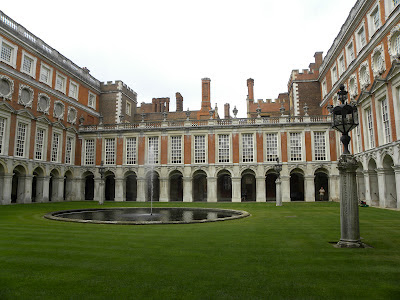 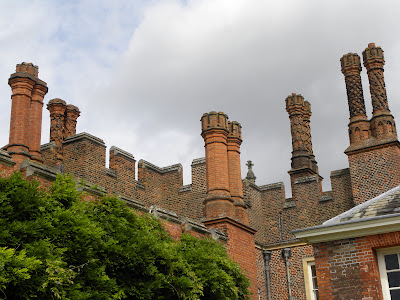 William and Mary added the ornate chimneys, some of which are only
ornamental.  Wealth was exhibited sometimes by the chimney count. 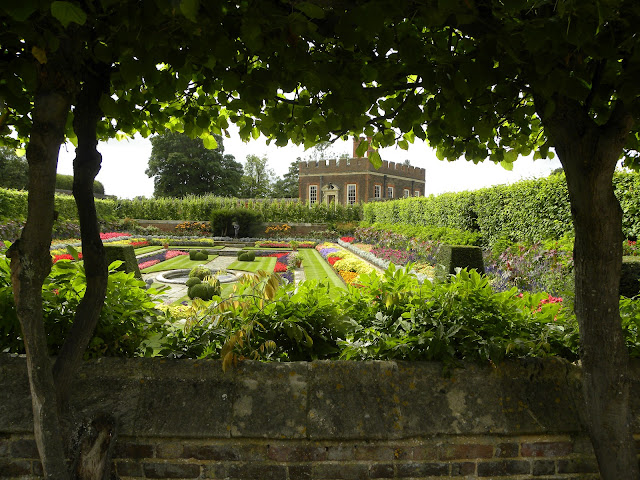 One of the many gardens. 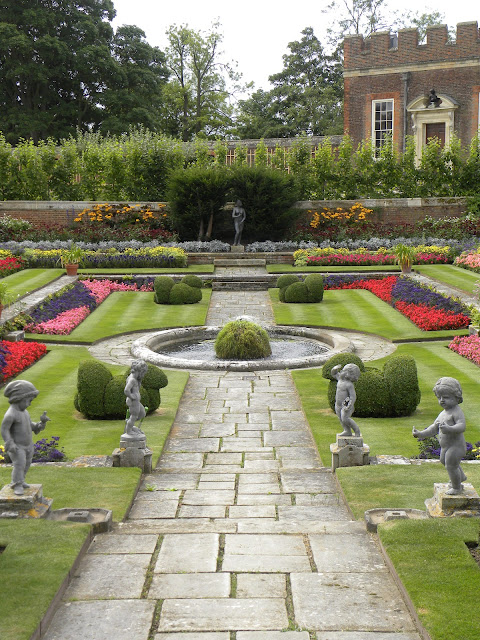 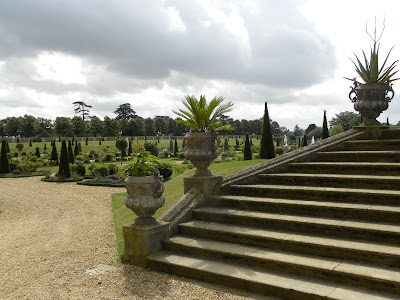 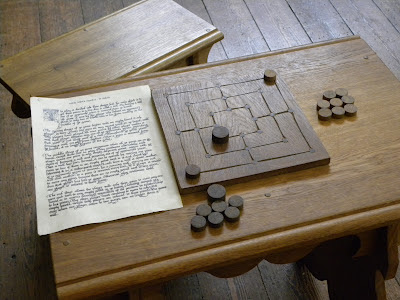 A board game the courtiers may have played outside the King's chamber.
Next time:  Westminster, Buckingham Palace and Dan the Veterinarian﻿

Click on any picture for a full screen slide show.
Posted by theworldaccordingtobarbara.com at 3:40 PM