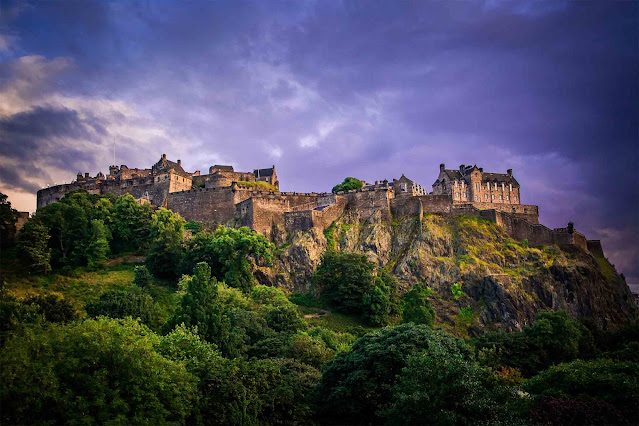 If you want a swashbuckling tale of bravery and betrayal, murder and intrigue, the story of Stirling Castle has it all. From William Wallace, Braveheart himself, to Mary Queen of Scots, more famous names are associated with this towering edifice than another place you can name. Kings and queens made their beds there giving birth to more kings and queens. As the gateway to the highlands of Scotland, it saw many a bloody battle fought over it year after bloody year. The Romans learned to leave it alone, but the British were more persistent. The Scots lost it to the British only to gain it back and lose it again and again until James VI became the first Scottish King of England and settled the matter.

In the beginning, as all good tales are told, the land to the far north of England was a wild and rugged place. Not even the mighty Romans, who sought to rule the island, could conquer the ferocious people who lived there. Like demons they were, with their painted faces and long streaming hair they fought like wild cats and knew no fear. The Romans named the painted ones, Picts, while, the others they called, Scoti, Latin for the Gaels. Interesting enough, the original “Scoti” migrated from Ireland, settling on the western part of what is now Scotland while tribes of “Picts” inhabited the eastern part. Over the centuries, they eventually merged into the unique Scottish people we know today.

Stirling Castle sits atop a massive volcanic outcropping that has been a Scottish stronghold since ancient times. Strategically placed, it guarded what was, until the 1890’s, the farthest downstream crossing of the River Forth. To get to the highlands, and to avoid going upriver where the Forth widened into a marshy and treacherous crossing, invaders needed to cross Stirling Bridge. This narrow wooden bridge made William Wallace, Braveheart, famous.

In 1297, during the First War of Scottish Independence, a British force of thousands led by John de Warenne, The Earl of Surrey, stormed the bridge only to be defeated by Scottish fighters led by Braveheart. The British lost over 5,000 men to Wallace’s few. An incredible triumph, it is celebrated by the Scottish to this day. A towering monument to Wallace sits a few miles away from the castle as a reminder that Scotland’s heart will always be free. 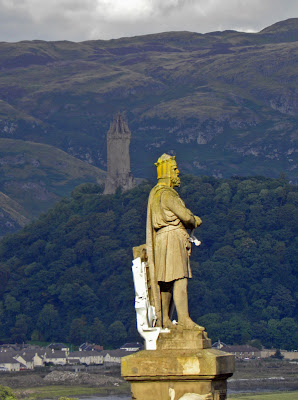 King Robert the Bruce takes pride of place on the castle grounds, but it is the monument to William Wallace that commands attention.

A private tour of the castle

It had been another nonstop day of rain when my friends, Kay, Tom and I arrived late in the afternoon to tour Stirling Castle. Most of the tourists had already left so we practically had the place to ourselves. We discovered this strategy by accident, but now I highly recommend it! Come late—no crowds! 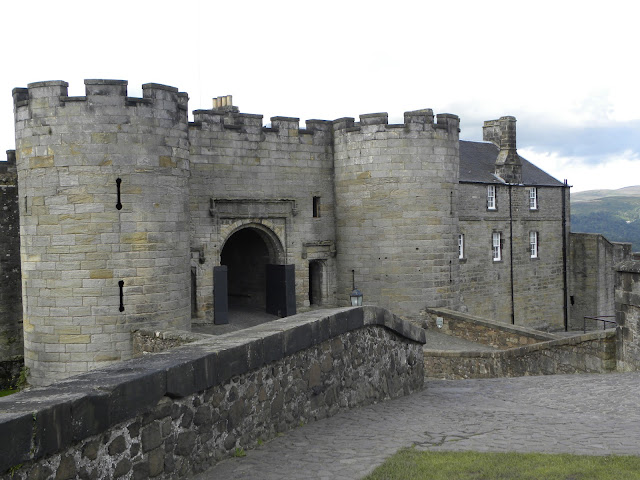 The entrance meant to be foreboding, leads us into a medieval courtyard. Nothing fancy here, it none the less has plush interiors to soften the utilitarian exteriors. 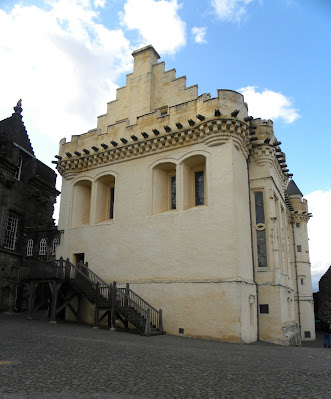 The Great Hall, the largest in all of Scotland was built to entertain in lavish style. 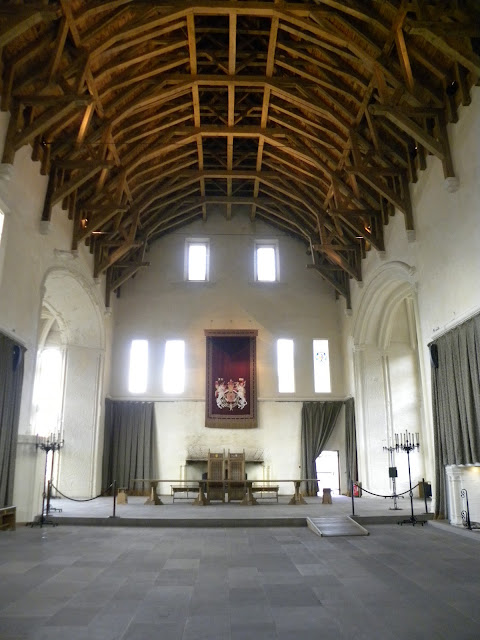 The huge hall could hold hundreds of guests and has 5 immense fireplaces. Imagine all the gorging and butt grabbing that took place. Ah, good times! 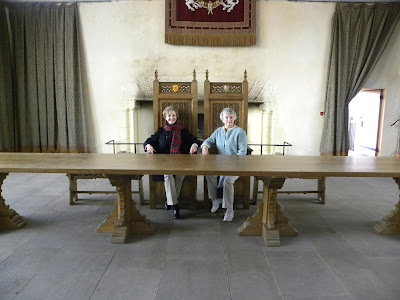 Queens in our own minds, Kay and I command the royal dais! 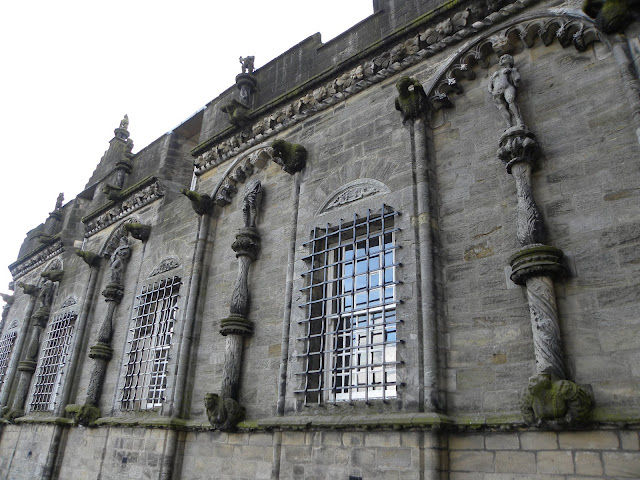 The Palace, built for James V and his French Queen, Mary of Guise, was also occupied later by their daughter, Mary, Queen of Scots. 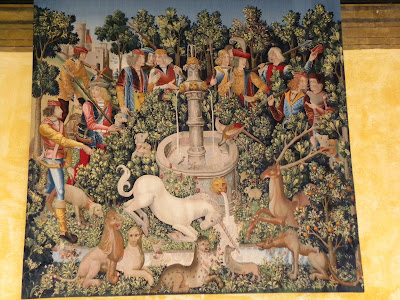 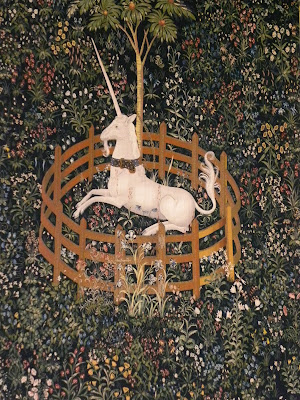 The Palace was closed for remodeling when we visited, however we were given a taste of what it would look like hung with these magnificent tapestries. These exact replicas of the original wall hangings were made in a special studio on the castle grounds. To see the finished Palace in all of it's splendor, click on the link: https://www.stirlingcastle.scot/discover/gallery/ 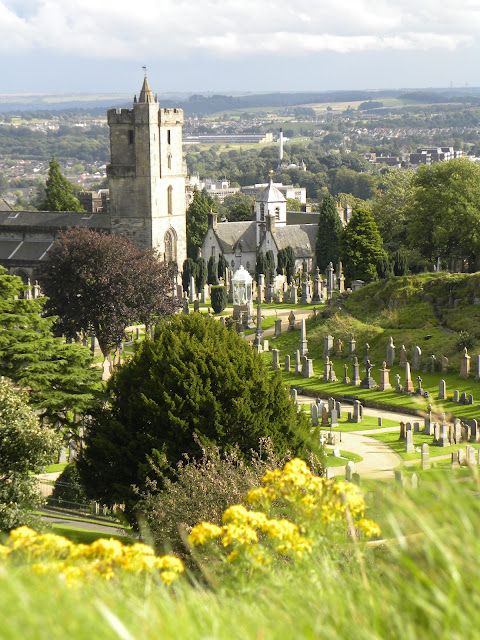 The weather cleared long enough to take this picture from the Castle toward the town of Sterling. 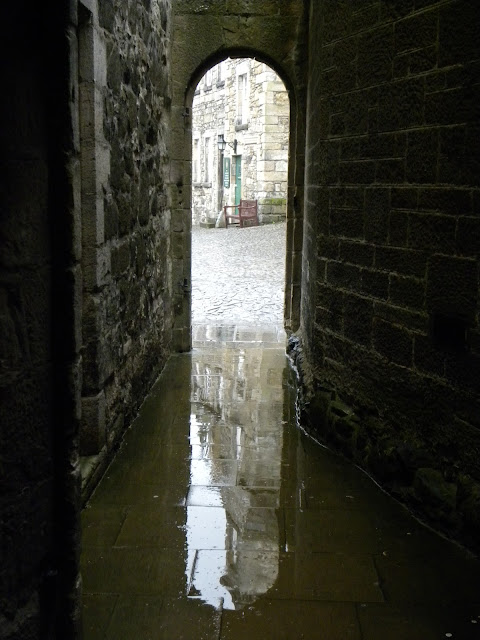 Practically alone in the castle, we sensed echoes of the past around every corner.
For more information on Stirling Castle, click on the link:  https://www.stirlingcastle.scot/
Posted by theworldaccordingtobarbara.com at 11:23 AM