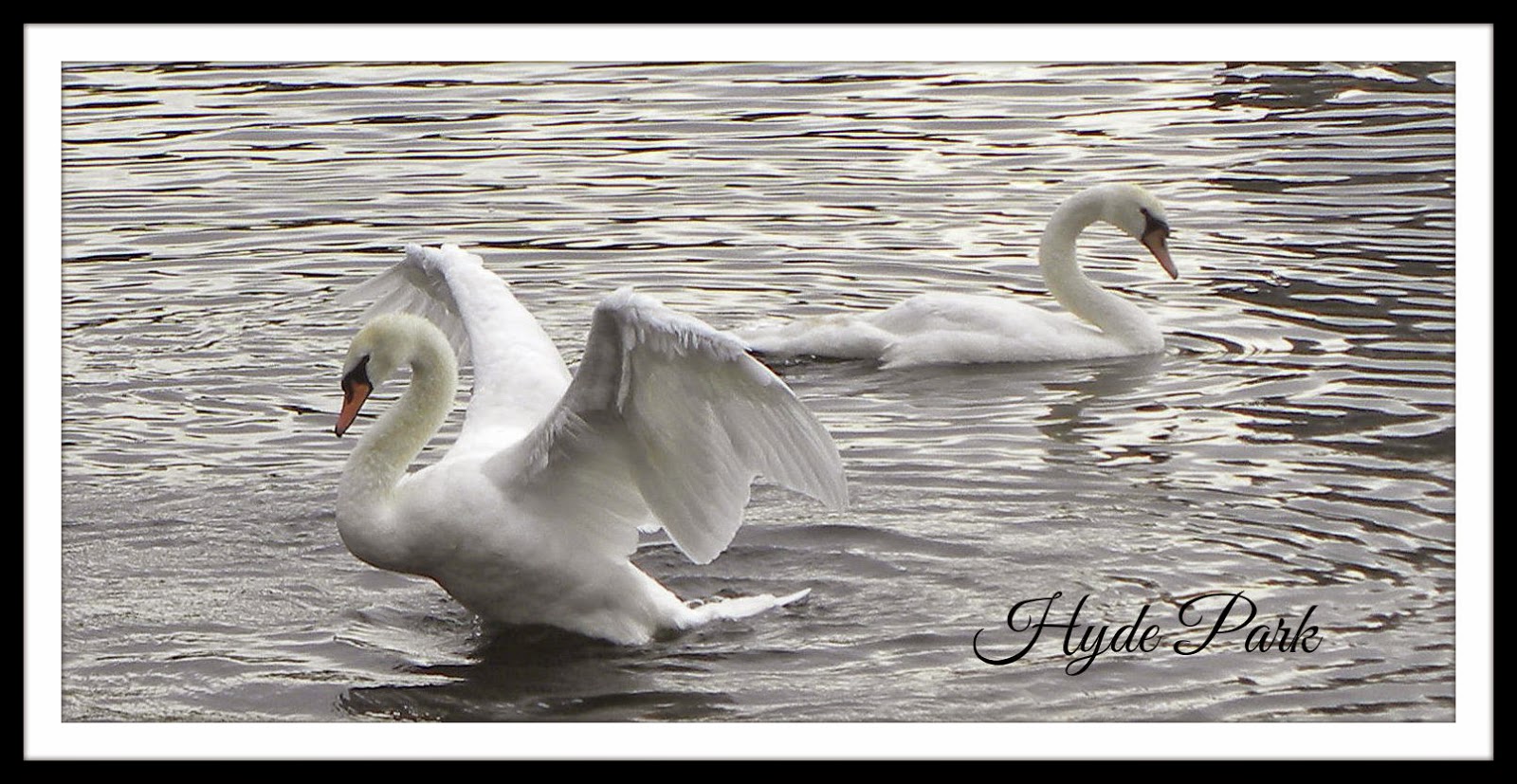 A GLORIOUS WAY TO SPEND A DAY!
After a week of touring the blissful landscapes of Devon and Cornwall, I arrived back in London with time on my hands. My best friends and frequent travel buddies, Kay, Tom and their granddaughter Sutherland, already in flight somewhere over the Atlantic, planned to meet up with me the next day. Our weeks of plotting and planning consisted of staying in London for a few days, then renting a car to  tour the Cotswolds for almost two weeks.. Finally! I’d vowed to come back to England to spend more time in the Cotswolds and now, here I was only two years later, about to fulfill my dream!

Thanks to Kay, Tom and their timeshare program, our accommodations included a week on a rented canal boat. Starting in Worcester, we’d putt-putt down the Severn River to the Avon River and then continue on right into the heart of the Cotswolds. Tom would captain the boat with Kay, Sutherland and I as his “swabbies” and, more importantly, operators of the ancient locks.

But until then, I planned to spend an entire day exploring the very beautiful Hyde Park and Kensington Gardens.

Map of the blended parks of Hyde Park and Kensington Gardens

We’d rented a couple of apartments in walking distance to the park so it took just a matter of minutes to arrive at Kensington Palace. The Palace anchors the park and is still a royal residence with Prince William and Kate calling it home. It’s also been the former residence of Charles and Diana, and Queen Victoria.

As I stood looking at its no nonsense exterior, I tried to imagine Queen Victoria as a child growing up within its walls. Raised by an ambitious, overbearing mother, I wondered if it had been a home or a gilded cage. Beside me, planted solidly away from the Palace, is a statue of the young queen in her coronation robes. I looked up into her marble face and followed her gaze outward to a sun dappled pond dotted with swans and beyond that, the vast park. I’d like to think that the positioning of the stature is symbolic; that it’s in the park where the future queen enjoyed her childhood. 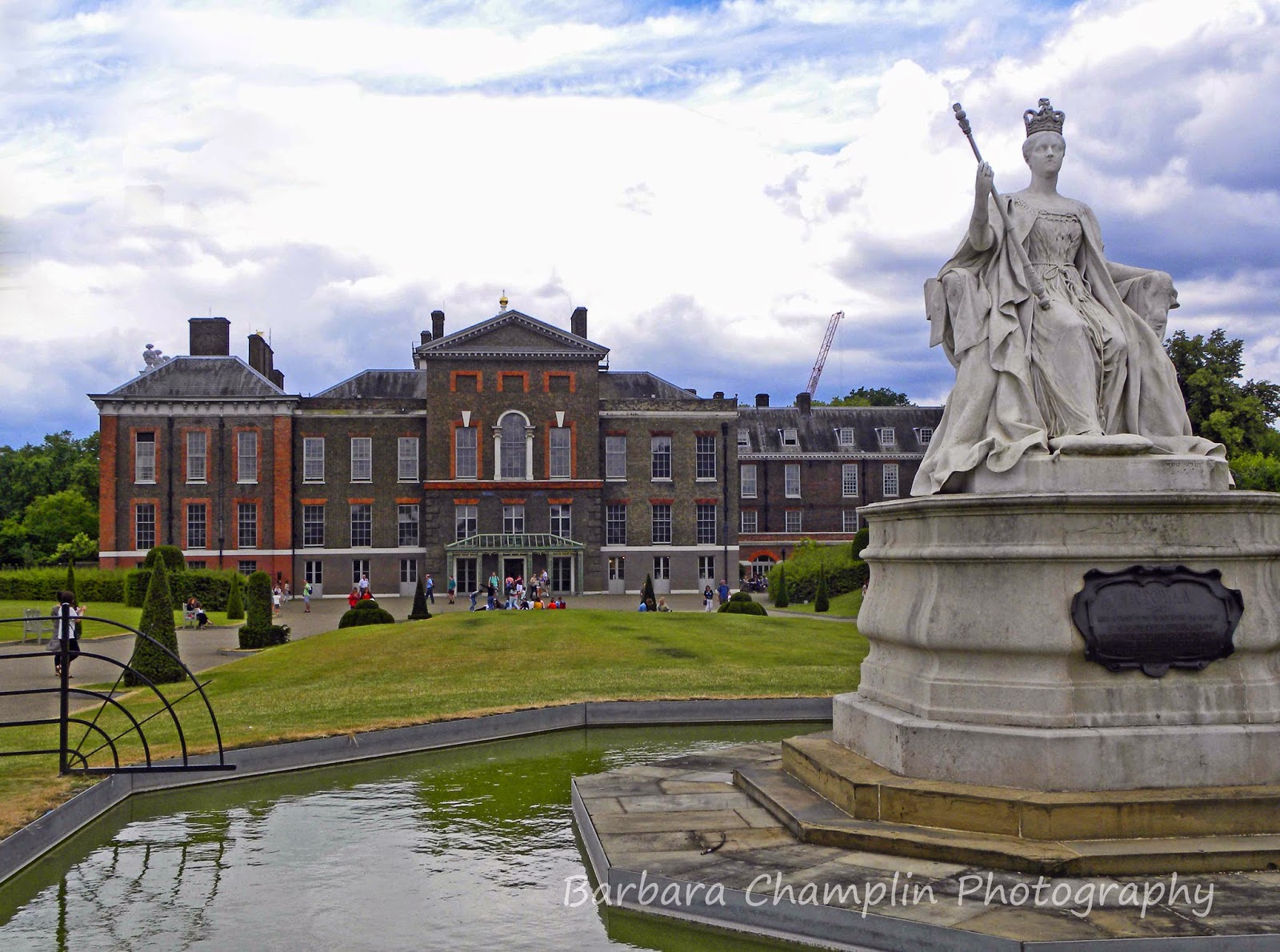 Kensington Palace and a statue of Queen Victoria in her coronation robes.
It was sculpted by one of her daughters, Princess Louise. 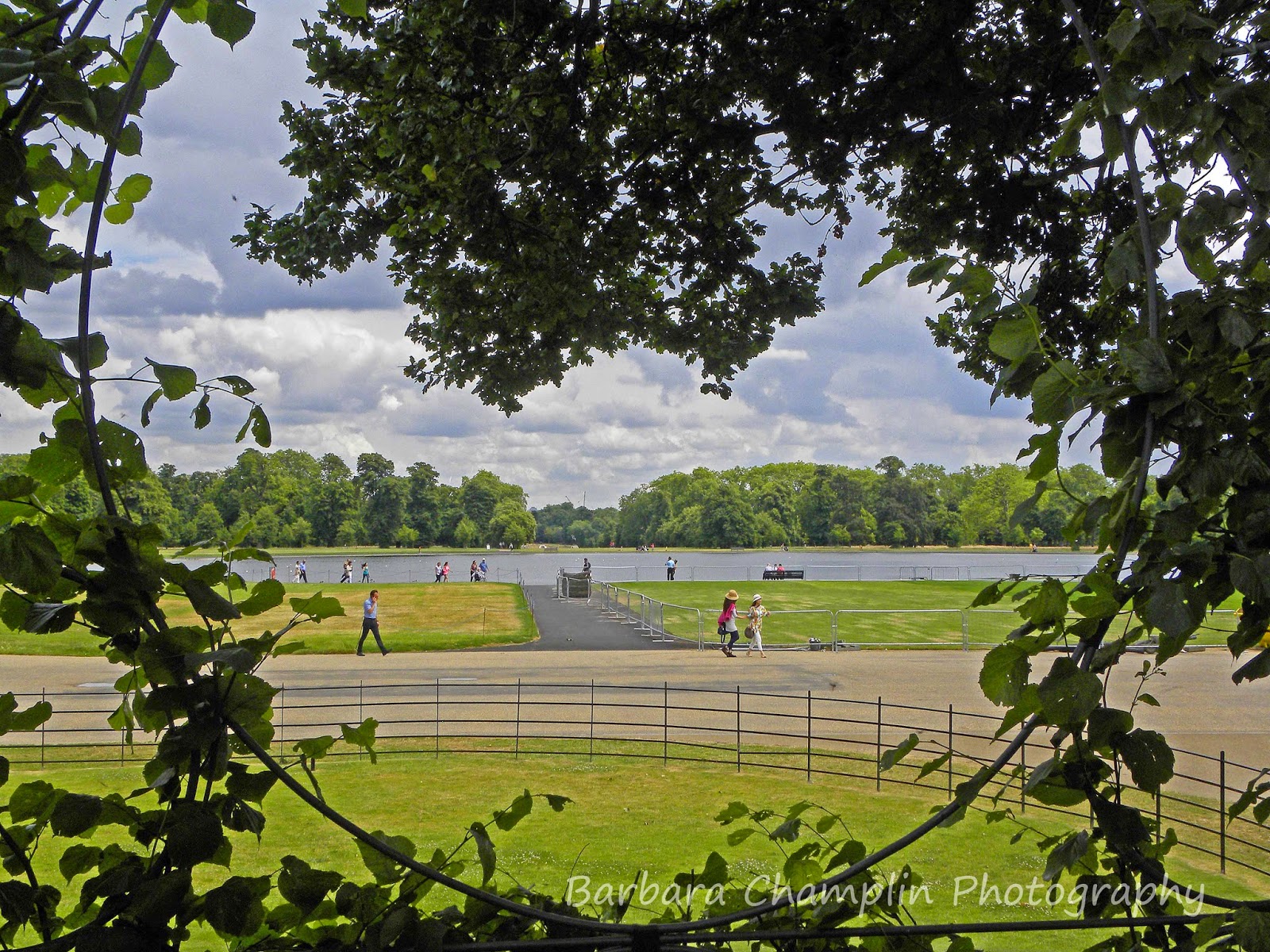 The Round Pond and the Park beyond as seen from the garden arbor. 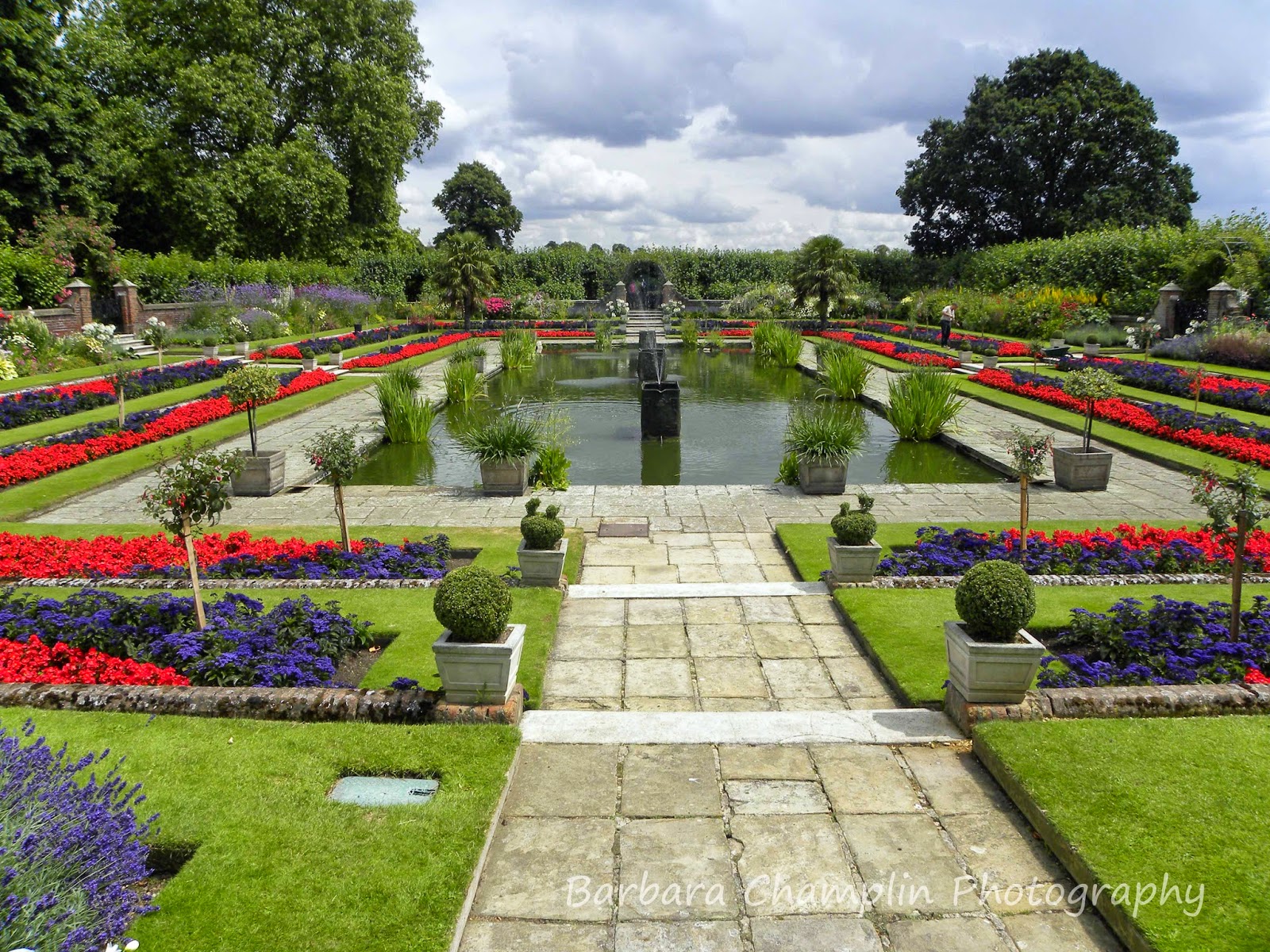 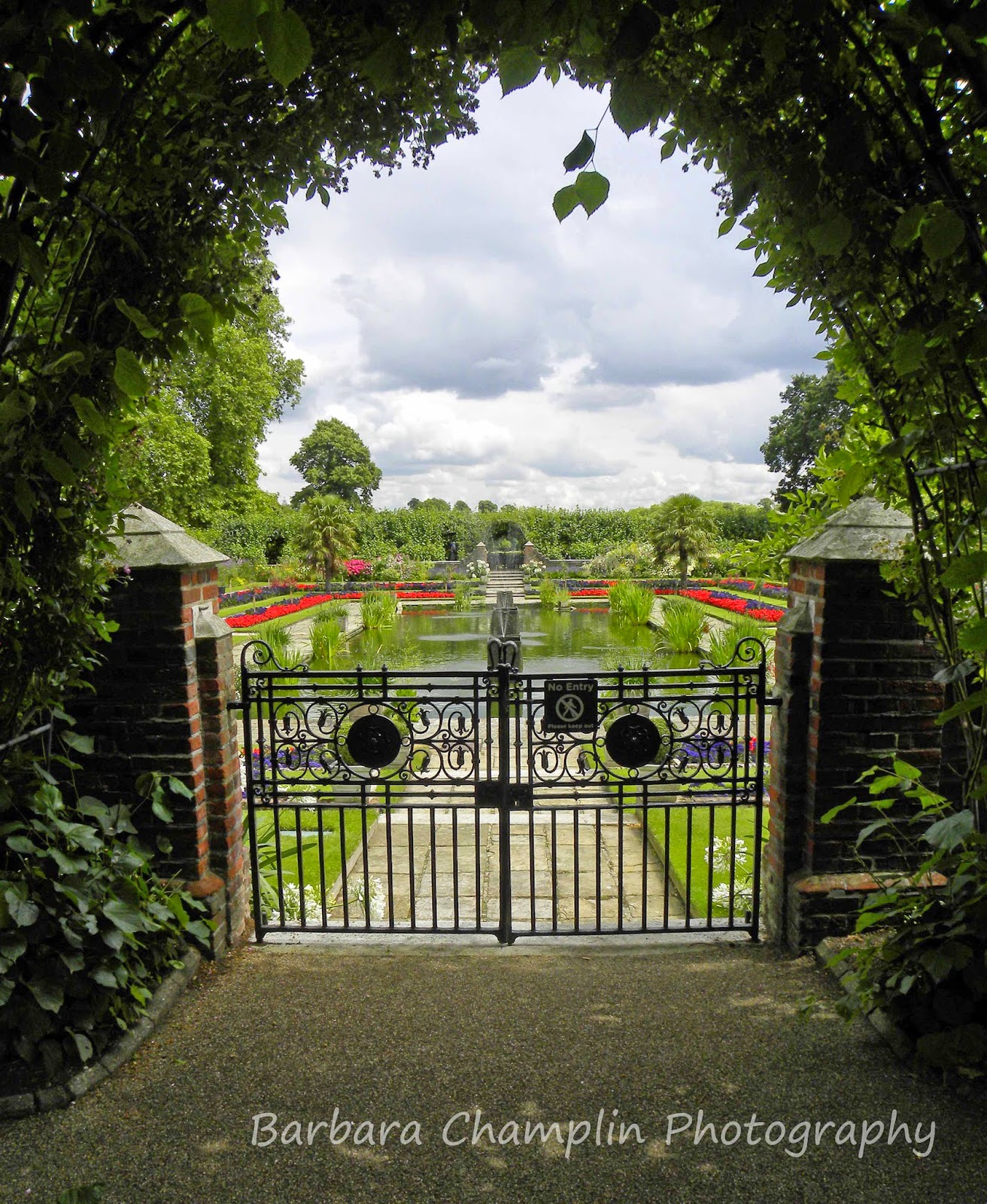 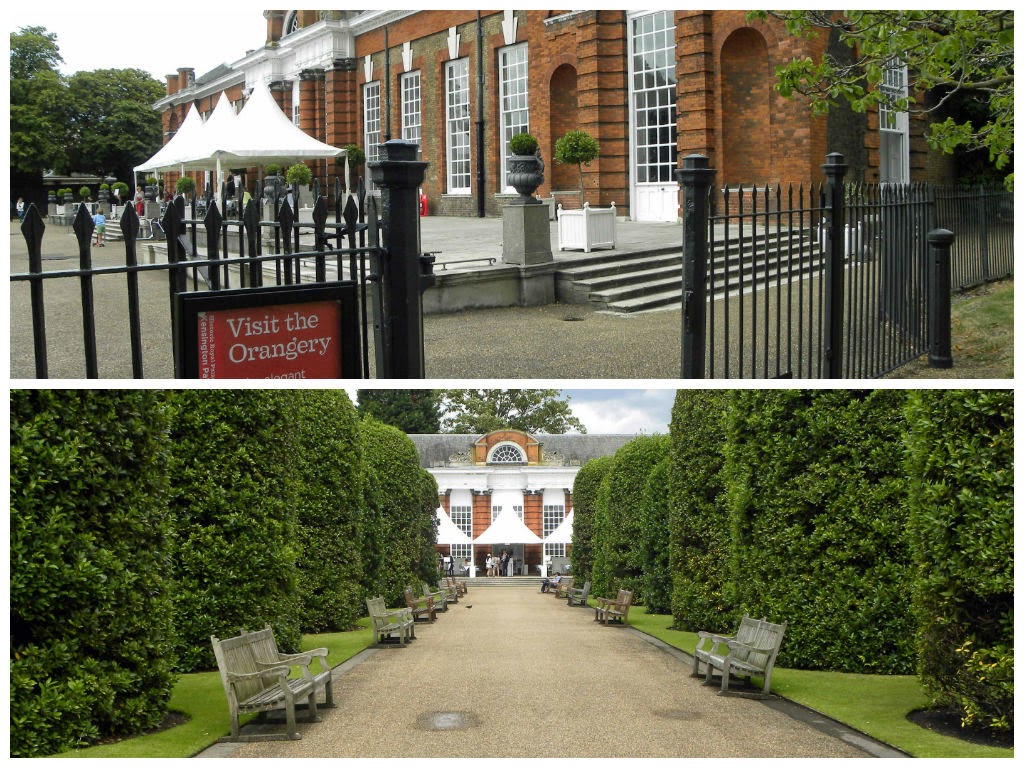 In 1704, Queen Anne had the Orangery built to protect her citrus trees from the harsh
winters. It also served as an elegant entertaining space. 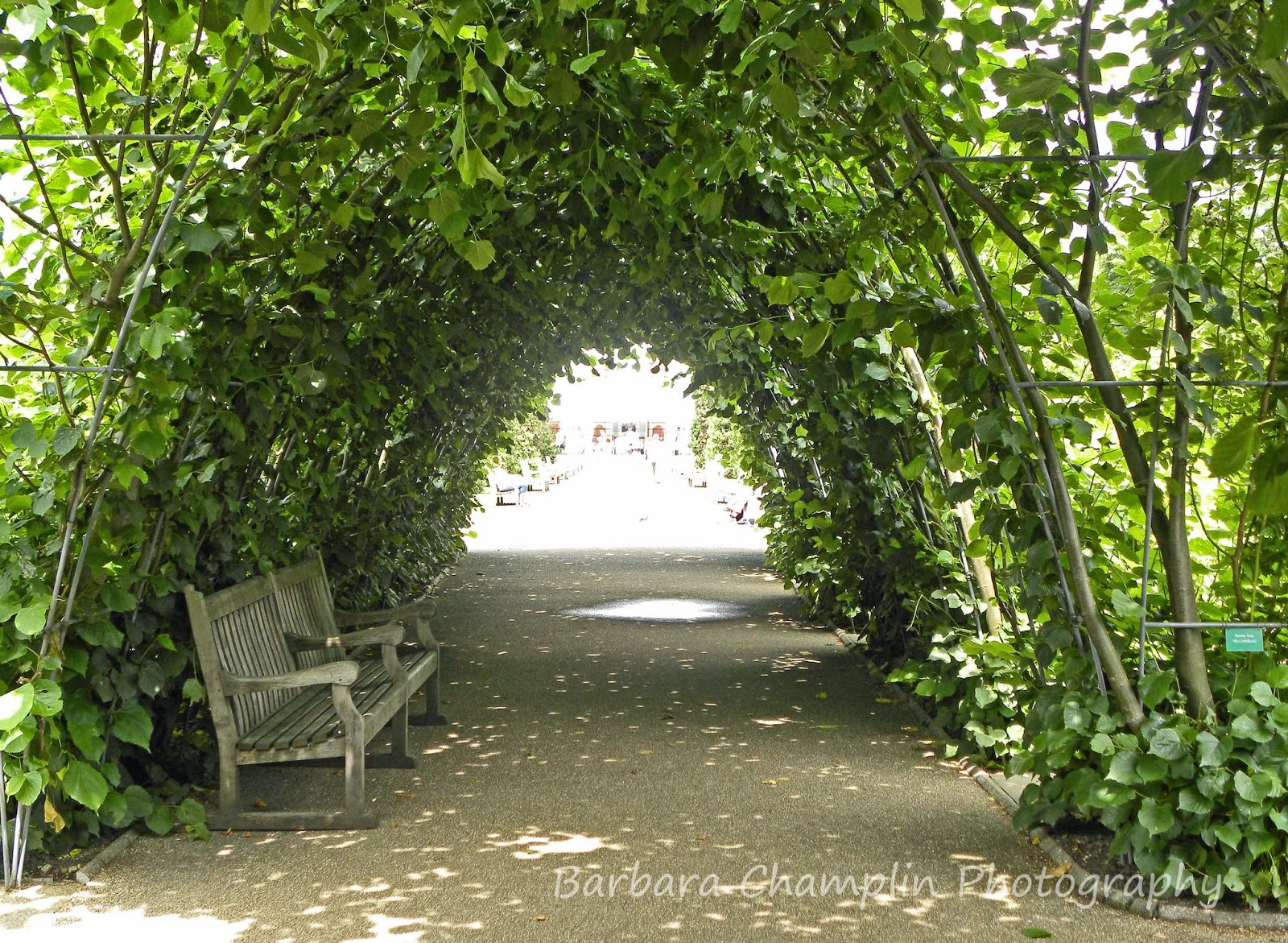 The Palace gardens are surrounded
by a leafy arbor, allowing the
royals (and me!) to stroll in shade and comfort. 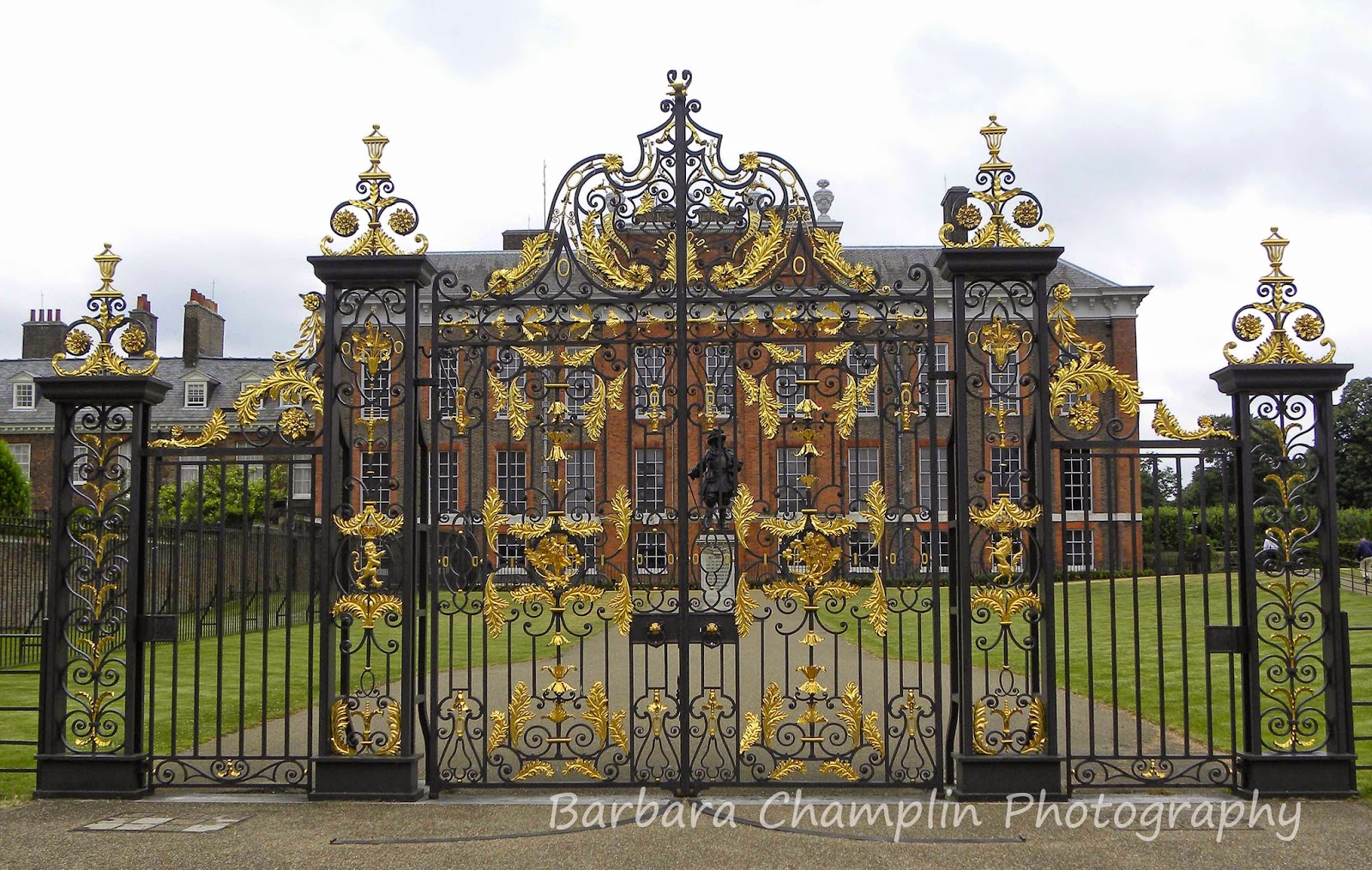 One side of the Palace. Will and Kate's residence is on the left. 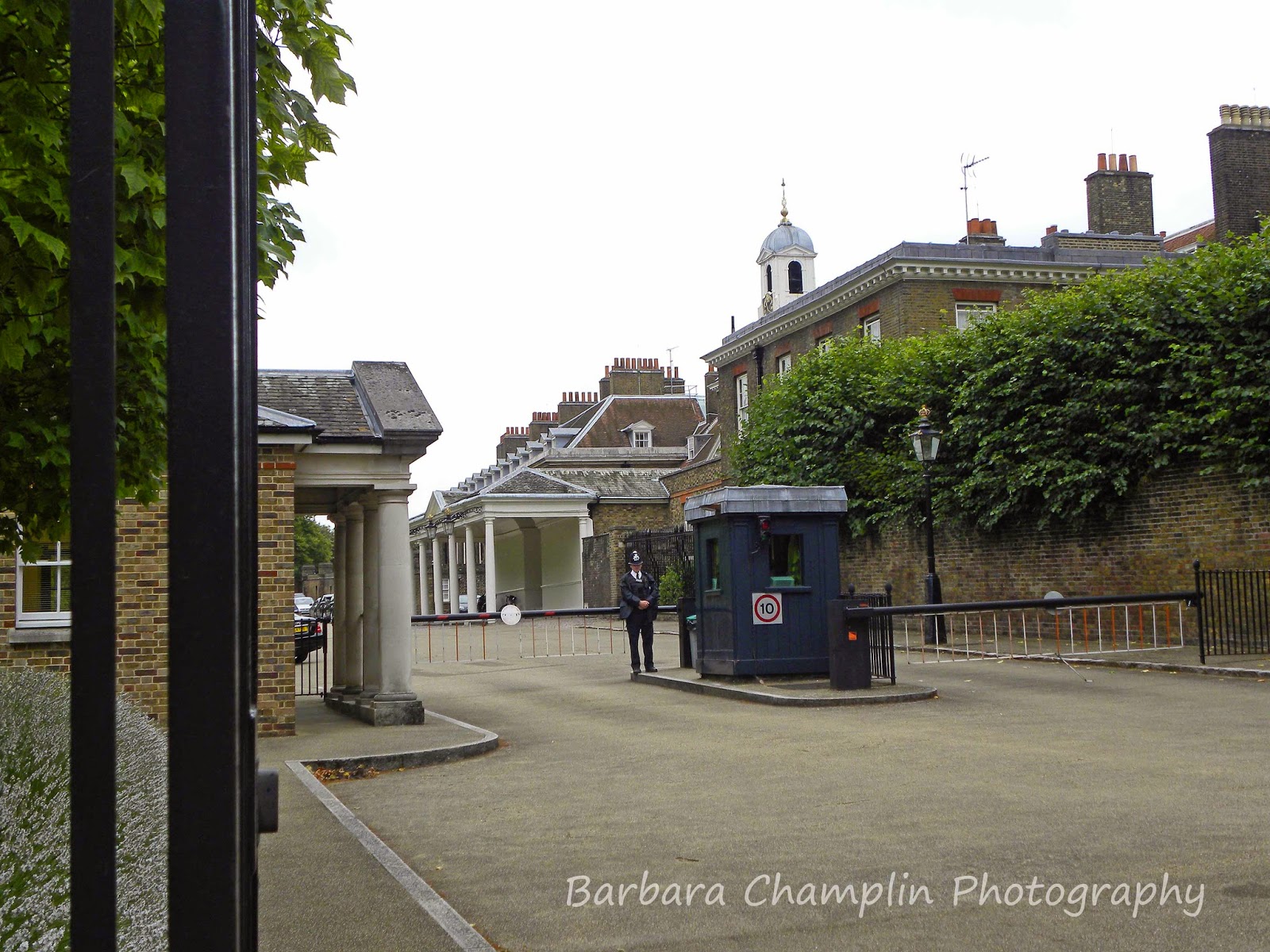 I spent most of my time outside in the lovely gardens, taking time to relax and savor a cup of coffee and a scone in the courtyard. Then, hoping I could catch a glimpse of Will, Kate and baby George, I started to explore the grounds.  Leaving the front entry to the palace (which is now a permanent museum), I wandered to the modest backside to see where the young royals may live. I found it guarded by security. I loitered for awhile, but alas, they must have been napping and I eventually wandered off to see more of the park.
One of the largest parks in London, the royal park covers 350 acres. It actually consists of two parts, Hyde Park and Kensington Gardens, which are seamlessly joined. Even the large lake that snakes through the middle of the parks is divided by name. The half in Kensington Gardens is called the The Long Water, and the lower half is called The Serpentine. To the outsider, it is all just one big beautiful park filled with strolling paths, gardens brimming with flowers, fountains and squirrels so tame you can pet them. 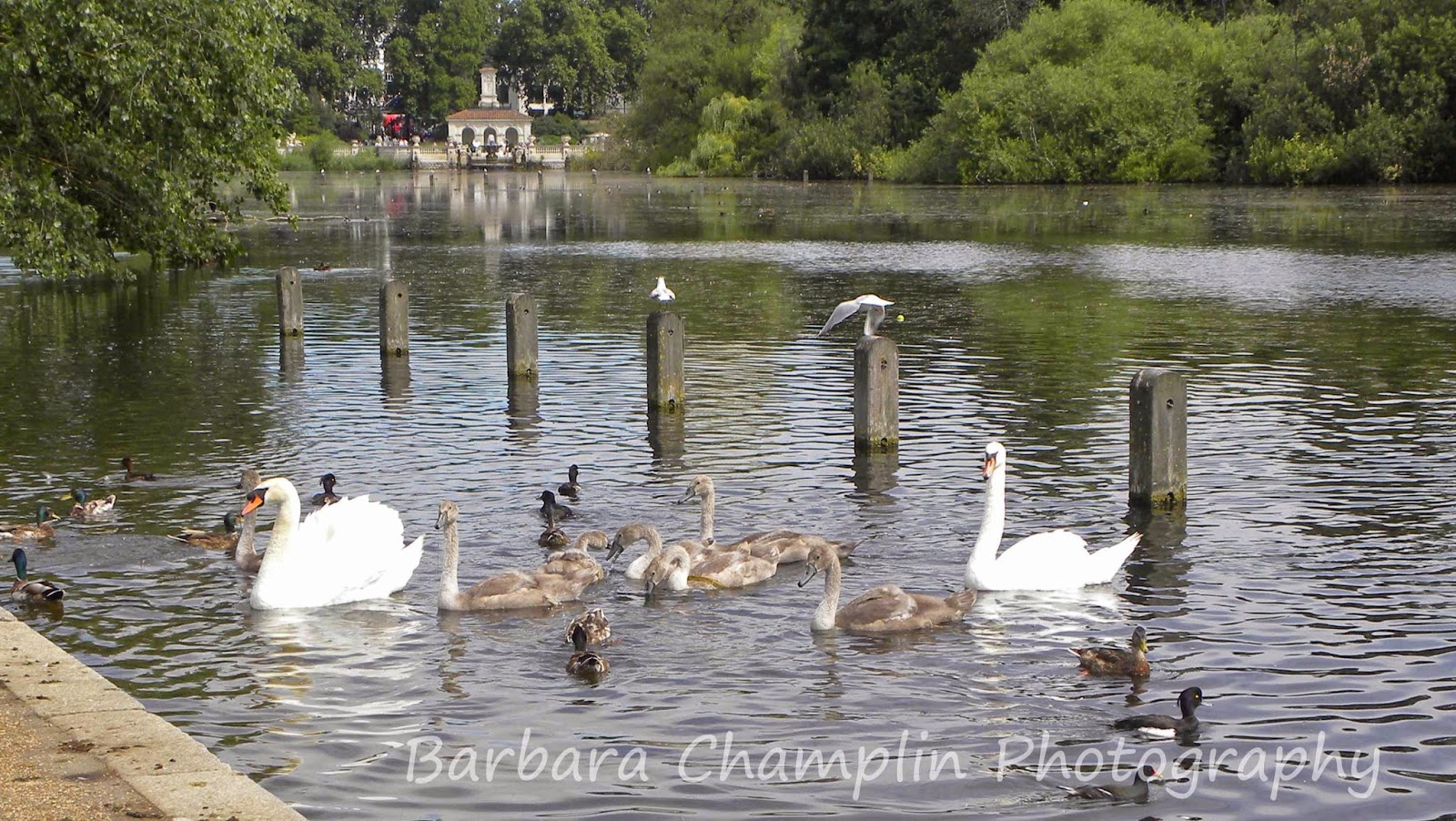 Swan family on The Long Water 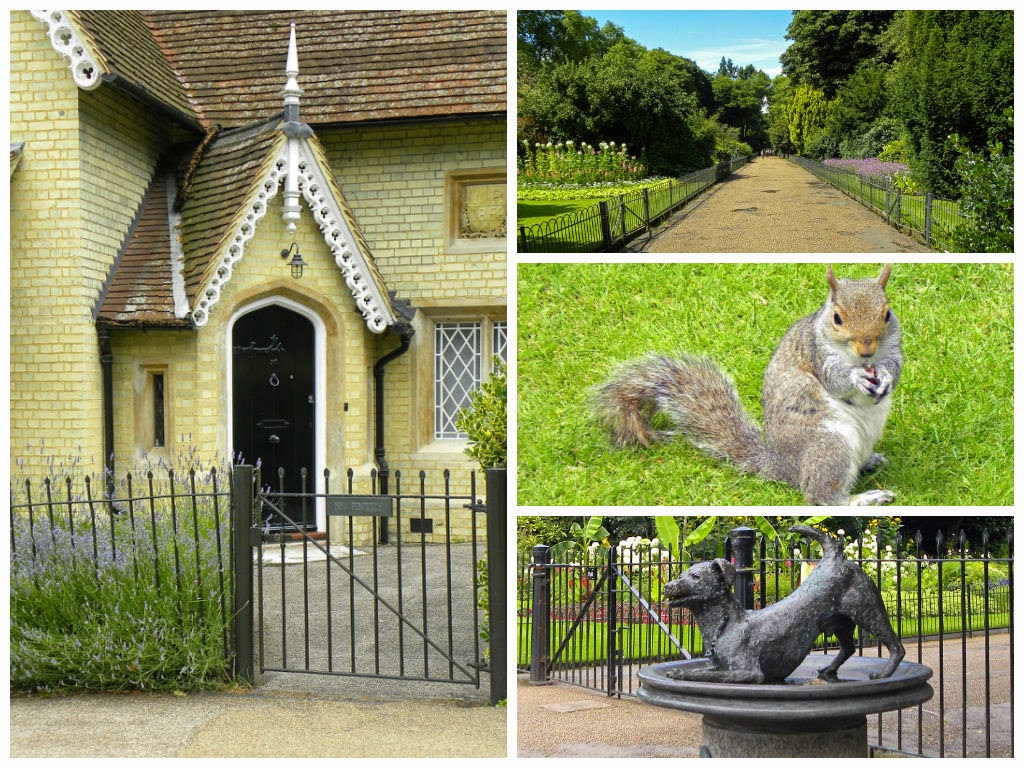 Designed by Prince Albert for his devoted wife, Queen Victoria, the garden is about as romantic as it can get. One of the few royal couples who were truly in love, this gorgeous setting is an inspiration for all lovers.

The fountains at the head of The Long Water 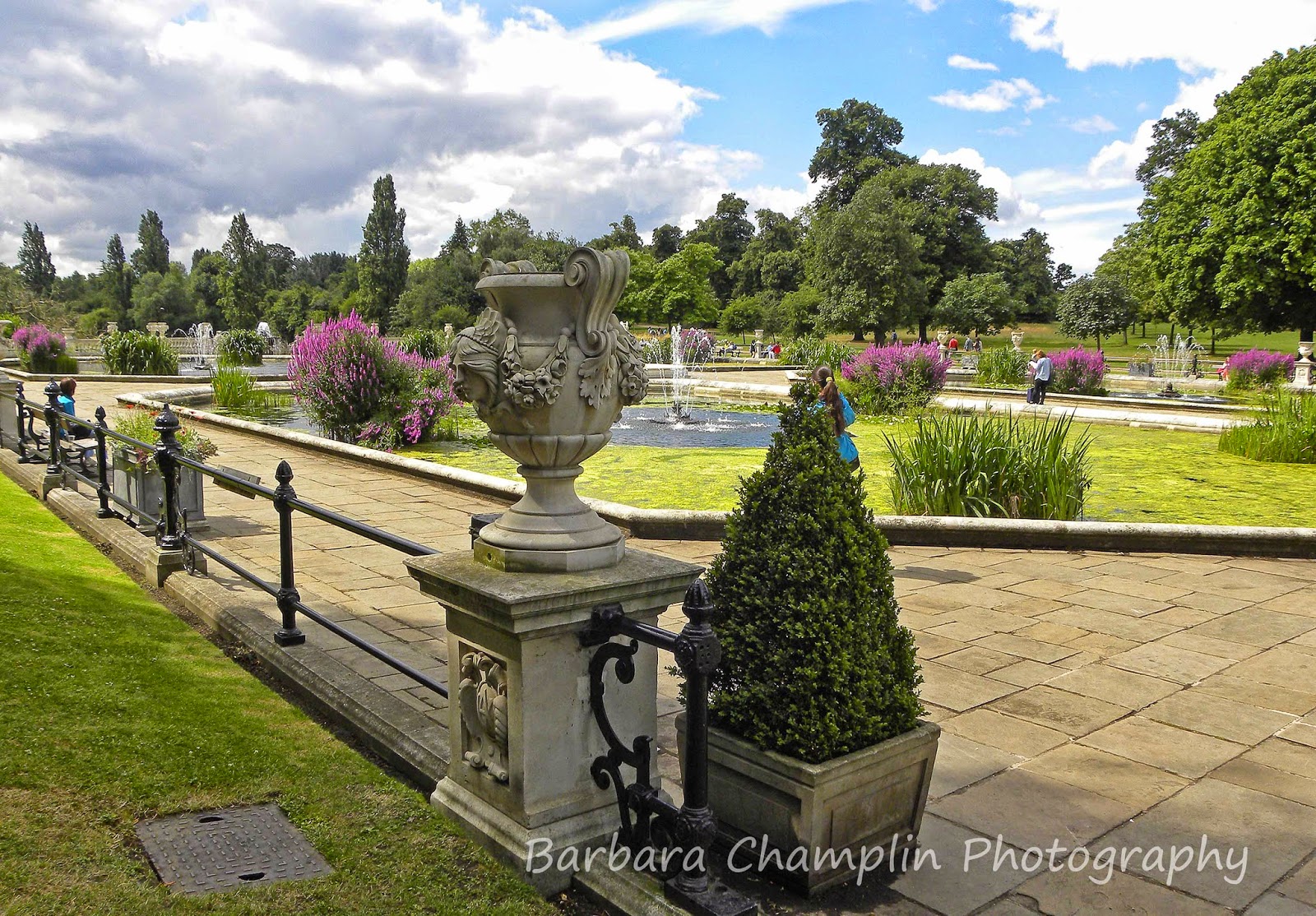 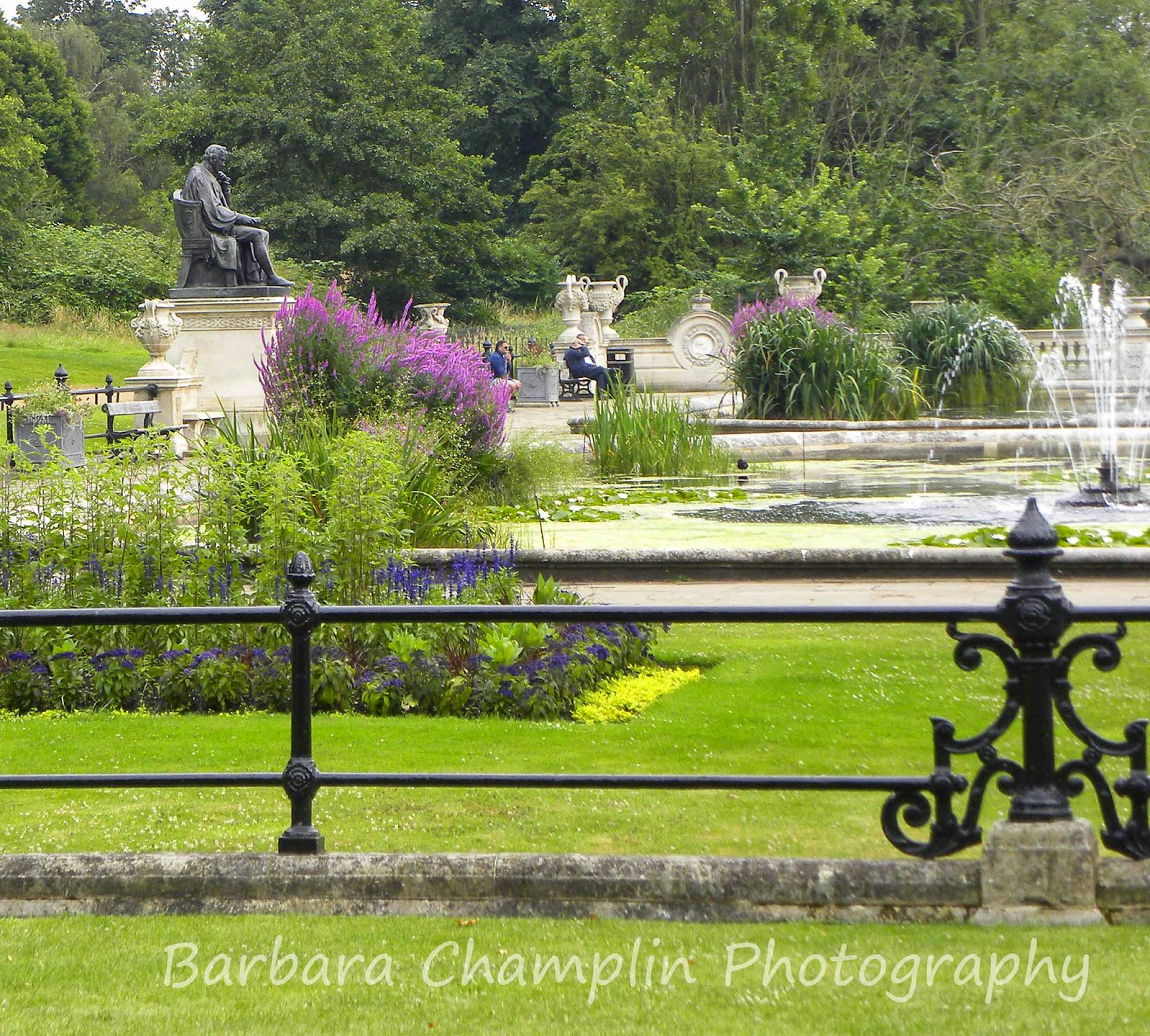 After Prince Albert’s untimely death, Queen Victoria mourned his loss the rest of her life.  This grand memorial is a measure of the immensity of her grief and love. 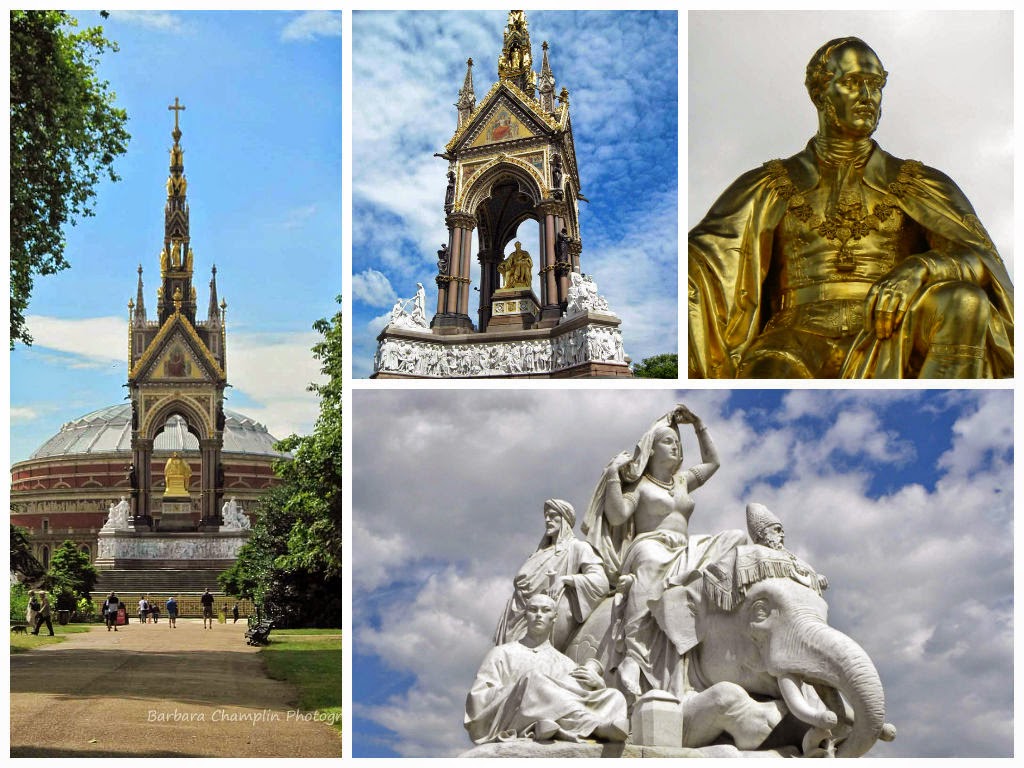 I finally called it a day, but I would be back! There are a ton of things I wanted to see that are located all within walking distance to the park and our apartments. But that's for the next blog!

Next time: A visit to the department stores of Harrods and Selfridges, the Natural History Museum, and the Victoria and Albert Museum.

Good read: "Victoria Victorious" by Jean Plaidy. An historical novel about the life and times of Queen Victoria.

Posted by theworldaccordingtobarbara.com at 1:05 PM