Monticello and Montpelier are a few miles from each other in the
Charlottesville, Virginia area. Map courtesy of  World Atlas.

The entire two weeks I spent in New England, I felt like I’d died and gone to heaven. I visited places I’d only dreamed of seeing but was afraid I never would--places like Martha’s Vineyard, Nantucket, Newport and Washington, D. C., just to name a few. But, thanks to Collette Vacations and my good friends, Pat and Bill in Boston, and Chuck and Paula in Baltimore, I saw everything on my wish list and more. Now, on the last day of this perfect trip, we saved the best for last.

Chuck, Paula and I got up early, packed up the car and drove south from Baltimore, Maryland 120 miles into the state of Virginia to see James and Dolley Madison’s Montpelier and Thomas Jefferson’s Monticello. They are located just a few miles from each other outside of Charlottesville, and together with Mt. Vernon, are the cream of Presidential homes.

I could barely contain my excitement as we drove through the rich Virginia landscape toward Montpelier. Turning off the main highway, the quiet country road seemed to melt away leaving only the awareness of verdant green pastures and vineyards that stretched out for miles. Finally, we pulled into a small graveled driveway and parked our car just a few feet away from a stately Federalist brick home, graced with a white columned portico. It was so peaceful, I could hear the breeze through the branches of the trees, proving once again that it pays to be the first in and the last out. You'll practically have these places all to yourselves!

James Madison’s grandfather bought this Virginia land in 1723 and James' father built the home he called Montpelier a few years later. After James graduated from Princeton and made his reputation as one of the founding fathers and the author of the Bill of Rights, he married the widow Dolley in 1794 and added two wings onto the house they were to share. 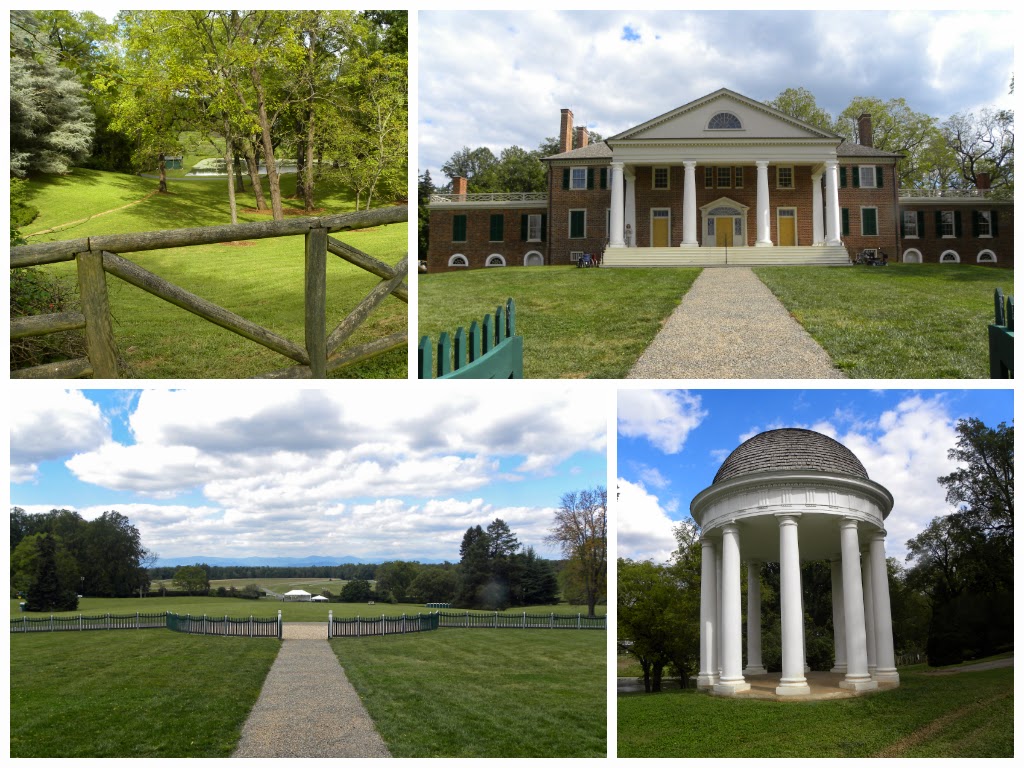 In contrast to the palatial mansions of European royalty, our leading families’ homes are quite modest, and uniquely American. Washington, Madison and Jefferson were wealthy but not ostentatious; their rooms tend to be small and functional rather than ornate. To cut costs at Mt. Vernon, for example, wood siding was made to look like stone and faux painting was used to turn common oak into marble. 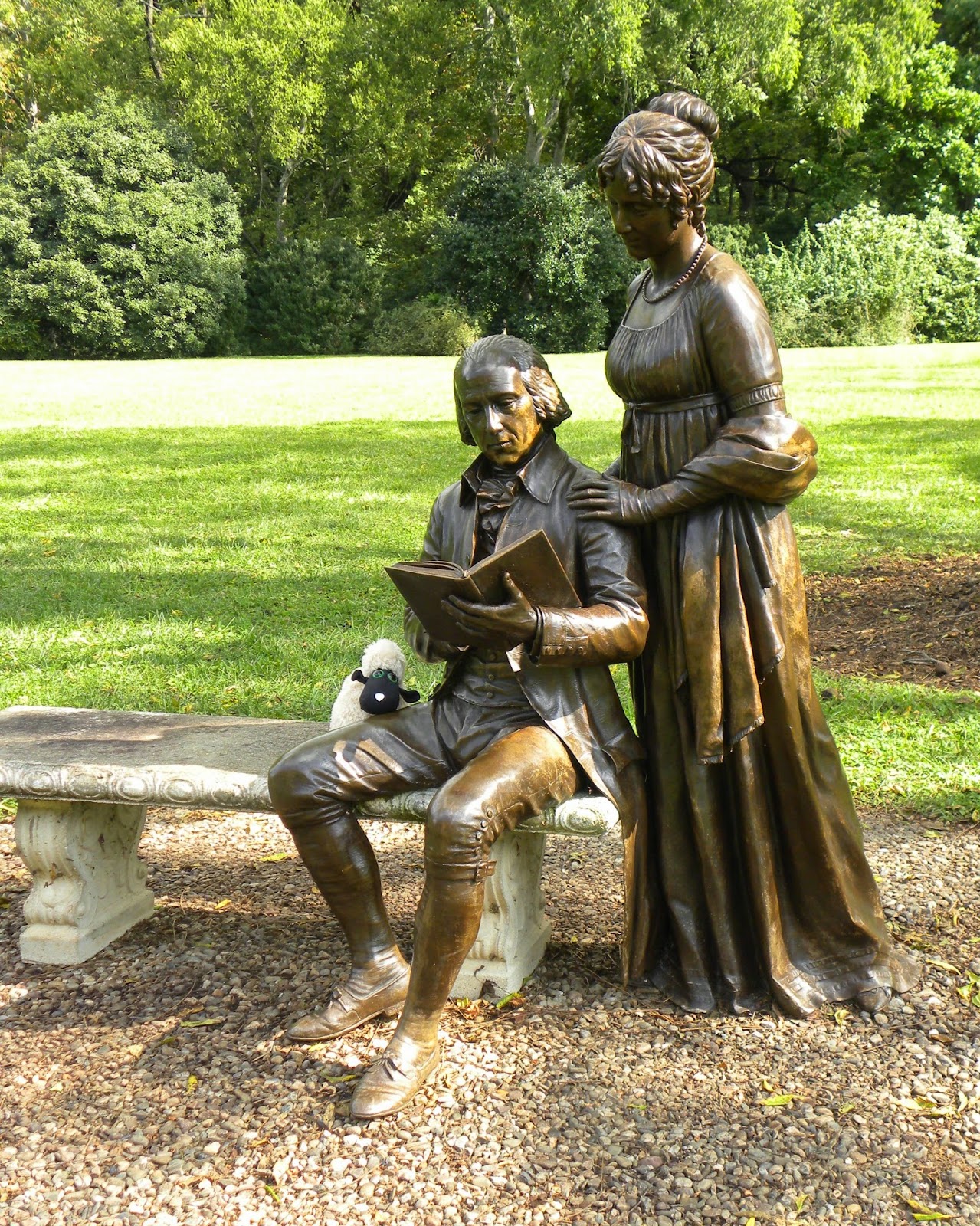 James and Dolley Madison were a powerhouse team in the White House: she, a charismatic social hostess and he, a small and serious intellectual with a powerful vision for his country. Together, they got things done in Washington. Madison was President during the War of 1812 but was out of town when the British attacked the Capitol. Dolley wanted to put cannons in every window of the White House, but when it was set afire, she only had time to grab the one thing she thought absolutely could not be destroyed—the portrait of George Washington. She ordered it taken out of its frame and rolled up, then she and a few servants threw it on a wagon and left the house with just the clothes on their backs. She was a woman I would have liked to have known.

It didn’t take long to tour the home and after admiring the grounds for awhile, we got back into our car and drove to our B & B to have dinner and spend the night. The next day would be full. We planned to visit Monticello and then drive home.

Monticello, Home of the Third President of the United States, Thomas Jefferson

Mt. Vernon and Montpelier, built originally by Washington’s and Madison’s fathers, started out as modest saltbox style homes. After acquiring the properties, Washington and Madison expanded the little houses by adding wings to both sides giving them a sort of stair step design.  Monticello, on the other hand, was designed and built by Jefferson himself, and is a magnificent home. 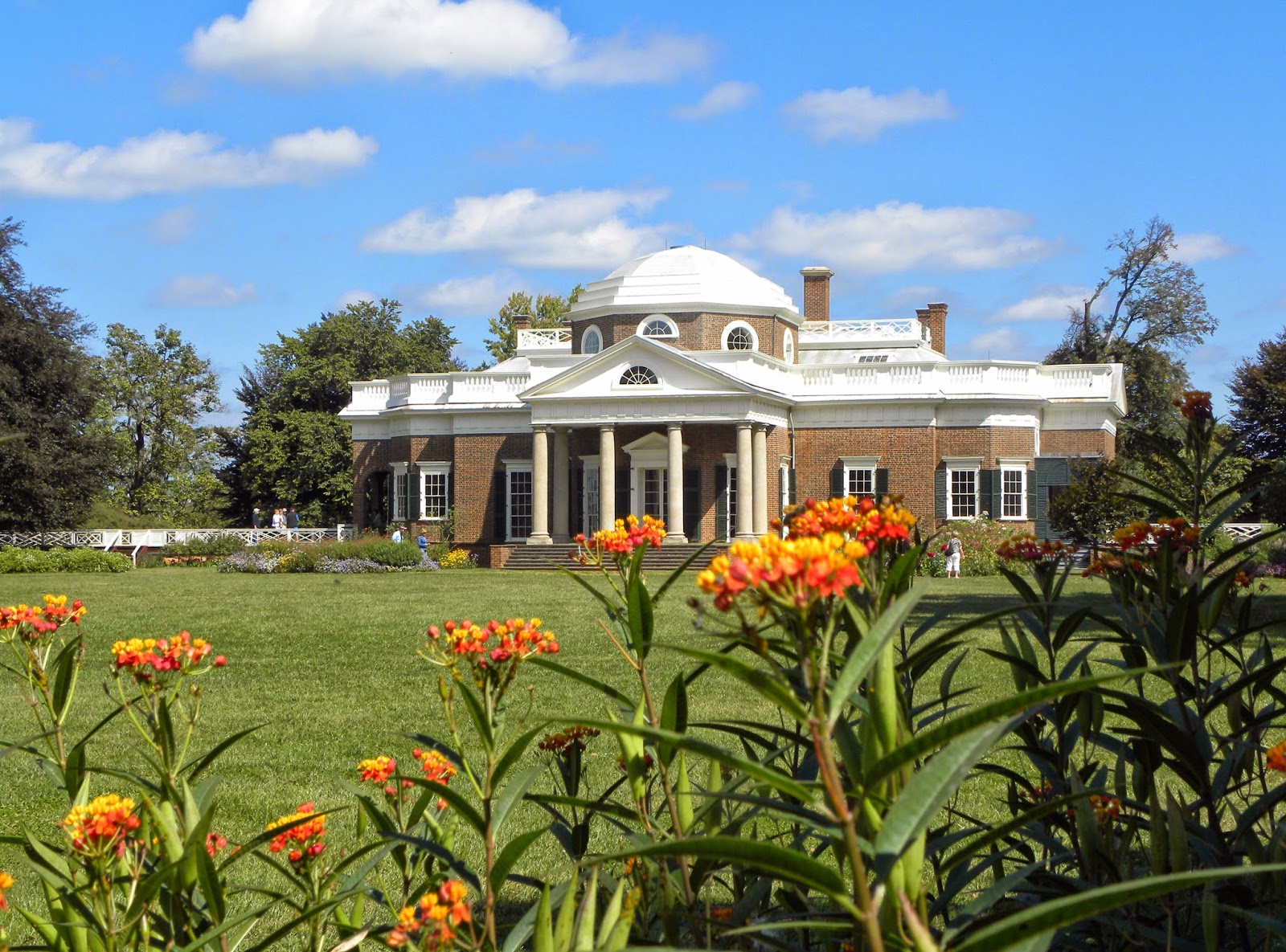 This is actually the back of his home and the most picturesque.

Beautifully preserved and filled with Jefferson’s possessions, Monticello is alive with his presence, especially in his study and bedchamber.  His desk is surrounded by his famous inventions: the Polygraph, a machine that simultaneously made copies of what he had just written, and a book turntable he designed so that he could read several books at the same time (the original multi-tasker). And, giving us a glimpse into his active mind, sandwiched in-between his study and sitting room is his bed in an open sided alcove allowing him quick access to his desk at any hour of the night. 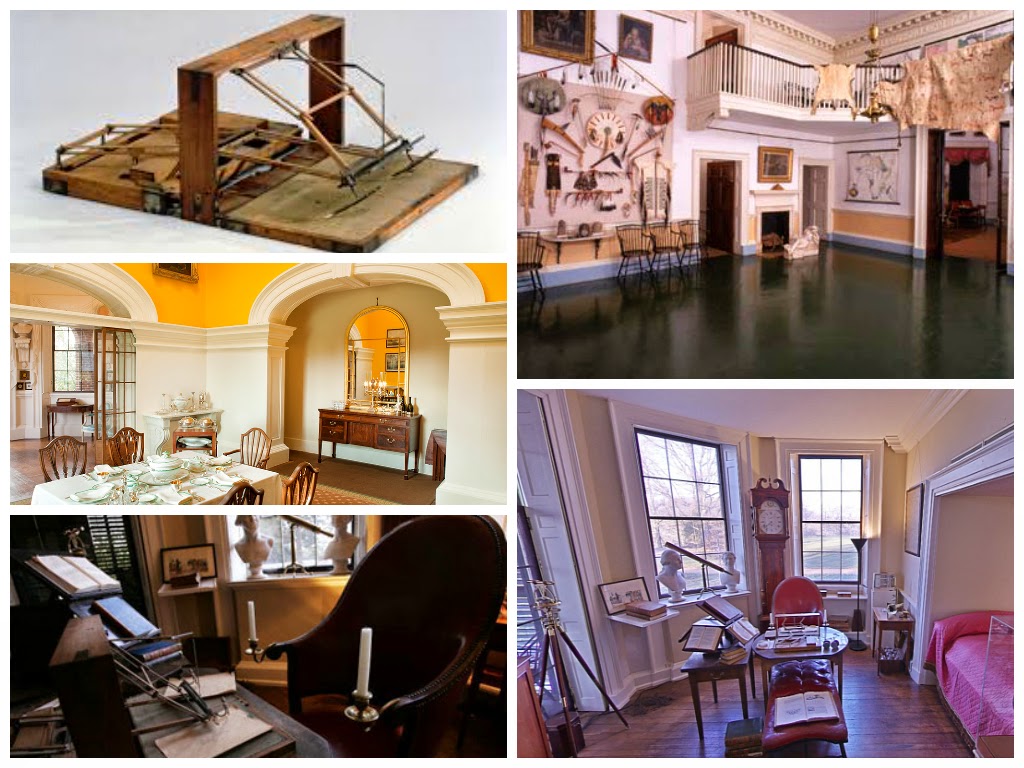 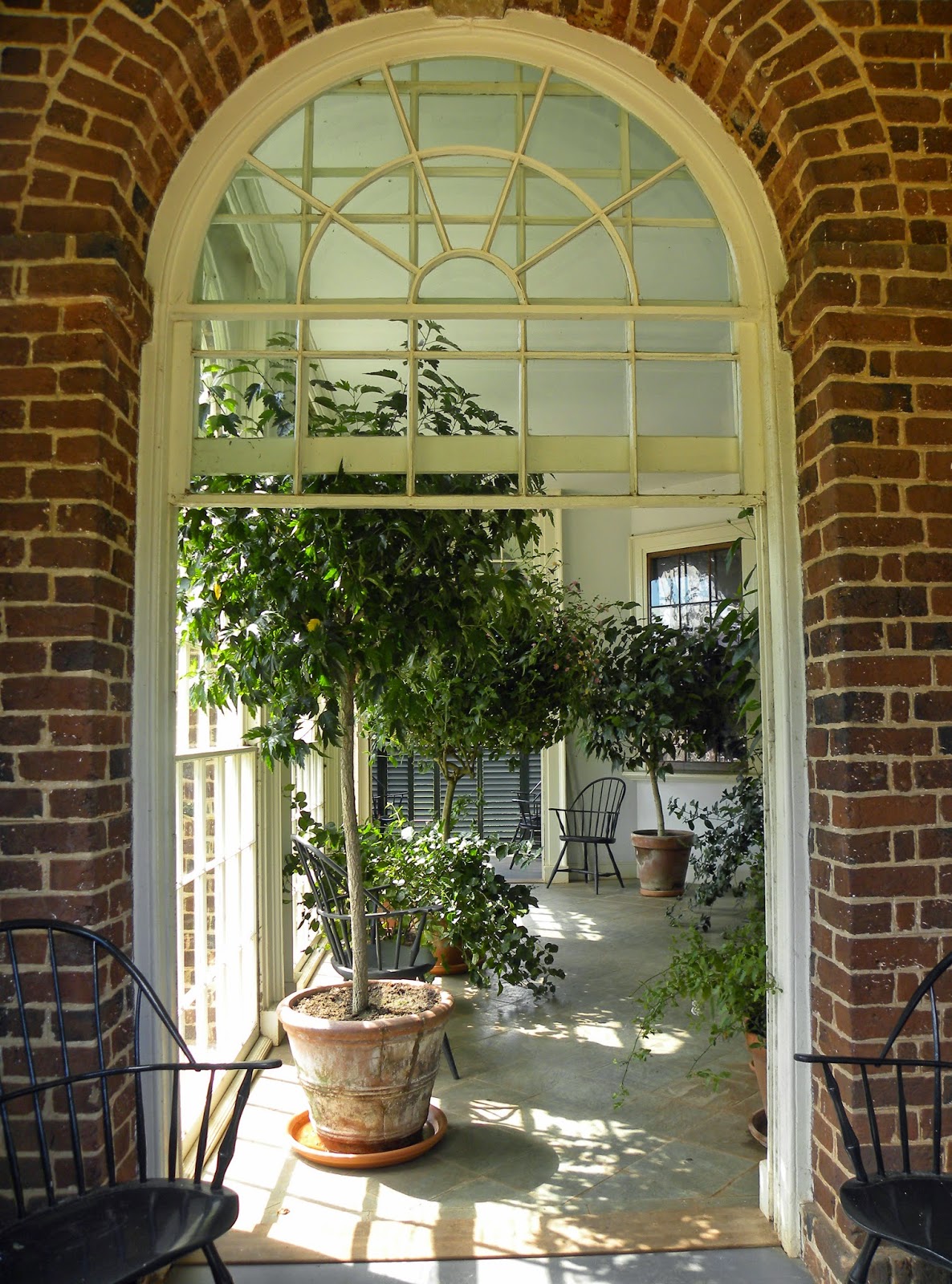 Jefferson designed his home with large windows that not only let in the light, but brings the beauty of the gardens and lawns inside. The interior of the home is also filled with light thanks to several well placed skylights, giving it a comfortable and inviting warmth. I especially loved the dining room. Facing north, he designed it with floor to ceiling windows and painted it a sunny yellow making it the most pleasant room in the house.

As if to show where his heart was, the entry way is filled with his collection of Native American artifacts given to him by Lewis and Clark when he was President. Along with large maps of Virginia and the world are fossil bones and skins displayed as if it were a natural history museum. The home has many formal rooms for entertaining, but I absolutely loved the unpretentious quality of the entry way. Jefferson was a man of many sides. 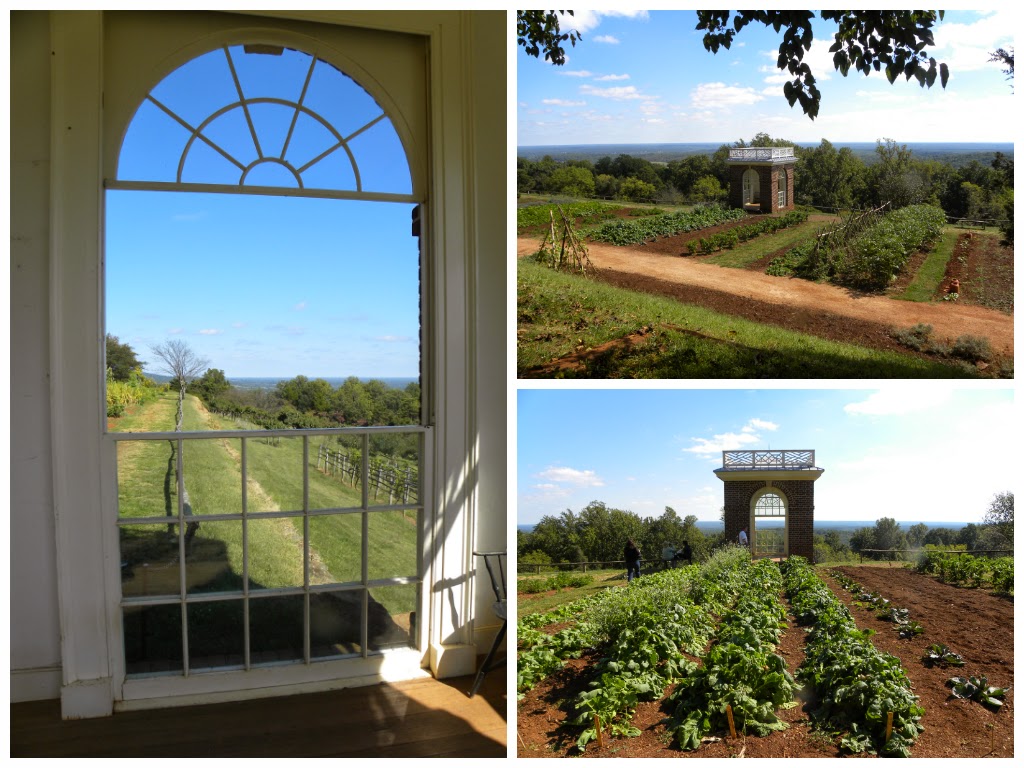 The Two-Ton Elephant in the Room, Slavery

As much as I wanted to see these historic homes, I was distressed by what came with them: slaves’ quarters. I hadn't realized that along with being Presidents of the United States, Washington, Jefferson and Madison were first and foremost southern plantation owners and as such owned slaves. Although unpleasant, there was no attempt by the docents of these homes to gloss over the subject. They discussed the issue of slavery openly and the consensus was that owning slaves was unfortunately an acceptable practice at the time.

Besides the question of why slavery existed in the colonies at all is another subject, but why did these particular men continue to own slaves? These men, who were on the forefront of modern thought, who fought for freedom from tyranny and the right to life, liberty and the pursuit of happiness? Had they given any thought to the moral implications? Could they have possibly been unaware that Europe and England had begun to abolish slavery years before? However they rationalized owning slaves before the war, as Presidents they could no longer avoid the fact that slavery was wrong, thanks to being enlightened by men like the Marquis de Lafayette.

Sadly, at the same time, there were louder voices demanding the continuation of slavery as an economic necessity. Feeling conflicted and powerless, each of the three Presidents decided it was too divisive and complex an issue to solve. To his credit, Washington determined not to perpetuate his part in it and freed his slaves in his will. Madison, although knowing he should, was unable to free his slaves over concern for Dolley’s financial welfare after his death. Jefferson was the enigma. Although abhorring slavery all of his life, he also feared a large-scale race war if all slaves were freed, and in the end, did essentially nothing. It was too big a can of worms and they all left it to future generations to deal with it. 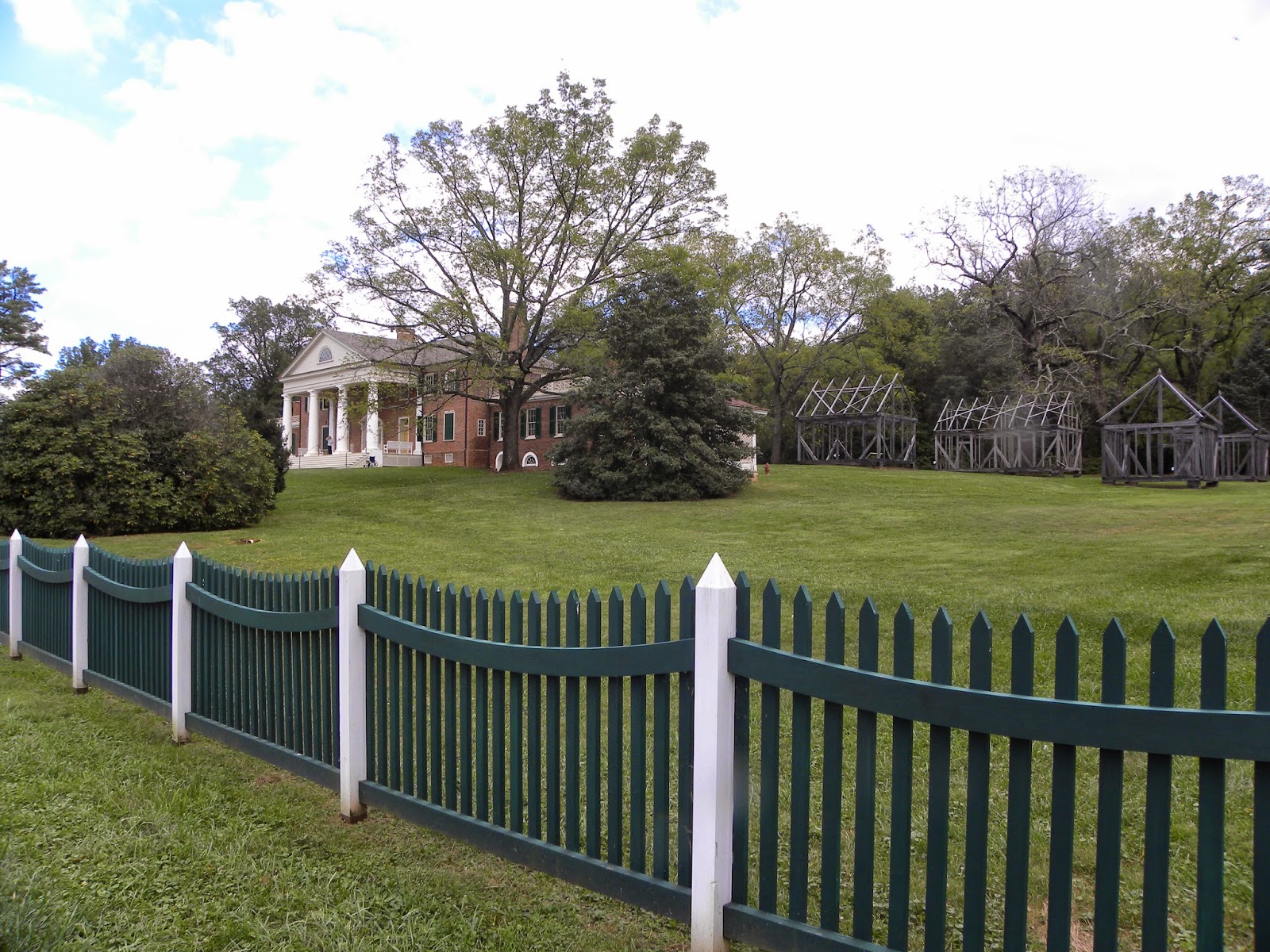 A Great Place to Stay When You Are in the Area…. 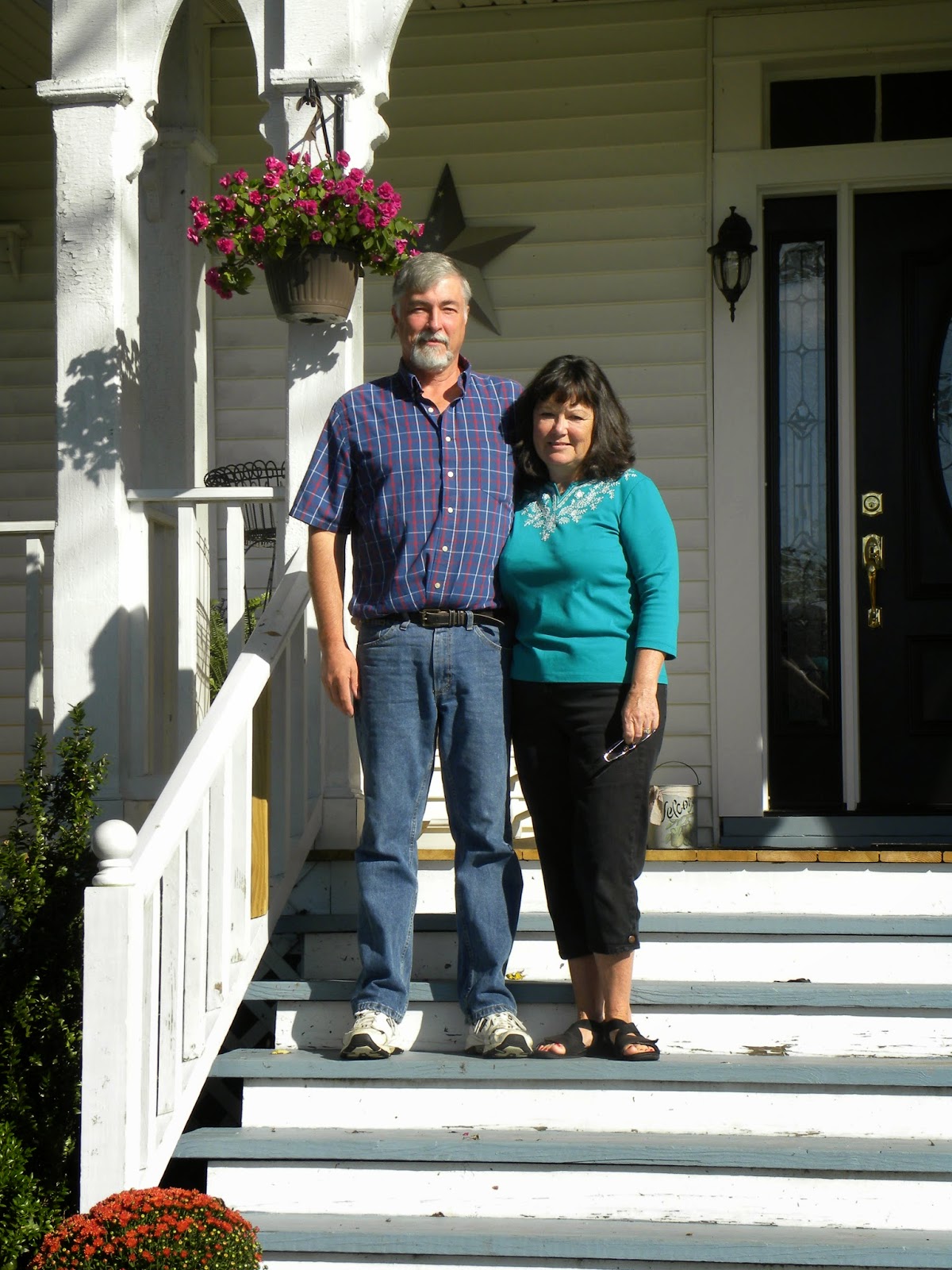 Before we ventured down into Virginia, Paula made reservations for us at a B & B called the Orchard House located in Lovingston, nearby to Monticello and Montpelier. Owned and operated by Richard and Deb Bulissa, it’s a charming old Victorian farm house nestled on top of a grassy hill overlooking a thriving vineyard. At the time we were the only guests, and after we settled in and Richard and Deb disappeared, it felt like we owned the place. We had the run of the house and felt free to help ourselves to the fresh cookies and drinks that seemed to appear out of nowhere, put our feet up and watch whatever we wanted on TV. 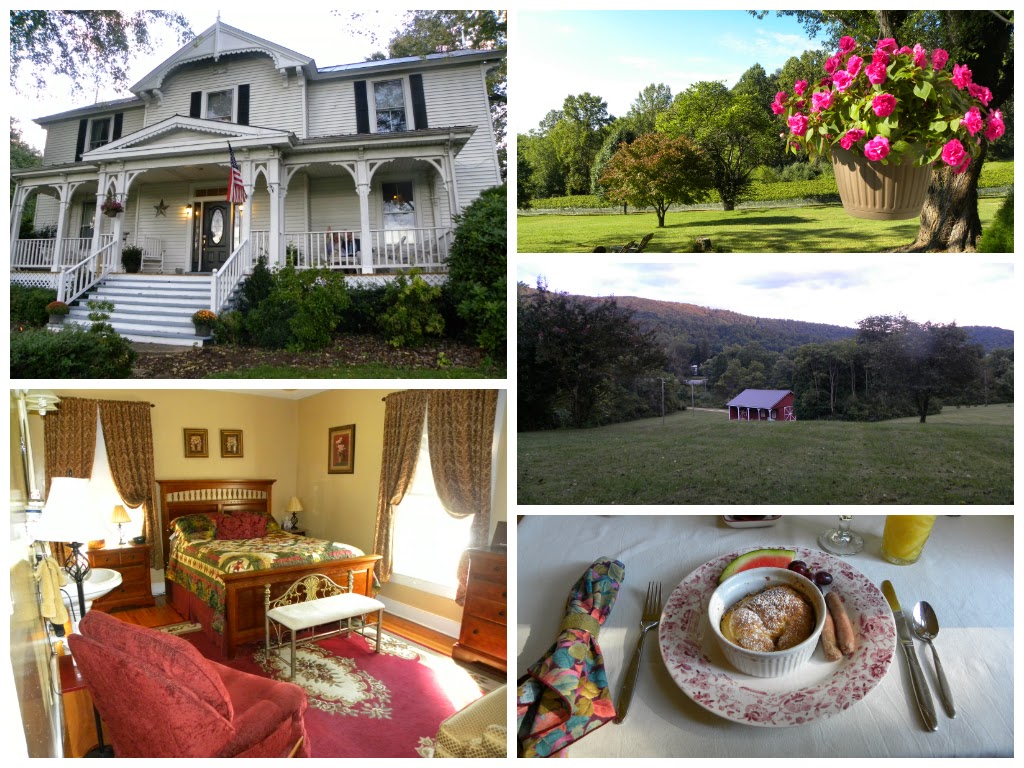 Orchard House, a great place to stay while visiting Monticello and Montpelier.

The next morning, Paula and I got up early to enjoy the cool, crisp air. We took our hot steaming cups of coffee out onto the front porch, snuggled into the roomy rocking chairs and quietly enjoyed the green rolling Virginia hills blanketed by morning mist. Soon, breakfast was served, consisting of a divine homemade baked apple croissant, framed with fresh fruit and sausage. A delicious stick-to-your-ribs breakfast, it kept us satisfied all the way back to Baltimore.

Driving back was bittersweet. I’d been on a tremendous high the last two weeks, but now it was time to go home. To keep myself from feeling too sad, I began to plot my next adventure, which I hoped included more fun experiences with good friends. It truly doesn’t get any better than that.

Thanks, everyone, for a trip I will never forget!

**Good Read:  "A Slave in the White House" by Elizabeth Dowling Taylor. Included in the book is the entire text of "A Colored Man's Reminiscences of James Madison"  written by Paul Jennings in 1865.

Next time: Hearst the Hoarder and His Castle

Posted by theworldaccordingtobarbara.com at 3:41 PM