BOSTON AND THE FREEDOM TRAIL 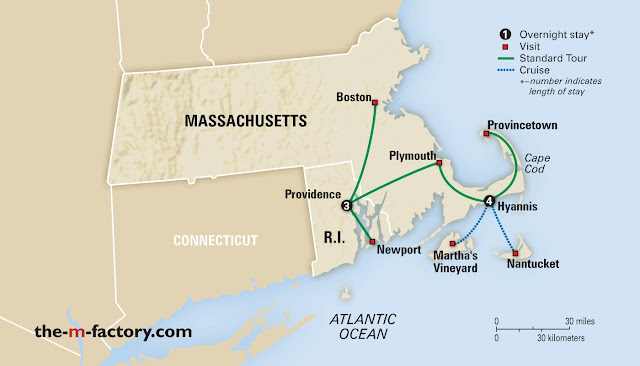 It’s day number three of our “Islands of New England” tour and we’re headed for Boston.

Wait a minute. Is Boston an island? Well, technically no. However, the town was founded on land originally attached to the mainland by such a small isthmus (called The Boston Neck) that it might as well have been an island. General George Washington and his troops easily trapped the British on it in 1776 by blasting an impressive number of cannon at them from the mainland. The British fleet finally gave up, deserting Boston to sail on down to New York giving the Rebels and important victory. Today, Boston is more firmly attached to the mainland due to landfill, “The Neck” having gotten much thicker over the years.

It's hard to turn around in Boston Proper without an iconic reminder of what an important role Boston played in the early days of our fight for independence from Britain. Events like the Boston Tea Party, Paul Revere’s “midnight ride”, the battles of Lexington and Concord, Bunker Hill, the Boston Massacre, and many other defining milestones of the American Revolution occurred around Boston. When I was in school, these were just dry facts from a distant time, but when I stand in the same space where these historic events took place, the “facts” become vividly real to me. It is why I love to travel. It opens up all new worlds for me and I always come home with an insatiable curiosity to know more. 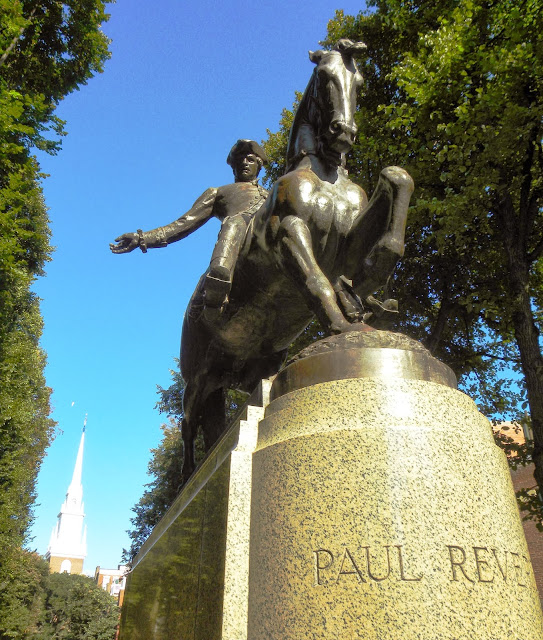 Paul Revere's statue with the Old North Church steeple in the background.

Our first stop in Boston was just such a place, the Old North Church. Here we met Leslie, our Boston guide for the day, who began our tour by reminding us of the significance of the church. “I’m sure everyone remembers Paul Revere’s famous midnight ride?  Tradition has it that he galloped here on the night of April 18, 1775 to send a signal to alert the Colonial militia that not only were the British invading but how. The signal required Robert Newman, sexton of the church and Sons of Liberty Capt. Pulling to scramble up eight stories of this steeple, the tallest in Boston, to briefly shine two large lanterns. Using two lights instead of one signaled that the British were coming to Lexington and Concord by sea across the Charles River and not by land. This fateful warning became a turning point in the colonies struggle for independence." 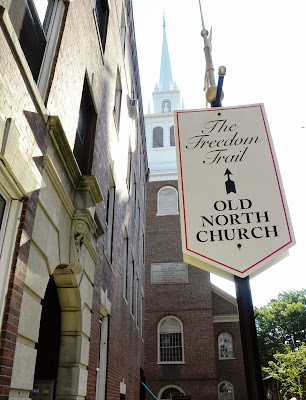 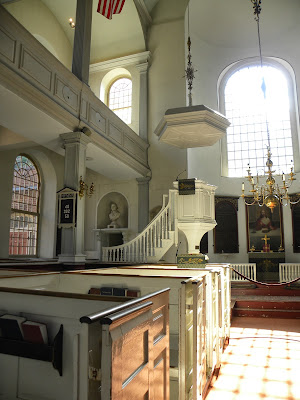 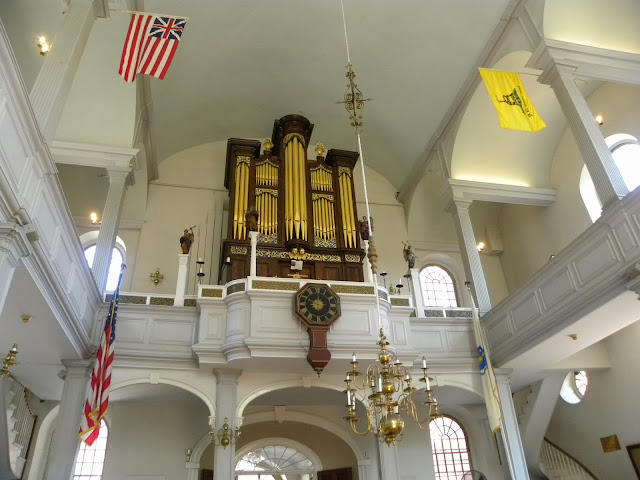 Old North Church built in 1723, the oldest church in the city, is still in use. 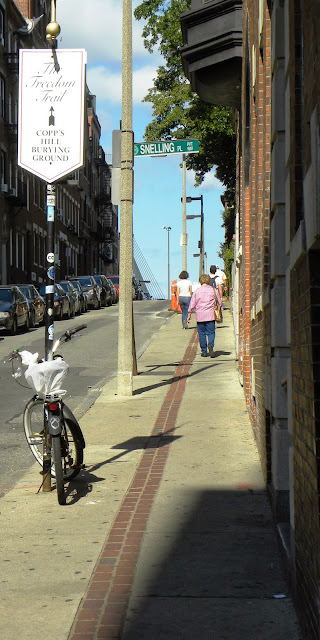 Exiting the front of the church, Leslie led us across Salem Street to follow the Freedom Trail. Along the way she explained, “The Freedom Trail was created in 1951 to save sixteen important landmarks of the American Revolution. They include The Old North Church we just saw, Paul Revere’s home, The Old State House (where the Boston Massacre took place), Faneuil Hall and the USS Constitution. We will see many of them today. This red brick line we’re walking along is part of the three mile walking trail that leads from one historic site to the next.”

(A narrated guided tour along the Freedom Trail should be a must on every visitor’s agenda. Just think of all that rich entertaining history in a short three mile walk!)

We continued to walk uphill on Hall Street towards Copps Hill Burial Ground, another Freedom Trail site. Perched on one of the highest hills in Boston, it has a grand view of the harbor. Because of its vantage point, the British army used it to blast  their cannons at Charlestown across the Charles River during the battle of Bunker Hill in 1775. Many famous Americans are buried here including Robert Newman, the Old North Church Sexton and the builder of the USS Constitution, Edmund Hartt. 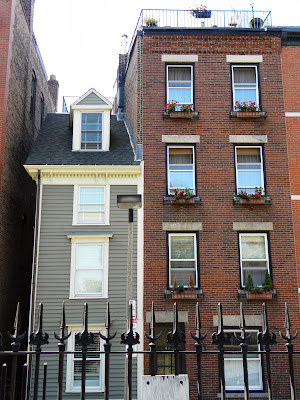 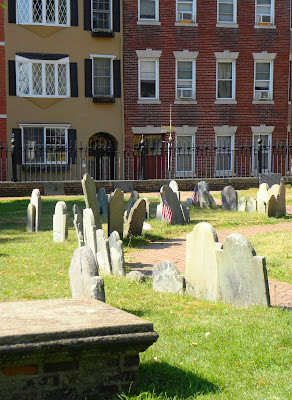 Across from the cemetery is the narrowest house in Boston, only ten feet wide. Leslie told us that it was built to spite a brother and block his view of the harbor. Gee whiz. Couldn't he have just short-sheeted his bed or something?

Back on the bus, I had the “cat bird” seat next to Leslie while Josef drove us through the streets of Boston for an overview of the city. Erudite but soft spoken, I later learned that only the first few rows were able to hear her witty narration and asides while I felt like I’d gotten a private tour. At least she was a definite step up from the last tour guide I had in Boston a few years ago. That lady spoke like a New England flounder fisherman and had chin hairs so long even John Adams would have been envious. 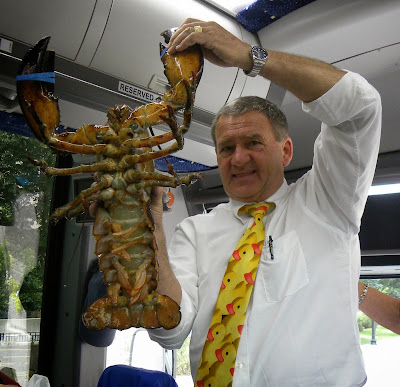 Josef, our zany driver, parked briefly by the wharf, jumped out of the bus and
"borrowed" this whopper to show us what a Boston lobster looks like.
That's about a $100 meal without the butter! (Notice his Boston "duck" tie.)

We had spectacular weather on that sunny Sunday afternoon and it seemed that all of Boston came outside to enjoy it. We passed many spacious parks filled with picnickers, joggers, families playing with their children and street fairs. It felt like a friendly, alive place; a town you wouldn’t mind calling home. I liked the energy I felt. I liked how the historic landmarks co-existed with modern buildings, together forming a vital part of the city like a multi-generational family.  We drove passed “Cheers” where “everybody knows your name”. And, you know, I could believe it!

We also drove by Harvard University and the students looked like students everywhere, young, serious and full of potential. We gawked at the towering structure of Fenway Park as we passed; little knowing that history would soon be made there in a few weeks by the Red Sox winning the World Series! 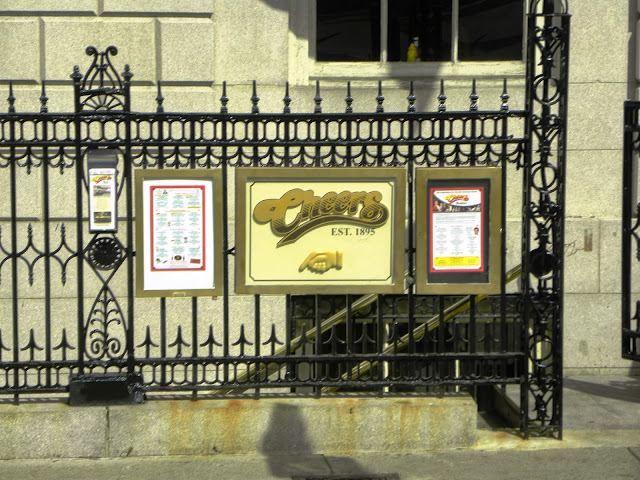 The real "Cheers" made famous by the TV show of the same name.

For lunch, we stopped downtown at Quincy Market in the heart of old Boston. A few of us had lunch at the “Oldest Restaurant in Boston”—the Ye Old Union Oyster House. They’ve preserved the original Colonial décor so well, I felt like I would run into Ben Franklin at any moment! 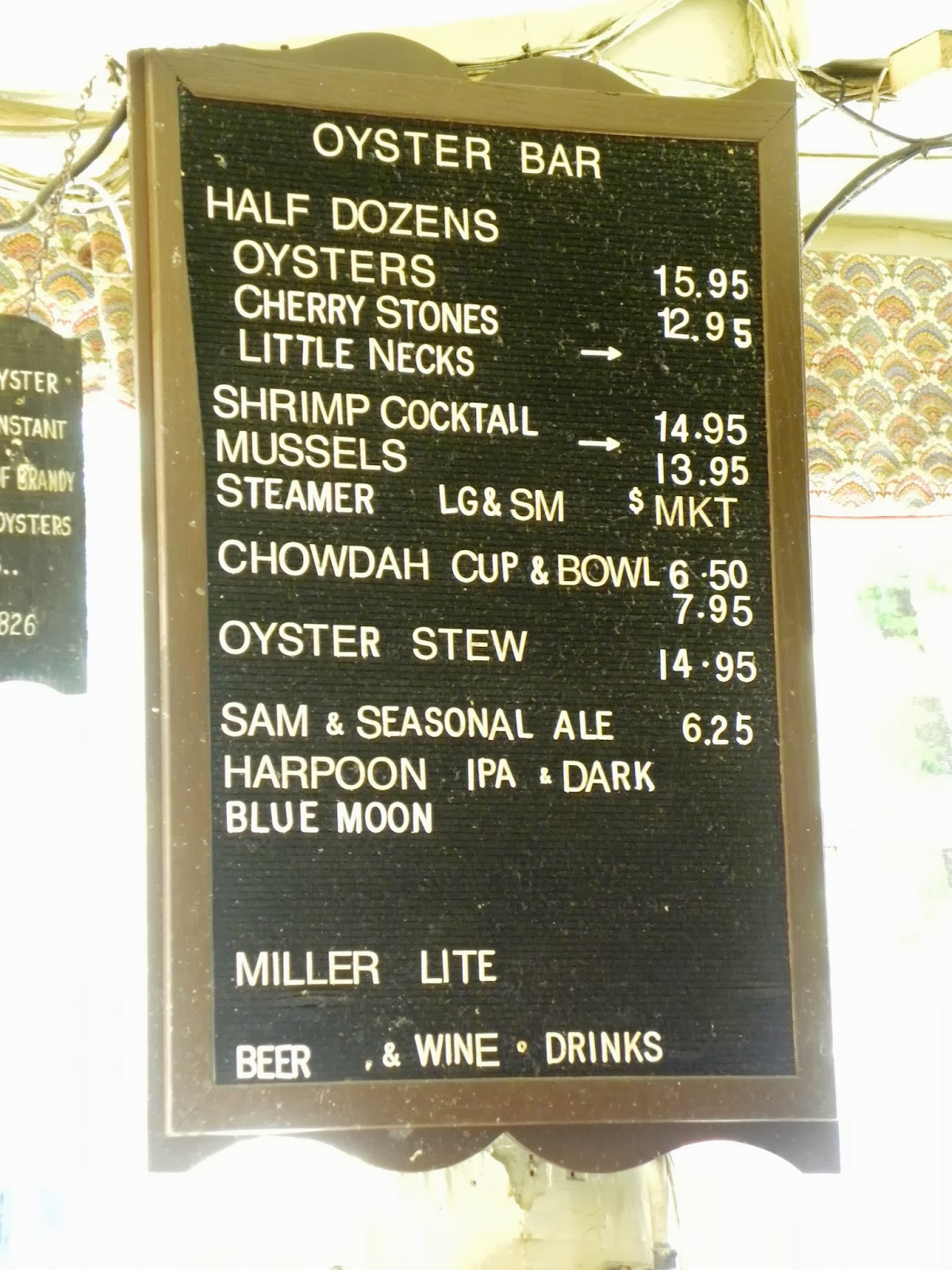 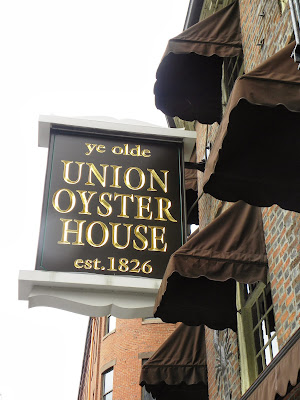 I love how they spelled "chowder" the way it

is pronounced in Boston: "chowdah"! 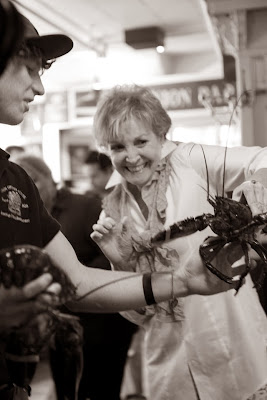 They let me hold one of their live lobsters! 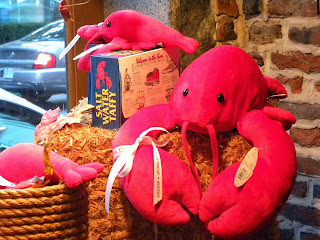 After a hearty stick-to-your-ribs lunch of Boston Baked Beans, cornbread and molasses pudding (a yummy Colonial classic),  I wandered around the market area that has been in continuous use for several centuries. In Faneuil Hall, I browsed through stalls selling handmade craft items and tourist trinkets. Its first floor has always contained shops while the second floor is reserved for town meetings. 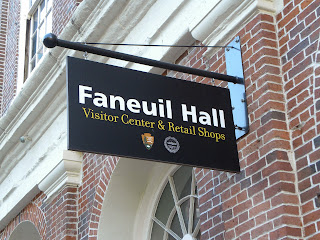 An important meeting place all through the early history of our nation, some of our greatest leaders, men like John  and Samuel Adams, Ben Franklin and Paul Revere, met on the second floor to shape the direction of our nation's fight for independence. 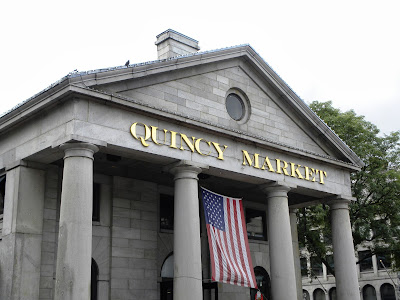 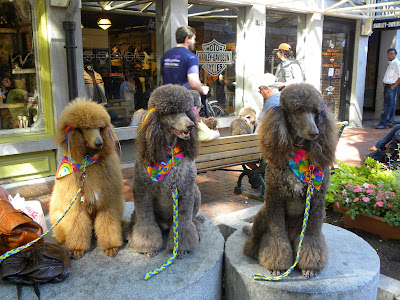 The owners of these beautiful dogs graciously had them pose for our cameras. They too enjoyed the nice Sunday afternoon in Boston.

Surrounded by modern skyscrapers, The Old State House down the street is the site of the infamous Boston Massacre.The Declaration of Independence was later read from the balcony shortly after it was signed. 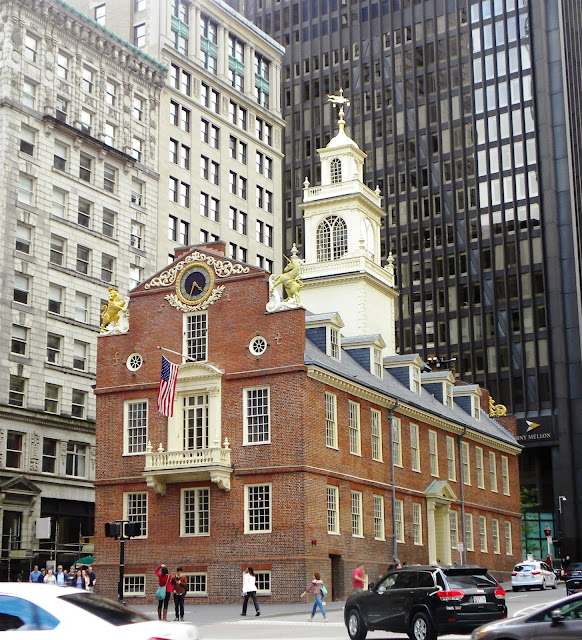 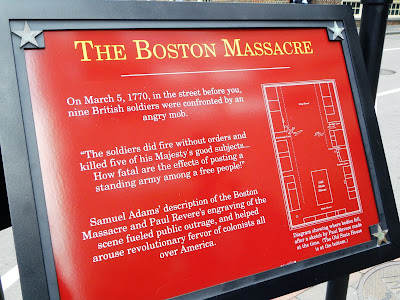 "On March 5, 1770, in the street before you, nine British soldiers were confronted by an angry mob.

"The soldiers did fire without orders and killed five of his Majesty's good subjects...How fatal are the effects of posting a standing army among free people!"  Samuel Adams 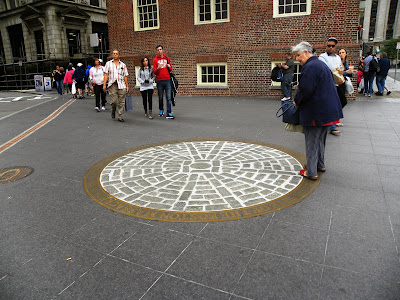 The site of the Boston Massacre
in front of the Old State House. The Freedom Trail is on the left. 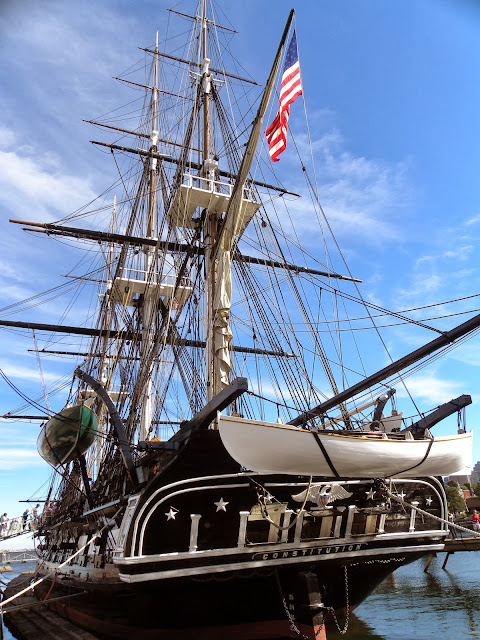 The USS Constitution. Paul Revere contributed to her construction.
She looks as regal and indestructible as the day she launched into the
waters of Boston 216 years ago.

Of all the sites we saw in Boston, I enjoyed our last stop the most—the USS Constitution. Anchored at the Charlestown Navy Yard, it is the nation’s and the world’s oldest commissioned warship. She is taken out at least once a year by the Navy in order to keep her commission, and what a treat that must be--to see her in full sail! Built and launched in Boston in 1797, her bolts and copper sheathing were provided by none other than Paul Revere!  She gained her reputation as “Old Ironsides” in the War of 1812 when British cannon balls bounced off her sides like rubber balls as if she were made of iron instead of wood. 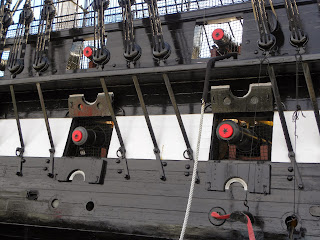 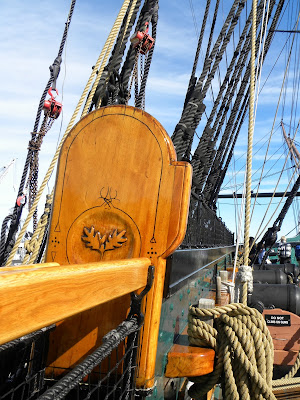 
Nancy! Is it really you?

In order to see Old Ironsides, visitors have to submit to a security screening similar to airport security except you can keep your shoes on. After buying my ticket, I put all my belongings in a plastic bin and dutifully walked through the scanning machine. As I headed over to the conveyer belt to pick up my stuff, a young security guard ran over to me and gushed, “Has anyone ever told you that you look just like Nancy Reagan? Really, you do, just like her! Beautiful, just beautiful!” Well, I was flattered of course, but Nancy Reagan? I mean, how about Audrey Hepburn or someone like that? Anyway, I’ll let you be the judge. Do I really look like Nancy Reagan?? I guess it could be worse. I could look like Ronnie. 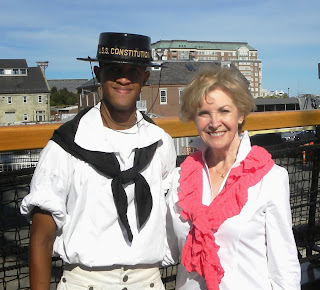 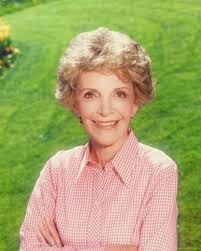 Picture courtesy of Google Images.
Watch the Video of the trip!

Next time: Plimoth Plantation, Cranberry Bogs and the Mayflower!

Posted by theworldaccordingtobarbara.com at 3:38 PM