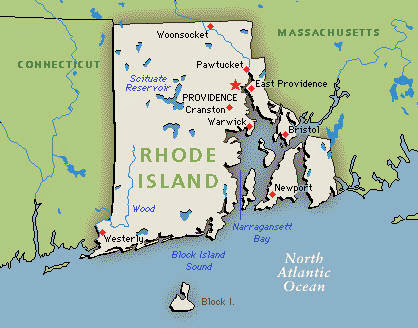 GILDED MANSIONS FROM A GILDED AGE

As I learned, Rhode Island really is an island. Originally called Aquidneck Island, it is the largest of 35 other islands in Narragansett Bay, which joined with Providence Plantations on the mainland, make up the State of Rhode Island. Only encompassing 38 square miles, “Aquidneck” consists of three towns, Portsmouth, Middletown and Newport. The most famous, of course, is Newport; famous because it attracts money like a magnet and always has. 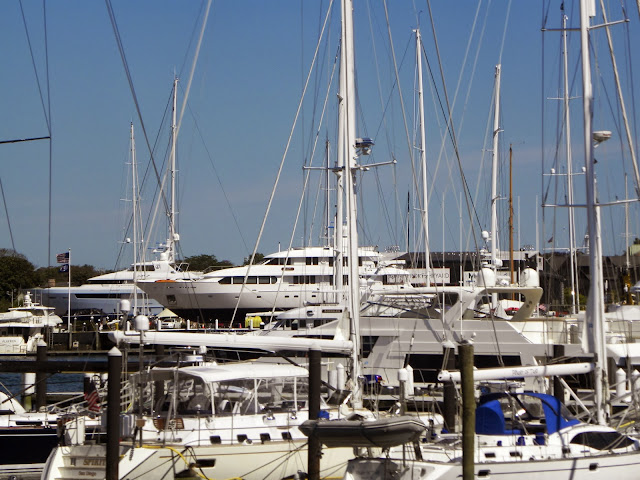 This is Newport's version of a parking lot!

Newport is ideally located on the southernmost tip of the island, commanding breathtaking views of the Atlantic Ocean. Easy to sail to by yacht, the well-to-do began to flock to Newport during the summer months to escape their hot cities as early as the start of the 19th century. They built little wooden houses on the beach and invited their friends. Over the years however, the colony of cottages began to be replaced by bigger and grander buildings until Newport evolved into an opulent resort of stone mansions, still modestly called “cottages”. 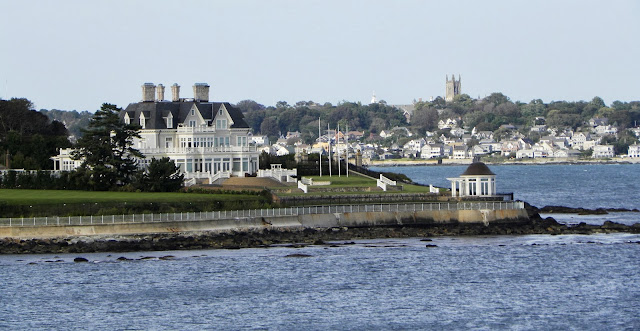 Today, these palatial homes have become expensive relics of the past, too expensive for their owners to maintain. Fortunately for people like me, many of them still stand today and are open to the public thanks to the Preservation Society of Newport County. Sold or donated by families like the Astors, Rockefellers and Vanderbilts to the Society, these priceless mansions are now ours to enjoy.  I’d seen the Rockefeller mansion the last time I was in Newport and it had left me hungry to see more. Well, I was in luck! We had tickets to see Vanderbilt’s “Marble House”! 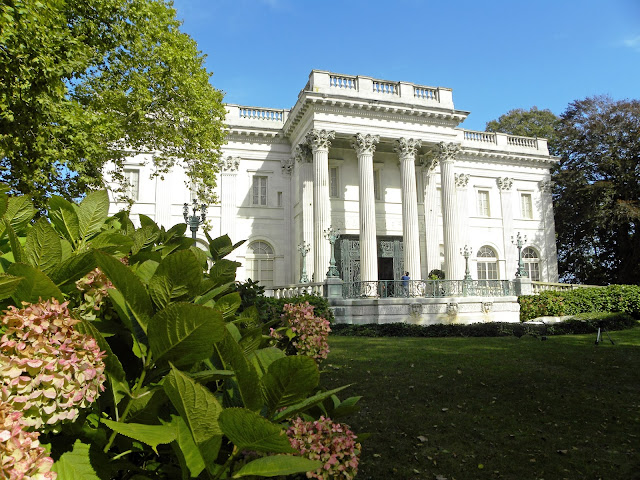 Inspired by the Petite Trianon, Marie Antoinette's little Palace in Versailles, it's a masterpiece in marble.

I could hardly wait for Josef to park the bus before I bolted out the door, ticket in my hot little hand, ready to see one more jewel in Newport’s crown, The Marble House. Inside, I wandered around like a star struck teenager. Each elegant room seemed suspended in time, sparkling with gilt and crystal, as if waiting for the next ball.  With its rich furnishings still in place, Marble House looks as beautiful as the day Mr. William Vanderbilt gifted it to his wife Alva on her 39th birthday in 1892. A palace Maria Antoinette would have been proud to call home, it only cost $60 million in today’s dollars. However, the interior and furnishings cost an additional $330 million (in inflation adjusted dollars, you understand). Of that, a whopping $210 million was spent on marble alone, all 500,000 cubic feet of it!

Ah, but Mr. Vanderbilt got his money’s worth! Imagine that you are being driven in your livered carriage up to the marbled columned entry to one of the most beautiful mansions on the island. Escorted up several carrera marble steps, you pass through massive ornate iron doors into the spacious foyer, all lined floor to ceiling in honey colored marble. Under the light of hundreds of candles, the marble looks like liquid gold. Ladies dressed in only one of the 80 to 90 couture gowns they purchased for the season, appear to have complexions of silk in the reflected golden glow. The effect would have been nothing less than stunning. And, that’s just the foyer! 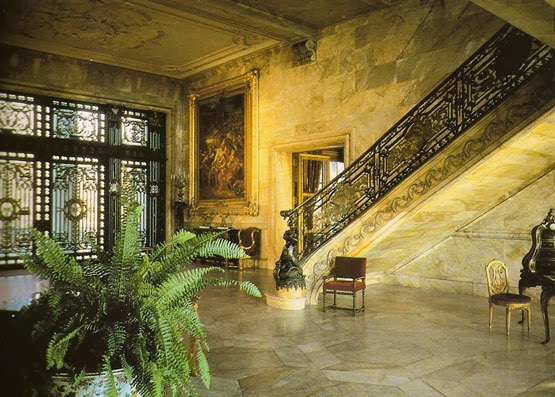 Drifting from one exquisite jaw dropping room to the next, I tried to take mental pictures of each gilded detail since we weren’t allowed to bring our cameras.  At least Google Images have some that will give you an idea of the magnificence of the place: 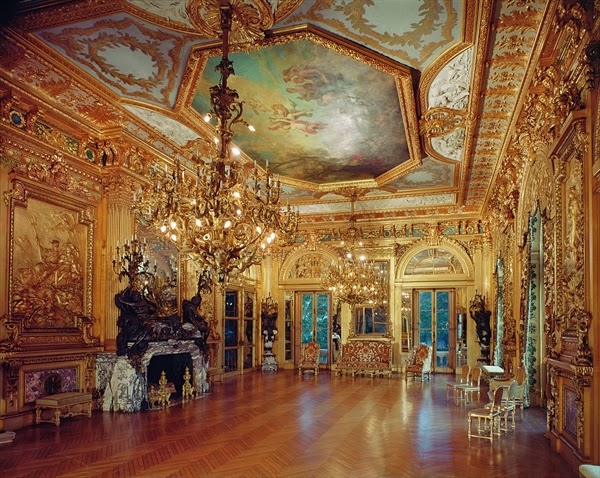 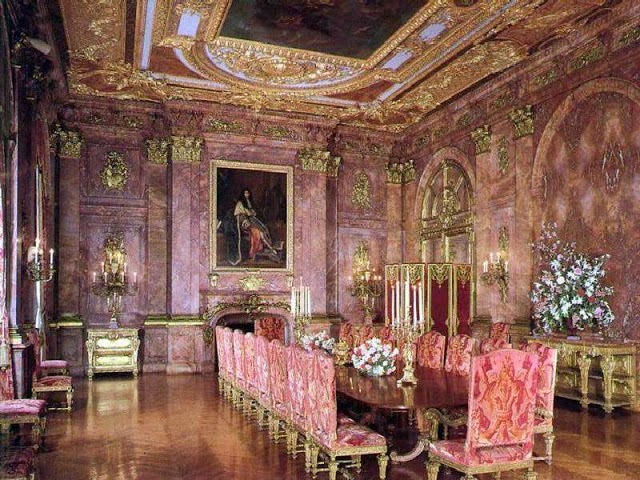 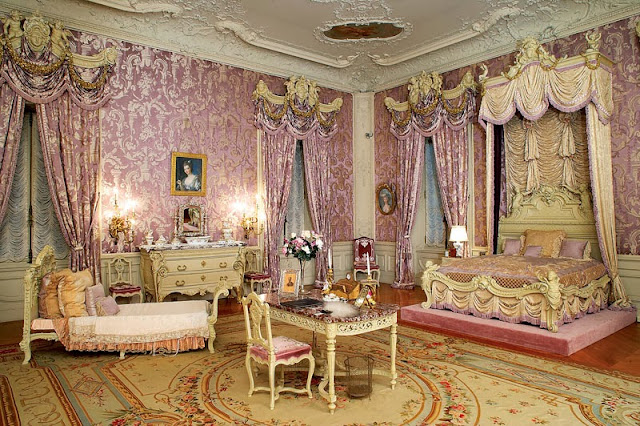 
Now for the gossip: Reportedly tired of Mr. Vanderbilt's philandering, Alva divorced her husband William after only three years in Marble House and moved up the street to the Belcourt Estate to marry Oliver Belmont, Vanderbilt's best friend. Divorce was a scandalous affair back then, but Alva wasn't content to turn a blind eye to her rich husbands escapades and took the risk of actually marrying for love.

New hubby, Oliver Belmont was a huge horse fan (you’ve heard of the Belmont Stakes?) and when this bachelor married Alva, his enormous home consisted of one bedroom and 30 luxury horse stalls. You can bet Alva changed that! 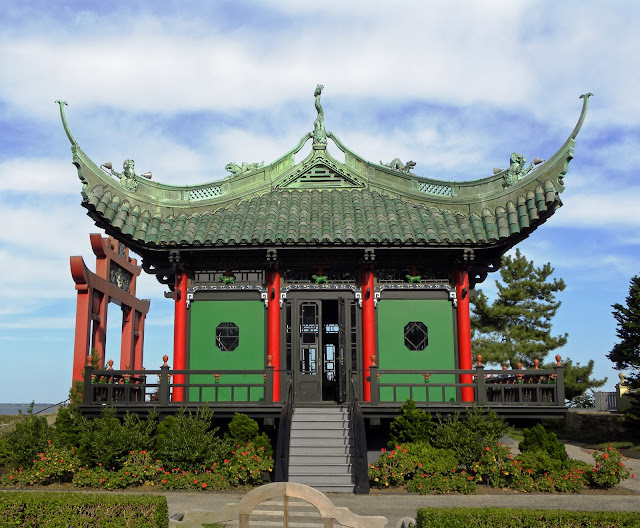 After Oliver's untimely death in 1908, Alva moved back into Marble House and added a Japanese Tea House in her backyard.  Perched on the very edge of a cliff, it commands a breathtaking view of the ocean. (Read more about Alva's fascinating story and her daughter Consuelo, mother of Winston Churchill: Consuelo And Alva: An Early Story of Celebrity ) 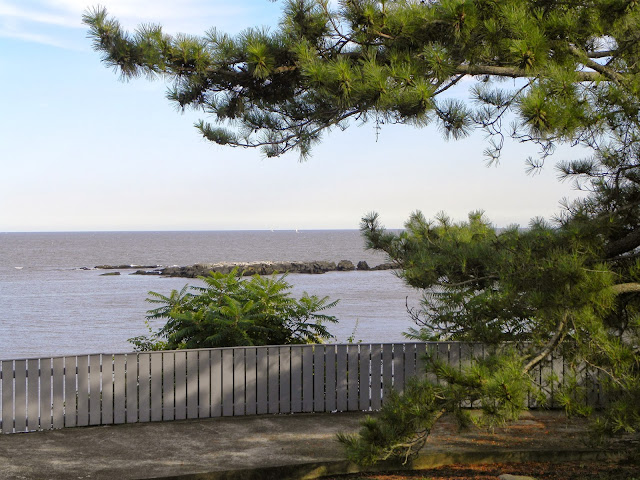 View from the Teahouse

The day not over yet, we drove slowly along the Scenic Drive, so we could fully appreciate the diversity and sheer beauty of the island. Sheep munched on green rolling pastures sandwiched between mansions and modest homes in the interior, while bleached beach grass danced wildly in the wind by the shore. Occasionally, a jaw dropping hotel sized home would loom up in front of us, a reminder of the immense wealth represented there. Yet, these enormous homes didn’t appear out of place. The wealthy, it seems, appreciates a good view like everyone else. 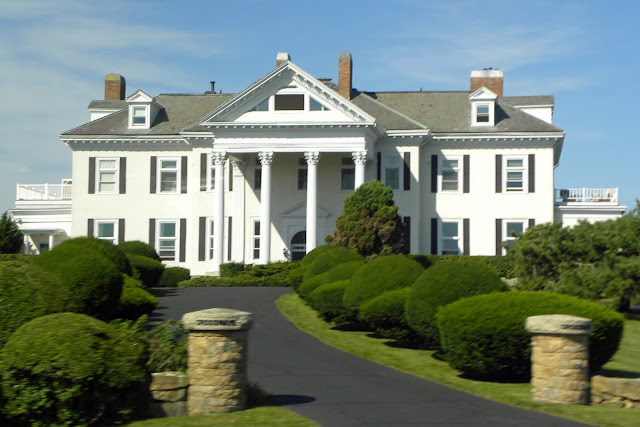 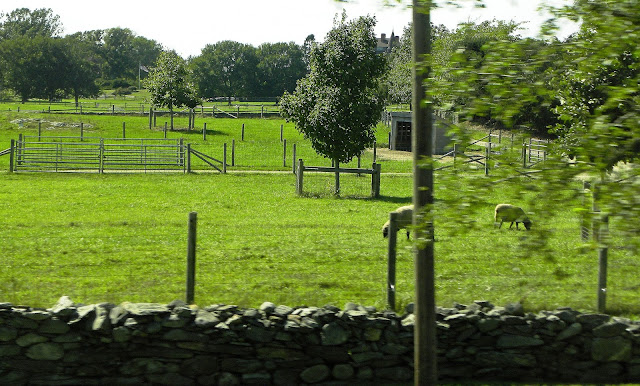 The lore and spirit of the Kennedy family is all over Newport and Cape Cod. This is the pasture where Carolyn used to ride her pony, the Kennedy home just over the hill. We also passed the modest Church where President and Mrs. Kennedy were married.

We finished our tour of Newport stopping to walk down to the famous “Cliff Walk” at sunset. The walk runs along the coastline off Bellevue Avenue at the foot of Marble House and other properties of the rich and obscenely rich. I can’t think of a better way to end the day than walking along a craggy shoreline at sunset with nothing between you and the Atlantic Ocean. Can you? 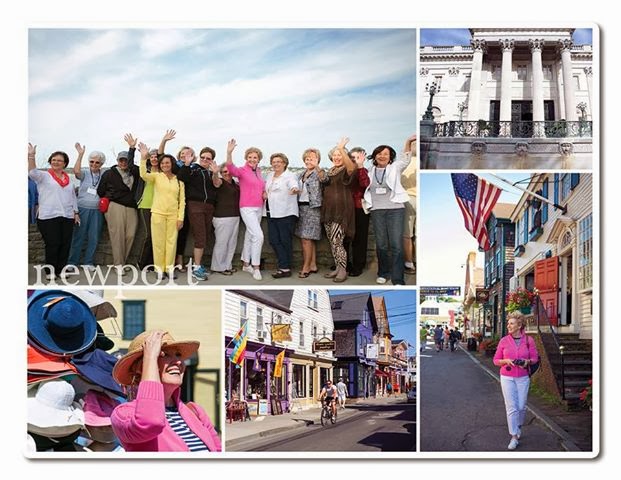 Posted by theworldaccordingtobarbara.com at 1:41 PM