Glowering down on Edinburgh like an old Scottish Lord sits the formidable fortress of Edinburgh Castle.  Seemingly growing out of a massive mountain of solid granite, the Castle commands unquestioning respect by its sheer size and bulk. It would give any potential invading army reason to think twice about scaling its sheer cliffs and walls only to stare down the barrel of one of the biggest cannons every made.


It isn’t known when the castle first appeared on the “rock”, however archaeological evidence shows that it has been continually occupied since the Bronze Age. That isn’t surprising given its defensive vantage point. From the castle walls, you can see for miles in every direction plus there’s a breathtaking view of the bay, the Firth of Forth, where foreign ships could be spotted in plenty of time to sound an alarm. The first documented evidence of an existing Castle was in the 9th century and was used as a royal residence as well as a fortress, much like the Tower of London.

The oldest building within the Castle walls is St. Margaret’s Chapel.  Margaret had been the wife of King Malcolm III and was known for her devout faith. Its tiny interior is austere, yet somehow made comfortable by the soft light and color provided by small stained glass windows, perfect for contemplation. 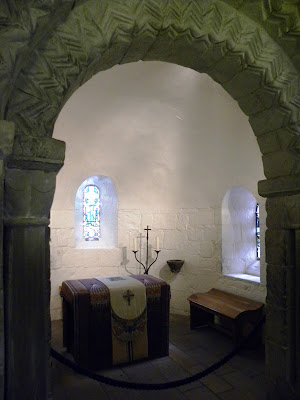 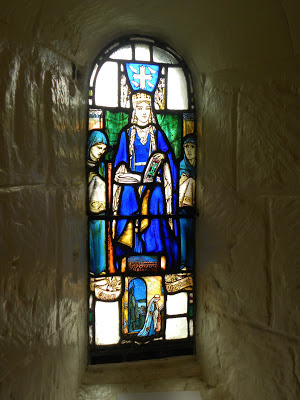 The most notable  royal residents of the Castle was Mary Queen of Scots. After her insanely jealous husband, Lord Henry Stewart Darnley had her Italian secretary stabbed 60 times while he vainly tried to cling to the very pregnant Mary’s skirts in Holyroodhouse Palace, she fled to the Castle for protection.  There she gave birth to her son, James VI of Scotland who would eventually succeed to the English throne after the death of Elizabeth I to become James I of England.

Since this was my second time visiting the Castle (first time in 2009), I spent more time exploring the Royal Palace.  A surprising discovery was the room where Mary’s little future king was born. It is a small space, partitioned off from a somewhat larger room containing the fireplace. It has beautiful wood wainscoting topped with hand painted decorations and is softly lit by an expansive window. The setting was intimate and comforting in a time that should have been a joy, but one that I am sure was also mixed with fear. I felt awed and at the same time privileged to be in the same spot where a king was born and because of the pristine condition of the interior, it seemed as if it could have happened yesterday.

Dense rain clouds that had been nothing but a brooding presence up until now suddenly released its cargo by the buckets cutting my visit to the Castle short. It wasn’t the gentle Scottish rain I had known on my last trip either. Droplets the size of dimes pounded down to earth so hard they bounced a foot off the pavement.  By the time I made it back to my hotel, thunder and lightning split the sky in a royal storm and lasted all afternoon and into the evening. Needless to say, I stayed in the rest of the day and watched “Shaun the Sheep” cartoons on the BBC.

The next day was clear and cold so I headed to my very favorite place in Edinburgh, Holyroodhouse Palace. I learned last time that there had been an Augustine Abbey on the Palace grounds since 1128 called Holyrood Abbey (Holy Cross). And like all good Abbeys, it provided a guest house (Holyroodhouse) for its distinguished guests (mostly Scottish Royalty) until around 1500 when James IV (Mary Queen of Scots grandfather) replaced the guest house with a proper Palace. It was eventually burned down by England’s Cromwell who then rebuilt it, but Charles II in 1671 tore down Cromwell’s version, rebuilding it to look much like it does today. 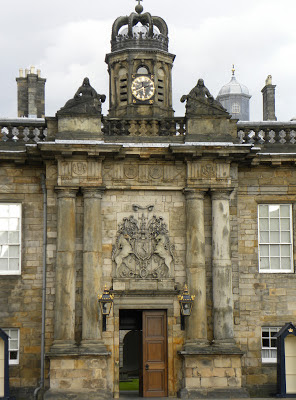 I am a Stewart on my mother’s side but I’d never known exactly what it meant to be a “Stewart” until I began to tour Holyroodhouse Palace. From the huge painting of King George IV in full Royal Stewart regalia in the dining room to the Great Hall decorated with the paintings of all the Stewart kings did it begin to dawn on me that Holyroodhouse was a Stewart Palace! It was Mary Queen of Scots , having been raised in France, who changed the spelling of “Stewart” to the French spelling of “Stuart”, but otherwise it was the same clan and family. Always made to feel that the “Stewarts” were the poor relations of the family (or non-royal), I practically swelled to twice my size in pride!

With all the stately and elegant trappings of the Palace, it was the Palace grounds I loved the best. I had the whole place to myself as I wandered on the winding paths lined with flowers and plate sized hydrangeas. Maybe it was because I could imagine the likes of Lady Di and Queen Elizabeth II walking on these same paths that made them so special. 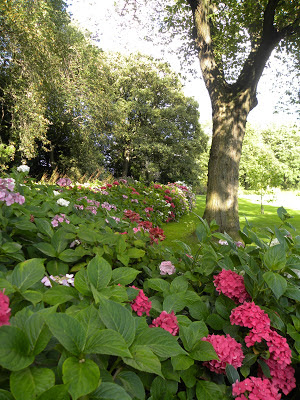 That night several of us went to a dinner and stage show which was advertized to include “typical historic Scottish tunes and melodies with a demonstration of Scottish singing and dancing and the Addressing of the Haggis.” I should have known the minute I saw the sea of silver hair in the audience that we were not going to get the kilt kicking Scottish party as I’d hoped, but a combination of a syrupy Lawrence Welk sing-a-long and a bad Las Vegas lounge show, but thankfully the Address of the Haggis saved the evening.

Now, haggis, if you haven’t heard, is ground up and seasoned sheep’s organs stuffed into the sheep’s own stomach and cooked. A traditional and ancient Scottish dish, it's an acquired taste. If you don’t like the taste of liver, you are out of luck. Even Robert Burns, Scotland’s own poet, described it as “gushing entrails—warm-reekin’, rich!” The ceremonial serving of it goes like this: an honored guest, it is "ceremonially piped" (escorted in by manly men in skirts playing bagpipes) to the table where it is “addressed” by reading Burn’s extremely funny poem, “Address of the Haggis”. Then it is crudely stabbed and served with “neeps” (mashed turnips) and “tatties” (mashed potatoes). I don’t like liver, tongue or various other parts of an animal, but I did get a few bites down because it was pleasantly seasoned, but unfortunately, the liver taste couldn’t be completely masked. Sean was smart and didn’t try it. It may have been a relative after all!

Time to say “See you later!”

On the last night of our tour we had a farewell dinner at the hotel. We were piped in by a burly Scot in royal Stewart plaid and served, you guessed it, haggis. Everyone who had caught Sean mania brought their wooly sheep and lambs and we sang Auld Lang Syne, lyrics by none other than“Rabbie” Burns. I’ve never been sure what the title of the song meant, however the intent is clear--friends should not be forgotten. I’d made so many good friends on this trip and I will miss them dearly, but I will never forget them. So here’s to you, fellow travelers of the England, Scotland and Wales tour of 2012—I’ll see you later!

English version
(Auld lang syne means something like "old times sake" or "old long since".)
NEXT TIME: In May I'm touring the historic parts of Charleston, Savannah, Jekyll Island and on down the coast to St. Augustine, Florida. I've always wanted to see this part of the country, especially after I read "Midnight in the Garden of Good and Evil" by John Berendt. Be sure and read it if you can in the meantime. (It is the book and not the movie that makes you want to see the beautiful homes and courtyards of Savannah.) Until then, Happy Traveling!

Posted by theworldaccordingtobarbara.com at 1:23 PM