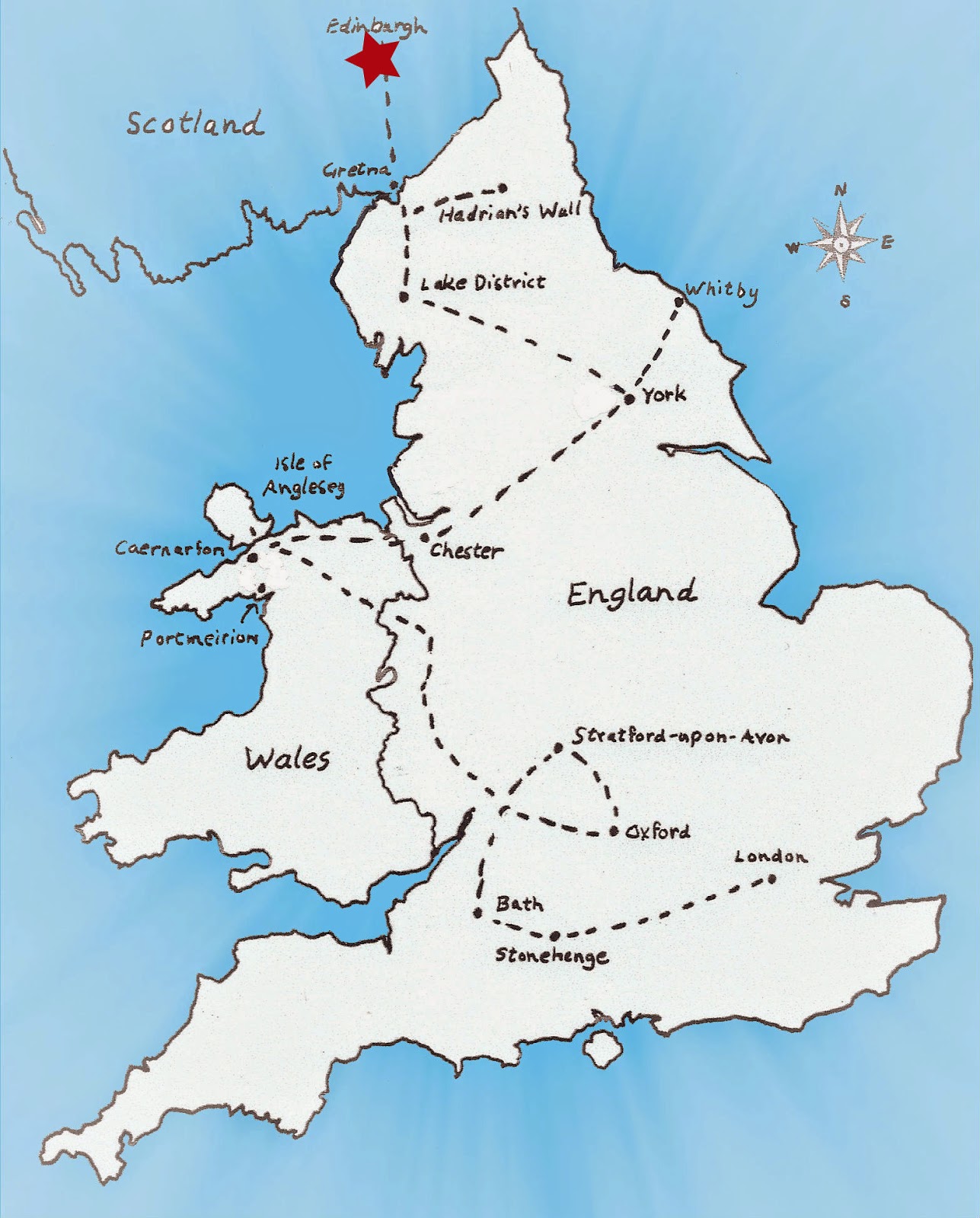 The last time I was in Edinburgh the town was in the midst of its annual August Festival Fringe. The Royal Mile, lined with booths selling trinkets of every variety, was alive with street performers and revelers. It had been so much fun dodging the thousands of locals and tourists while trying to negotiate my way down this mile long street that connected Edinburgh Castle to Holyroodhouse Palace. I fed off the energy around me and felt like a medieval farmer who goes into town only once a year on festival days, awed and excited. This time however, the Royal Mile had been given back to the cars, buses and taxies; the festival was over, the Military Tattoo gone for another year. And, it just wasn’t the same. (In 2009, my friends Kay, her husband Tom and I spent two weeks in Scotland timing our visit to see the famous Edinburgh Military Tattoo, a spectacular show featuring hundreds of marching bagpipers and drummers using Edinburgh Castle as a backdrop.) In short, Edinburgh didn’t feel right without Kay and Tom or the festival. But my new friends Paula and her husband Chuck hadn’t seen this beautiful city and perhaps I could recapture some of the delight I had felt when I had first visited if I saw it through their eyes so I volunteered to show them around.

Scotland is almost on the same latitude as Alaska so Edinburgh is often rainy, dark and gloomy, and the day we arrived was no exception. Coming from hot and sunny London just a few days ago to cold and rainy Edinburgh was rather depressing. I had to bundle up in long johns and a coat and I was still cold! The weather wasn’t too bad the day we arrived in late August, but it was soon going to turn ugly.

The location of our hotel could not have been better. We were in the heart of Old Town--right off the Royal Mile and midway between Edinburgh Castle and Holyroodhouse Palace, the Queen’s residence when visiting Edinburgh. Old Town was built in the Middle Ages; its towering dark stone buildings loom over narrow winding streets, blocking the light. Alleyways called “Closes” lead off of the Royal Mile and open into a hidden world beyond. I felt a little like Alice in Wonderland falling down the rabbit hole as I walked through one of these narrow, dark tunnels emerging on the other side into an amazing landscape of medieval high rises. At the height of the Industrial Age, 80,000 people were crammed together like sardines in tiny apartments and the poverty had been appalling. However, today only 4,000 people live comfortably behind these ancient facades; its dreary past is long gone and what exists now is an alive and dynamic city with flowers tucked into every nook. 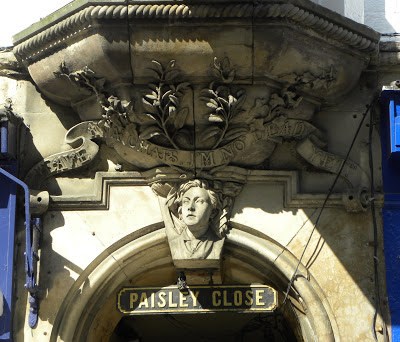 The banner reads: "Heave awa' chaps, I'm no' dead yet!

One Close I wandered into opened onto a secret garden. Just a few feet away the street was crowded  with traffic and bustling people but inside, the cool sanctuary of the garden was peacefully empty. I'd again followed the rabbit into an enchanted place that seemed made just for my discovery. It was a public garden called Dunbar's Close Garden, but tucked away out of sight it waited patiently to delight only those who took the time to explore the hidden corners of Edinburgh. 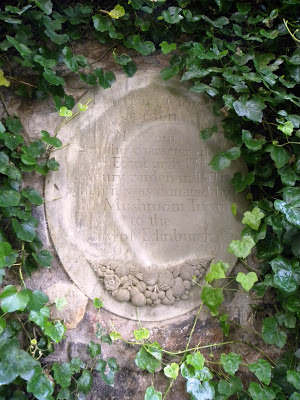 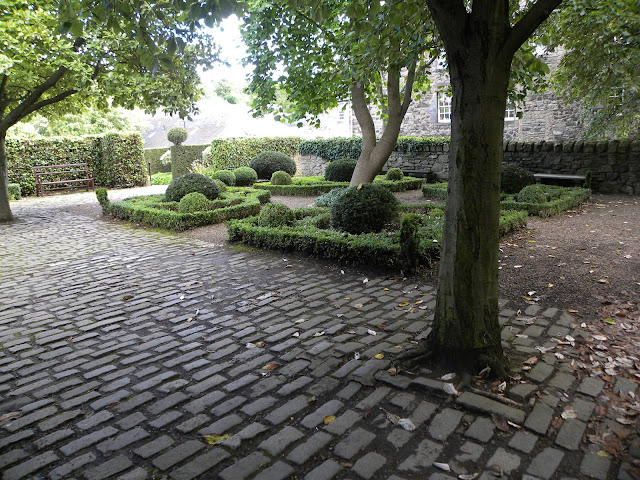 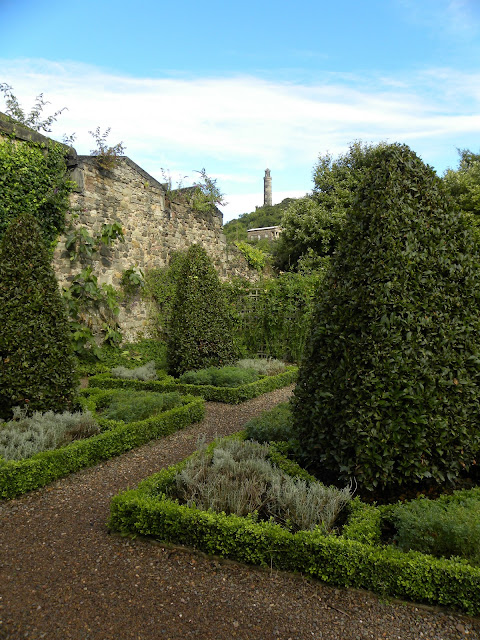 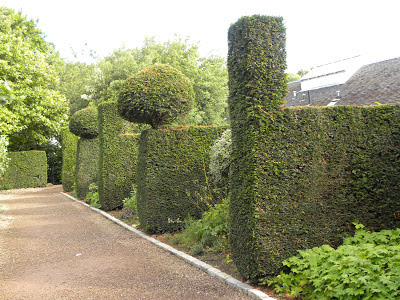 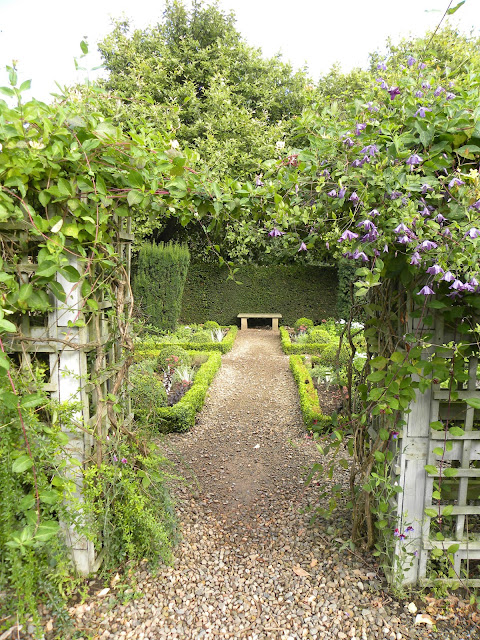 After settling into our rooms, Paula, Chuck and I walked all the way up the Royal Mile to the imposing Edinburgh Castle which is perched on top of a massive granite outcropping rising several hundred feet above the city. From there, we descended a set of steep stairs called “Patrick Geddes Steps” to the legendary Grassmarket below. Built to accommodate the weekly market, it had been a notorious part of the old city, a hang out for rowdies and prostitutes who partied in the door to door pubs. We stopped for drinks at the “The Last Drop”, an apt name for a pub I thought until I heard that the public gallows had been located right outside their door and the name commemorates the final hanging they had there. We thought it was very possible that the resident ghosts of the dearly condemned departed could be sitting right next to us, so to be on the safe side we raised our glasses and wished them well.
After dinner, we walked down the Royal Mile past landmarks like St Giles Cathedral all the way to Holyroodhouse Palace. The Palace was closed for the day, so we could only peer through the magnificent ornate gates and marvel at one of the most beautiful palaces I had ever seen. As we turned to leave, I noticed that the street in front of the Palace was called “Horse Wynd”. (Either “Wynd” means something else in Gallic or someone had a great sense of humor, I don’t know which.) Across the street from the Palace is the new Scottish Parliament building—a strange dichotomy of ultra modern design and symbols of primitive Celtic life. However, I think it aptly illustrates the ancient collective Scottish yearning for a modern independence. Fiercely proud, they feel they are first and foremost Scottish and the Rampart Lion (the symbol of Scotland) will one day roar again!
The sun was beginning to set as we walked back up the Royal Mile, throwing amber light and ruddy shadows on the buildings turning them into a master painting. We ended the day by having a great Italian meal across the street from our hotel.  It seems Scottish chefs know how to make a mean eggplant rigatoni! 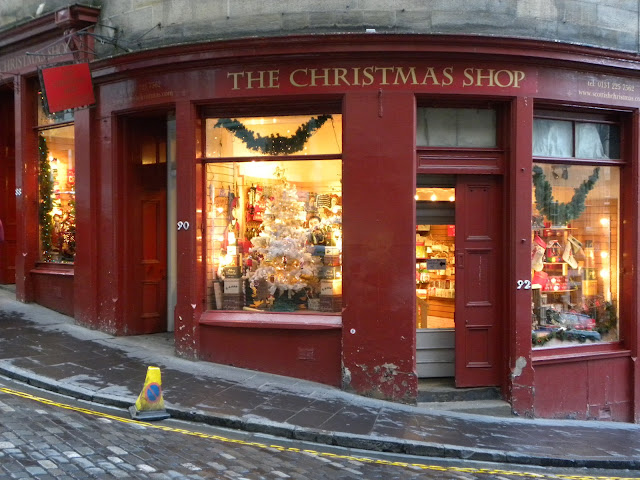 (Double click on any picture for a full screen slide show.)

TO READ MORE about St. Giles Cathedral and the Palace of Holyroodhouse check out my blog "Been There, Seen That!" ***Listed on the right of the screen is a heading called "Blog Archives". Click on 2012, then click on July.

DON'T MISS: The Military Tattoo.  When you visit Edinburgh, make sure you see the Military Tattoo. It takes place every year in August.  Make your reservations early.  Best seats face the Castle. It will be one of the most exciting shows you will ever see especially if you have any drop of Scottish blood in ye at all!

Next time: Edinburgh Castle, Palace of Holyroodhouse and Haggis
Posted by theworldaccordingtobarbara.com at 2:50 PM