My friend Kay is not only a wonderful host, she's a great tour guide and she wanted to show me all the major places of interest in the historical town of Auburn.  Next on our agenda was a charming white washed house surrounded by grapevines that now serves as a museum showing a slice of life in the early days of the Wild West gold rush.


On the heels of the miners in their frenzied rush to make their fortune in gold, came the merchants and business men who saw that their fortunes were going to be made from the miners.  Two of these enterprising men where George Bishop and John Long.  Together they built the Traveler's Rest Hotel in 1851 right beside the old Auburn Folsom Road.  It couldn't be missed and was a welcome place for miners, teamsters, and pony express riders to hang their hats and water their horses on their way to and from the mines in nearby Rich Flat.  A few years later in 1868, the hotel, now a home, and 30 acres of fertile land were sold to another enterprising man, Benjamin Bernhard.  The industrious immigrant from Germany immediately built a parlor and kitchen addition for his growing family and acquired 10 more acres, planting all 40 acres in wine grapes.  He then built a handsome stone storage building right on the road and a wine making barn behind the house and ingeniously connected the two with an underground tunnel under the house.


Daphne Lake was our gracious docent on the day that Kay and I toured the beautifully restored home that the Bernhard's owned for almost 100 years. She formally welcomed us in her pleasant South African accent, dressed as a respectable Victorian lady.  But, as she lead us from parlor to kitchen to nursery pointing out the latest in Victorian comforts, her formality faded away and she became more animated and warm as if she were Mrs. Bernhard herself and we were her special guests.  With pride, she pointed out that the house had the latest in lighting fixtures, adapted for both gas and electricity saying, "Electricity was unreliable then, you know."

And it was with special pride that she showed us the large brick barn where Mr. Bernhard made his wines and wine barrels.  She pointed out the cellar doors behind the house which leads to a tunnel that connects the barn with the stone storage building.  Mr. Bernhard was influential enough that he had the road moved from in front of the house to the front of the storage building, where he could then cleverly roll his barrels under the house, down the slope into storage, and out the iron doors in front to mule driven wagons.  Perhaps it was because of the exceptional quality of his Claret, Sherry, Port, Zinfandel and Brandy he supplied to the area. 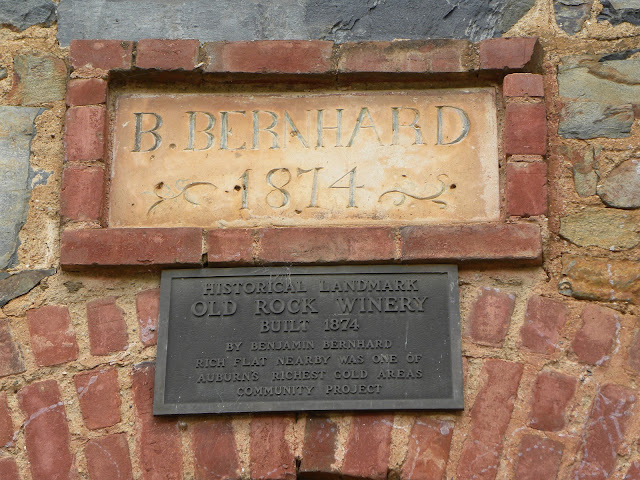 The home fell into disrepair in the 1960's and was abandoned.  Residents concerned with preserving Auburn's history stepped in and restored it and it is now part of the Placer County Historical Museum Foundation.  The old stone storage building is as cool as the day it was built and is now used as a commercial winery and tasting room from grapes still grown on the property.


Posted by theworldaccordingtobarbara.com at 3:12 PM