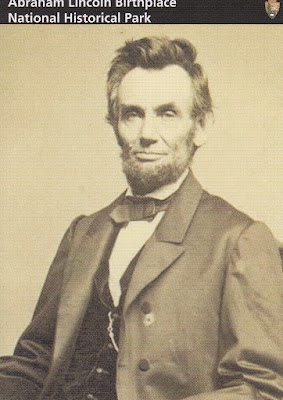 We consider him one of our greatest presidents. He was one of us—born in a one room log cabin yet rising to the highest office in our country by the sheer will of his determination; a giant of a man both in stature, spirit and heart.

(Three friends (Timothy, Thomas and I) embark on a roadtrip to trace the life of this great man, from the simple log cabin where he was born to his burial place in Springfield, Illinois. A journey no more than a few hundred miles...) 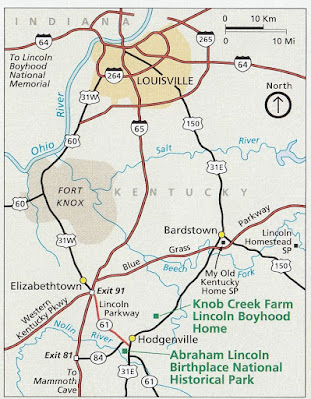 After sightseeing in Louisville, Kentucky, we rented a car and headed south on Route 65 to visit Mr. Lincoln’s birthplace. The farm site where he was born and his boyhood home in Knob Creek are beautifully preserved in an Historical Park just a few miles away from Louisville. We spent a glorious fall day between the two parts of the park, remembering and honoring the memory of one of our greatest presidents.

His grandparents and parents were true pioneers, settling in Kentucky territory opened up by Daniel Boone just a few years before. Thomas Lincoln, Abe’s father, settled in Elizabethtown, buying property and working as a carpenter.  However, before Abe was born, he and his wife Nancy decided to try farming and bought Sinking Spring Farm a few miles away. It was here Abe was born in a log cabin on a knoll near the spring.  (Born on Sunday, February 12, 1809, he was named after his paternal grandfather.) The original cabin doesn’t exist anymore, but one much like it is preserved in his memorial close by. 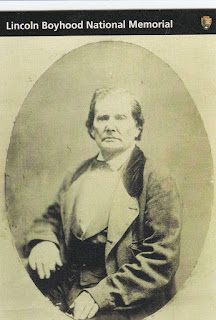 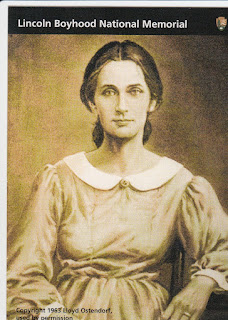 Abe Lincoln's parents: Thomas Lincoln and Nancy Hanks Lincoln (There are no pictures of Nancy Lincoln. This portrait of her are from descriptions of people who knew her.)

Abraham Lincoln Birthplace National Historical Park preserves two separate farm sites in LaRue County, Kentucky where Abraham Lincoln was born and lived until he was 7. He was born at the Sinking Spring Farm and lived there until the family moved to the Knob Creek Farm about 10 miles northeast when he was 2 years old. the Sinking Spring site is the location of the park center.

In December 1808, Thomas Lincoln purchased a 300 acre farm known as the Sinking Spring Farm near Hodgen's Mill (present-day Hodgenville), Kentucky where Abe was born on February 12, 1809. The family only lived there until Abe was 2 years old because a dispute over the title of the land drew Thomas Lincoln into a legal battle that forced them to move.
(Kentucky land titles at that time were, frankly, a mess. Who owned what and where was unclear because the law hadn't caught up with the influx of immigrants being sold land often times without a clear title. Thomas Lincoln lost two farms [one he bought and one he rented] only to be evicted from both. That and Kentucky's pro slavery stance eventually drove the Lincolns from the state into Indiana in 1816.) 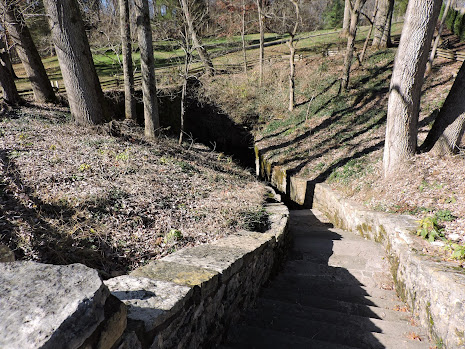 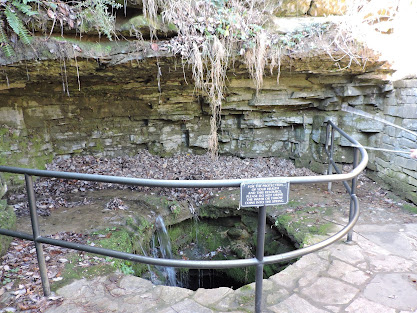 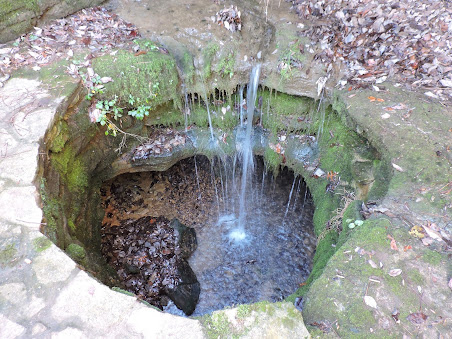 SINKING SPRING:  Abe Lincoln was born in a log cabin just a few feet from here.

I took a long time stilling myself and imagining Lincoln in this place:  father and mother tilling the soil while older sister Sarah took care of baby Abe. Standing among the whispering trees, I listened to the birds and felt the breeze knowing that it was in this place that started the journey of a truly great man; a journey that would end just a few hundred miles away from where his life began. 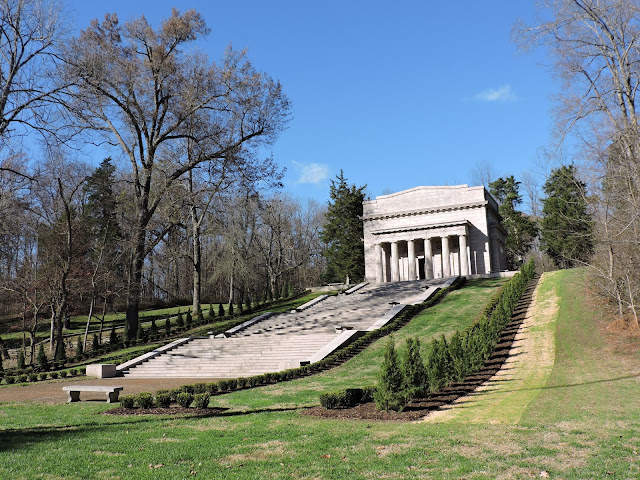 The Memorial was meant to look like the Parthenon in Athens.

Just steps away is a stately memorial building dedicated by former President William Taft on May 30, 1922. It contains an actual log cabin, similar to the one Abe Lincoln was born in. A tiny shelter with dirt floors, it is hard to imagine that these were the dwellings our pioneer ancestors lived in to be able to forge a new future for themselves. 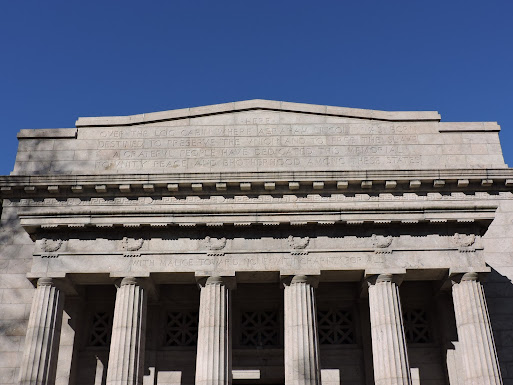 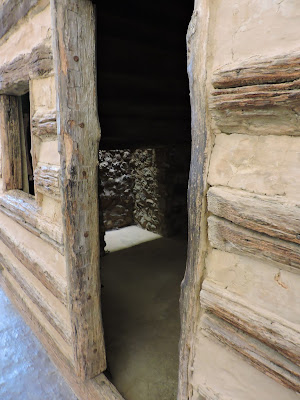 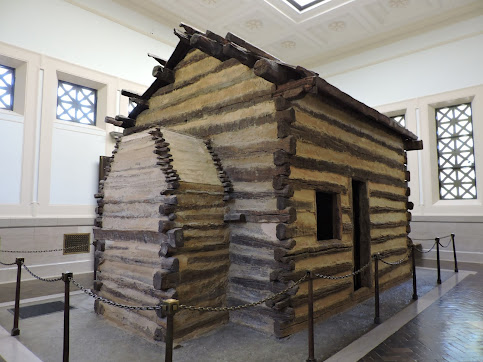 A typical log cabin, about 18'x16', one window, covered in parchment, and one door. 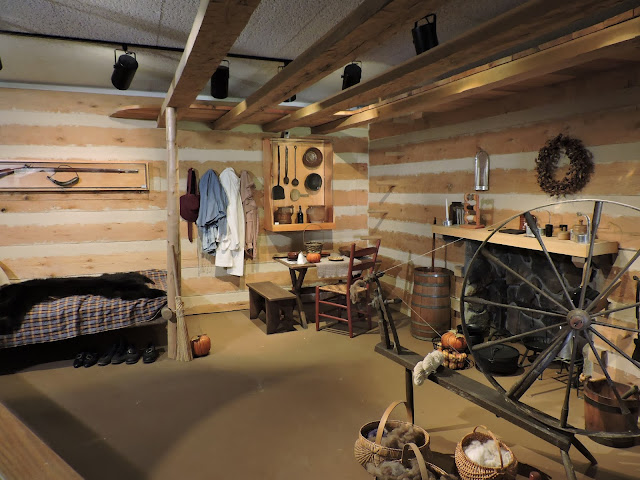 Typical interior of a one room log cabin of the era.
VISITORS CENTER
Before leaving the area, we stopped at the adjoining Visitors Center. Because we traveled in chilly November, we had many of these places to ourselves, which is a great advantage! No crowds and plenty of opportunity to talk to the docents and curators who were more than willing to give us a wealth of additional information. 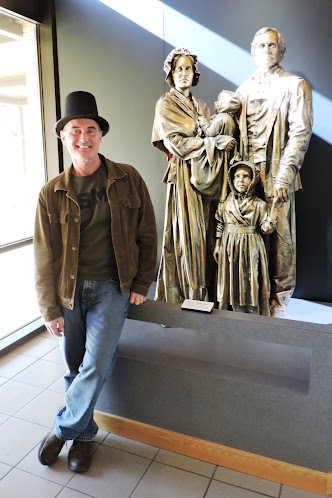 A Pioneer Family, Thomas and Nancy Lincoln, their daughter Sarah, and their son, Abraham, who was born on Sunday, February 12, 1809.(Tim couldn't resist donning a Lincoln style top hat for the occasion!)

KNOB CREEK FARM
While ownership of the Sinking Spring Farm was in question, the Hardin County Court ordered the Lincolns off the land. Forced to move, Thomas Lincoln leased 30 acres of land ten miles away along Knob Creek where the family lived for the next five years while continuing his legal battle to regain the Sinking Spring Farm. In August 1816, Thomas lost his court battle for the Sinking Spring Farm and was soon served with an eviction notice from Knob Creek as there was a dispute over the ownership of that land as well!
"My earliest recollection is of the Knob Creek place." The Lincoln family lived on Knob Creek Farm from the time Abraham was two and a half until he was almost eight years old. Here he grew big enough to run errands and chop wood. He vividly remembered much of that time, recalling the surrounding hills where he picked berries and how he  watched his mother’s face while listening to her read the Bible. Lincoln could also remember the baby brother who was born and died on the Knob Creek Farm. 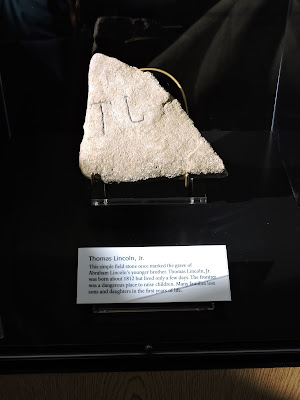 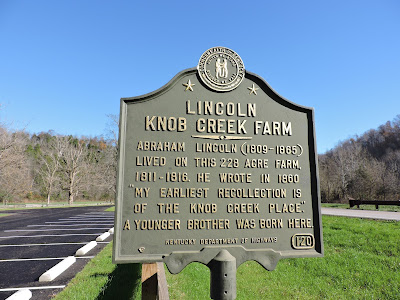 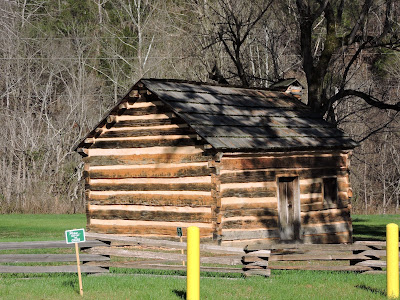 He remembered one occasion when he and his sister, Sarah, had planted the garden; Lincoln said he planted pumpkin seeds in every other hill and every other row while Sarah and others planted the corn. The following night a big rain in the hills sent water rushing into the creek, the creek flooded the fields and washed away their garden. 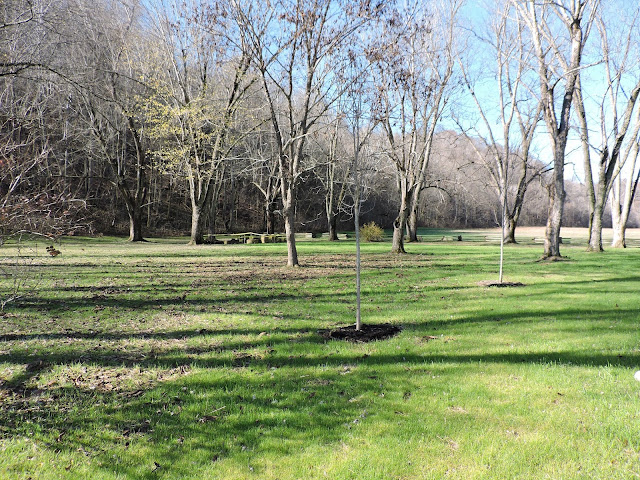 It was also at Knob Creek that the young Abe saw slavery first hand. He witnessed a shackled group of African - Americans being marched down the old Cumberland Road, to be sold as slaves. He and his family attended an anti-slavery church and he never forgot the sight.

Lincoln once wrote that while living on Knob Creek he and his sister, Sarah, were sent for short periods to an A, B, C school, which Lincoln called “the Blab School” because of the emphasis on rote memorization and then reciting or "blabbing" it back! These were subscription schools and lasted only a few months. Free schools did not come to Kentucky until the 1830s.

Forced to leave the Knob Creek farm because of another title dispute, the family decided to leave Kentucky altogether in December 1816 and move to Spencer County, Indiana. One could own clear title to their land in Indiana and there was no slavery allowed.

OTHER PLACES TO VISIT WHILE IN THE AREA: 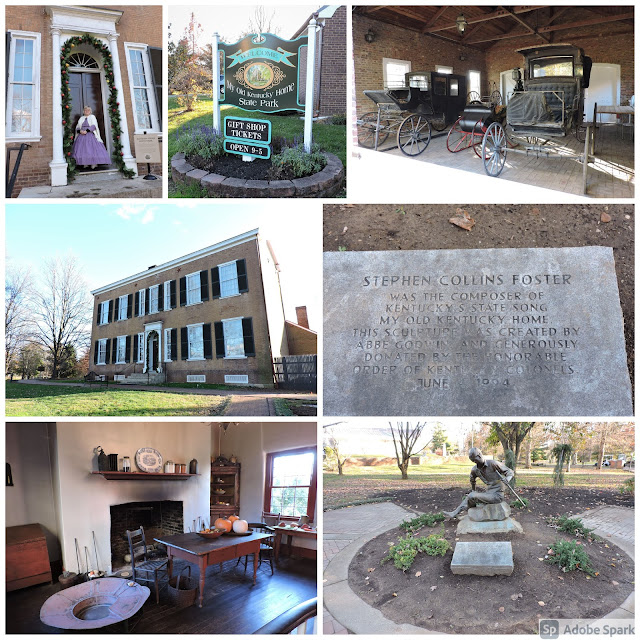 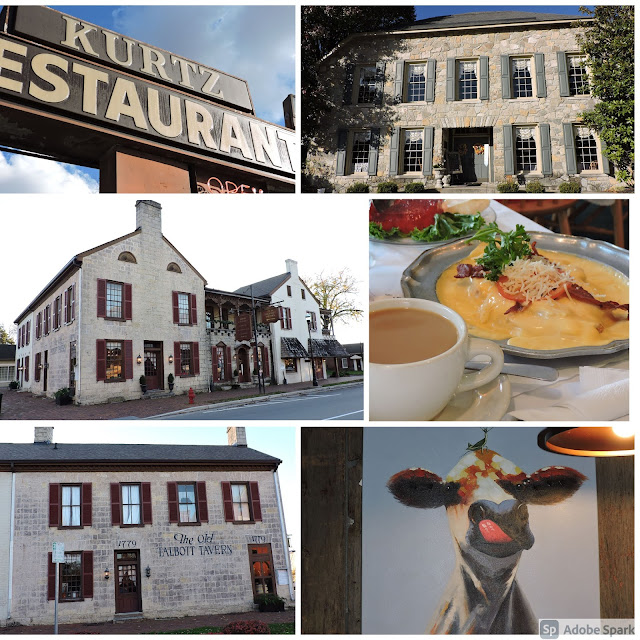 Great places to eat while in Bardstown, Ky.
Top: Kurtz Restaurant, 418 E. Stephen Foster Ave.
Bottom: Old Talbott Tavern, 107 W. Stephen Foster Ave. Great Pies!! Even the cow agrees!
NEXT TIME: The Lincolns move to Indiana
MUST READ:  Recommended by the Lincoln Library:
I read it cover to cover and couldn't put it down. It reads like a novel. Excellent! 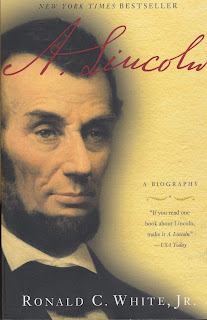 Posted by theworldaccordingtobarbara.com at 11:49 AM