ST. IVES, ST. MICHAEL'S MOUNT AND THE MOORS OF DEVON 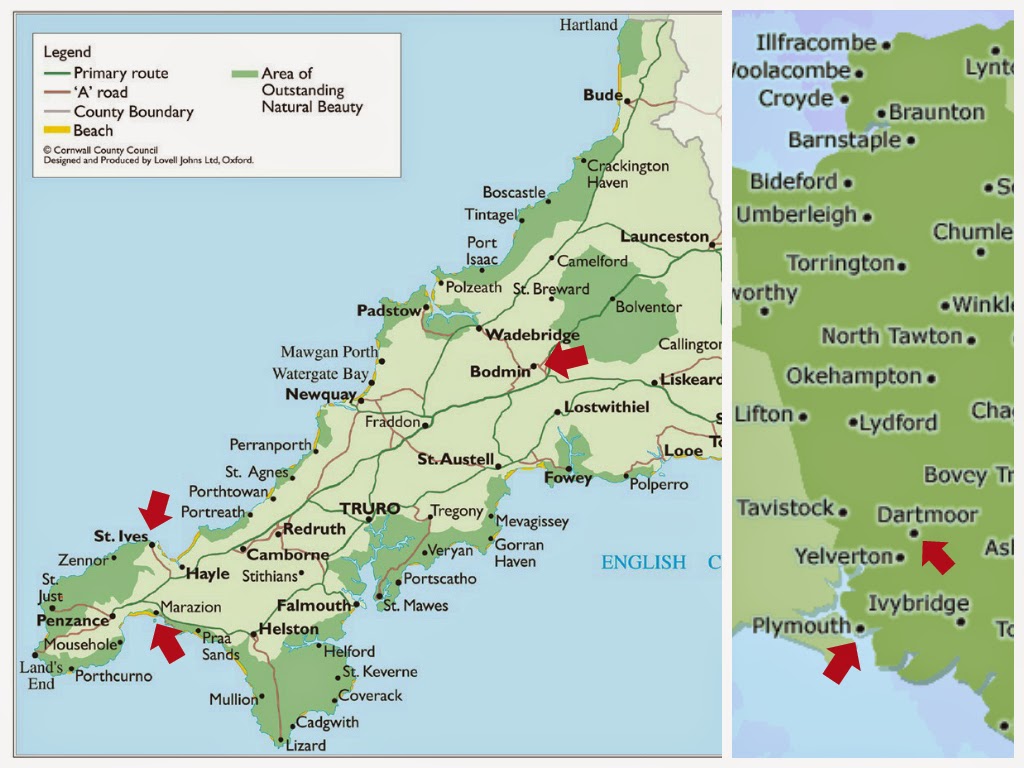 Map of Cornwall and Devon, courtesy of Google Images

“Good morning, Ladies and Gentlemen! Isn’t it a glorious day?” beamed Stephen, our guide. “It will be a full day. Today we will see Plymouth Harbor, St. Ives, St. Michael’s Mount, and Bodmin Moor.  And, tonight, we will venture into the brooding and mysterious moors of Devon called Dartmoor! Yais! It is a perfect day!” We quickly caught his excitement, about the events to come and the weather: low to mid 70's and mostly blue skies!

The day started with a short boat excursion around the famous Plymouth Harbor. I knew that Plymouth is an important ship building and a military port, and that this was where The Mayflower was built, but the surprise and absolute delight that morning came when I realized that we would board our little boat at the exact spot where the Mayflower set sail for the New World in 1620!

To me, this is one of the greatest pleasures of traveling: to have what I’ve learned and seen come around full circle. Two years ago, I visited Plymoth Plantation in Massachusetts and climbed aboard the Mayflower II, which is an exact replica of the first Mayflower. Both the original and the replica were built in the Plymouth ship yards, and both sailed from those small, stone steps. It doesn’t get any more exciting than that.  (Be sure to watch this short video of the steps. It says it all without a word.) Mayflower Steps 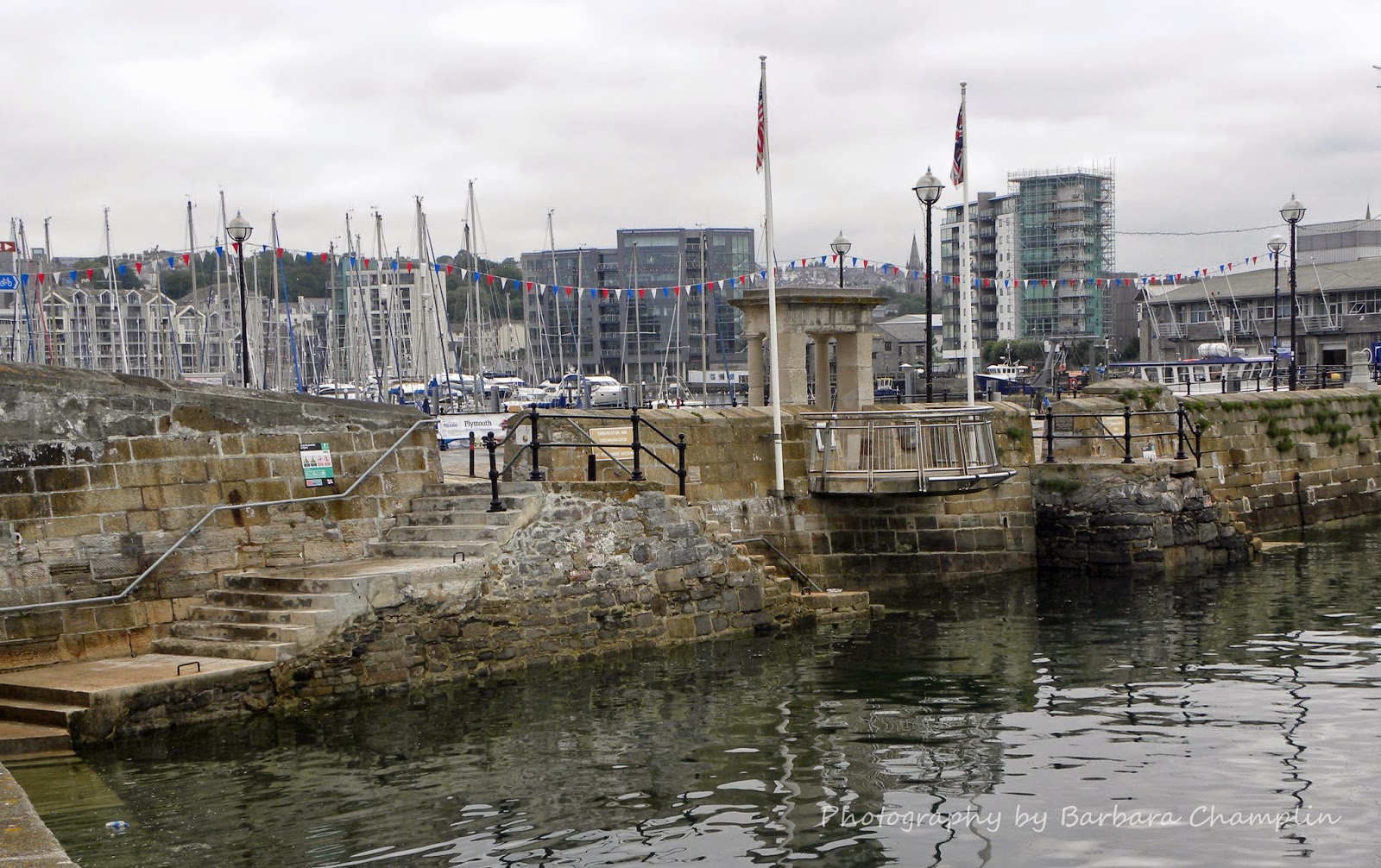 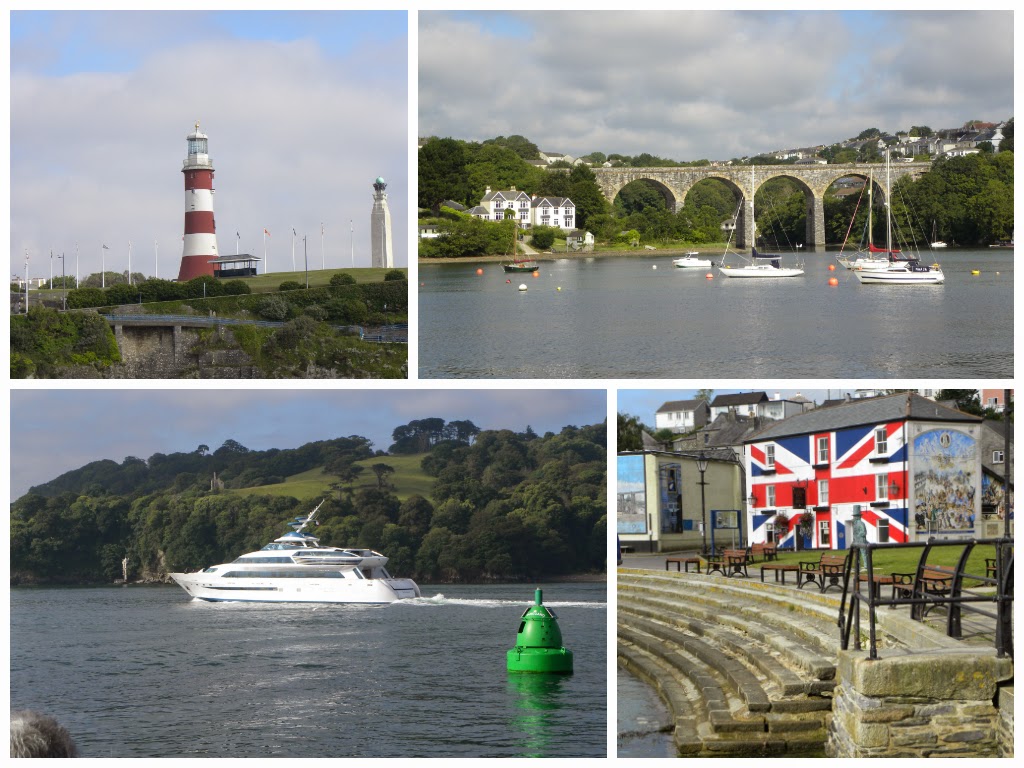 Located on steep bluffs overlooking the Atlantic Ocean, it’s easy going to get to the center of St. Ives, but not so fun getting back. Fortunately, there are shuttles to return people up to the main road or there would be a lot of exhausted tourists!

We didn’t stay long in St. Ives; just enough to grab a quick lunch and take a few photos. Soon, we were back on the road and headed for St. Michael’s Mount which is connected to the town of Marazion, near Penzance. 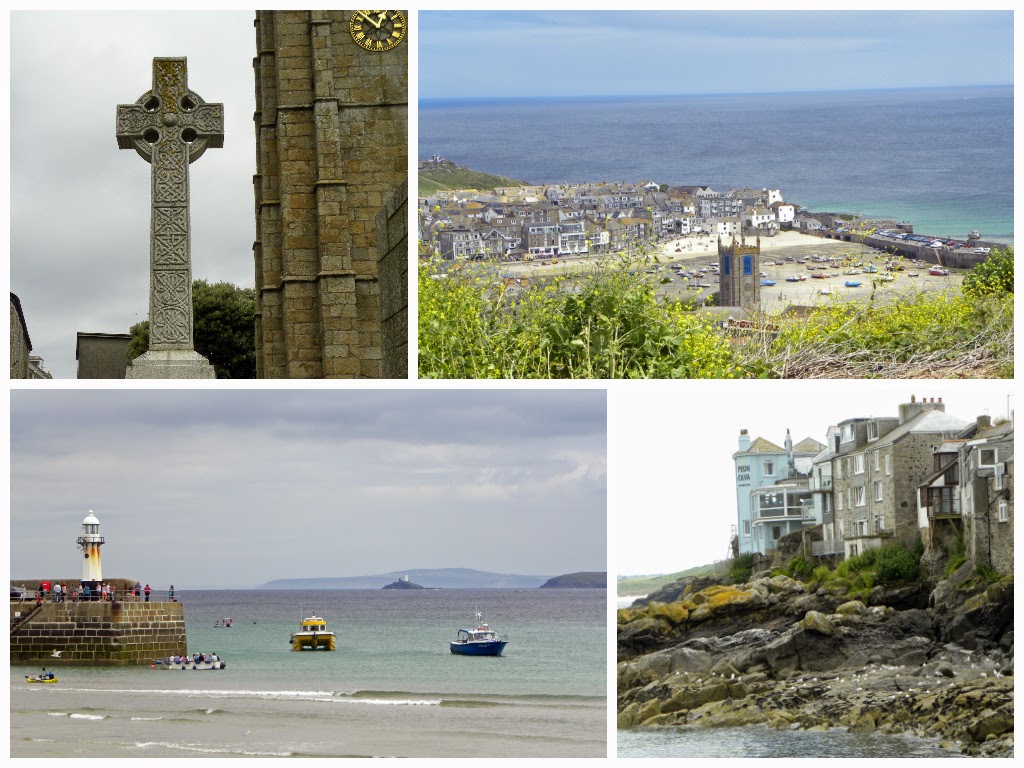 Christianity thrived in Ireland while it was banned by the Romans in Britannia.
St. Ives got its name from a female Irish Saint in the 5th century.

If St. Michael’s Mount looks eerily familiar with another site you may have seen in Normandy, there is a definite connection. St. Michael’s Mount and Normandy’s Mont Saint-Michel are both built on high granite mounds that become isolated from the mainland in high tide and only become accessible to foot traffic at low tide. Edward the Confessor gave this Cornish site to the Benedictines, the religious order of the Norman Abbey, in the 11th century, perhaps because of their similarities. 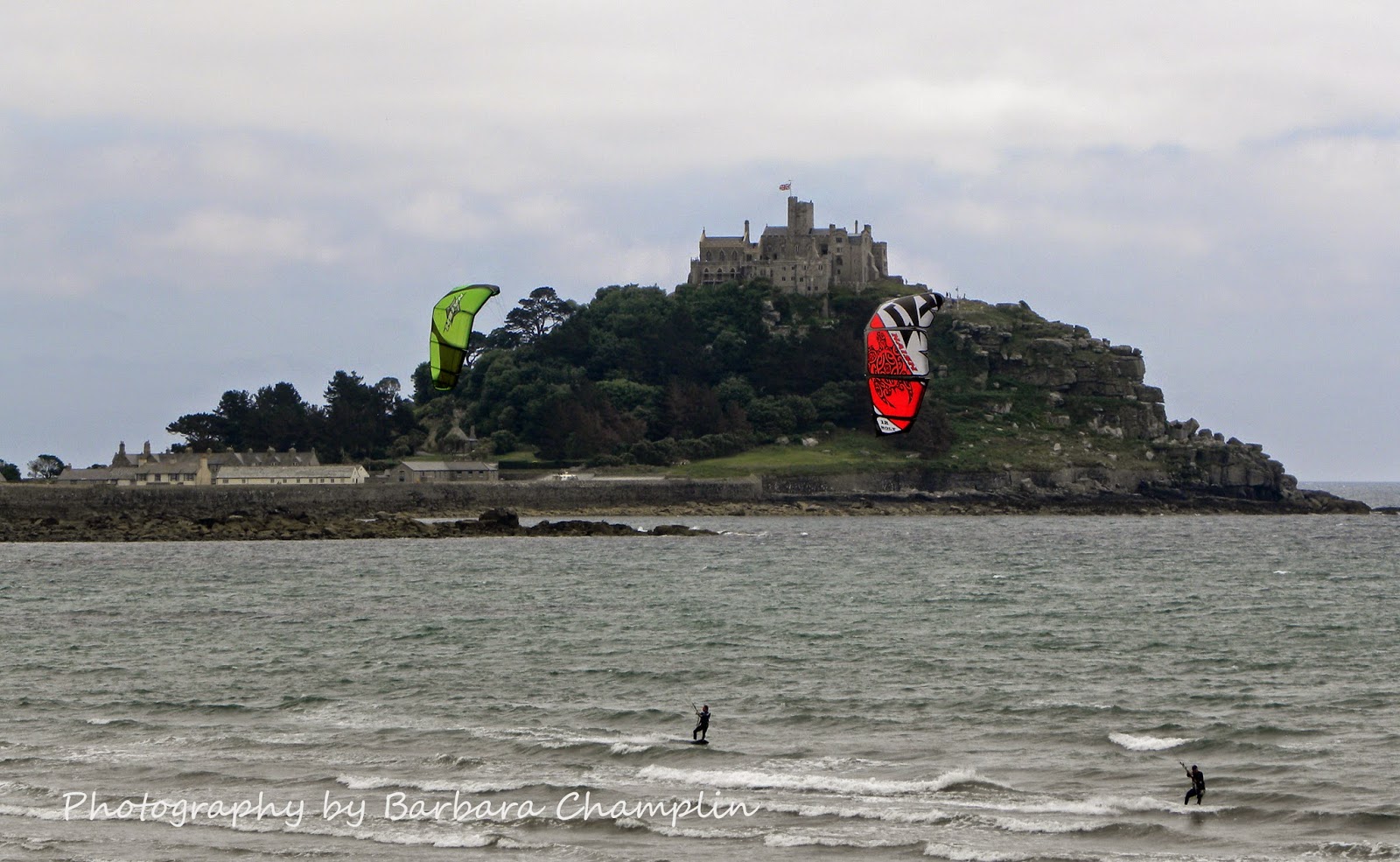 St. Michael’s Mount is connected to the town of Marazion, close to Penazance.
The wind off the ocean make it an excellent place to wind surf! 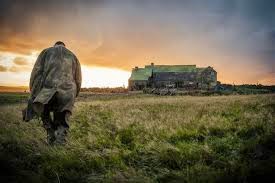 In the past, Cornwall’s income was mostly derived from agriculture, fishing, and, well--smuggling. Dramatized by the likes of “The Pirates of Penzance” and the melodramatic novels of Daphne Du Maurier, smuggling made tax evasion quite profitable due to the accessibility to the Atlantic Ocean and the English Channel. So, it was only fitting that as we crossed the brooding landscape of Bodmin Moor, Stephen played a recording of “Jamaica Inn” by Du Maurier, turning the ride back to Plymouth into a very entertaining experience. The time flew by as we listened to the dastardly deeds of fictional smugglers and damsels in distress playing out on the same wilderness we saw passing by our bus windows.

That evening, we dined in the moors of Devon. After traveling for miles across the wide open spaces of the moor, we finally stopped at the only building in sight--the Warren House Inn. Built in the 18th century to serve the local tin miners, its intimate and welcoming atmosphere now serves mostly tourists. We were met by Peter, our local guide, who immediately took us across the road and up a high knoll. There, hidden from view of the road, with only black faced sheep as company, were 6,000 year old Neolithic tombs and standing stones.  We were all delighted by this unexpected surprise! There are many of these ceremonial sites all over the UK, but we felt privileged to see one that I’m sure few people have ever seen. 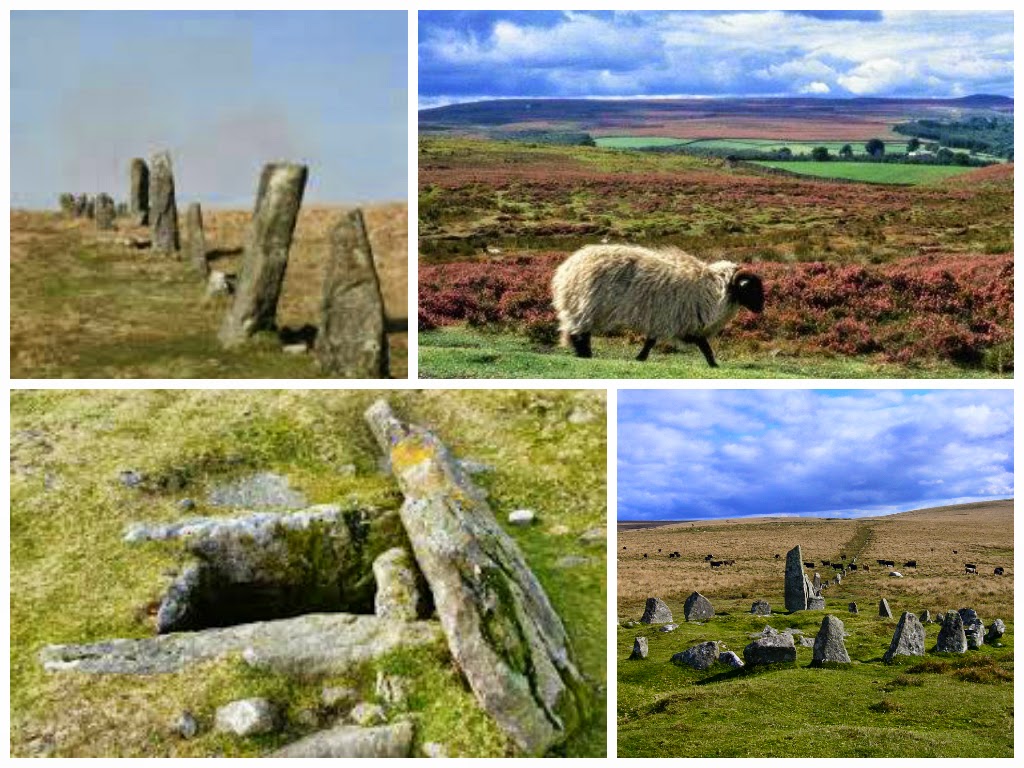 The battery on my camera gave out just as I reached this site, so I have to thank Google
Images for these pictures. (Note to self--always carry your spare battery with you!) 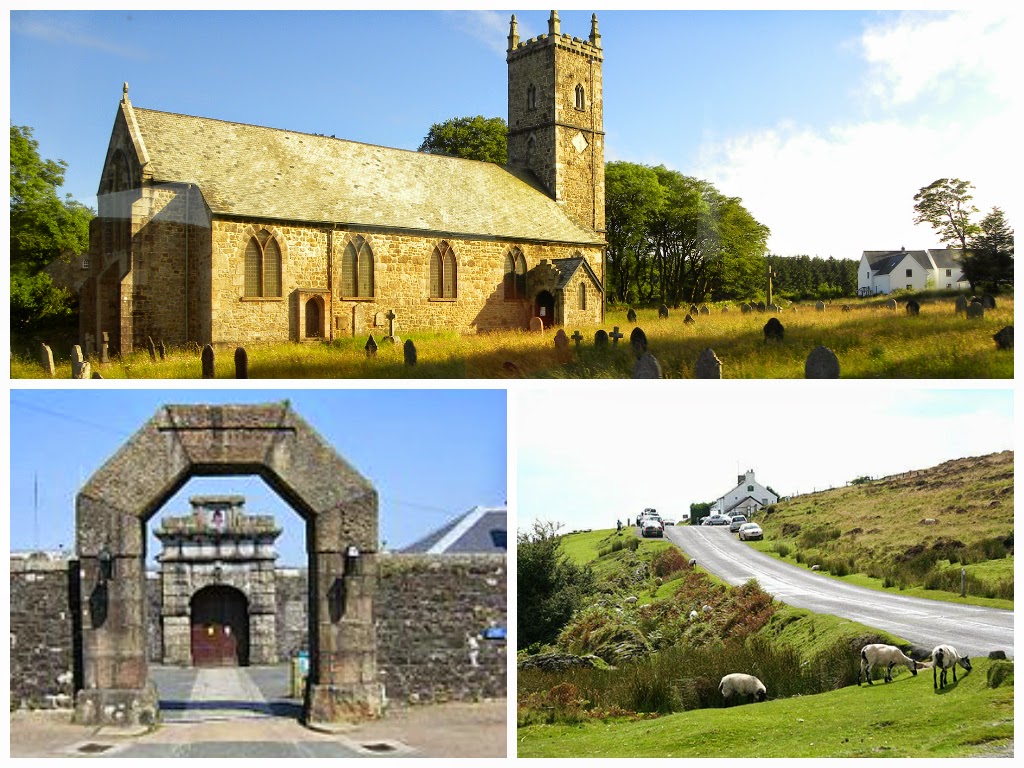 Top: Church of St. Michael, close to the prison, was built by both French prisoners from the Napoleonic War and American sailors from the War of 1812 ( and scene of many a ghost story!) Bottom left: entrance to Dartmoor Prison, built in 1806. Right: Warren House Inn


The Hounds of Hell

”I counsel you by way of caution to forbear from crossing the moor in those dark hours when the powers of evil are exalted.”  From “The Hound of the Baskervilles”  by Arthur Conan Doyle.

If Bodmin Moor was known for its smuggling, then Dartmoor was famous for its ghosts. And, ghosts we got that night, by gum, to everyone’s delight! As day darkened into night and the mist descended on the moors, we settled into our seats, our stomachs filled with good pub food, and listened to Peter spin his yarns.

“Aye, there are tales of ghostly monks carryin’ corpses, and the Devil’s own pack of fire-breathin’ hounds roamin’ the bogs and mires, and disembodied hairy hands sendin’ men to their deaths, but there is one tale that will chill the heart of even the strongest among ya….”

With all the mesmerizing charm of an Irish Leprechaun (or, in this case, a Devon Piskey) Peter wove a tale about a handful of Napoleonic prisoners being marched across the moor from the port of Plymoth to Dartmoor Prison in Princetown. As he talked, I could feel the hairs on the back of my neck stand up…

“It so happened that a blizzard overcame ‘em and the snow was so thick they couldn’t see their hands in front of their faces. The guards knew that to survive, they needed to get help. They ordered the prisoners to stay behind, leavin’ ‘em huddlin’ together in a gully, the snow pilin’ higher and higher around ‘em. They left their little drummer boy behind too, to play a tattoo so they could find their way back by the sound of the beatin’ of his drum. But, when they finally returned, they found the prisoners frozen to death and the little boy stiff and icy. The poor lad still held his drumsticks in his tiny, ice-blue hands.

To this day, farmers, prison guards, and locals alike swear they hear a ghostly rat-a-tat-tat beatin’ out from the gully where the little drummer boy perished, just before snow blankets the moor in a white shroud of silence."

And, with that, we took the long, dark ride back to our hotel….

(Some images courtesy of Google Images)

Posted by theworldaccordingtobarbara.com at 2:59 PM