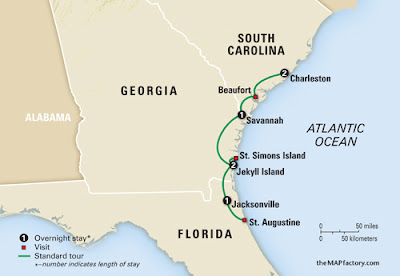 Map of our Southern Charm tour courtesy of Collette Vacations

We left Jekyll Island and headed south, bypassing Jacksonville, to spend a few hours in America’s oldest town, St. Augustine, Florida. We arrived around 10am and it was already hot. The weather had been perfect up to this point, but our luck ran out, weather wise. We milled around for about an hour waiting for our turn to board a trolley hired to give us an overview of the historic district. School children and tourists swarmed the town causing the trolley rides to get behind schedule, and our driver picked us to make up for lost time! As soon as we all settled into our seats she floored the trolley's accelerator pitching us into on coming traffic, scattering wild-eyed pedestrians in every direction. Skidding around corners, we ricocheted off of each other like pin balls while we strained to hear her equally speed-ed up narration...

“St. Augustine was founded in 1565 by Pedro Menendez on your left is the Huguenot Cemetery this is where you get the saying ‘Dead Ringer’ in order to help people from being buried alive a string was tied from their finger to a bell so if they were alive they could be ‘Saved by the bell’ HA HA HA on your right is Castillo de San Marcos the construction on this fort began in 1672 by the Spanish and took nearly 23 years to complete making it the oldest masonry structure in the United States EXCUSE ME LADY THIS IS A PRIVATE CHARTER TAKE THE NEXT ONE directly in front you’ll see The Flagler College named after Henry Flagler partner of John D. Rockefeller he wanted to make St. Augustine a playground for the rich and famous and is responsible for the unique terracotta decorations and red brick accents seen on many of our buildings HEY MISTER YOU’RE NOT SUPPOSED TO PARK THERE PLEASE MOVE YOUR CAR…!” 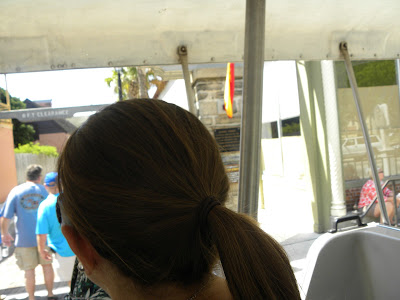 At least I got a good picture of the back of someone's head!

After that unexpected adrenaline rush, Courtney, Leeza and I headed down St. George Street in high spirits discussing what we wanted to see. Our frenetic trolley tour did give us a sense of some of St. Augustine’s landmarks and we remembered a collection of preserved historic homes built between 1790 and 1840 that looked interesting. We decided to hoof the few blocks to see them rather than risk another "Mister Toad's Wild Ride" on the trolley. But unfortunately for me and my feet, we picked the wrong landmark to see. To one who loves historic grand mansions, these were just a sad little group of decrepit frame houses that had seen better days. One even looked like it was about to topple over! 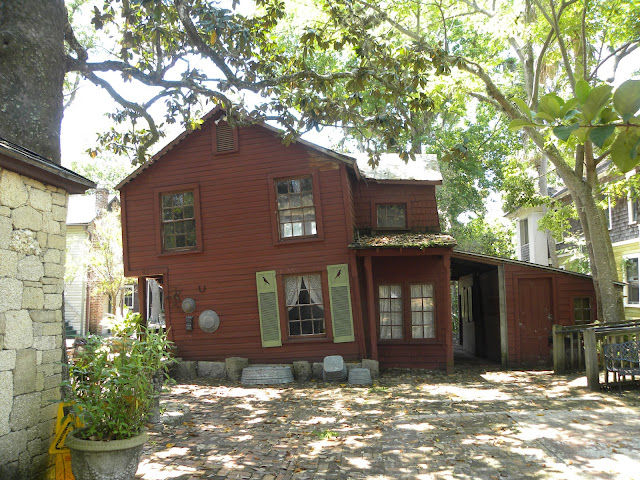 I liked this one best of all. It reminded me of a crazy house in a carnival.

I really wanted to see the fort, Castillo de San Marcos but it was literally crawling with bus loads of school kids. Besides that, I had stupidly worn the wrong shoes and I could feel blisters blossoming on my feet the size of silver dollars. It was also good and hot by that time, so we slowly walked back up St. George Street going in and out of air conditioned boutiques enjoying an ice cream along the way. It was actually not a bad way to spend the rest of our afternoon; nothing wrong with a little shopping and eating. Next time, though, I'll put the fort and the Lightner Museum at the top of my list of things to see. 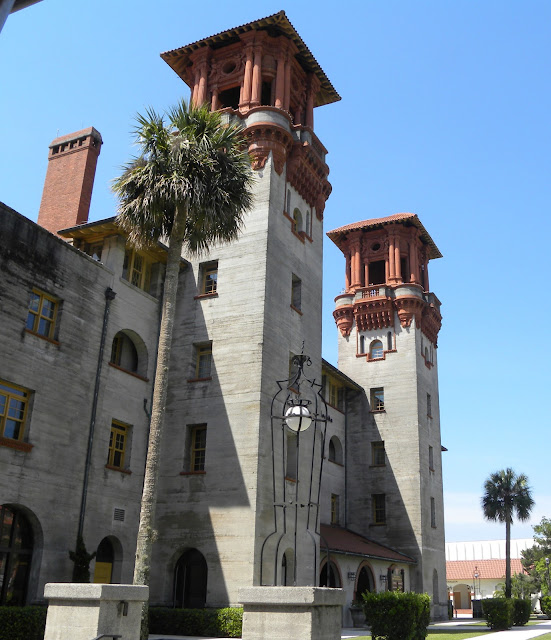 The Lightner Museum, former grand hotel at the turn of the last century.
Great example of the terracotta and red brick accents on many of the buildings
in St. Augustine. 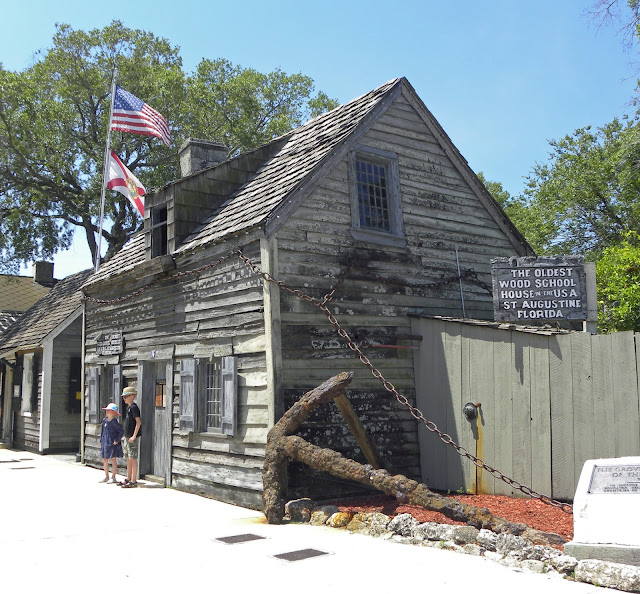 The oldest wooden school house in the United States. 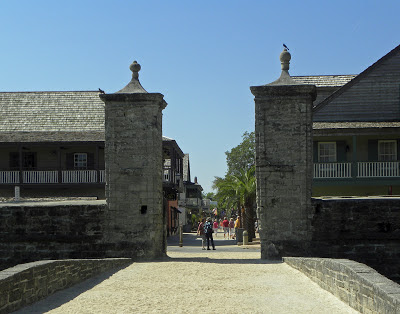 The original gates into the fortified town of St. Augustine. The pillars were
the supports for the drawbridge over the moat. St. George Street is behind. 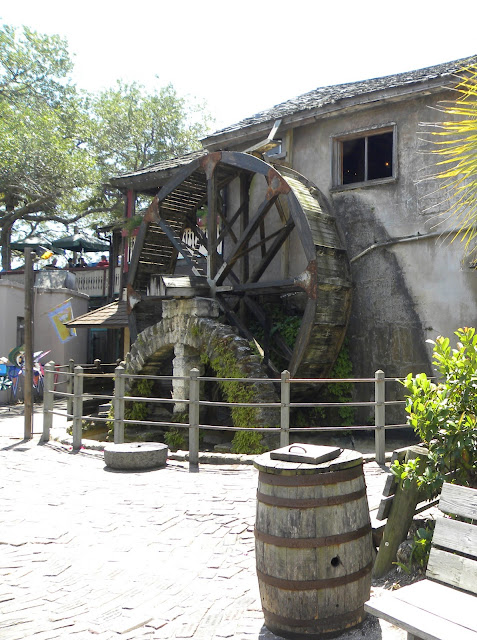 Scenes along St. George Street in the historic district. 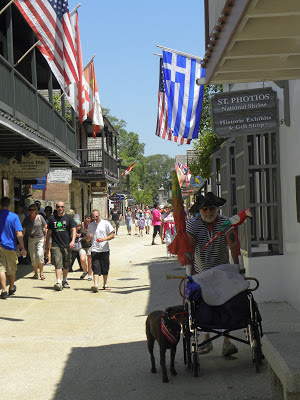 Back on the bus, we traveled north to Jacksonville where we would spend the night and fly home the next day. The tour ended with dinner by the St. Johns River. The night air was warm and the walk back to our hotel by the river was a lovely ending to a very satisfying tour. 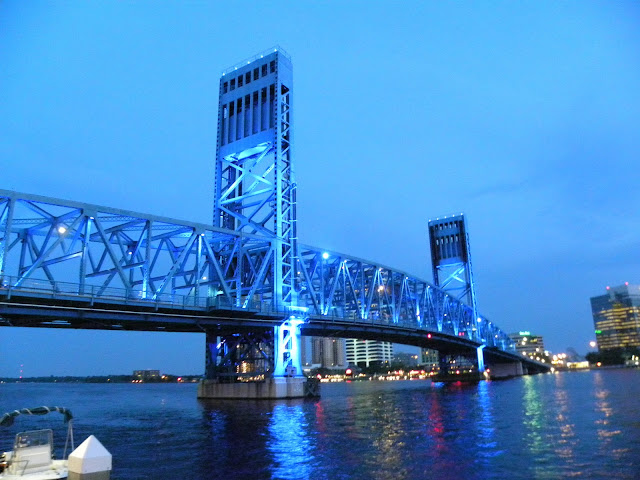 The view on our way back to the hotel after dinner along the St. Johns River in Jacksonville. 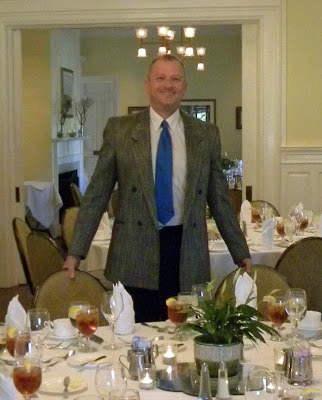 Our Tour Manager, Curtis Evans. Thanks, Curtis for "herding" your flock so well!

**Double click on any picture for a full screen slide show.
Posted by theworldaccordingtobarbara.com at 10:31 AM