THE VINE THAT ATE A HOUSE

In the green rolling hills of Sierra Madre, California, grows a plant of gargantuan proportions.  It is a huge sprawling wistaria vine, which covers over an acre of land.  It is so big, in fact, that the Guinness Book of World Records has crowned it the world's largest blooming plant.  It even has it's own coming out party held every year on the same day come rain or shine.  Unfortunately, it was rain this year--torrents of it.

Sierra Madre is a beautiful little town tucked in the hills above Pasadena, and on March 25th of each year it celebrates its main claim to fame by hosting the annual Wistaria Vine Festival.  We decided to go even though rain by the buckets had been predicted to put a damper on the festivities.  Fortunately for us, it was just sprinkling as we rode the shuttle from downtown to the quiet residential street where the Vine resides.  Once there, we walked up a short hill, turned into a modest gate and there it was:  a massive collection of gnarled vines, some the size of small tree trunks stretching from support pole to support pole that seemed to have no end.  Did Alice Brugman have any clue that the Chinese Wistaria she bought for $.75 in 1894 to beautify her new home would ever turn into this?  She must have been fascinated as her jack in the bean stalk plant flourished under her care, eventually growing to cover nearly two acres of ground at its peak.  Although her fascination must have turned into horror when in 1930 her vine on steroids essentially ate her house, crushing it with all of its 250 tons!

Sadly the Vine got a little puny after that, perhaps from guilt, and experts were brought in to prune it back to the size it is now and pump it up with vitamins.  Sadly for us, because Southern California didn't really have a winter, the Vine bloomed its head off two months early, which left us to admire the few spent blossoms that still hung around.  Mother Nature, it seems, is no respecter of festival organizers. 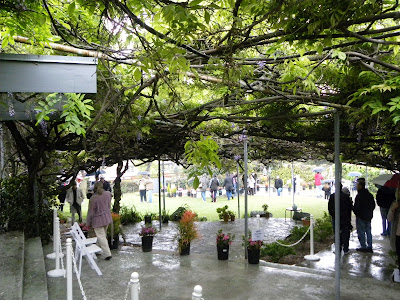 The Vine spans two adjoining properties and creates a pleasant canopy of blossoms.﻿ 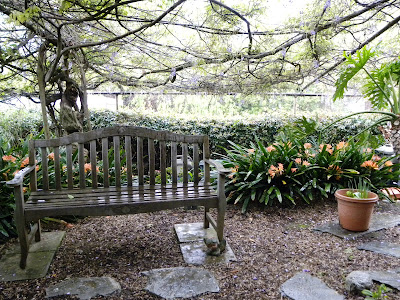 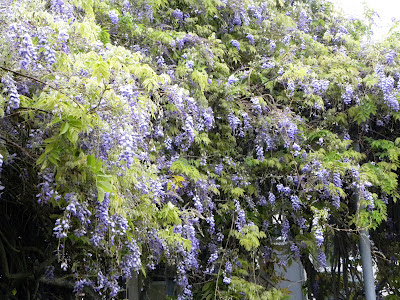 The wistaria vine was named in honor of Caspar Wistar (1761-1818), an American
physician.  Hence the correct spelling is wistaria and not wisteria.﻿ 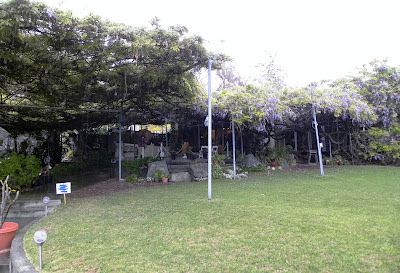 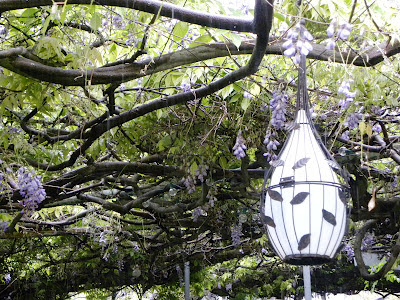 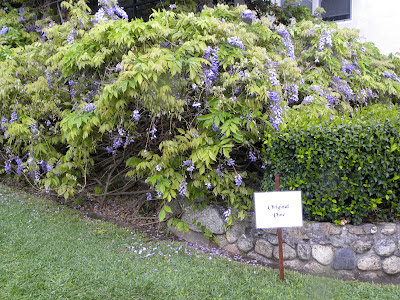 This is the original vine that ate the house!﻿ 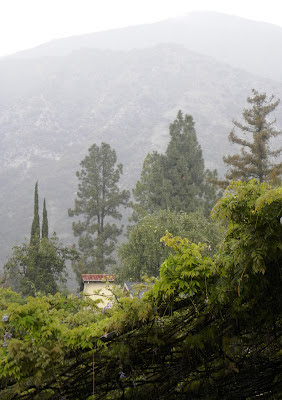 A look back across the yard towards the hills.  It reminded me of
an Italian Tuscan landscape. 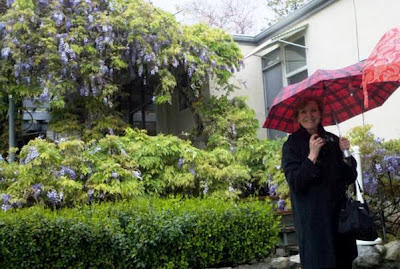 The day brought back memories of my two weeks in Scotland.  I never got out of my rain coat and I became adept at taking pictures with one hand and holding my umbrella with the other.

By the time we boarded the shuttle to go to the next Sierra Madre landmark, the drizzly rain had turned into a fairly serious downpour.  However, as we pulled up in front of a beautifully restored  Queen Anne Victorian, we were glad we braved the weather.  The stately Vic was built in 1887 by Dr. Elbert Pinney as a 24 room hotel to serve guests traveling from the east to buy land and enjoy the mild winters.  Originally named the Hotel Sierra Madre, rooms were a steal at $8 to $12 a week including meals, but the potties were outside with a crescent on the door.

Over the years the "house" has had many transformations from hotel to boarding house, apartments, a sanatorium (where Jimmy Durante once came to dry out) to the current private residence of Judy and Greg Asbury.  They bought the old Girl in 2003 and have lovingly restored her to her former glory.  They've opened up cramped spaces that had been walled off when it was an apartment building and renovated it to contain 12 bedrooms and, thankfully, 11 luxurious baths each with its own claw foot tub. 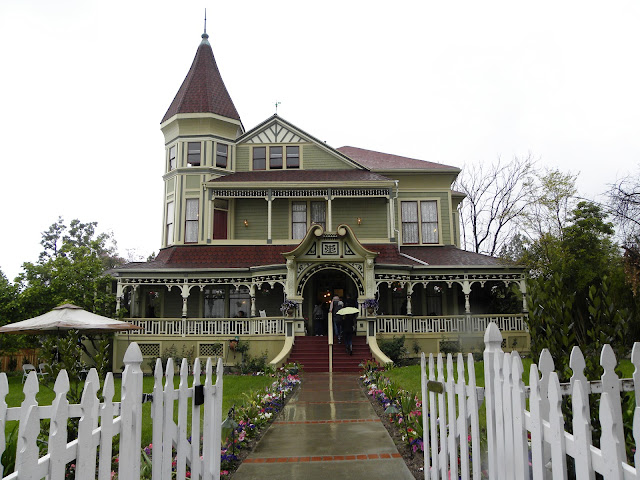 The Asbury's plan to list their Treasure of the Sierra Madre home for sale soon.﻿ 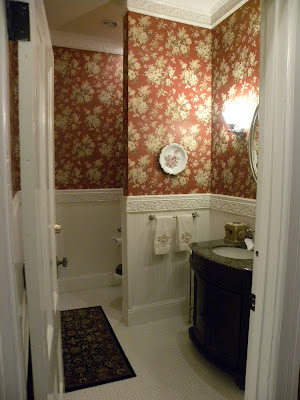 The powder room off the main entry.﻿ 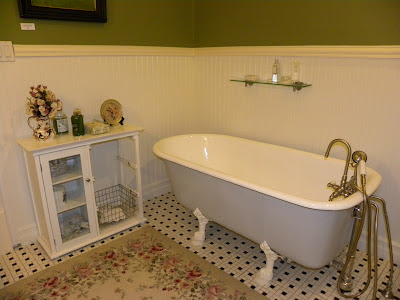 One of the eleven bathrooms.﻿ 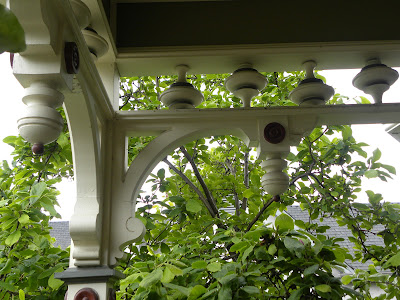 There is a spacious screened in porch to the right with a belt driven fan, comfortable
chairs and a lovely view of the gardens..This is my favorite room in the house.  I'm sorry
I didn't get a good picture of it. 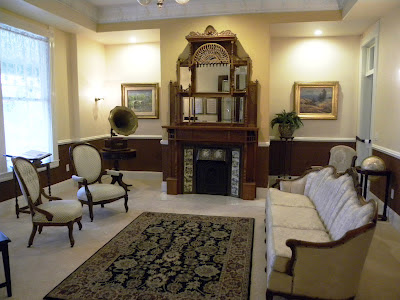 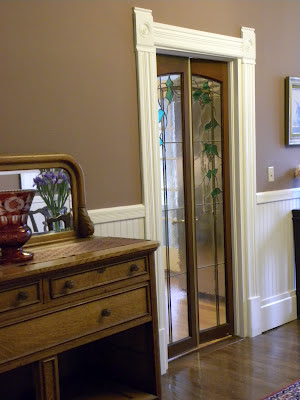 Door to the kitchen off the dining room.  The kitchen has been fully moderniied.﻿ 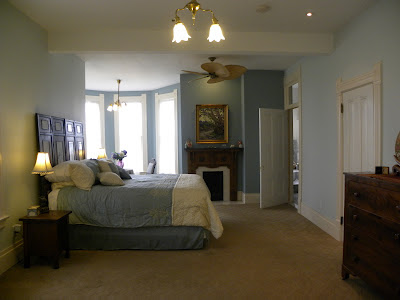 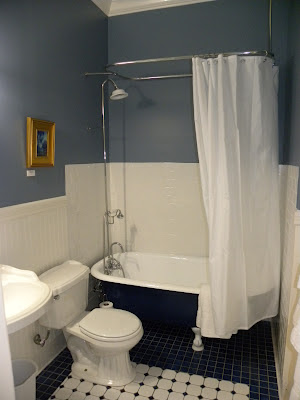 You can see I was taken with the baths.  Great attention to detail and the period.﻿

We took the shuttle back downtown and had lunch.  Afterwards, ready to enjoy the rest of the festival,  we discovered that all of the vendors had packed up their tents and had gone home.  I felt badly for them.  The one day of the year the skys had to open up and pour down like a biblical deluge, it had to be on Festival day.  I spoke to the owner of the Pinney House and he said, "If you think this is bad you should have seen it last year!"  Rained out two years in a row.  Good grief.
Posted by theworldaccordingtobarbara.com at 11:25 AM