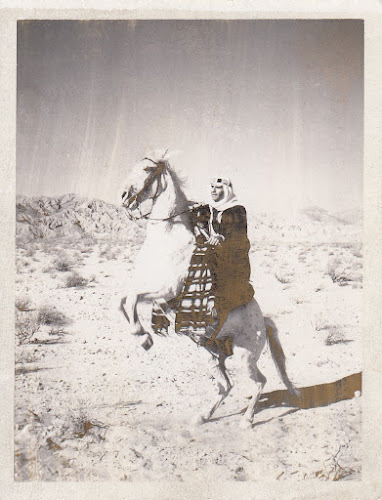 Bob Moran was my kind of guy—a fearless adventurer and explorer who traveled the globe making films about a world less known. He was a scientist and an educator, and above all, a consummate dare devil taking risks most of us would have nightmares about. Until one day, he pushed fate too far… 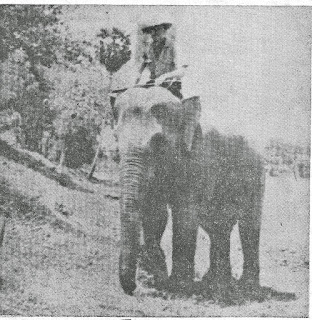 With all Bob's accomplishments, nothing compared to the passion he had for adventure and exploration. A risk taker to the extreme, he had lived with head hunters in Borneo and gone river rafting on dangerous rapids on an unexplored portion of river in Guatemala. He rode elephants in Africa and Arabian stallions in Syria. He was quoted as saying, “I borrowed a horse from a Bedouin sheikh and visited Bedouin villages and tents camps. I traveled by horse, camel and foot, both alone and with Bedouin tribesmen. Every time I met a sheikh, I was given an Arab head gear. Offers of other gifts and hospitality were overwhelming.” He filmed his adventures having many broadcast on national TV.
His day job was as Curator of the Atmospherium- Planetarium on the campus of the University of Nevada in Reno. However, he was well on his way establishing a new career making adventure films. He made several that were shown on Bing Crosby's show, "Across the Seven Seas". One was entitled "Solo Safari" about his safari and Syrian trip. Another of his films featured his trip with several anthropologists and other scientists to search for ancient Mayan Culture. Entitled, "The Run of the Rio Grijalva". 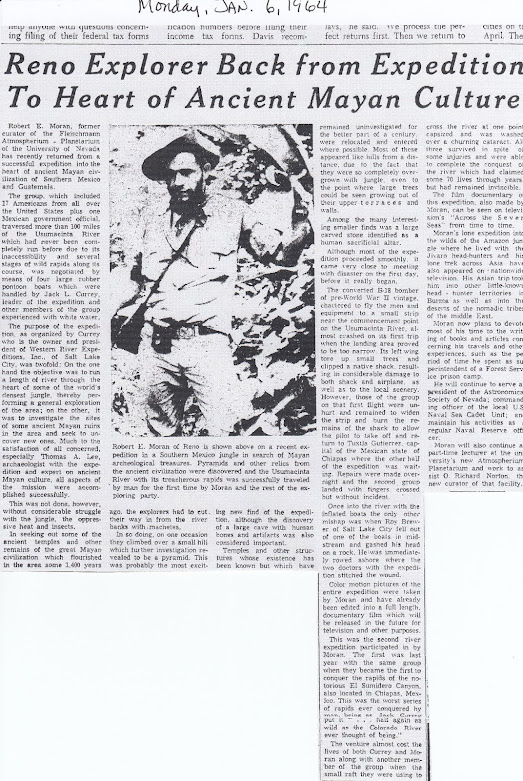 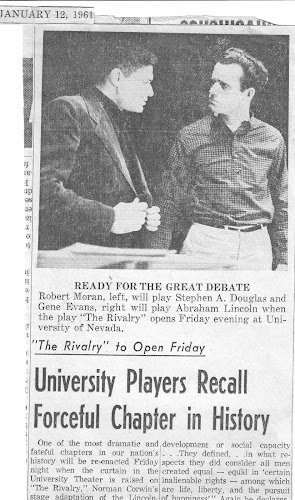 My first memories of him was as Stephen Douglas in “The Rivalry”, a two man play about the Lincoln/Douglas debates performed at the University of Nevada, Reno theater. Ruggedly handsome he commanded the stage, however his star power with me lay in the fact that acting was just a pastime; science was his occupation. As Curator of UNR’s Fleischmann Atmospherium-Planetarium, he lectured about the wonders of the universe at the spectacular new facility built on the University campus. And when he gave lectures about his adventures, showing his films, I attended them all. To me, Bob had all the charisma of a movie star.

He asked me out a few times but I was so star struck I can’t remember anything we said to each other. I just remember vividly that he seemed gentle and sympathetic. Chances are, sensing my nervousness, he let me do all the talking. I was 21 and a Junior in college, and he was a 34 year old man of the world. His interest in me was puzzling to say the least. In retrospect I guess as a man who liked to live on the edge, his choice of women shouldn’t have been a surprise. They were certifiable beauties; he chalked up beauty queens like trophies. Me, I had been a beauty queen of sorts; I was runner-up one year in the Miss Nevada contest and had a reputation as a skilled actress and director winning accolades in the Theater Department. It also could be that we were just window dressing, but it doesn’t matter. I can’t imagine he would spend time with people he didn’t like.

Bob was frequently out of town and my life went on. I met a man in the later part of my Senior year, he proposed, I accepted and then Bob came knocking at my apartment door. He looked like he just stepped out of the jungle, tanned, sweaty and (I think) still wearing his bush hat! My finance was there and introducing them was the hardest thing I have ever done. I desperately wanted to give back my new ring and call off the wedding. But, I didn’t.  It was too late. What I will never forget and will always hold in a secret place in my heart is the look of disappointment on his face and his reluctance to leave. Because at that moment I knew.... Two years later, Bob was dead.

My husband and I lived in Las Vegas by then. I worked as a full time model for Cleopatra’s Dress shop in Caesar’s Palace and my job was to stroll through the coffee shops and lounges modeling clothing from the shop. I started chatting with a couple I met and when I found out were from Reno I asked them if they knew Bob Moran. I was stunned when they told me he had been murdered on his second expedition into the heart of Guatemala. Guatemala had been in a violent civil war for several years and Bob had gone into the very center of the fighting. Why?? Why had he risked his life like that? Was it because two years earlier he and his expedition had had no problems when they had been in the same general area? He clearly died doing what he loved, what he lived for, but too young...too young.

His memory haunts me still. Perhaps it is because there were dreams that were never finished, hopes that didn’t dare, things unsaid, undone. He wanted to write the story of his life but died too soon. He still wants to be known. He wants to be remembered and he wants me to tell what I know.

I’ve done my best, Bob. You will never be forgotten.

Who he was and who he aspired to be… 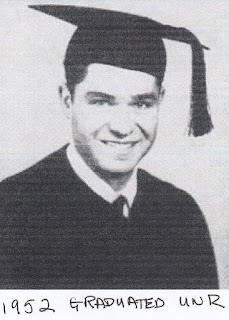 Robert Ernest Moran was a true Renaissance man. Trained as a physicist, he was also an explorer, an adventurer, an educator and a film maker. A natural leader, he commanded any room with his quiet confidence. But, it was his kind spirit that was most appreciated by those who knew him.

He was born in Jamestown, N.Y. on September 21, 1939 to Jocelyn (aka Jeane) and Robert E. Moran. His only sibling was Michael J. Moran. It is unknown when Bob came to Reno, Nevada. Records show he attended the University of Nevada at Reno, graduating in 1952 with a Bachelor of Science. He was a member of the fraternity, Phi Sigma Kappa, and frequently acted in plays both as an undergraduate and as a graduate, receiving good reviews. He continued his education at UNR and earned a Masters Degree in Physics. He then served as Curator of the Fleischmann Atmospherium-Planetarium at the newly built facility on the UNR campus until 1964 when he left to continue a new career as an adventure film maker. He was also elected President of the Reno chapter of the Astronomical Society. His military experience was as a Lieutenant in the US Naval Reserve.

His passion for adventure and film making, always pushing fate to the edge, sadly cost him his life. His second expedition into the depths of Guatemala in 1966 resulted in his death. From 1960 through to 1966, there had raged a violent and bloody civil war killing over 200,000 men, women and children.  Bob had been lucky with his first trip into this dangerous place two years earlier. Why would he chance going back into that area again will never be known. Perhaps he thought his good luck would hold, but it didn’t. He was brutally murdered around September 19, 1966 in Rio Hondo, Zacapa—the very center of the conflict. He was just a few days away from his 38th birthday.

His body was sent to his mother who buried him in Reno, a place he had called home. His gravestone reads simply:  Lt. USNR/ A New Land to Explore.

Posted by theworldaccordingtobarbara.com at 12:13 PM